Between 15 and 16 inches might be the most common laptop size, but if you’re looking for a desktop replacement you probably want a bigger screen. This is where the 17.3in Dell Inspiron 17R comes in. Available in a wide range of configurations, with processors from the old mobile Pentium to the latest Core i5, it caters to a variety of price points and is available in Mars Black, Peacock Blue and Tomato Red (yummy). 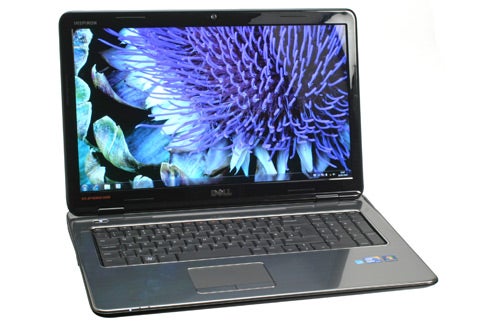 Our black NOON7018 model resides at the high end of the scale, coming with a dual-core Intel Core i5-450M processor that runs at 2.4GHz (or up to 2.66GHz maximum Turbo clocked) and supports hyper threading for four virtual cores. It’s backed by 4GB of DDR3 RAM, optimally utilized by a 64-bit version of Windows 7 Home Premium. For storage you can go with either a 320 or 500GB hard drive depending on your needs (the latter costs £30 extra).


The 1,600 x 900 display is driven by a discrete ATI Mobility Radeon 5470 graphics card. This brings DirectX 11 compatibility and, though its gaming prowess is negligible, at least it will do a great job of video decoding and acceleration for supported applications.

In terms of connectivity and expansion the 17R is very generous. Video is catered for by HDMI and VGA outputs, while headphone/digital and microphone jacks take care of audio. There are no less than four well-spaced USB 2.0 ports (two at the back, two at the sides), one of which doubles as eSATA. USB 3.0 is regrettably absent, but it can at least be added using the 34mm ExpressCard slot. Blu-ray is not an option, though of course you do get a DVD-Rewriter, and wireless communications are handled by Bluetooth and 802.11n Wi-Fi. Overall it offers pretty much what the average consumer needs.


When it comes to looks, the 17R retains the fresh design language successfully applied to the Inspiron M101z, and it loses none of its appeal here. Though as fingerprint-loving as ever, the lid’s finish offers an appealing brushed metal effect under a glossy transparent layer. It’s certainly attractive, though we really wish the company had just left the glossy part off altogether – we far prefer a low-maintenance finish as found on the Sony VAIO F12, or of course a real brushed metal lid like on the HP Pavilion DM4. 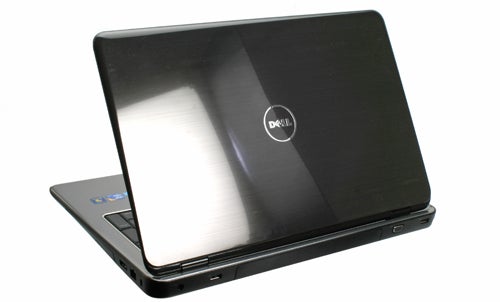 Another unusual touch is that the thin lid isn’t as deep as the chunky base, which thus extends to show off some of its silver finish when the machine is closed. Similarly to that of the lid, this is a brushed metal effect covered by a glossy transparent veneer. It’s very eye-catching, especially when combined with the Inspiron line’s new minimalist aesthetic, which presents a unified keyboard surround broken only by the curved, white-backlit power button. Unfortunately, it also means this laptop commits the capital sin of having glossy palm-rests, an annoyance we had hoped was reserved for older Toshiba Satellite machines.


Thankfully all the plastics feel very solid indeed, and there’s nary a hint of creaking or unwanted flex. Overall then, the 17R is very attractive and well-built, albeit somewhat high-maintenance.

Much like the M101z, the 17R has an outstanding keyboard – in all likelihood the best in its class. The matt black, tile-style keys are large and very comfortable indeed, with just the right spacing. Its layout is great and includes a full number pad, though secondary functions are all relegated to the top F-keys and are actually the default function. This is always a matter of taste, but if you don’t like it you can change the setting in the BIOS.

In use the keys offer truly excellent feedback with no flex whatsoever. There’s more travel and a more solid feel than on any of the ‘chiclet’ or isolation-style keyboards most laptops sport these days, and keys offer just the right amount of give, pressure and crisp response. This is one of the few laptops we’d be perfectly happy using for hours-long typing sessions.


For a change, even the touchpad and its buttons hold up beautifully. The large pad supports multi-touch and is flawlessly sensitive, but its positioning prevents it from interfering with typing. Its matt surface is a delight for the fingertips, while the large buttons below it are every bit as pleasant to use and crisp as the keyboard’s keys. Where input is concerned, the R17 is unrivalled. 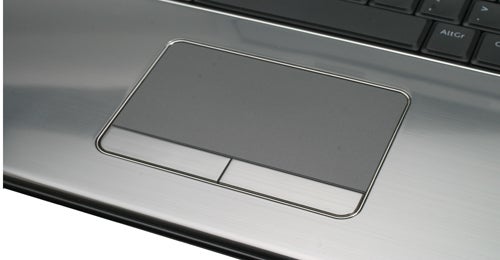 The 17.3in screen’s 1,600 x 900 pixels might not match the Full HD resolution of the last laptop we looked at, Sony’s VAIO F12, but then it’s considerably cheaper, will still display 720p HD video and means you won’t have any problem making out text or icons, especially since sharpness is great as usual. There’s little sign of banding or backlight bleed, and dark detail is good at the cost of white differentiation. On the negatives side there’s some visible dithering, and both horizontal and vertical viewing angles are somewhat sub-standard, but not to a distracting extent. Just keep in mind that this is one laptop screen where you’ll suffer quite a bit of colour and contrast shift if viewing from much of an angle.


Onto the speakers, the 17R carries SRS audio processing, which does a reasonable job of boosting the audio output. What they lack in clarity, the speakers more than make up for in dynamism, relatively punchy bass and sheer volume, all combining to create an immersive sound-stage for films and games. Unless you’re listening to classical music, this is one laptop where external speakers or headphones are not required, and for any but the most discerning listener nearly matches the harman/kardon efforts found on the likes of the Toshiba Satellite A660. 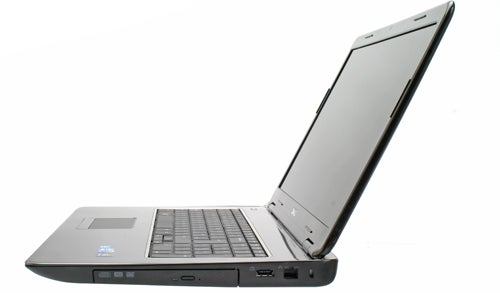 On the topic of noise, the 17R is mostly silent when idle, though occasionally the fan does rev up to match the audible but not annoying whoosh it produces when under load.

Even if you go for the Inspiron 17R’s relatively low-end Core i3 option, that should be plenty of power for what the average consumer will want from a laptop like this, and the 2.4GHz Core i5-450M will certainly handle almost anything with ease. It’s worth noting that, unlike the model available to buy from Dell, our review sample has a slower 430M running at 2.27GHz, so the Core i5 machine you get will perform slightly better than our results.

Against the competition the 17R does pretty well, beating both the Core i3-toting Toshiba Satellite A660-14C and the Samsung R780, which sports the same CPU and RAM. Ultimately this is a system that fulfils the desktop replacement criteria perfectly, as it will cope with day-to-day multitasking, HD video editing and photo manipulation with few discernable problems.

It would be a stretch to call the 17R’s top graphics option – the AMD/ATI Mobility Radeon 5470 of our review sample – a gaming card, but it will just about handle older and less demanding titles at the laptop’s native screen resolution. However, even at 1,366 x 768, something a little more high-end like STALKER: Call of Pripyat wasn’t playable. Some compromise on settings may get you playable frame rates, but the drop in image quality will be noticeable.


Unfortunately there are no switchable graphics available, so the discrete graphics do have a negative impact on battery life. The most you can expect to get from the 17R’s six-cell (48 Watt-hour, 11.1V) battery is around three hours, but to be fair that’s not bad for a desktop replacement laptop and is likely as much as you would need.

In the intensive DVD playback test this Inspiron managed just under two hours, and considering the screen remains perfectly legible at half of this test’s 100 percent brightness, you should be able to get a bit longer from it. The reason Samsung’s R780 lags behind here is its more powerful discrete graphics which, as you can see in the gaming tests, do have an appreciable impact.


Dell can usually be relied on to offer great value for money, and while the 17R isn’t quite the bargain we’ve come to expect from the third-biggest laptop maker in the world, it does hold up fairly well against the competition. The Toshiba Satellite A660-14C, for example, might offer a Blu-ray drive, but it also sports a slower, cheaper processor, a lower screen resolution, lacks Bluetooth and isn’t as comfortable to use. A bigger, Intel-based cousin to the award-winning HP Pavilion DV6, predictably called the DV7, is also available with identical specifications to the 17R at an identical price, but as we haven’t reviewed the DV7 range recently we can’t recommend one over the other.


If you can live with its glossy finish inside and out, Dell’s attractive new Inspiron 17R is a decently-priced desktop replacement offering a superlative typing experience.