In these financially troubled times, the budget sector is more important than ever. Considering it’s a notebook from the world’s third-largest PC manufacturer, Dell’s Inspiron 1545 (also known as the Inspiron 15) has a lot to live up to, especially since the last Inspiron we had through our labs, the Inspiron 1525, walked away with our coveted Recommended Award. Let’s find out if the 1545 is worthy of similar praise.


As with many new budget notebooks, Dell’s latest is available in a few different colours if purchased direct. Matte Black is standard, but for an extra £29.99 you can choose Microsatin Blue, Red or Pacific High-Gloss Blue lids. Not exactly much choice, especially given Dell’s usually prolific customisation options, but any choice is better than none. Our particular model, available from PC World for £429.99, came with a blue ‘high-gloss’ lid. While not quite as bad as piano black at showing fingerprints, it will still require regular attention and there is no cloth provided for this. 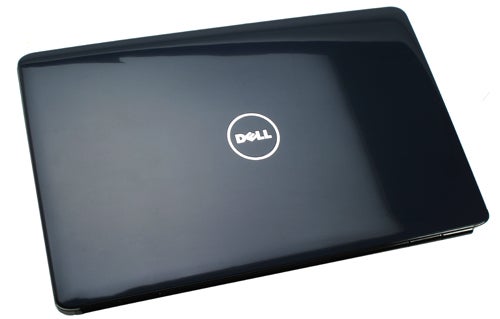 Opening the notebook up is even worse, since aside from the notebook’s sides, keyboard and touchpad every visible inch is glossy black. While this shiny finish looks attractive, every time you type or use the touchpad your notebook will display streaks and prints. There’s not even any kind of pattern à la Toshiba A350-11N or HP HDX 16 to somewhat disguise this effect. After just a day in the office, the 1545 looked like it had been sitting out for a week. Semi-matte palm rests might not have looked quite as flashy, but they would sure require a lot less maintenance. 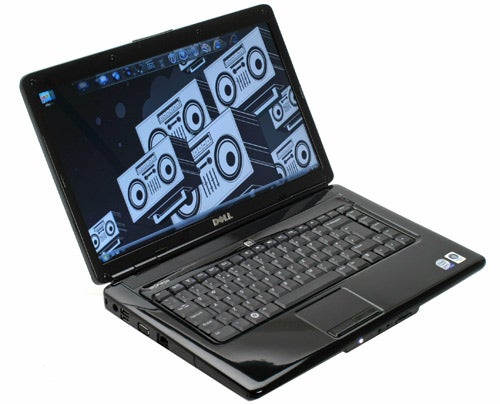 Aside from this, the design is streamlined and minimalist. Apart from the keyboard and touchpad, the only things breaking the Inspiron’s clean lines are a speaker grille and small square chromed power button above the keyboard. In the first sign of the 1545’s budget nature, there’s not even a webcam to spoil the screen’s slick bezel. To be honest, this is a bit of a harsh omission even on a notebook available for around £400 since even the cheapest netbooks come with one. And, though Dell offers a 1.3 Megapixel model for upgrade if buying the 1545 direct, it charges a hefty £30 for the privilege.


Thankfully, build quality doesn’t show any signs of such severe cost-cutting. All the plastics used feel very solid and there is no sign of extravagant flex or creak. Connectivity, though, is another area that has been seriously affected. Aside from the usual DVD-Rewriter and memory card reader, we have a 34mm ExpressCard slot rather than the more usual 54mm version. In addition there are headphone and microphone jacks, three USB ports, an Ethernet port and VGA-out. One could argue that this is no more than most people will need, but just to put it into perspective, the latter list is no better than what you’d find on a netbook and even the Inspiron 1525 managed to include an HDMI port.

As has become the fashion, the 1545 has a slightly-recessed wide-aspect touchpad and its matte textured surface is pleasant to use. Its buttons, meanwhile, though a tad noisy, are well-positioned and feature good feedback. 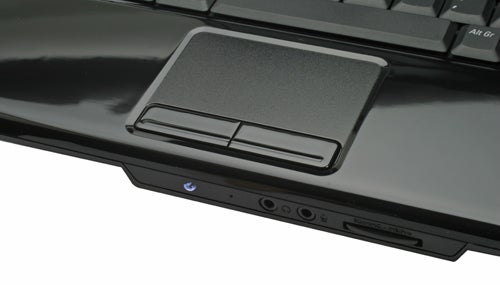 Thankfully, Dell hasn’t done much to alter the keyboard and it’s pretty much identical to the excellent one found on the Inspiron 1525. Keys have a pleasant matte surface and are shaped well. Though feedback is a little light, it’s quite deep for a notebook and has a nice positive ‘click’ to it. Layout is also excellent, the only quirk being that the special functions (such as volume up/down, wireless on/off, etc) on the F1-F12 keys are now the default action, with the F1-F12 functions themselves being relegated to secondary status and requiring the Fn key to be pressed. This probably makes life easier for computer novices, but will doubtless cause anyone who uses F-key combinations regularly no end of frustration. 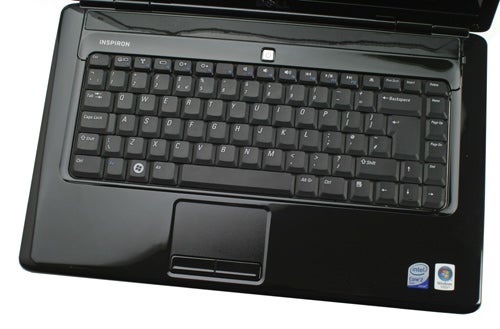 Dell’s Inspiron has joined the 16:9 aspect ratio crowd, as the 1545 sports a glossy 15.6in 1,366 x 768 screen. It’s a somewhat below-average display overall; though it doesn’t suffer from banding or excessive backlight bleed, text isn’t quite as sharp as we’re used to and terrible viewing angles means its contrast performance is often pretty poor too. In terms of entertainment, however, if you can get past the reflections in a lit environment and are looking at the screen from the ‘ideal’ angle, it certainly does an adequate job even with dark material.

The speakers also strike a positive note. To be honest, they sound a lot better than the rubbish we encounter on most budget 15-16in notebooks. They do lack some depth and obviously bass doesn’t have the kind of punch the best notebook speakers provide, but everything comes across with surprising vibrancy and without distorting at either end of the range.

So what kind of internals does the 1545 hide under its plain but glossy shell for its bargain price? Well, they’re actually a little better than you might expect. The cast is led by an Intel Core 2 Duo T5800 running at 2.0GHz with an 800MHz front-side bus. This is fast enough to easily handle any software you’d want to use on a notebook like this. As to memory, 3GB of DDR2 RAM is as much as the installed 32-bit version of Windows Vista Premium can handle. 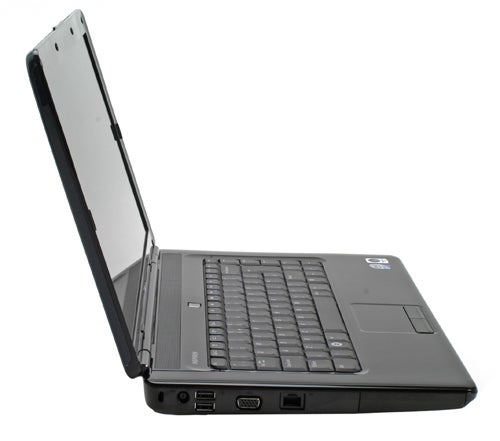 Intel integrated GMA4500 graphics are as poor for gaming as ever, but should cope with most everything else without problems. Meanwhile, storage is handled by a 250GB 5,400rpm hard drive, which is plenty of storage for normal use. Of course, you can’t expect Bluetooth or anything beyond Wireless-G, though we’d hoped for it anyway. A slower wireless standard won’t make too much difference for many users, but Bluetooth is becoming ever more prolific and its absence is regrettable.


When it comes to software, the Inspiron 1545 presents a very clean desktop, with an eBay shortcut the only obvious sign of bloatware. Dell’s Mac-like launch-bar is also an attractive and useful addition to the standard Windows Vista UI.

Finally, we come to the 1545’s Achilles heel: its battery life. This Inspiron has the undistinguished honour of failing to complete the Productivity benchmark because the four-cell battery ran out before a single iteration could complete. In the non-intensive Reader test it managed a pathetic 89 minutes, compared to the usual minimum of 150.


To put this into even bleaker perspective, the recently reviewed Toshiba Satellite A350-11N (which despite being more expensive is also a budget notebook) managed 201 minutes in the same test. As usual another battery could be purchased separately, but out of the box the 1545 will disappoint even the least demanding of users with its lack of longevity, while there is no shortage of deals out there for notebooks that cost around the same but offer more features. 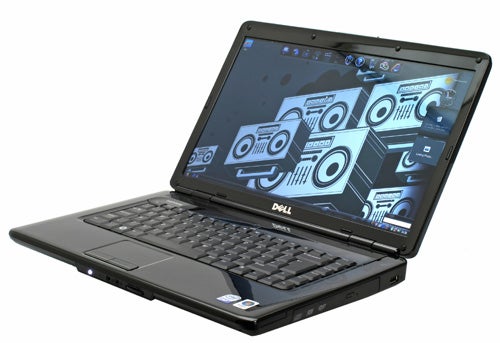 
In a nutshell: if you’re looking for a cheap and simple family laptop with reasonable speakers, the Dell Inspiron 1545 is worth considering. However, appalling battery life really hampers an otherwise solid but unspectacular effort that is inferior to the model it replaces.