Updated: Dell has just announced that it’s bringing IPS panels to all Inspiron 15 7000 Gaming models in the coming months at no extra cost. This is a huge deal, because the current TN screen is by far the biggest problem with what is otherwise a great product. As soon as IPS models become available I’ll get one in for review and update this piece.

The Inspiron 15 7000 Gaming is Dell’s latest effort to capture the super-competitive £1000 gaming laptop market. It comprises two models, one that sells for £900, and another costing £1100 thanks to its beefier graphics hardware, larger memory and more generous storage.

This is by no means a perfect laptop, and the screen in particular is heavily compromised. But for those who can accept a few shortcomings, the Inspiron 15 7000 Gaming is a solid gaming laptop.

One thought that will repeatedly occur to anybody who owns an Inspiron 15 Gaming is how ‘old-school’ it is. And this laptop’s retro feel can be seen as both a good and a bad thing, depending on who you are and what you need.

It looks like a bit of an oddity. Since Dell couldn’t just put the word ‘Gaming’ in the product name and leave it at that, the design features red highlights on both the lid (the Dell Logo looks strange in red) and on the front edge, in the form of tessellating triangles.

The rear hot air vents, too, receive red metal highlights and are shaped out of plastic. I quite like it, although I do wish Dell had also provided the option of a plain black model for those who don’t feel the need to show off their gaming virtues. 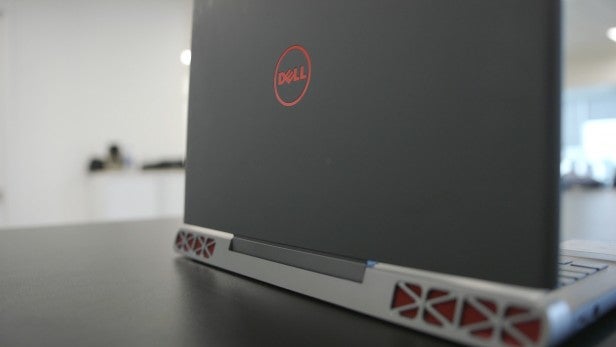 This behemoth weighs in at an impressive 2.65kg and is 25mm thick. The bottom spec of this machine is very similar to the Dell XPS 15, which weighs 2kg, is substantially thinner and costs £500 more – 2.65kg is heavy, and a two-strap rucksack is a must.

The soft-touch plastic lid picks up greasy marks and scuffs quite easily, but it looks pretty good. The wrist rest, meanwhile, is made from black plastic with a sprinkling of metallic running through it. The keyboard is the same as you’ll find on all Inspirons of the past few years, and features white backlighting. 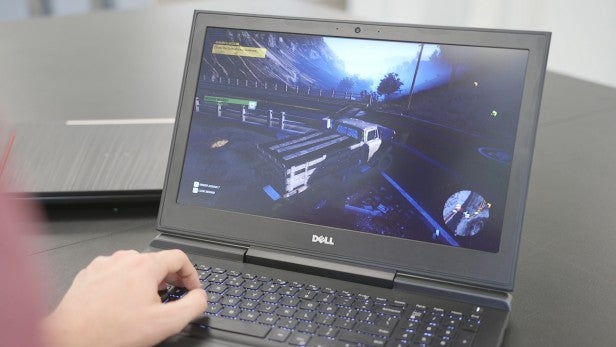 The hinge for opening the screen is perfectly weighted, therefore allowing it to be opened one-handed without having to hold the base down.

In terms of connections, there are three USB 3.0 ports, an SD card reader, a full-size HDMI 2.0 port and – most welcome – an Ethernet port. What the Inspiron 15 Gaming is lacking are a mini-DisplayPort and a USB Type-C connector, which although not essential, are nice to have these days.

Dell has done a solid job on the touchpad, which is Microsoft Precision-certified. This means it responds instantly to all the most important Windows 10 gestures, including two-fingered scrolling, pinch-to-zoom and three-fingered window switching. I’d have preferred it to have been made from a slightly smoother material, but it’s by no means uncomfortable in use.

The keyboard, meanwhile, is classic Inspiron fare. Made from a slightly grippy material, each keypress doesn’t offer a huge amount of travel, but it’s nonetheless a responsive and reliable keyboard. It’s even backlit. You get a full number pad and there’s plenty of space between each key. It’s a solid piece of kit.

The most disappointing feature is the screen. It isn’t simply sub-average, it’s poor for a laptop that costs £1100 – and hurts this machine’s credibility. Although a Full HD panel, it uses cheaper Twisted Nematic (TN) technology. This isn’t always a bad option, but Dell has chosen pretty much the most bargain-basement TN available, and it shows.

The screen’s vertical viewing angles are super-narrow; you’ll notice real colour shift if the screen isn’t at the right angle for your head position, and it takes a bit of tweaking to get it just right. Plus, if you shift in your seat or lean back, you’ll have to change it again. In particular, this is a problem in games with darker scenes – you’ll have to stay super-still while trying to grab a sneaky kill at night in Ghost Recon: Wildlands, for example. 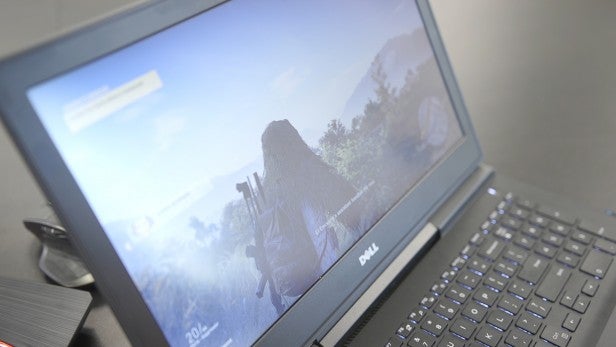 If you’re upgrading from an old, cheap laptop, this might be familiar territory. But in 2017, it’s very hard to forgive such a shortfall in a laptop that costs more than a grand.

Our regular calibration tests confirmed the screen’s poor specification: I measured just 363:1 contrast (you should expect at least 1000:1) and the panel can cover just 58% of the sRGB colour gamut, which is about as low as it gets. Colours are noticeably washed out and just won’t do justice to your games.

If you have an HDMI monitor that you can use while at your desk, I’d highly recommend it. But should you have to buy extra hardware just to make your laptop look decent? I’m not so sure.

This laptop’s real strong suit is its speakers. There’s a pair of tweeters and a subwoofer buried inside the chassis, and they have a decent amount of room to breathe. Music is relatively loud and clear, and the extra bass afforded by the subwoofer is welcome. I did find the pre-installed MaxxAudio Pro software did a decent job of artificially increasing bass and mid-range, and you can tweak it to your liking.

I found the speakers worked particularly well with mixed music and speech, with dialogue sounding smooth and clear.

The webcam, too, is decent. It has face-tracking built in, always ensuring your face is in view. Microphone audio is fine, although initially the MaxxAudio Pro software was causing problems because it thought the slight static whine coming from the microphone circuitry was a human voice, and boosted its volume instead of my voice. Switching off its ‘enhancements’ fixed it, although it still didn’t sound quite as clear as I’d like.