The Dell G5 Gaming Desktop is a reasonable 1080p and eSports machine, but it's found wanting in too many areas – particularly the GPU performance – to be worthy of competing with similarly priced rigs

The Dell G5 Gaming Desktop (5090) takes aim at gamers who want an affordable, no-nonsense system for 1080p titles and eSports.

This updated G5 costs £809 in the UK and $715 in the US. It pairs an Nvidia GeForce GTX 1660 Ti with an Intel Core i5-9400 processor, so it’s well placed to tackle mainstream gaming. But should people buy this big-brand machine in a market packed with alternatives?

Those dimensions mean the Dell trades blows with its keenest rival: the MSI Trident A is only 130mm wide, but it’s 396mm tall. 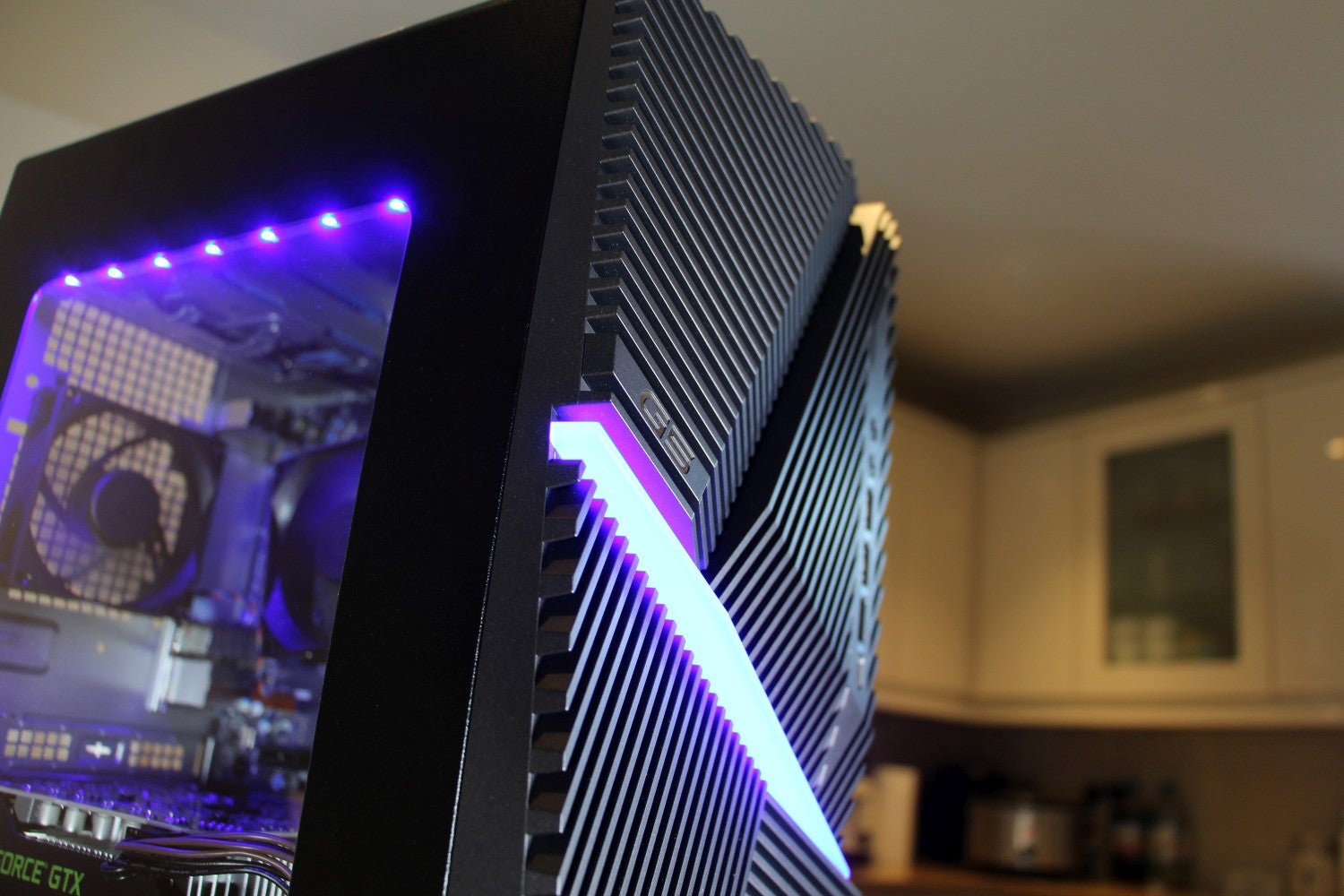 On the front, the Dell features one USB 3.1 Type-C port, one full-size USB 3.0 port and two USB 2.0 ports. There are also two audio jacks. Round the back, the Dell serves up four USB 3.1 ports, two USB 2.0 connectors and three audio jacks.

Internal connectivity includes Gigabit Ethernet, single-band 802.11ac wireless and Bluetooth 4.2. This connectivity is fine for a basic rig, but the lack of dual-band wireless means this machine will be less effective when connecting to home networks.

The Dell’s side panel is easy to remove and features a small plastic window, but that’s only a sop to current gaming PC trends – there isn’t much to see on the inside. The motherboard is plain, and the CPU cooler is small and basic. 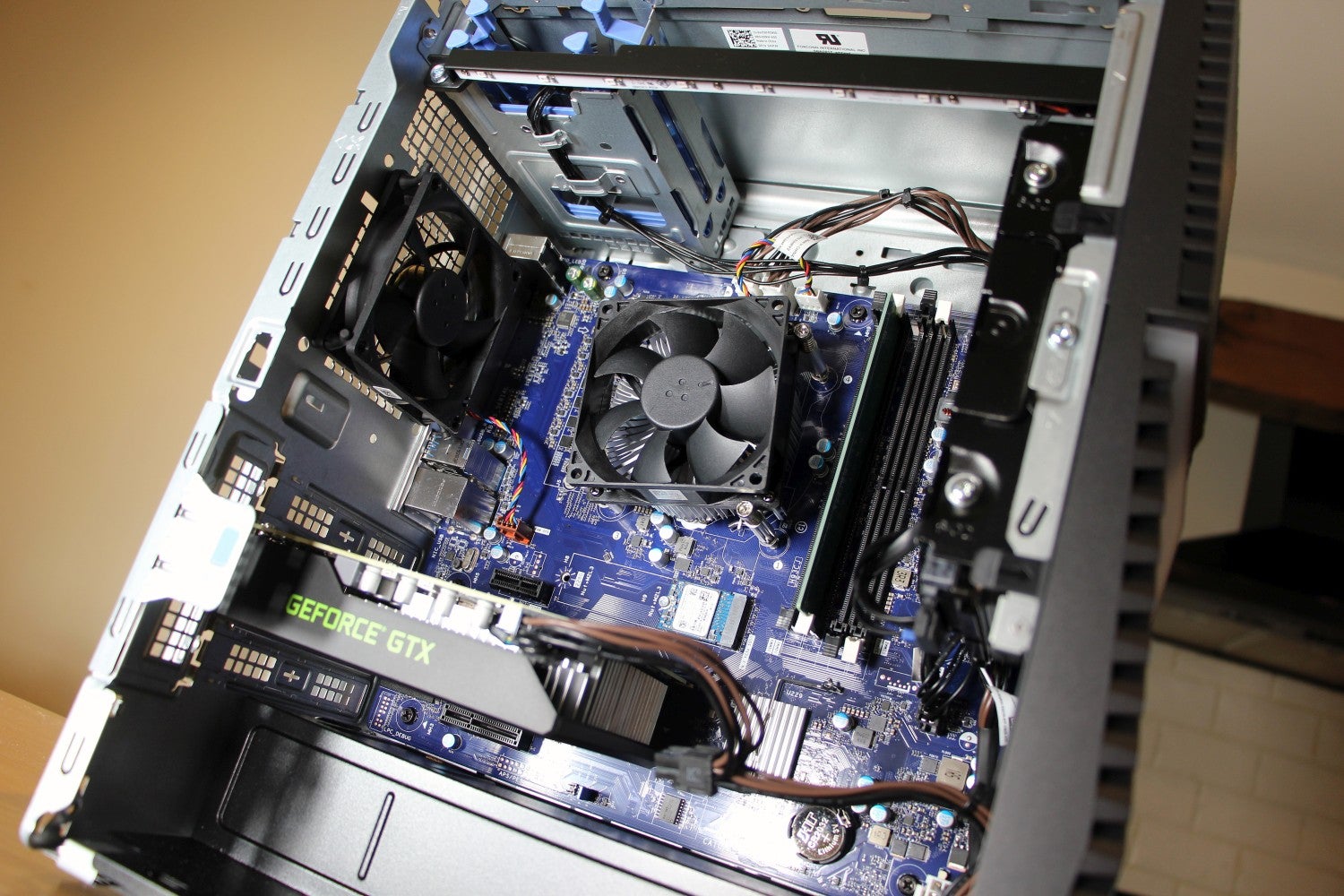 When it comes to upgrade room, there are two tool-free 2.5in bays and three extra memory slots. There’s also a single spare PCI-Express 6-pin connector for beefier graphics cards. However, there’s no room for extra 3.5in drives or M.2 SSDs, and there’s no second 8-pin PCI power connector.

This is one area where looking beyond smaller, big-brand machines will deliver upgrades. Buying similarly priced PCs from companies such as Chillblast and CyberPower will give you larger enclosures, but they’ll offer more upgrade room.

The model reviewed here sits in the middle of the range and costs £809 in the UK. The US version costs $715 and includes identical specs, albeit without the SSD.

The Dell’s key gaming component is an Nvidia GeForce GTX 1660 Ti. It’s a solid mid-range card: it offers 6GB of memory, 1536 stream processors and a Boost speed of 1770MHz.

However, the GTX 1660 Ti has no dedicated ray tracing cores, so that feature can be ruled out – you’ll need an RTX 2060 GPU for that.

It’s also worth examining the wider marketplace. The GTX 1660 Ti has been replaced by the GTX 1660 Super. That GPU offers fewer stream processors, but higher clock and memory speeds. 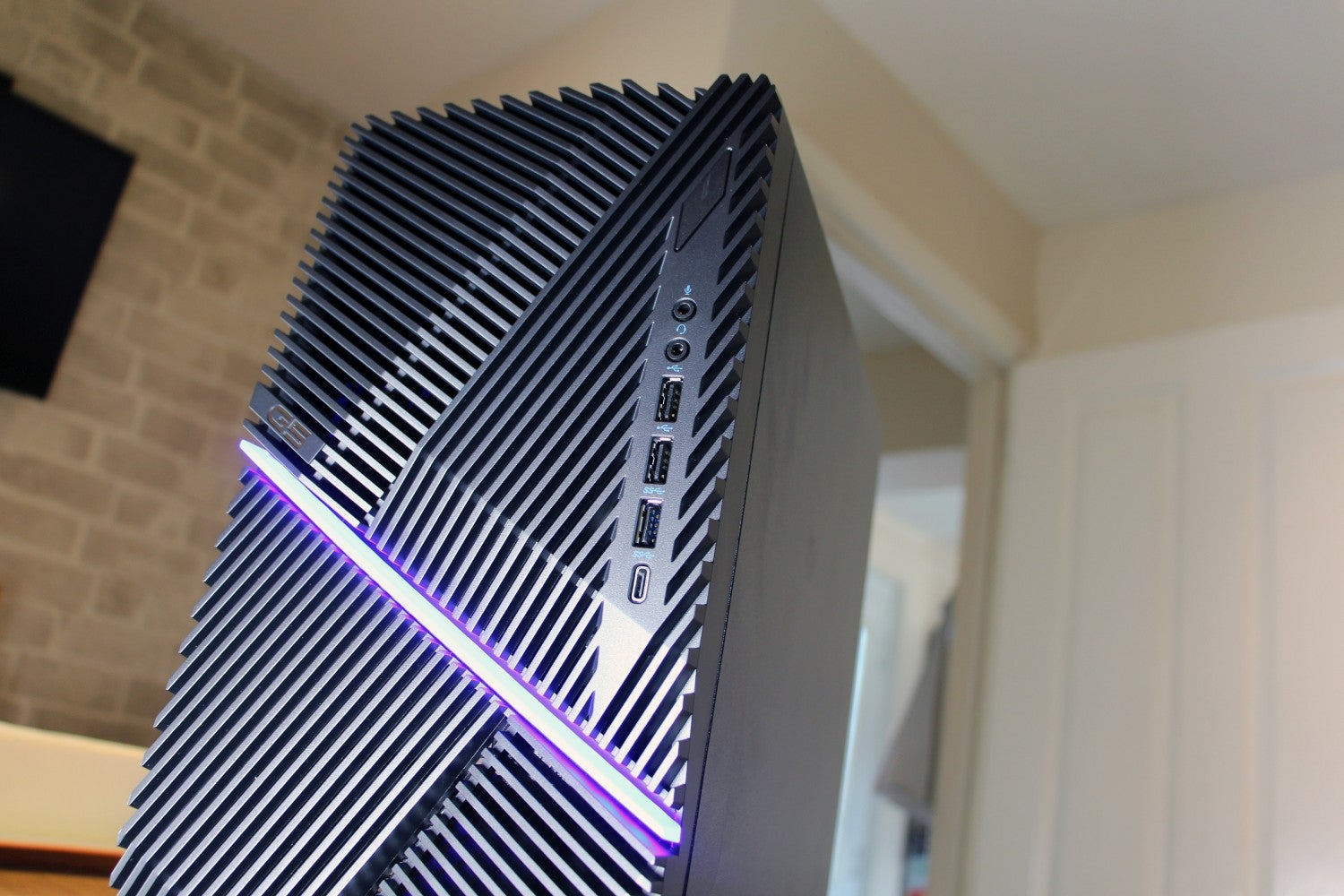 The GTX 1660 Ti remains reasonable. I ran Shadow of the Tomb Raider, Shadow of Mordor and Ghost Recon: Wildlands at 1080p at their highest quality settings, and the Dell returned average frame rates between 47fps and 132fps.

It’s enough pace to run any single-player game in Full HD and at a smooth frame rate – you’ll usually average 60fps or beyond. It’s also sufficient speed for playing eSports titles in Full HD at 100fps or more, so you can use 144Hz monitors. You’ll also be able to play games at 1440p, although the toughest titles will require you to dial back graphics settings.

However, the RTX 2060 is faster. The card in the MSI Trident A rattled through Ghost Recon: Wildlands at 58fps – 10 frames more than the Dell. 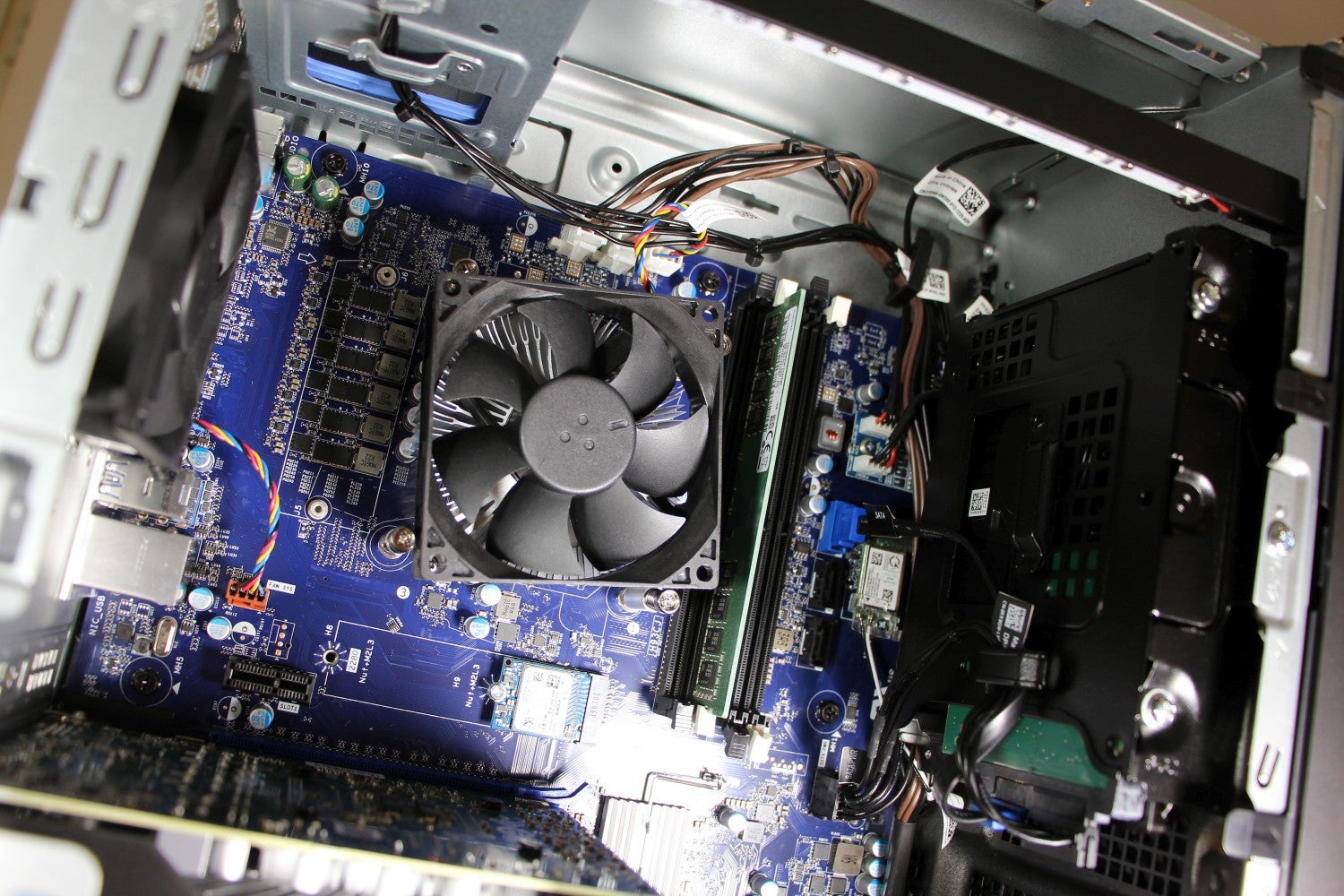 The Dell G5 Gaming Desktop features an Intel Core i5-9400, which is a six-core CPU with base and boost speeds of 2.9GHz and 4.1GHz. But despite having the same CPU and 16GB of memory, the Dell’s CPU benchmark scores are miles behind the MSI Trident A.

The Dell’s weaker GPU and its lesser memory amount are partially responsible for the reduced performance, but the biggest issue is the memory installation. While 8GB is fine, it’s installed in a single-channel configuration, which results in a huge hit to performance. In a PC with four memory slots, it’s inexcusable.

The underwhelming CPU still manages to be fast enough to avoid gaming bottlenecks, though, and there’s enough power here to handle web-browsing and Office applications. However, there’s no denying the Dell could be far quicker.

It’s a good thermal performer, at least. The Dell G5 was virtually silent when handling low-intensity tasks, and displayed only a modest amount of fan noise when gaming. It’s no louder than a console.

In addition, the SSD is mediocre. Its read speed of 1578MB/s is average, but its write pace of 203MB/s is no better than a conventional hard disk. 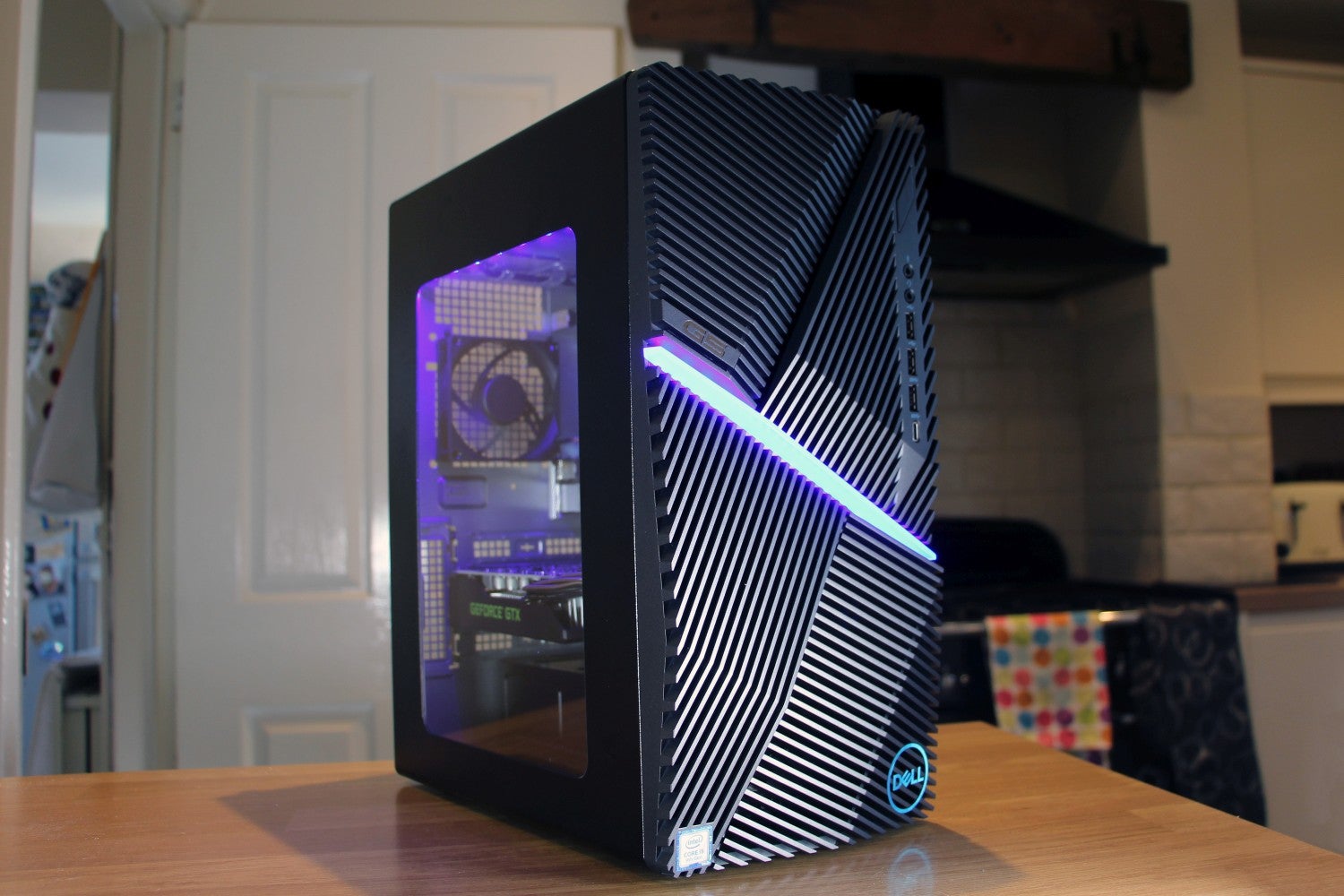 Should you buy the Dell G5 Gaming Desktop?

For the price, the Dell G5 Gaming Desktop is a capable and affordable system. The GTX 1660 Ti is fast enough to play any single-player title at 1080p, and it’s good enough for eSports. This rig will be fine with everyday computing, plus it’s quiet, small and sturdy.

There are numerous issues, though. Connectivity is underwhelming, and the poor memory configuration reduces performance. The motherboard is basic too.

The wider market presents a problem for the Dell. This version of the system costs £809/$715, but there are numerous machines at that price that come with the GTX 1660 Super, which is significantly quicker. It’s also only a little more expensive to get a PC with the RTX 2060.

So while the Dell G5 Gaming Desktop is reasonable for 1080p gaming and eSports, the market offers far better options for the price, making this system one I can’t recommend.