Dell Concept Duet is a fascinating device with oodles of potential thanks to its incredible versatility, offering the benefits of both laptop and tablet designs. Whether it will succeed – if it ever launches – depends largely on performance, battery life and price, all of which remain a mystery. Stil, it’s very exciting to see Dell showcasing such ambitious innovation.

What is the Dell Concept Duet?

The Dell Concept Duet is – as its name implies – a concept device that was unveiled at CES 2020, flaunting a new form factor not currently seen on store shelves.

Dell’s new device could be described as a dual-screen tablet, connected via a hinge so it resembles something akin to a digital book.

It’s not the first time we’ve seen something like this, with the Dell Concept Duet the spitting image of Microsoft’s previously revealed Surface Neo – I’m sure there would have been several loud groans in Dell HQ when Microsoft showed off its dual-screen device back in October 2019.

Unlike the Surface Neo, Dell’s Concept Duet isn’t committed to an official launch – this is just a concept device for now. But with dual-screen laptops and foldables  the new trend of 2020, we’re confident Concept Duet will become official before the year is out. 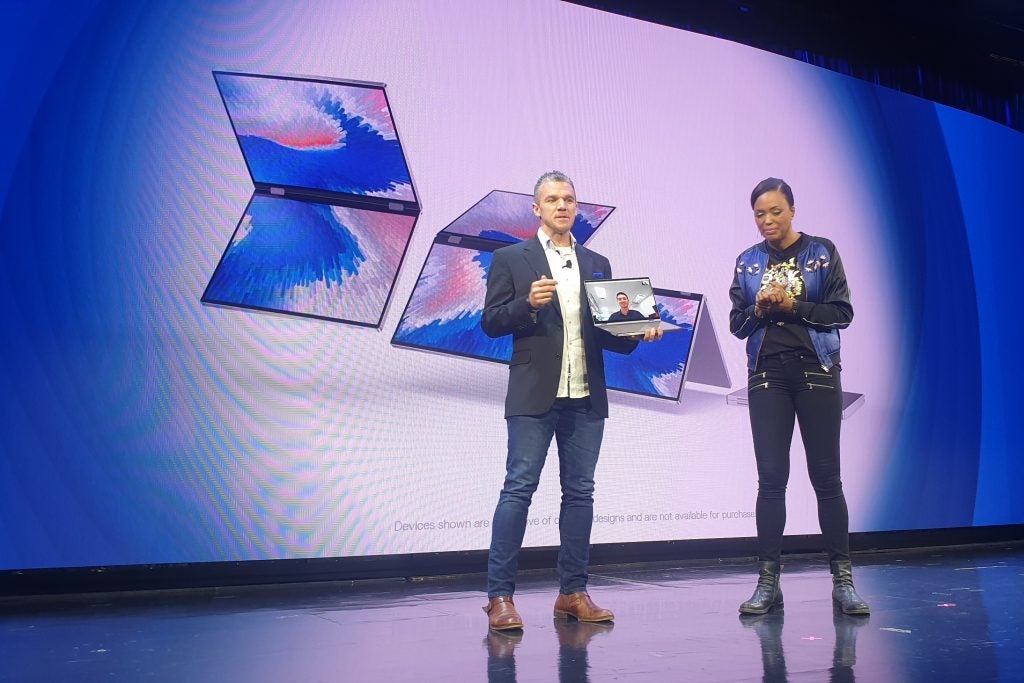 Dell Concept Duet price – How much will it cost?

There’s no official price for Dell Concept, which is no surprise given this is just a concept device right now.

It’s hard to guess what price it will retail for too, as there’s nothing like the Duet currently available. Surface Neo is the closest device to Duet, but Microsoft has offered no hint of cost.

Dell Concept Duet release date – When will it launch?

Dell Concept Duet is just a concept device, so there’s no guarantee it will become available to the public.

That said, Dell has a history of revealing devices as concepts and then later officially making it official as it did something very similar with the Alienware 55 OLED Gaming Monitor back in 2019.

If there’s enough positive feedback, I’m confident Dell will officially launch the Concept Duet. But when could we expect it? Microsoft’s Surface Neo is targeting a Q4 2020 release, so I’d say that’s the absolute earliest we will see Dell’s Duet. 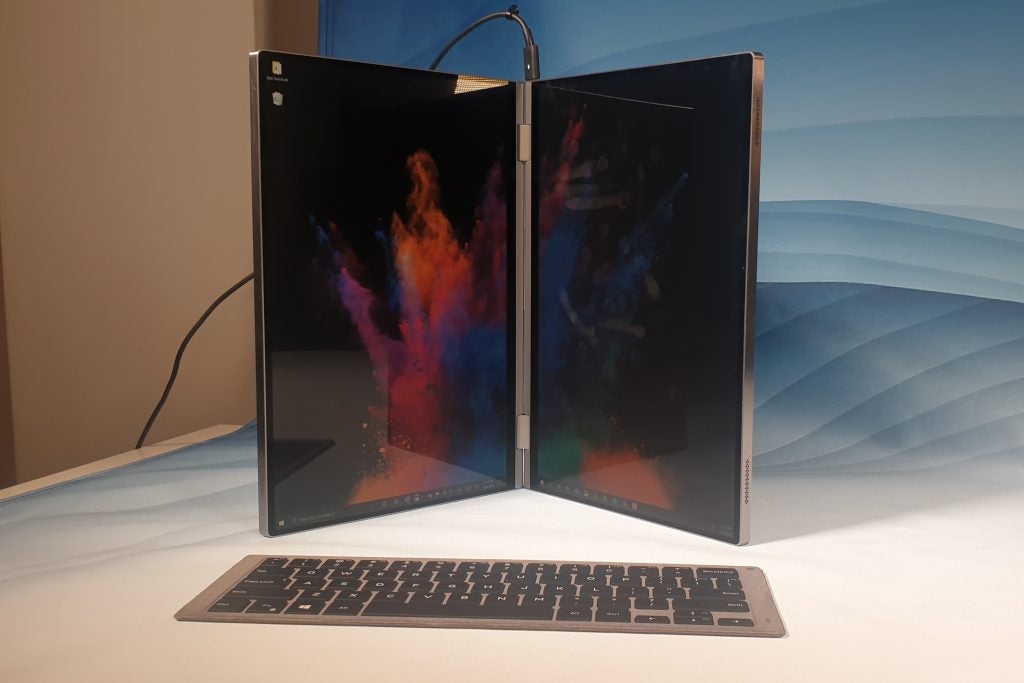 Prior to CES 2020, Dell flew me out to New York to have hands on time with all of the new and upcoming products. One of the most exciting devices shown was the Dell Concept Duet, a device with such a unique design that it doesn’t really fit into any current classification.

The Dell Concept Duet looks like two tablets welded together via a laptop hinge. There’s no keyboard here, just two screens side by side.

It certainly looks cool, but what exactly is the point of such a device? The Dell team was keen to point out the Duet has oodles of potential for multi-tasking. One example Dell used was video chatting with a friend, while sketching on a map displayed on the second screen in order to plan out a road trip. 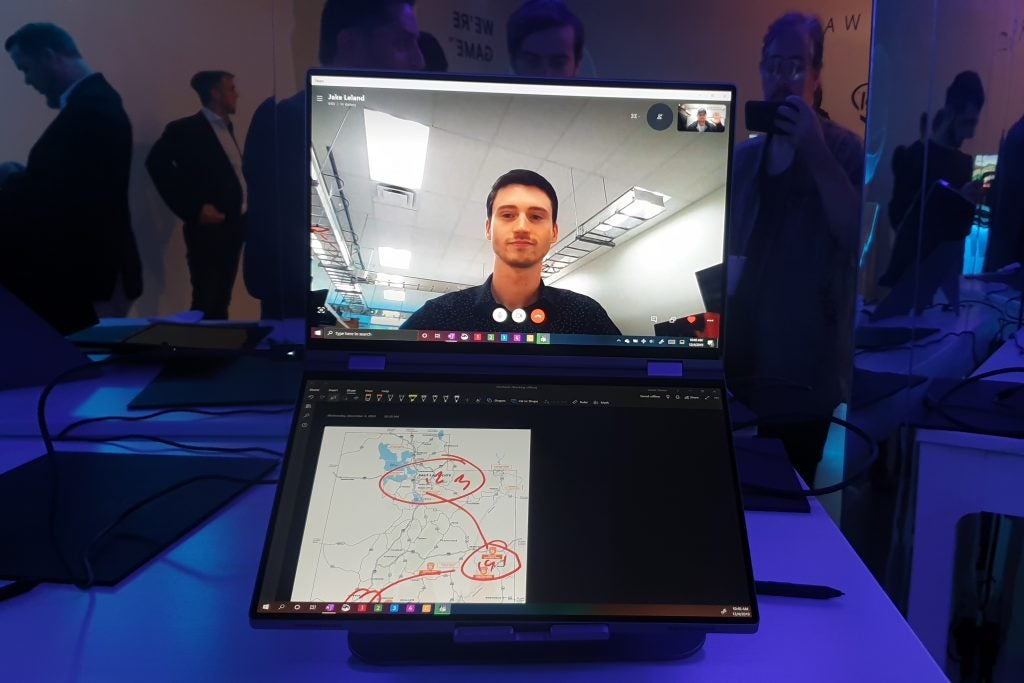 Another example includes using the Duet like an actual book, as they loaded up a PDF of Alice in Wonderland so it filled up both screens.

I’m not personally convinced the Duet is about to displace my Kindle, but I started to grasp the huge potential this new form factor could offer over a tablet or laptop. I was particularly intrigued when a Dell representative whipped out an external Bluetooth keyboard. 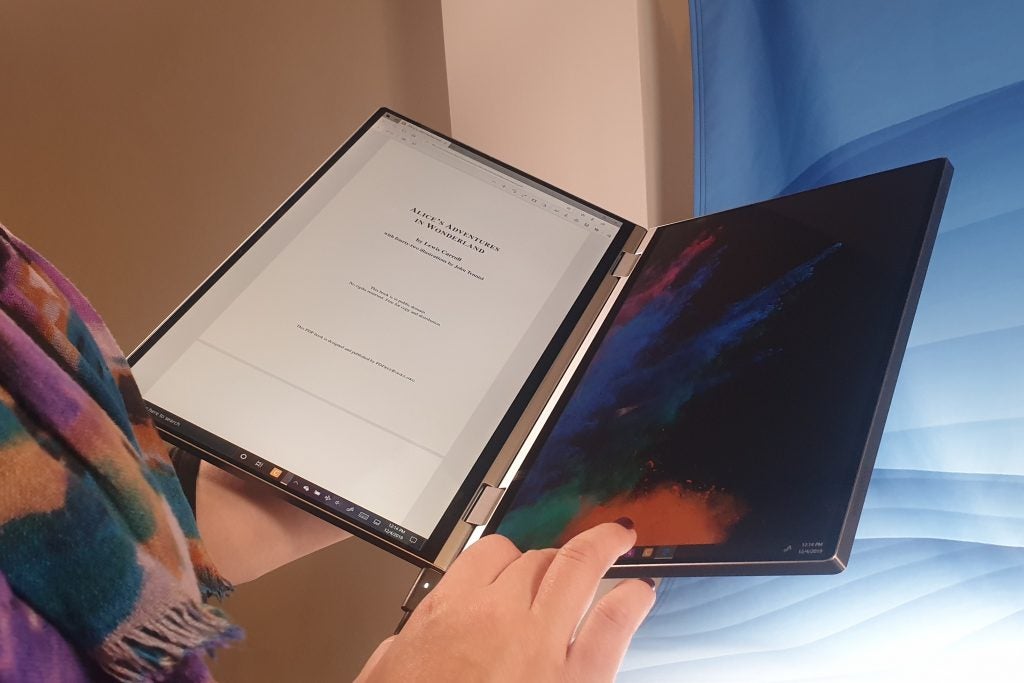 The miniature keyboard can either be placed in front of the Duet, or clipped magnetically onto the bottom screen. Since the keyboard only take up the top-half of the second screen, the remaining half can be used like a trackpad. Suddenly, the Dell Concept Duet looked and functioned like an XPS laptop.

With the introduction of the Bluetooth keyboard, I started thinking how the Dell Duet would make my work life so much easier. As someone who regularly plugs my laptop into an external monitor for a dual-display setup, the Duet would be incredibly useful for fact checking articles and copying down notes – or even for watching YouTube as I type up a review.

So would the Dell Concept Duet be useful? Yup. Is it an exciting concept? Absolutely. Will its unique versatility be worth the inevitable price jump over a regular Dell XPS laptop? I’m not so sure. That answer depends largely on the performance power of the Duet, but Dell remains tight-lipped regarding what components are stowed inside. 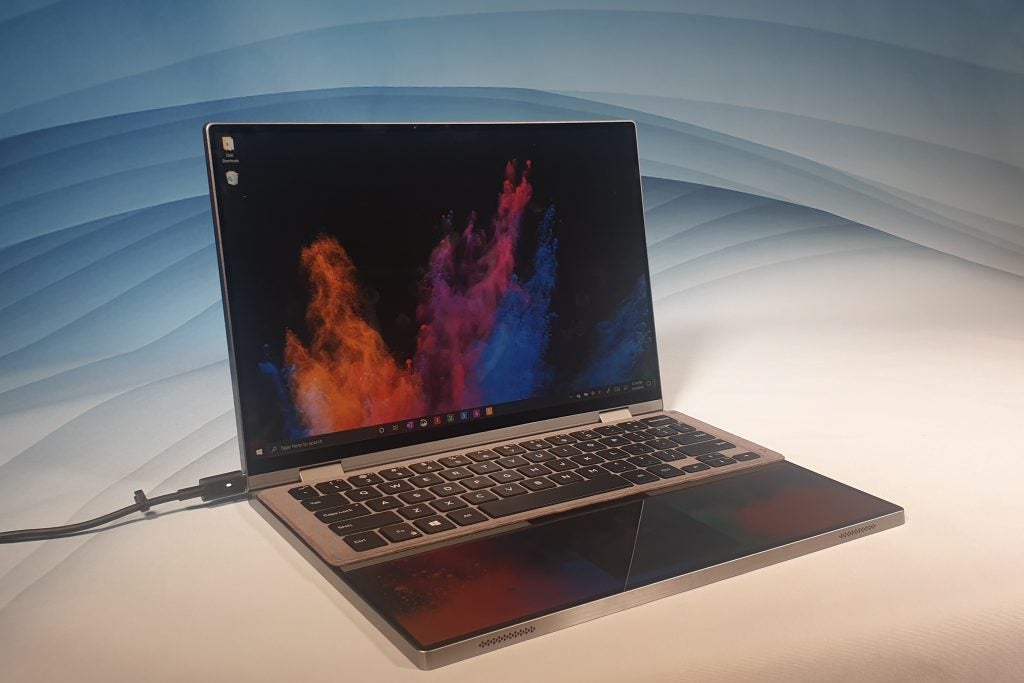 If the almost identical Surface Neo is anything to go by, Dell Concept Duet could be using the Intel Lakefield hybrid processor, a 10-nanometer Tremont Atom core chip that aims for the perfect balance between battery life and power. If this is the case, the Duet will unlikely be as powerful as the latest Dell XPS laptops, but that’s the sacrifice you’ve got to make for such versatility.

In terms of ports, the Dell Concept Duet features two USB-C ports as well as a headphone jack. That’s essentially the same as what the Dell XPS 13 offers, which isn’t too shabby.

Should you buy the Dell Concept Duet?

Since the Dell Concept Duet is just a concept device right now, you can’t buy it. That said, I’m optimistic this will eventually see the Duet hit stores eventually, even if that’s beyond 2020.

If that does indeed become the case, then the Duet will no doubt be an exciting addition to Dell’s already excellent lineup of portables. Whether it will be worth the purchase is another thing entirely.

The most important thing for the Concept Duet is how much use you’ll be able to get out of the dual-screen concept. Currently, I can only think of multitasking at work, which can already be done with a traditional laptop connected up to an external monitor. Maybe by the time of release, there will be more applications that make use of the new form factor, but that will require a lot of commitment from developers.

Dell rarely puts a foot wrong with its portable computers though, and with other major companies such as Microsoft launching a dual-screen device, it’s clearly not alone in thinking there’s potential for such a revolutionary form factor. While I still have a little scepticism for such a device, there’s no denying I’m very excited by the prospects offered by Concept Duet.

Dell Concept Duet is a fascinating device with oodles of potential thanks to its incredible versatility, offering the benefits of both laptop and tablet designs. Whether it will succeed – if it ever launches – depends largely on performance, battery life and price, all of which remain a mystery. Stil, it’s very exciting to see Dell showcasing such ambitious innovation.