Dell’s range of all-in-one printers continues to grow and the 968 sits near the top of the UK range. Designed for a high-end home customer or for a SOHO environment, the device supports print, scan, copy and fax, as well as being able to print from memory cards and cameras.


Most of Dell’s all-in-one printers are made for it by Lexmark and the 968 looks very much like something out of the latter’s latest range of devices. Coloured in silver and white, with a wraparound look to its corners, it manages to appear a bit less boxy than machines from its alter ego.


The horizontal, indented Auto-Document Feed (ADF) tray is a nice touch, as is the beautifully simple control panel. For a four-in-one machine like this, a simple number keypad and a total of nine other buttons control all functions of the machine. They work with a 61mm LCD display, which has a well-designed menu and feedback system, including animated instructions for jobs like changing ink cartridges. 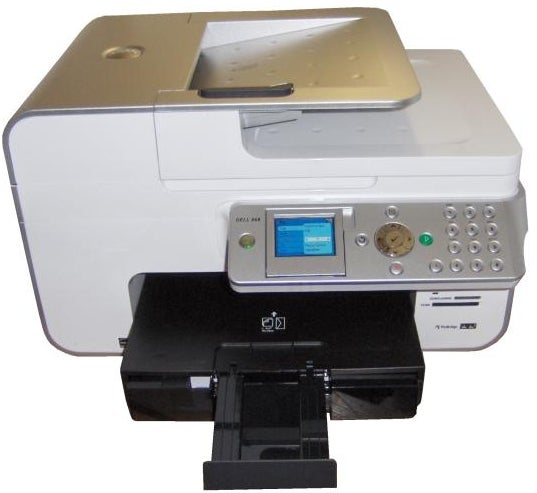 There’s a ‘150-sheet’ paper tray at the front, though Lexmark must use lightweight paper, as we could only get around 120 sheets of 80gsm office paper under the maximum loading marker. On top of the paper tray is a single-sheet feed for envelopes or 15 x 10cm photo blanks. To its right are two memory cards slots, which combine to accept all the common types, and a PictBridge socket for cameras.


At the back of the 968 is a single USB 2 socket and another for phone line connection for the built-in fax. You can also install a combined Ethernet and WiFi adapter, a duplexer and an extra 150-sheet tray as options.


Set up is straightforward. Lift the scanner section, which is supported on sprung hinges, and clip black and tri-colour cartridges into the holders in the carriage. If you’re printing photos, you may want to exchange the black cartridge for a three-colour photo one, though this isn’t supplied as standard.


Dell provides Abbyy FineReader OCR and Corel’s Snapfire photo manager, fax software and the 968’s driver. This gives good support to the scan, as well as the print functions of the machine. It has sufficient optical resolution to be able to scan photo prints, as well as text pages for recognition.


The quality of black print is only reasonable, with considerable feathering of ink into the paper. It’s fine for home printing, but characters look very jaggy under a loupe, which gives them a general fussiness and imprecision when looked at with the naked eye. This is odd, as Dell claims to use a pigmented black ink, and the size of pigment particles normally restricts the amount of ink travel down the fibres of the paper. 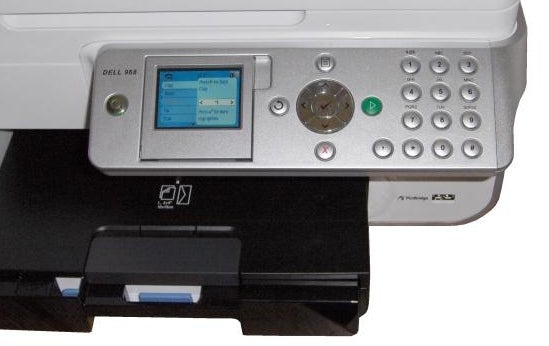 Colour print is much better, with bright, vibrant graphics colours. Black text over coloured backgrounds is also well registered, giving a clean result. Photocopying of a page printed by the 968 also gives reasonable colour reproduction. Although there’s some fading, for many uses colour photocopies from this machine are adequate.


Four-colour photographic prints, on Dell glossy photo paper, aren’t wonderful. Colours come out too bright, giving an over-emphasised affect, and some shadow detail is lost. Scan quality is reasonable and the quoted resolution of 1200 x 4800dpi is certainly high enough for general use, including OCR.


If you’re printing four colours, there are just two consumables, a black and a tri-colour cartridge. These are only available from Dell and are priced rather higher than those for the Dell 928, which we tested some while ago. They also have a higher yield, though, giving lower costs per page than from that machine. The black page cost is around 4.3p, while a colour page comes out at around 8.7p. Both these figures are high, compared with the opposition. 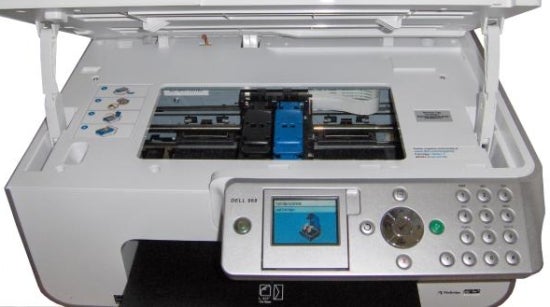 These figures are based on tests conducted by QualityLogic for Dell, where the specification of the test pages isn’t revealed. However, we believe it to be similar to the ISO page yield test suite. Using our own ISO suite, we produced very similar figures to those quoted from QualityLogic, so used Dell’s figures in calculating page costs.


The Dell 968 is a neat, functional all-in-one printer, which should be fine for general use in the home or home office. Its speed is well below that quoted, but isn’t that different from other ink-jet all-in-ones from Dell’s main rivals. Print quality is good for colour graphics, though less good for photos and black text and running costs are reasonable in comparison with other machines costing around £100.