Following on from the recent launch of the Dell 1250c LED printer, which set a new target for the minimum size of laser-class printers, Dell has followed up with the 1355cnw, a multi-function printer that adds scan, copy and fax to the feature set.


The 1355cnw uses the same Xerox-made print engine as its simpler sibling and the case is not much larger, giving this device a very small footprint on the desk. The LED engine uses a strip of high-intensity LEDs in place of the more complex laser light source to create a page image on its photoconductor drum. This is a simpler process and enables a more compact printer to be made. 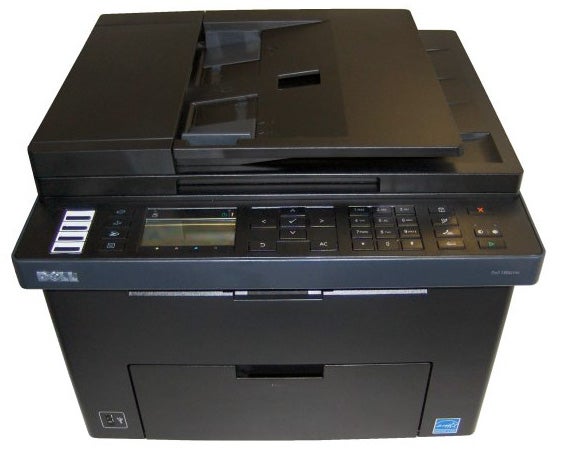 Dell is definitely in the square-cut, no-nonsense mould with this machine. Even the 1355cnw’s Automatic Document Feeder (ADF) is square, with an inset in its top surface to take up to 15-page documents for scanning. The scanner lid has rising hinges, so you can scan from books as well as paper, and the control panel protrudes from just in front of the flatbed.


The logically laid out control panel is completely horizontal, which is OK since the printer sits low to the desk. There’s a mono, bitmapped LCD panel that can show several lines of text or graphics, as necessary. To its left are mode buttons and four quick-dials for fax, while to its right is a cross of five navigation keys, then a number pad and finally scan and copy job controls.

Paper ejects just below the balcony of the control panel and feeds from a 150-sheet tray, formed by folding down the front panel. As with the 1250c, a cover for the paper stack slides out from inside the machine, when the tray is open, and it has a 10-sheet multi-purpose feed built into its top cover.


Just to the left of the paper tray is a front-panel USB socket, which can print graphics directly from a USB drive and save scanned images to one. The control panel enables four lines of a drive’s file tree to be viewed at once. At the back are sockets for 10/100 Ethernet, as well as USB and this version of the printer also supports wireless connection (the 1355cn doesn’t and costs less).


Wireless setup is straightforward and can be achieved through both router push-button and passcode entry methods. Dell supports Windows and OS X, but again there’s no specific mention of Linux support. Various small applets are provided with the machine to handle scanning and fax, as well as print.

Dell rates the 1355cnw at 15ppm printing black and 12ppm printing colour. These are both quite modest figures, but we didn’t see speeds that fast under test. Our five-page black text print completed in 43 seconds, giving an effective speed of 7.0ppm, but this increased to 10.4ppm for the20-page test.

This is still only two thirds of the rated speed and the five-page text and colour graphics document returned 7.3ppm. Interestingly, given this machine uses the same print engine as the 1250c, the speeds here are all a little faster than from that machine. The copy speed is fair, with a single-page colour copy taking 47 seconds and a five-page black text one finishing in 50 seconds.


The print quality is pretty good, with black text coming through crisp and dense. The printer’s resolution may only be 600dpi, but it’s easily good enough for all general purpose office duties. Colour print is also good, with bold, clean colours giving arresting graphs, charts and graphics. 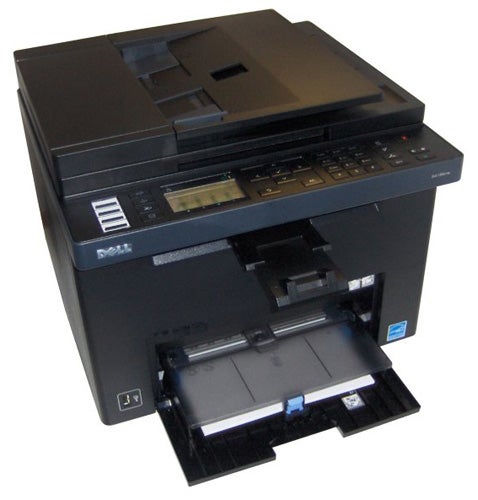 Even photo prints are reasonable, with smooth colour transitions and natural hues. Darker colours are a bit too dark, but even at full page the images reproduced are very serviceable. If you are at all reluctant to buy an LED printer rather than a laser because of stories of poor LED print quality, they’re well and truly refuted by the output from the 1355cnw.


Our main problem with the 1250c was the cost of its consumables, which at 3.9p and 17.7p for black and colour respectively, were well outside the normal range, particularly for colour print. The 1355cnw uses the same cartridges, but we checked the Dell site anyway, in the hope of some reduction. They’ve gone up in price, giving new page costs of 4.3p and 19.9p, both including 0.7p for paper, as before. These are very dear, some of the highest we’ve ever seen in our years of testing.


Although the technology is interesting and the size is convenient, the price of both the machine and especially its consumables is eccentric. How does Dell believe it can get away with charging nearly 20p for a colour page, when similar printers are doing the same thing for less than half that, and costing less to buy, too. It’s a real shame, as the machine itself is easy-to-use, well-equipped and produces good print, if a bit slowly. It’s a marketing, not an engineering, fail.