It could be that some patents have run out, or just that several manufacturers have seen the advantages of going for a solid-state system in their page printers. Whatever the reason, both Brother and now Dell have decided to produce a range of printers based on LED illumination. 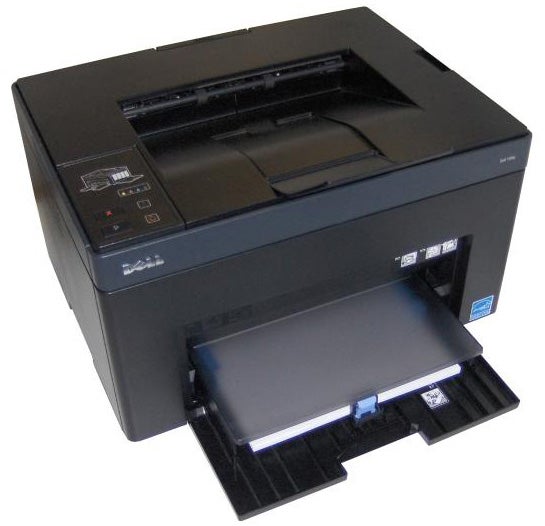 Rather than having a laser beam scan the photoconductor drum of their printers to create a page image, they have a page-width strip of high-intensity LEDs, which does the same job. As well as being a much simpler mechanism, it’s also much more compact and Dell has made good use of this in its 1250c model, which it claims to be the smallest colour laser-like printer on the market.


It is indeed small – quite a bit smaller than some other manufacturers’ mono laser printers and very easy to include on a desktop as a personal printer. It takes on Dell’s very square-cut, matt black lines and has a conventional layout. There’s a single paper tray at the front, once you’ve folded down the front panel. Unusually, a cover for the paper stack slides out from within the machine, giving some protection against dust and spillage. Printed pages end up on the top surface of the printer, once you’ve folded out an extra paper support. 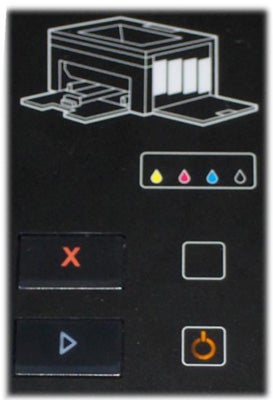 The control panel is simple, but effective, with buttons to start and stop a job and, appropriately, four LED indicators for toner level and two others for power and error conditions. At the back is a single USB socket, as the printer doesn’t come with network support as standard. 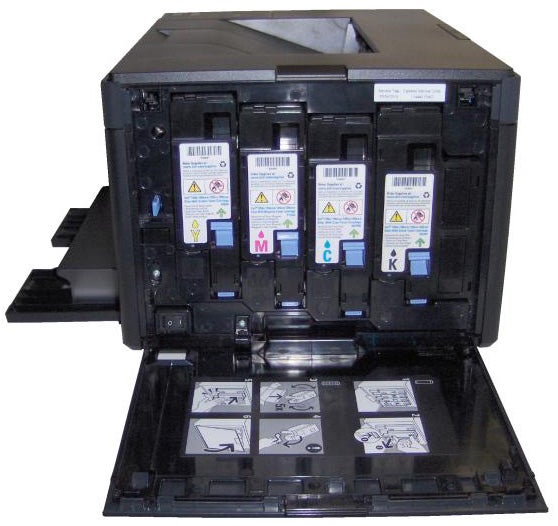 A good bit of thought has gone into the design of the engine, apart from the use of LEDs. Pull down the right-hand side cover and the four, small toner cartridges can be seen sitting next to each other. Each of these unclips very simply and renewing a toner cartridge is about as simple as it could possibly be. There are no other consumables, as the drum and fuser are designed to be lifetime components.


Dell supports versions of Windows from 2000 onwards, as well as OS X from 10.3.9, but there’s no mention of Linux support. If the machine proves as popular as we expect, however, it’s unlikely to be long before the community creates a driver.

While the new, simpler technology should ensure a high level of reliability, in this machine at least it doesn’t ensure speed. Although Dell claims 12ppm for black print and 10ppm for colour, we saw a maximum of 8.6ppm printing our 20-page black text print and only 6.7ppm for our black text and colour graphics test. A 15 x 10cm photo on an A4 sheet took 23 seconds. 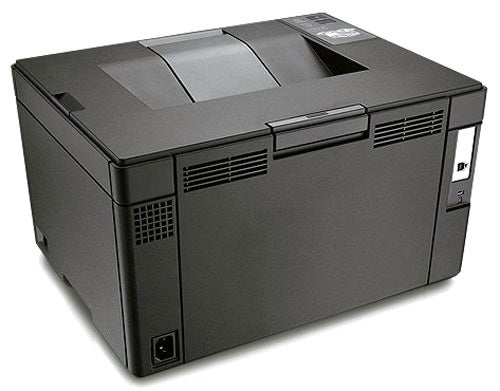 These times are slow, even for a printer in this price bracket. Compare it with the
Brother HL-3040CN, another LED colour printer at a similar price. This is rated at 16ppm for both black and colour and we saw maximum speeds of 14.5ppm for black and 9.1ppm for colour when we tested it.


Laser printer addicts often claim that LED print is not quite up to scratch in comparison to laser output, but that’s certainly not true here. 600dpi printed output from the 1250c is very good for day-to-day office work. Black text is crisp and clean cut, with no signs of artefacts or spatter. 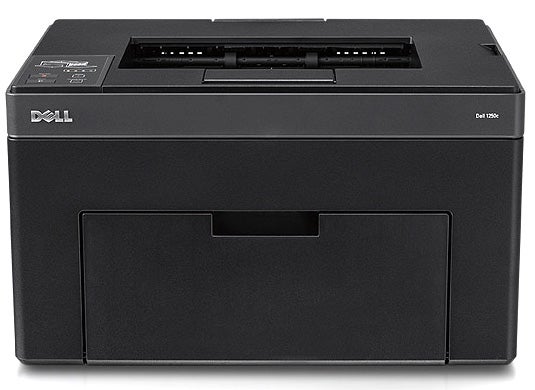 Colour graphics are strong and bright and there’s no visible haloing around black text on top of colour. Our test photo print, while a bit too heavy on the primaries, is passable and there’s very little sign of banding. Some detail is lost in the darker shades but for a page printer costing under £200, it’s not a bad effort. Output has a slight gloss sheen, which some customers may prefer, too.


It’s worth mentioning that this printer is unusually quiet while printing, peaking at under 60dBA, so it won’t be intrusive if you have it next to you on the desk.


Perhaps the biggest dent in the 1250c’s armoury is its consumable cost. Toner cartridges are available in a standard yield of 700 pages and a high yield of 2,000 pages black and 1,400 pages colour. Even using the high-yield components, page costs run at 3.9p for black and 17.7p for colour, including 0.7p for paper. While the black cost is not that untoward, compared with similarly priced machines, the colour price is the highest we’ve seen from any printer in a long while.


LED printing is an increasingly popular technology and this Dell machine, using a Xerox design, takes advantage of most of the benefits. It’s definitely the smallest colour page printer we’ve seen and while it’s a bit slow, it produces good quality print. It’s also extremely easy to maintain, as the only consumables are the toner cartridges. The main thing that lets it down, and this is really a marketing decision, is its cost per page, particularly when printing colour.