Dell started marketing printers in 2003 and, even if you don’t use Dell PCs, the range and prices of its printers mean you should consider them in their own right. Most Dell printers are manufactured by Lexmark, and the design of the 1110, reviewed here, suggests this is one of them. The 1110 is Dell’s entry-level mono laser, coming in at under £100.


This printer is small and light, taking up very little room on the desktop when closed. To print from it, you need to open it up, though, which involves unfolding a paper support from the output tray on top of the machine, and opening the front cover, which then forms the input tray. Even then, it has a small footprint and can easily sit on your desk, alongside a PC. 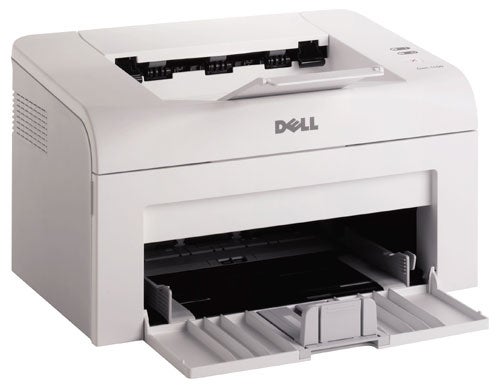 There’s no paper cover to protect the paper when it’s loaded into the 1110, which is a shame. It means you either have to remove and store the paper whenever you’re not printing, or put up with any dust/dandruff/coffee that falls on it, if you leave the printer open.


On the printer’s top surface, there are just two indicators, for power and error conditions, like paper jams. Various combinations of flashing show when data’s being received and pages are printing. There’s a single control button, which cancels the current job. At the back are sockets for mains power and USB 2.0 – the only data link available on the machine.


The integrated drum and toner cartridge slides right into the 1110, almost to the back, So far in does it have to go, that it has a fold-out handle so you can get a better grip – but it’s still easy to install. The small size of the laser engine makes you wonder whether a more radical design couldn’t reduce the footprint still further. Vertical paper feed and output trays, mounted one behind the other with the engine between them, as some older HP and Samsung designs used, could make for a very small Dell/Lexmark device. 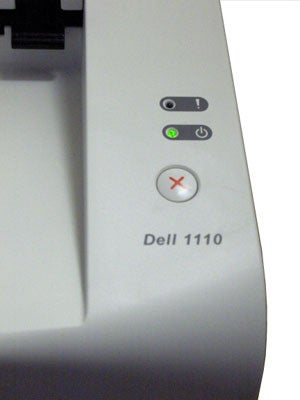 Software installation is a piece of cake, as there’s only the driver, an electronic user guide and a reorder applet. The latter is a marketing tool which triggers when the toner gets low and takes you to the Dell supplies site, so you can reorder a replacement cartridge in good time.


The driver is surprisingly well adorned, given the price of the printer, and offers watermarks, overlays and up to 16 pages per sheet. Although there’s no automatic duplex facility, there is guidance for manually printing on both side of the paper.

The 1110 is rated at up to 16ppm, but even assuming draft 300dpi output – default output is at 600dpi – this seems a bit wishful. We managed just under 10ppm, printing our standard text page and, interestingly, slightly more than this printing the text and graphics page. The 15 x 10cm photo image took 12 seconds, giving an impressive graphic print speed of 5ppm.


The quality of the prints we obtained from the Dell printer was unquestionably good. Text print was very clean and belied the printer’s 600dpi resolution. Business graphics output was also very clean with well reproduced stipples on areas of tint, though some slight banding was also apparent. When it came to the photo print, things weren’t quite as good, though of course this type of output is not what you normally buy a laser printer for. Again there was perceptible banding and even the 600dpi output produced prints where dot stipples were apparent. 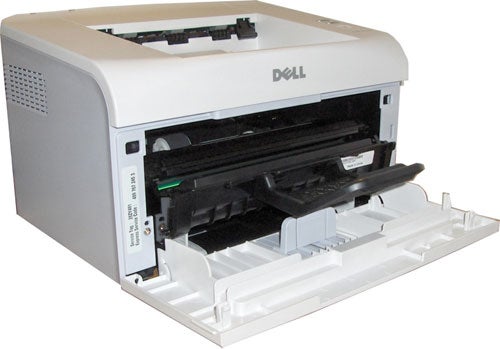 The single drum and toner cartridge is the only consumable in the 1110 and comes only from Dell by mail order. The price is therefore fixed at what Dell wants to charge, which in the UK is £46, or £39 ex VAT. Out of interest we went to the US Dell site and checked the cartridge price there. At $65, without local taxes and at current conversion rates, that comes out at £35, so there’s not a lot in it, which is as it should be.


The UK price equates to a cost per page of 2.76p, which is at the high end of the range, but not the top. Dell includes a half-full ‘starter’ toner cartridge with each new 1110, meaning you’ll only get around 1,000 pages at five per cent cover from it, rather than the 2,000 pages you get from each replacement cartridge.


Given the price point of Dell’s 1110, at under £100, it may seem churlish to criticise, but there’s an increasing number of machines pitched into this market. It prints well and is easy to set up, but the lack of a paper cover is awkward, the 1,000 page starter cartridge is cheapskate and running costs are on the high side.