Deadly Premonition 2: A Blessing in Disguise is a transcendant pile of garbage. It's both strikingly ambitious and laughably imcompetent in every regard, which is somewhat fitting given the iconic status of its predecessor. But all the campy brilliance aside, it's difficult to overlook its monolithic performance problems and decrepit approach to game design.

Ever since its original release in 2010, Deadly Premonition has cemented itself as an undisputed cult classic. Hidetaka Suehiro’s bizarre, unwieldy and ambitious detective drama drew inspiration from decades of films and television to craft a gaming experience that, for better or worse, was unlike anything else out there.

With Deadly Premonition seemingly under performing, appealing to little more than a hardcore sect of the medium’s landscape, it looked as as if any hope of a sequel was dashed. But it seems word of mouth, a dedicated audience and the sheer determination of its creators have willed a new game into existence.

As a Nintendo Switch exclusive, Deadly Premonition 2: A Blessing in Disguise is the worst performing game I’ve ever played on the platform, almost migraine-inducing with its horrendous frame rate and strange, fluctuating visuals. Long loading times and janky combat only further the reasons I found myself frustrated with Francis York Morgan’s latest adventure. Some may defend these technical shortcomings as being “part of the charm”, but it simply doesn’t make it very fun to play.

But all these complaints aside, there’s an alluring charm at the centre that kept me pushing forward, whether it was the compelling central mystery or the unpredictable citizens who call the town of Le Carré home. Deadly Premonition 2 constantly surprises, even if you need an unwavering sense of determination to push through some of the evident mediocrity that defines it. This is an acquired taste if I ever saw one, so you’ve been warned. 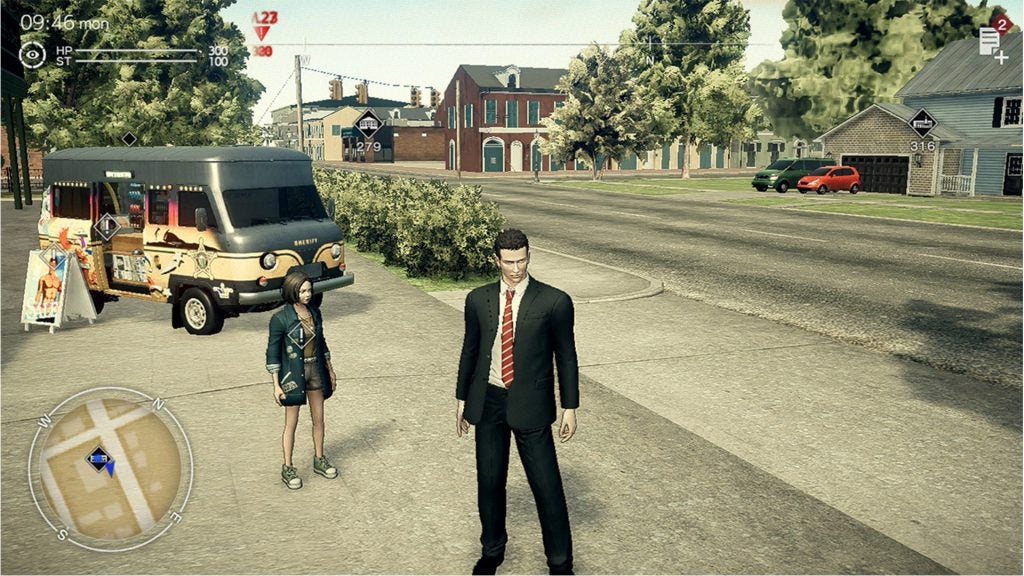 Acting as both a prequel and sequel to Deadly Premonition, A Blessing in Disguise is yet another layered, intriguing murder mystery with a far more sinister plot. It begins in 2019 with our protagonist, FBI agent Francis York Morgan, cooped up in his apartment lighting up a blunt in the presence of two probing colleagues. He’s the suspect in a revived case, despite working that beat himself so many years ago.

York looks downright archaic. His hair grey, complexion gaunt and general composure one that is ready to surrender to a mysterious illness. It’s a bleak set of circumstances, and raises a number of fascinating questions which kept me on the edge of my seat for the dozens of hours that would follow. Hidetaka Suehiro is a masterful storyteller, especially when it comes to maintaining intrigue and suspense; a talent we’ve seen in virtually all of his works.

Once all the cards are on the table, we’re transported to the town of Le Carré (circa 2004), when Francis York Morgan found himself tracking down the origins of a deadly drug known as Saint Rouge. Located in Louisiana, often referred to as the American Deep South, the setting is a dead ringer for True Detective, one of many cultural references the sequel pays loving homage to. 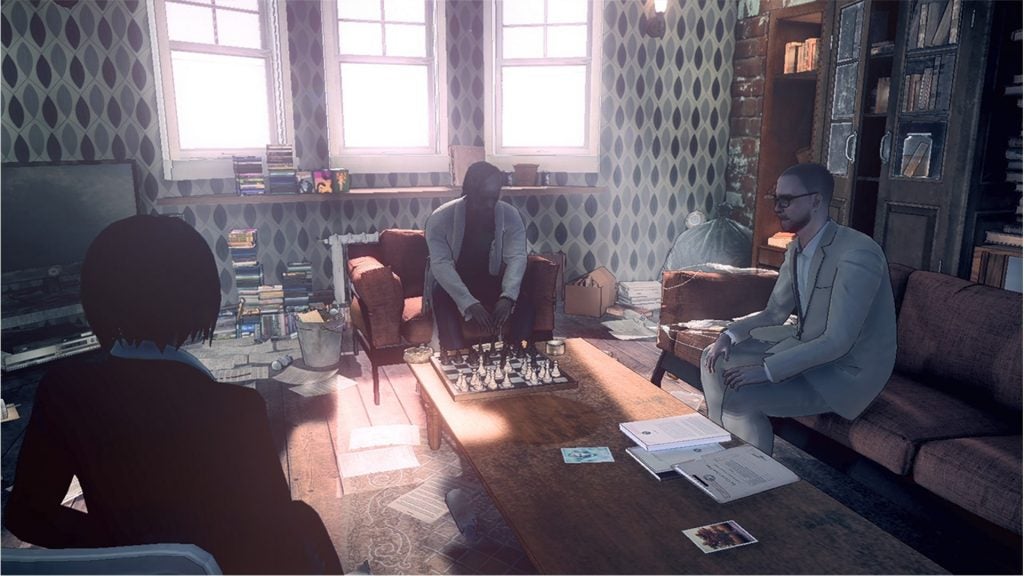 Le Carré is a picturesque vision of rural America. The locals are absurdly friendly, while the small town is surrounded by rolling hills and uncompromising swampland filled with all sorts of wildlife. You’re free to explore it all, although the aforementioned performance problems make that far harder than it should be. Throughout the main story I found myself dropping into local voodoo storefronts and the sheriff’s department in search of clues. There’s even a quaint bowling alley drenched in tributes to classic Americana.

You’ll come to learn the town’s layout with time, which is awash with quirky locations and characters I loved interacting with. Nearly every building houses a surprise, whether it’s an elderly woman obsessed with bowling in honour of her deceased husband or a jazz musician/bartender who refuses to wear anything but a single pair of revealing underwear. If you hadn’t guessed already, Deadly Premonition 2 is a bit weird. The real triumph comes from how it balances such absurdity with a dramatic narrative core which grabs you and refuses to let go.

That isn’t to say the central story doesn’t fumble, since it certainly does. One particular arc surrounding a transgender character is downright offensive, despite seemingly being approached with a progressive state of mind. The woman in question is a villain in the grand scheme of things, and despite some understanding from the player character, she’s subsequently misgendered, deadnamed and ripped of any validation in favour of a tragic conclusion. It left a bad taste in mouth, and a perfect example of how such identities shouldn’t be handled.

Not everyone will be taken with Deadly Premonition 2’s goofy approach to its world and characters. Francis York Morgan introduces himself to every new face he encounters, insisting they address him as York because “everyone calls him that.” So much of the experience is drenched in knowing cliche, from its camp locale to the endless movie references spilled out by York while exploring the town. I never expected Spaceballs to be referenced in 2020, but here we are. 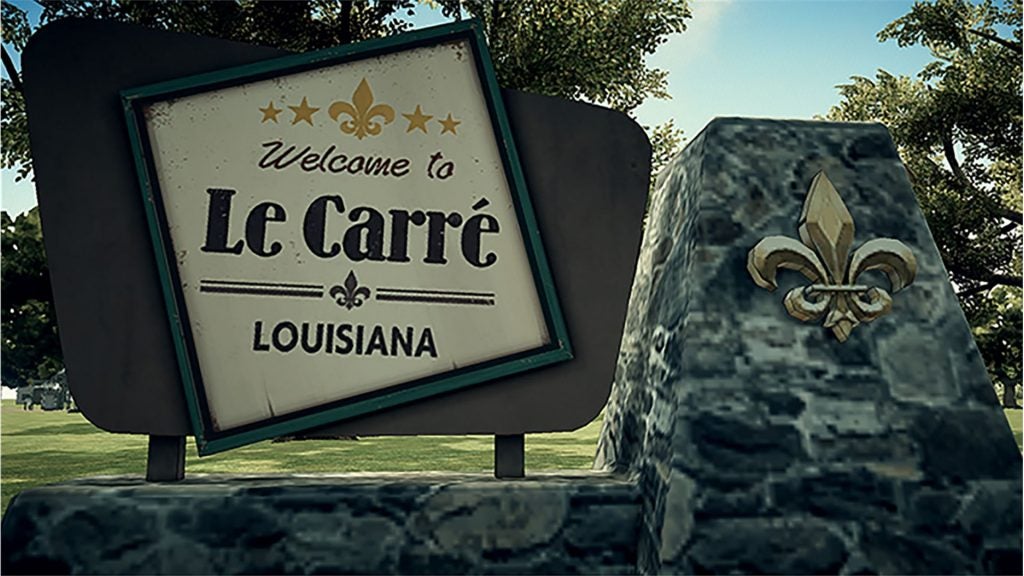 York has an omnipresent voice in his head known as “Zach” who he’ll frequently converse with about obscure references and wild observartions regarding the unfolding case. Zach’s existence has a deeper bearing on the plot than initially suggested, and it feels like other people in the world are far more aware of York talking to himself than before. It’s one of the game’s highlights, and arguably the weirdest thing in a sprawling melting pot of oddities.

Deadly Premonition 2 also dabbles in the paranormal, taking more than a little inspiration from David Lynch’s Twin Peaks. The majority of chapters will see you venture into strange realms known as “The Otherworld” where the bulk of combat and story revelations take place.  Armed with a pistol, York will find himself taking out strange, scythe wielding clowns and chained-up golems who can spawn forth strange, padlocked-shaped crabs that explode on impact.

To put in bluntly, combat in Deadly Premonition 2 is terrible. It plays like a bargain bin third-person shooter from 2006, with a lack of impact and constant performance problems making such sections an overlong nuisance to get through. While I loved the dark, crimson design of The Otherworld, they consist mostly of repetitious corridors and bland rooms where the same enemies spawn over and over again. It’s clearly a consequence of budget, which I can understand, but it’s just not fun to play.

Boss battles are equally underwhelming. You merely need to dodge a sequence of telegraphed attacks before filling your adversary with bullets. The majority of encounters are over in a matter of seconds if you possess even a modicum of competence in the game’s mechanics. This is a crying shame, since the paranormal atmosphere of Deadly Premonition 2’s world could have resulted in some fantastic ideas, but instead we’re given limp sequences which feel like an obstacle to the otherwise fantastic story. 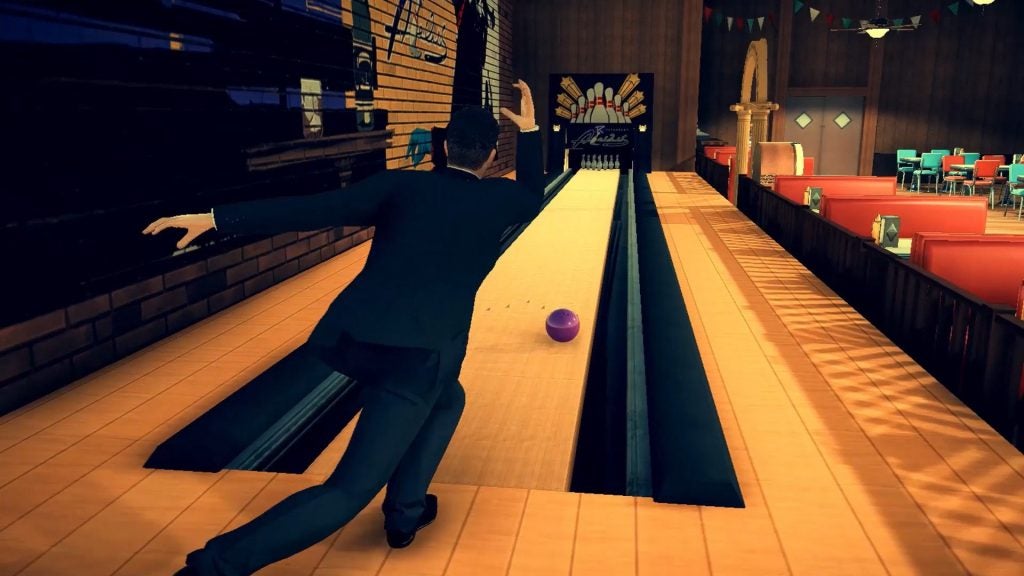 The local hotel is your base of operations, where you’ll need to sleep, shower and communicate with the unusual array of employees. All of them are seemingly the same person. However, in one of the game’s best in-jokes, they’re completely oblivious to the fact and outright deny it being a possibility. If you fail to pay for your nightly stay or don’t maintain your hygiene, you’ll be subject to heavy fines, which themselves are needlessly frustrating barriers to enjoying Deadly Premonition 2.

One early side quest involves fixing the hotel shower, having to interact with a trio of valves across the property. Unfortunately, you need to speak with three people in the hotel, each of which only appear at specific times of the day. The world runs on a 24 hour clock, so I had to constantly fast-forward time, randomly guess when these individuals would appear and pray they had the information I needed. It’s terrible, outdated game design which had me jumping through so many hoops I wanted to stop playing altogether.

Deadly Premonition 2 is filled with minute annoyances like this which hindered something I otherwise really enjoyed. The narrative and characters are mostly stellar, with the exception of some transphobic elements, and having their finest moments locked behind so much nonsense that made it difficult to move forward at times. There’s always a chance this release’s success could lead to a director’s cut on more powerful platforms, but for now we’re stuck with this.

Deadly Premonition 2: A Blessing in Disguise is a transcendent pile of garbage. It’s both strikingly ambitious and laughably incompetent in every regard, which is somewhat fitting given the iconic status of its predecessor. But all the campy brilliance aside, it’s difficult to overlook its monolithic performance problems and decrepit approach to game design, all of which hold it back from being something truly special. Ignorant attitudes towards LGBT identities only further feelings towards it, even if I genuinely adore much of what’s on offer here.