There have been some changes. Visceral has clearly tried to make Isaac a bit more responsive, and even thrown in a quick double-tap evade move, all with the aim of enabling larger-scale and more frantic battles. It half works, though there are times when the tight camera angles and slow turning speeds make such pitched battles a nightmare for all the wrong reasons. Otherwise, however, this is classic tactical dismemberment, only improved with the addition of bigger, better guns.

Let’s all say a big hello to Dead Space 3’s crafting system. Previously you had a series of engineering tools that could be repurposed as weapons, plus upgrade modules you could use to beef them up, Now, however, you have a cool build-your-own system, where you can construct weapons from their raw components and – effectively – make whatever you like. Want a wide-beamed slicing gun with an underslung flamethrower? Easy. How about an assault rifle with a necromorph-scattering force attack? Sounds good. 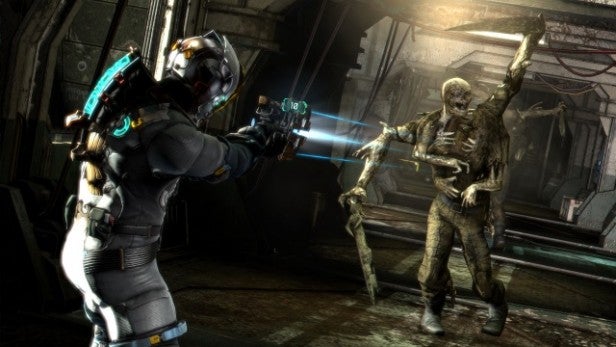 Plasma bolts, bolas, grenade launchers, magnums, shotguns and chainguns are all possible, and recipes for all can be found in-game. And with two weapons on-hand at any time, each with primary and secondary fire modes, you’re rarely left without a violent answer to any necromorphic problem.

Of course, this is where all that controversial premium content comes in. In our experience there are plenty of raw crafting materials to be found without ponying up for more, but you’ll have to save, prioritize and stamp every corpse and strongbox to loot everything before you can afford anything really good. Even with the introduction of robots who handle some of the scavenging for you, you need to pay attention and not waste anything.

Those who’d rather have it easy, by contrast, can just pay cash to EA and get a load of all the goodies without the attendant hassle. We don’t necessarily have a problem with this. We didn’t do it and it didn’t spoil our experience of the game. You, however, might consider it an affront to all that’s decent. That’s up to you. 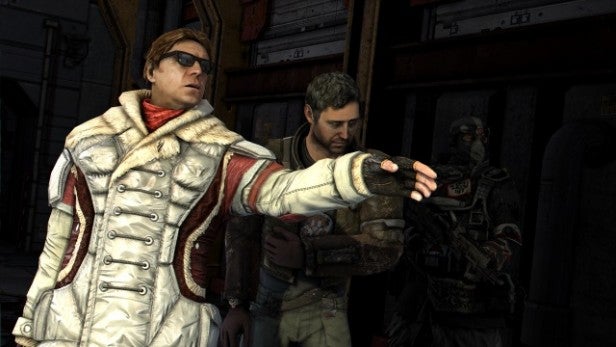 Here’s the thing. Once you get past your disappointment that Dead Space 3 has left its survival horror past behind, you grow to appreciate how good it is at what it does. It is a dumb rollercoaster ride of a game, but it’s a very effective dumb rollercoaster ride of a game. The story, which throws up the most pitiful rationale to drag Isaac through a series of abandoned spacecraft and onto the surface of a frozen planet, is almost pitifully weak, but it serves to push you through a series of slow explorations, frantic firefights and cool floating-around-in-space bits that thrill and please in exactly the way a dumb rollercoaster should. The pacing isn’t as tight as it could be, there are odd stretches of backtracking and you’re sometimes left feeling that Isaac is being treated as an odd-job man (starting generators and fixing doors a specialty) but it works.

And Dead Space 3 is a generous game. There’s a good fifteen to eighteen hours of campaign here even if you don’t tackle all the optional missions, which are worth doing if only for the loot. Then we have the co-op options. Dead Space 3 has managed to cram in a drop-in/drop-out two-player co-op mode that doesn’t feel tacked on, yet doesn’t encroach on the single-player experience either (Resident Evil, please take note). 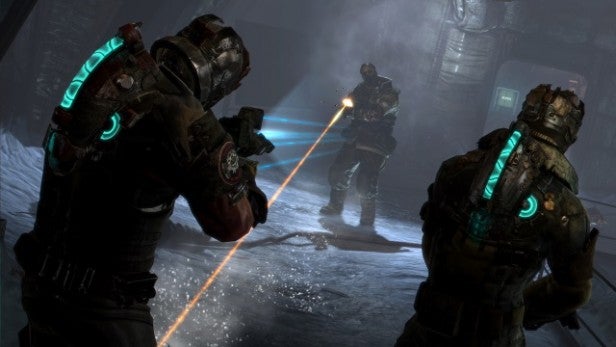 Play the game solo and you need never know the co-op mode exists. There’s no stupid AI-controlled sidekick, and Dead Space 3 plays out much as it did before. But when you play co-op it makes a lot of sense, with a nice line in ‘cover me while I do this’ dynamics and a caring, sharing attitude to healing and loot. We couldn’t say Dead Space 3 was better played co-op or single-player – it’s a different and exciting game played either way. Of course, it’s annoying that you often have to wait to join a game, while dropping out throws the other player back to the last checkpoint, but we’ll assume there are technical reasons involved.

So, the score? Part of us wants to kick Dead Space 3 with a six or seven and teach it a lesson, not just because Visceral has abandoned the game’s roots to the displeasure of fans, but because the storyline is weak and there are too many cheap and irritating tricks deployed. Yet the simple, sad fact is that we can’t stop playing it. It is compulsive. It is fun. It is exciting, slick and often spectacular. It has an excellent co-op mode and one of the best weapon crafting and customization systems of any action game we’ve played. In short, it feels, like an eight. Feel free to moderate this score according to your love of Dead Space and survival horror, your hatred of EA, your dislike for sci-fi horror clichés and the mood you woke up in this morning, but at the moment, eight feels right to us.