A robust combat system, plentiful characters and a meaningful progression system combine to create a worthwhile fighter that I'd recommend checking out.

The Dead or Alive franchise is renowned for draping overtly sexualised characters on top of robust fighting systems. That reputation is understandable, given how older titles such as Dead or Alive Xtreme 3 had you ogling young women on beaches, or even delving into virtual reality depravity if you so chose. It’s all a little gross.

But from what I’ve played of Dead or Alive 6, it’s clear that Team Ninja has taken the criticism on board, toning down the boobs and butts, instead focusing on what really matters – a fighter that feels fun to play. While light in mechanics compared to its competitors, Dead or Alive 6 is a great, initially simplistic 3D brawler that hides plenty of depth inside its many characters and systems.

It does falter due to a lack of in-depth modes and fairly nonsensical story, but there are still plenty of laughs to be had, both alone and with a couple of friends by your side. 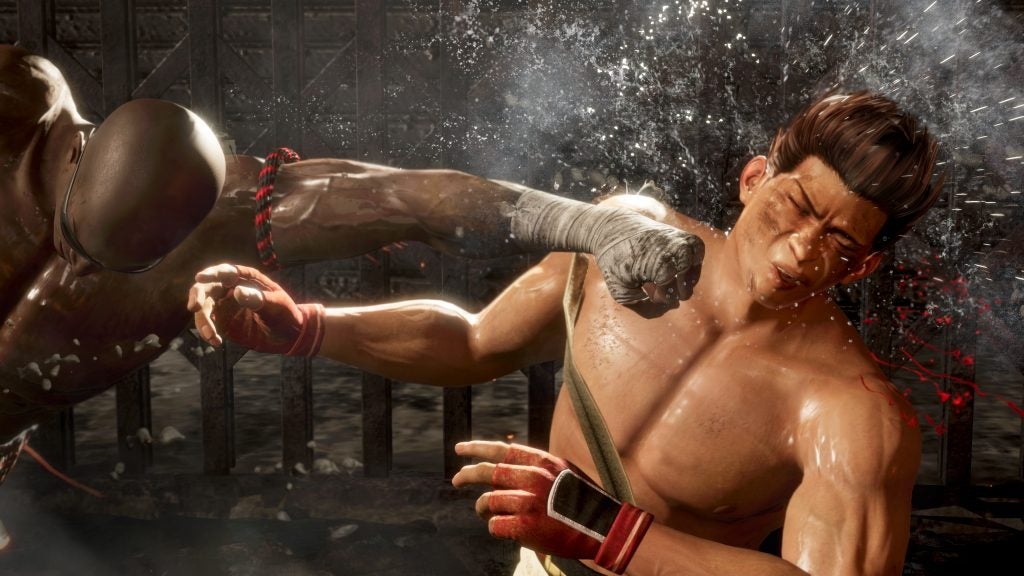 Dead or Alive 6 is a surprisingly pedestrian affair when it comes to modes. It doesn’t offer much beyond the fighter wheelhouse that we haven’t seen before, and new additions never really blew me away. That being said, the likes of Story mode, Arcade and DOA Quest still kept me occupied for a good number of hours. A large roster of characters that includes several newcomers is also a welcome treat.

NiCO, a scientist working for a mysterious corporation known as MIST, is a highlight. Sporting bright-blue hair and a fabulous assortment of outfits, she makes a wonderful impression before you’ve even lifted the controller. Once you have, with only a few buttons you’ll be unleashing fierce elemental combos that blow enemies away with sudden strikes of lightning.

Diego is another fledgling fighter who, while fun to play, isn’t nearly as impressive. His design is relatively generic and his time in Dead or Alive 6’s branching narrative never really gives him room to grow. Brief criticisms aside, they’re both welcome members to the roster, helping make DOA6 feel like a true sequel instead of an incremental upgrade in the way of Last Round before it.

Series veterans will find all of their favourite faces in Dead or Alive 6. Kasumi, Ayane, Marie Rose and Ryu Hayabusa all return, updated with new costume designs and advanced movesets. They also have lots of costumes to unlock, which is where much of the game’s toned-down fan-service is hidden away. Short skirts and open tops are in abundance, although there’s definitely a handful of stunning cosmetic skins amongst them.

It still feels a little sleazy and uncomfortable, if I’m honest; however, it’s a far cry from the outright exploitative nature of past titles. Ahead of release, fans have also discovered that the destructible nature of clothing on younger characters such as NiCO and Marie Rose have been toned down, which is welcome. Fighters and their outfits will become ripped and awash with dirt as combat progresses, but this rarely feels like an excuse to get everyone’s clothes off. 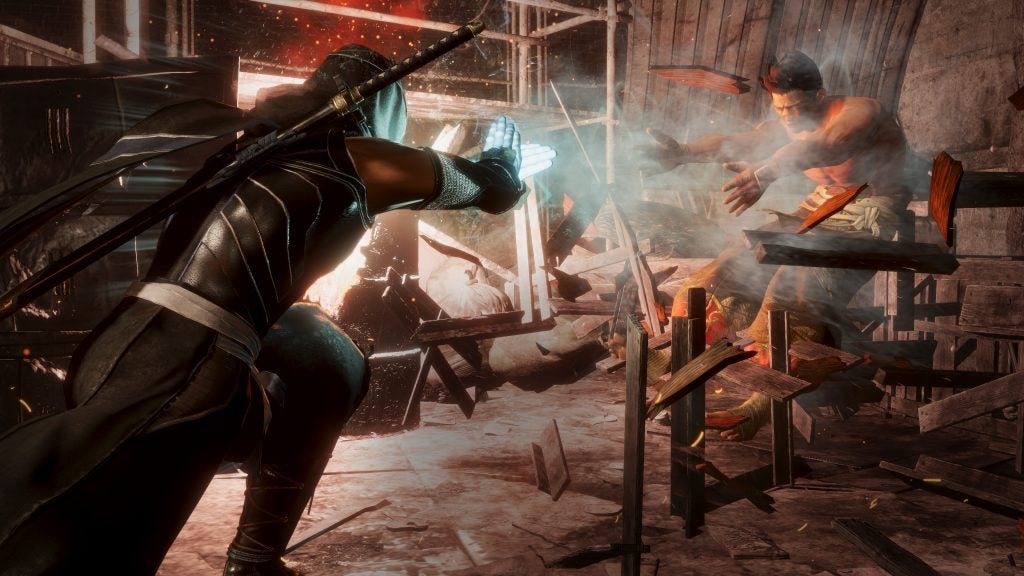 The Story mode is one of the main attractions in Dead or Alive 6, and it’s a largely competent, fairly incomprehensible adventure. Taking place across several chapters, you’ll play through brief stages that normally involve a small cut-scene before erupting into a battle for some silly reason. Characters will choose to duke it over long-held family feuds, or simply because they’re looking to practice their skills.

I’m totally picking a fight with my colleague the next time cheese disappears from the office fridge. In real life you’d probably just have a chat, but not here! You’re always hopping between different fighters, through brief yet exciting encounters. It’s hardly challenging, but I’d recommend new players run through this to get a feel for the entire roster. For a long-winded, quirky tutorial, it’s excellent.

However, don’t go into Dead or Alive 6 expecting an impressive pedigree in storytelling. In the main, it’s loosely connected events leading to the latest Dead or Alive Tournament taking place amongst a growing conflict. I found a lot of enjoyment in the cheesy cut-scenes and over-the-top voice acting, but it simply doesn’t reach the narrative heights of titles such as Soul Calibur 6 and Dragon Ball FighterZ. 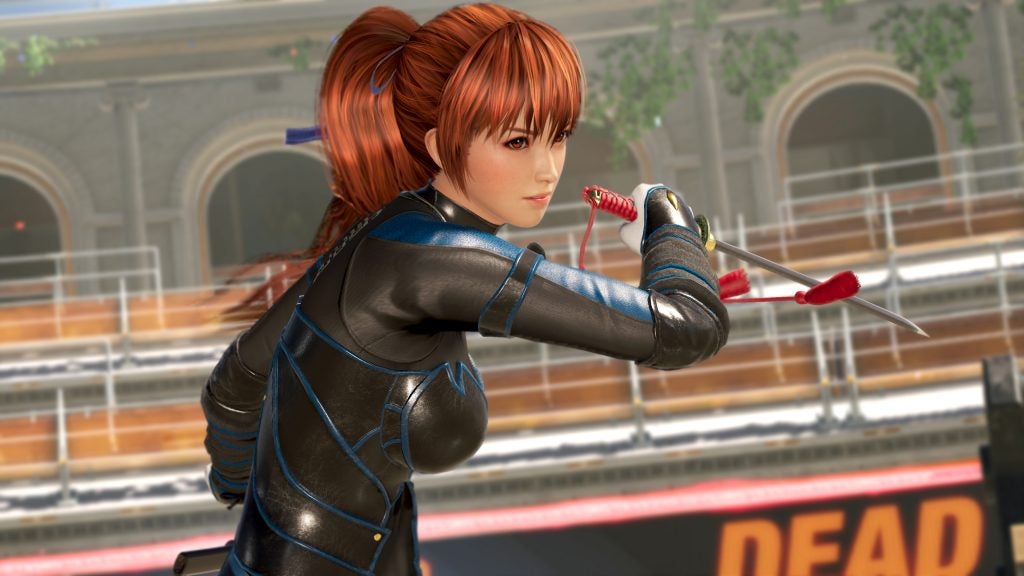 Kasumi swaps her skimpy original outfit for a badass bodysuit

DOA Quest is a mode that requires you to have a little more finesse if you’re to succeed, with you having to complete three distinct objectives across 104 bespoke levels. All focus on specific fighters, growing in difficulty with each passing victory. Once again, it feels like a perfect battleground to hone your skills before diving into the trenches of online play.

If you’re struggling to clear a specific goal, Dead or Alive 6 kindly directs you to a tutorial where you’re walked through things in the simplest terms. I’m far from an expert in the genre, so appreciated this level of accessibility, and can see many other players feeling the same. That isn’t to say it’s all sunshine and rainbows, since I promptly got my butt kicked once going online.

Sadly, the online portion of Dead or Alive 6 is far from perfect ahead of launch. There are only a few playlists to choose from and it can take a while to find an opponent, although that will definitely change once the game is in the hands of a greater number of players. But the problems don’t stop there, as I soon discovered. Even on a stable connection, there’s a bit of input latency, but nothing that caused me to throw a victory.

The major issue comes from the stages themselves, with geometry frequently blocking the view of both players when you’re backed into a corner or moving through destructible scenery. When playing with a friend we both noted this problem to be quite substantial, making it impossible to see what our characters were doing. It seems like a big oversight – although, thankfully, it doesn’t apply to all stages in the game. 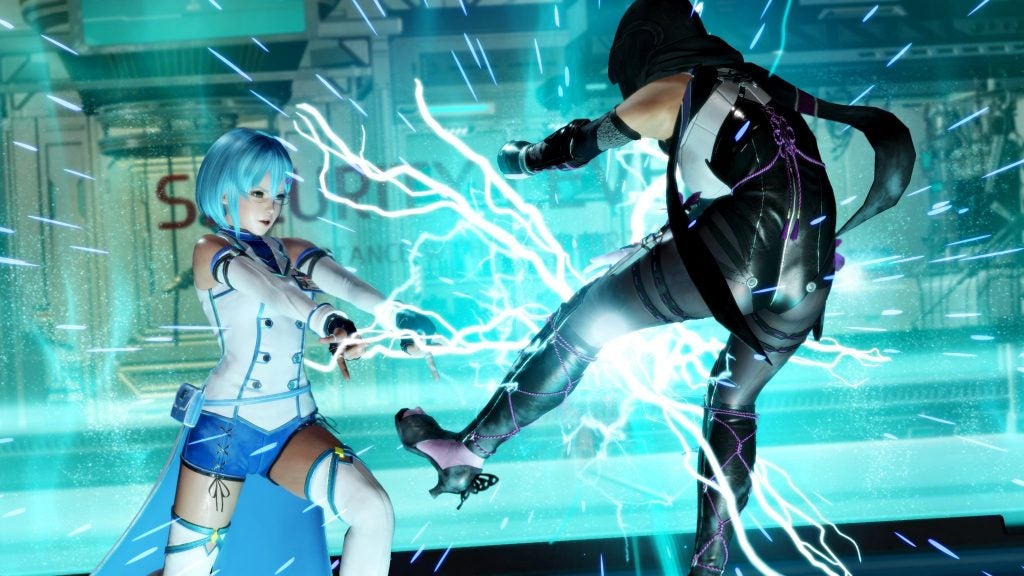 NiCO is a newcomer to the series and is capable of zapping enemies with lightning. Taste it!

There’s no need to worry about Dead or Alive 6 overwhelming you, since combos are split between four simple actions – punches, kicks, throws and holds. These are all assigned to the controller’s face buttons, and once you learn the ropes of certain characters, stringing together combos becomes trivial.

DOA6 can also be played as a bit of a button-masher, making it easier to play alongside friends without trawling through move lists for hours on end.

For casual players, you can jump in and have fun within a few minutes, while the hardcore still have a deep and progressive range of systems to master in competitive play. I just hope the lacklustre online options grow with time, since right now it’s designed so obtusely that finding your feet can be frustrating. For example, you have to leave a lobby to change your fighter and stage, which is needlessly frustrating.

Dead or Alive 6 is an enjoyable fighter, with a lot going for it. Koei Tecmo has looked back on the series’ somewhat juvenile history and decided it’s time to grow up.

Well, sort of. Sexualised fan-service is still here if you’re willing to dig for it, and some of the character designs might rub you the wrong way, but it’s far from a deal-breaker and no longer defines what DOA is all about.

A robust combat system, plentiful characters and a meaningful progression system combine to create a worthwhile fighter that I’d recommend checking out. It certainly isn’t the finest the genre has to offer, but it does more than enough to stand out.