Available on Xbox One, PS4 (reviewed)
Two things can’t help but dominate the conversation about Dead or Alive 5: Last Round: the series’ slack-jawed, bulging-eyed obsession with the wobblier parts of the female anatomy, and the way it’s being sold this time around.

On the first count, there’s not much defence beyond a feeble ‘well, it’s all a bit of fun, isn’t it?’ With its lingering shots of heaving cleavage, its hyper-sexualised characters and a range of unlockable, alternate costumes that include bunny girl outfits, bikinis, T-shirt/knickers combos and racy evening-wear, it’s safe to say that Dead or Alive 5: Last Round doesn’t exactly do much to boost the cause of feminism. Sure, there’s a playful, tongue-in-cheek element to it, but we’ve sometimes found Last Round just, well, embarrassing. What used to look a bit dodgy is now getting desperately cringe-worthy. 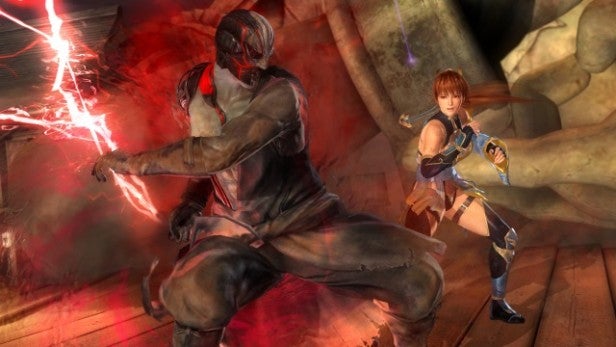 On the second count, it all depends on how you buy it. You can download a free version, Dead or Alive 5: Last Round – Core Fighters, which comes with only the basic versus, arcade, training and online game modes, plus four fan-favourite characters to enjoy them with. On top of this, you can buy the story mode separately for £11.99 and additional characters at £3.19 a pop.

It doesn’t end there, however, as you can also buy extra costumes for these characters for a few extra pounds. Put it all together, and you could spend hundreds on Last Round. Alternatively, you could just pony up £31.99 (or less at your local game store) and get all characters and game modes bundled in. Even then, though, the costumes are an optional extra.

In a way this is a good thing. We can see a few people giving the Core Fighters bundle a quick go, buying a few extra characters, maybe ponying up for the story mode and then leaving Last Round there, having only spent fifteen to twenty quid. All the same, it’s also easy to see the negative impact this might have on the game. While the story mode gives you a chance to try out different fighters for size, there’s less incentive to give new fighters a go and learn their moves in the other modes when you need to pay for them one by one. Inevitably, this Pay as you Go model will end up with some players splashing out more cash, and others missing out on all the game has to offer. 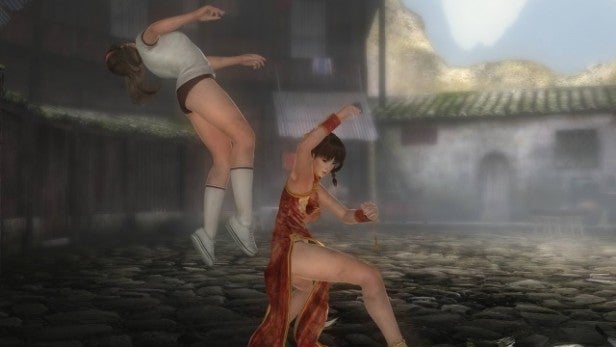 Nor has a disastrous and confusing launch helped, with the full game launching on PSN nearly a week after Core Fighters, meaning some players might have splashed out already rather than waiting to buy the full game. Xbox One owners, meanwhile, have reported bugs and painful moments of slow-down, so it’s worth keeping an eye on the forums if you’re planning to get that version.

The sad thing is that all this stuff distracts from the fact that this is the one of the strongest entries in the Dead or Alive series and a great example of the fighting game at its most accessible and enjoyable. While we’re still waiting for a genre-redefining next-gen beat-em-up, Last Round is a fine way to fill the empty hours.

Of course, it’s not exactly new. In fact, it’s something between a full HD remaster of 2012’s Dead or Alive 5 and an extended edition, bundling more on top of 2013’s bumped-up Dead or Alive 5: Ultimate. The existing roster of characters, including Virtua Fighter’s Akira, Pai. Sarah and Jacky, is now bolstered by a new female character, Honoka, and a classic DoA villain, revived as a killer cyborg. We also get two more stages and even more costumes to unlock, taking the total number across all characters to over 400. 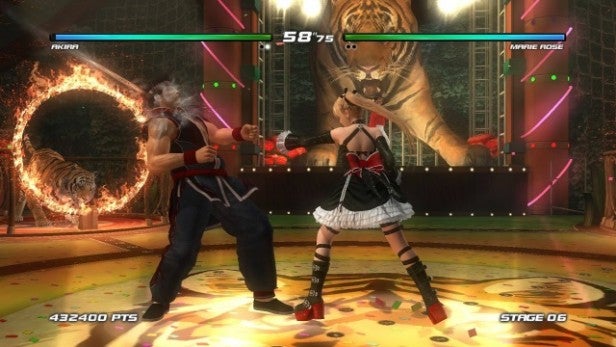 Most obviously, the visuals get a bump to 1080p, with a new ‘soft engine’ that makes skin look more realistic, enhances the lighting and tweaks those all-important soft-body physics. No prizes for guessing which soft bodies the developers have focused on simulating more dynamically.

There’s no confusing this for a proper next-gen game; despite some new high-resolution textures, it hasn’t got the detail of an Assassin’s Creed: Unity or The Order: 1886, and the fighters still look more like sexed-up shop mannequins than anyone’s idea of a real person.

Yet, at the same time, Last Round looks great. From the fluid animation to the lustrous, flowing cloth in the costumes, there’s always something worth looking at on-screen. The stages, meanwhile, burst with detail. Whether you’re fighting on the street, in an arena, in the snow or – bizarrely – inside a circus ring complete with rings of fire and leaping tigers, Last Round does its best to give your eyeballs a feast. 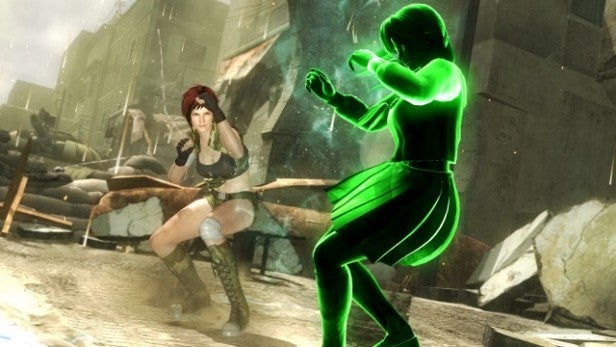 So much attention is focused on Dead or Alive’s most obvious attractions, that people often underestimate its gameplay, but this is a mistake. The original DoA took inspiration from Virtua Fighter, and if you’ve played Sega’s legendary beat-em-up, a lot here will seem very familiar. It’s no coincidence that Akira, Pai, Sarah and Jacky all fit in so well with the established cast.

At the same time, it took a little of Tekken’s hard-hitting attitude, and Last Round definitely has some of the Namco game’s aggression and pace. It’s a game where timing, counters and combos still have an impact, but where there’s still some room for casual button mashers to make headway, and it’s not as technical a fighter as the Virtua games. Some might say that makes it sloppy, but from our position, it makes it accessible and a bit of a riot.

One thing Dead or Alive does really well is interaction with the scenery – something Team Ninja introduced with Dead or Alive 3 and has worked on ever since. Opponents can be smashed through barriers, tossed over precipices and thrown against certain elements for extra damage, all of which gives the combat a more physical, epic feel than it does in some more conservative rivals. 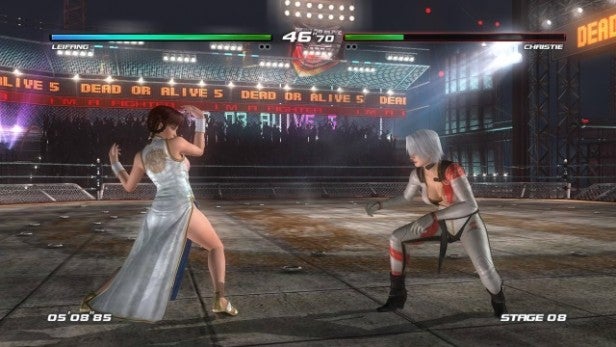 Like Tekken, it’s still best enjoyed in versus mode, with a bunch of players sitting around the same screen, battling it out for bragging rights and glory. If you’re a solo player, however, then the Story mode is well worth shelling out for. Instead of a separate storyline and cinematics for each combatant, Last Round combines all the characters into one long and peculiar saga that throws in ninja clans, rivalries, difficult family relationships and the search for a clone secret weapon.

It’s the worst kind of nonsense, of course, but you don’t have to take it seriously. The important thing is that it gives you a chance to try out the whole range of fighters against each other, and see a tour of all the game has to offer. The difficulty scales up fairly slowly, so it’s a good way for newbies to acclimatise, but there’s enough challenge later on to make you work for every victory.

Beyond this we get training modes, a rather odd CPU vs CPU mode with built-in photo mode, plus online play. At the moment matchmaking could be smoother and we’ve had seriously long waits to find another player, but once the action kicks off it’s smooth and lag-free. Those with friends into fighting games should find it easier to get a match.

See also: Great Xbox One and PS4 Exclusive – When will we get them? 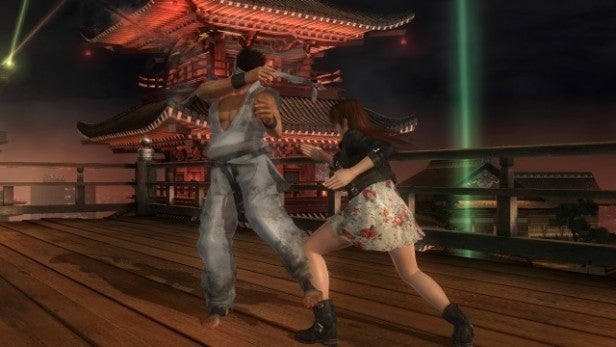 Is there enough here to justify a purchase if you played Dead or Alive 5 already? Probably not. Two new characters and some visual tweaks don’t make for an all-new experience, and there are bigger, better fighters around the corner. If, however, you haven’t played a Dead or Alive for some time then Last Round is an easier recommendation. It might not be new or revolutionary, but that doesn’t mean it isn’t fun.

Verdict
The optional PAYG purchase model and cringe-worthy sexy lady stuff might distract you from the fact that this is a hugely entertaining fighting game. Slick, spectacular and fun to play, Last Round is right up there with the best games in the whole Dead or Alive series, and one that’s worth paying upfront for if you don’t want to end up paying over the odds. It’s not a must-have for those who’ve already played Dead or Alive 5: Last Round on other formats, but if you haven’t, it’s a good time to give the game a try.