It’s safe to say that the Dead or Alive series has more than its fair share of knockers.


Some people hate it – with a passion – but why? Let’s run through the charges: eye candy covering up for a lacklustre fighting system; gratuitous T&A at the expense of real innovation; me-too characters; ludicrously inconsistent game AI. Guess what? They all have a ring of truth, and they all apply to DoA4. Yet that shouldn’t blind you to one simple thing: the series first 360 outing is a blast. While it’s suspiciously rough around some of its edges, I’m still hard pressed to name a more entertaining fighting game I’ve played in recent years. 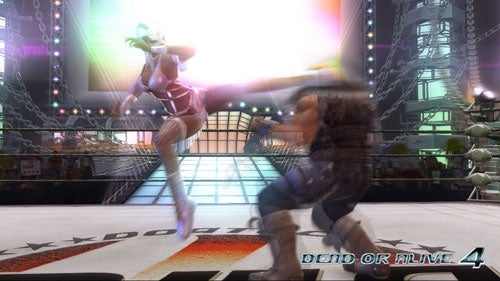 I must admit that a lot of this is down to the eye candy factor – in fact, to be more honest than I’d like, some of it’s probably down to the T&A. Amazingly, the series’ sexism has actually got worse: the breasts are getting bigger, the costumes are getting smaller and the underwear shots are on the increase. One end-of-story cut scene has the character’s breasts being groped, while another sets an assassination in a strip club. Were I a fifteen year old boy I might think I’d died and gone to heaven, but as a grown man I find it all a little bit, well, embarrassing. 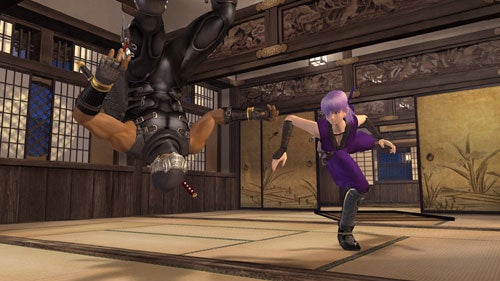 Still, all the curves and cleavage look astounding, as does everything else in the game. Perhaps some feel that the characters could take on a more ultra-realistic appearance, but I quite like the contrast between the ridiculous detail in the background scenery and clothing and the anime style of the fighters themselves. And where there is detail, it’s gorgeous. From the embroidery on Lei-Feng’s Chinese gowns to Ryu’s burnished armour to the sequinned strips and shiny textiles of new character, La Mariposa, this is one of those games that just looks better the more you stare. The animation, meanwhile, is simply top notch – fluid, filled with weight and substance, and perfectly, dynamically composed. 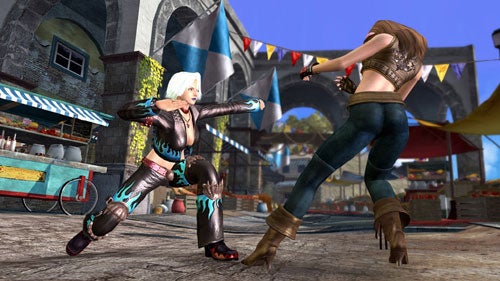 And if the fighters look great, their environments are doubly so. The biggest levels are now enormous, sprawling affairs, full of steps to be knocked down, windows and walls to be pushed through, and water to wade through while you’re trading blow for blow. There’s an amazing jungle temple with an audience of jeering monkeys, a fantastic Vegas street-scene with cars streaking through while bystanders idly watch the action, and some ludicrously pretty scenes in a Kyoto garden. The lighting, with some beautiful HDR stuff has to be seen to be believed. I’m told that some have found DoA4’s graphics underwhelming – that it looks too much like a current generation game. Perhaps they’re playing it on a 14in ALBA TV, because on a half-decent high-definition screen that’s simply not a sensible conclusion. 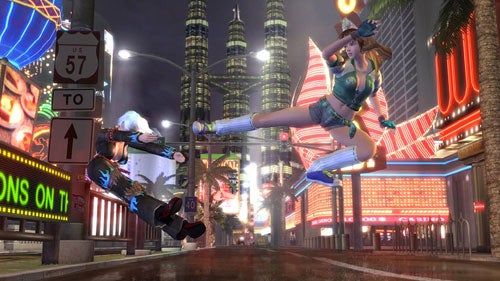 Admittedly, there are some rough edges. For the most part, the hair looks amazing, but there are times when it just flows in the wrong direction or simply looks odd. There are also two stages – an animal filled safari scene and a dinosaur filled research area – that look thrown together, with odd shadows missing and the local fauna seeming mute and unresponsive. If we must pick holes in these wonderful graphics, then these are probably the biggest ones to pick.


In terms of characters, we get the usual DoA stars – Ryu (ninja), Bass (redneck wrestler), Lei Feng (kung-fu babe), Kasumi and Ayame (ninja babes) – plus the return of some old favourites such as Christie (kinky leather-clad assassin) and Brad Wong (part rock-god, part drunken master). New contenders include Kokoro (wannabe geisha), La Mariposa (masked wrestler in bikini) and Eliot (wussy-looking young apprentice). Kokoro has a nice range of high-speed punches and deceptive combos, while La Mariposa offers a more direct fighting style than most of the wrestler types, making her a good bet if you like grappling but want more straight offensive power and speed. Eliot seems useless at first – and worst, they’ve gone and made him British – but he’s actually fast and fluid if you can chain his moves together. All in all, this is a great roster of fighters, and the fact that most feel cribbed from Tekken or Virtua Fighter stereotypes can’t change that. If only Tecmo could do something about the single-player storylines. The central plot seems to have something to do with persecuted ninjas and a plan to blow up the sinister DOATEC headquarters, but if you can work out what’s going on you’re doing a whole lot better than I. At one point a fight breaks out over a vegetable. I ask you, why? 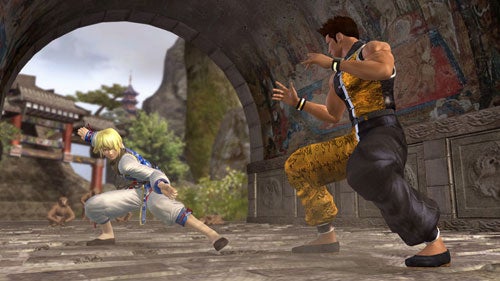 Now, the worst accusation against DoA has always been that it’s all about the visuals, not the combat. In fact, I’d say this is more than a little unfair. Sure, Virtua Fighter has a more elegant, balanced and precise fighting system; that’s why it’s always going to be the choice for the hardcore fighter, and why it’s always going to be a bit impenetrable for the novice. Tekken, meanwhile, has a more straightforward, uncompromising brutality, and probably the more exciting collection of combos and special moves. However, DoA’s system is accessible, versatile and deep, with a great range of moves, counters and combos, and a grappling system that actually works. I can appreciate that, on a technical level, it’s not quite up there with Virtua Fighter, but (whisper it) it might actually be a bit more fun to play. 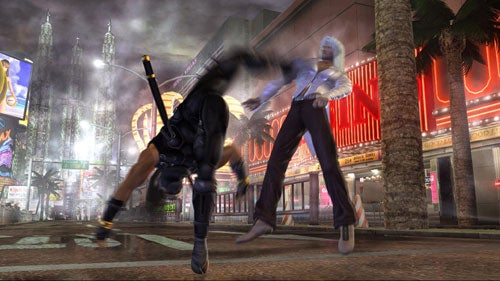 It’s not dumbed down, either. Button mashing will get you part of the way through the single-player mode, but at some point you’re going to have to think tactically. And while there will be times in the seventh or eighth bout when the computer player demolishes you without mercy, there is always some way out, either by playing to the strengths of your character, or by playing against the weaknesses of his. Only on a few occasions did I feel that I could only win through persistence and luck.


And the single-player mode continues to hold my interest long after I’ve seen enough to write this review. Partly, that’s because I’m curious to see what more ridiculous or worryingly pervy costumes the game might have in store, but it’s also because the unlockable characters and levels are worth the winning. As you may have heard, a female Spartan from Halo and matching space station arena are there for the taking, if you have the time to spare. DoA4 holds a horrendous “just one more go” lure for me. However hard the kicking, I just keep coming back for more. 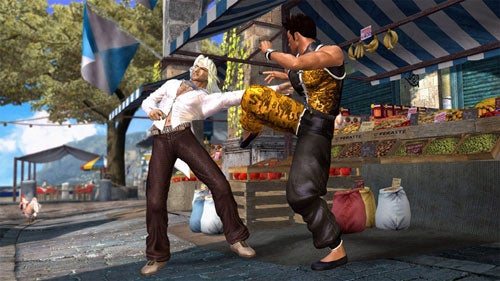 However, as everyone knows, the real key to a fighting game’s longevity is the multiplayer action. One on one on the same TV screen, DoA4 works perfectly. The solid roster of characters offers plenty of variety, and there’s always some hope if someone feels unbeatable in an evening of winner stays on. If only the same could be said of the game’s online mode. 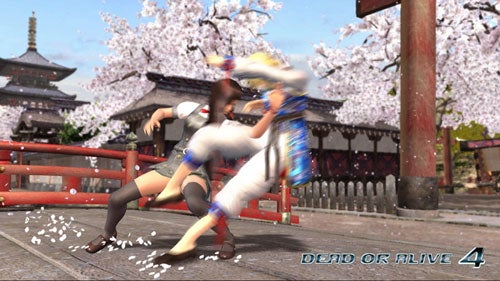 It’s actually quite well put together, with a slick customisable lobby system where you can take your personalised avatar and watch and join in matches. The problem is lag. Playing the game before release, I was happy to put it down to the fact that I was mostly watching or playing US-based matches, but now that I see UK and European games descend into chugging, slow-moving nightmares I have to worry. It is possible to get a smooth, fluid game – just look for three bars in the connection speed meter and hope for the best – but the actual gameplay seems to be affected by who else is in the lobby, meaning that if someone joins with a less than perfect connection, the match starts grinding to a halt. It would be nice if someone could fix this, and soon. 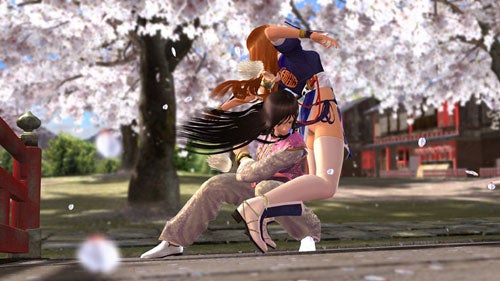 It’s a shame that something that should have been an enormous plus should turn out as a minus for this otherwise fabulous fighter. Dead or Alive 4 might never have the hardcore cachet of the Virtua Fighter or Tekken series, but those of use who care little about the minutiae of the genre shouldn’t worry: this is a dazzling, thoroughly enjoyable beat-em-up, with a lot more to offer than the obvious bouncing breasts.