Everyone remembers where they were the day they watched that incredible Dead Island “announcement” trailer back in 2011 – you know, the one which plays backwards and stars a cute little girl who – as the melancholic trailer progresses – we learn has been bitten by a zombie on a plague-ravaged holiday resort. As trailers go, it was a masterpiece of inventive pacing, stirring music and shameless heartstring-tugging, but what wasn’t heavily publicised at the time was the fact that it was created by an entirely different studio to the one actually making the game. Aside from the setting, the impressive footage bore no resemblance to the finished product.

You could therefore argue that Dead Island is better remembered for its trailer than anything else, but that is doing the game a massive disservice. While Dead Island: The Game didn’t have the same emotional impact of Dead Island: The Trailer, it still offered a unique take on the survival horror genre, skillfully incorporating the kind of action RPG mechanics that the Fallout series does so well these days – so much so that it’s now receiving the customary next-gen remaster, along with its very similar 2012 sequel, Dead Island: Riptide.

Assuming the role of one of four survivors – all of which are immune the the zombie virus which has blighted the otherwise idyllic Pacific island of Banoi – your most pressing objective upon starting the game is simply to survive. Fighting your way out of your hotel allows you to meet up with some other survivors, and you’re soon roped into completing quests which involve collecting items, scouting locations and generally improving you and your group’s chances of seeing the sunrise the following day. 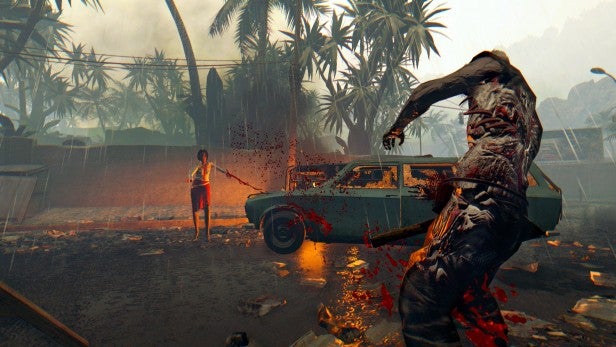 Like Fallout, you play Dead Island from a first-person perspective. Initially your weapons are all melee-based, but you can mix things up with kicks and punches – although it’s rarely advisable unless you have no other options at hand, as zombies tend to attack en masse and require multiple hits, even when you’re using a fairly sturdy metal bar. Another element borrowed from Fallout is the ability to target different limbs; scooping out a leg will cause the assailant to fall, but blows to the head are always the most effective means of putting a zombie down – they’re also tricky to line up, especially when the attacker is on their feet and lurching unpredictably for your jugular. There’s no V.A.T.S. to aid your tactical blows here, either – it’s a matter of carefully aiming the reticle and hoping it latches to the right body part.

Weapons can also be thrown at enemies, with knives and machetes providing incredibly satisfying one-hit kills when used in such a fashion. Weapons have a limited lifespan and break over time, although they can be repaired at the various workbenches you find dotted around the island. Repairs – as well as upgrades – can only be carried out by spending cash, but as you might imagine on a holiday resort where practically everyone is dead, there’s plenty of spare dollar lying around should you take the time to look.

In fact, rummaging through the pockets of fallen foes and rifling through discarded suitcases is all par for the course in Dead Island; doing so yields items which can be used to craft new weapons and upgrades, as well as documents which flesh out the storyline. You’ll also want to make regular stops to swig from one of the many energy drink cans that litter the environment – these replenish health but must be consumed on the spot. Other restorative items can be found, but are in much shorter supply.

While you do gain access to firearms later in the game, they feel strangely muted compared to the frankly ridiculous melee weapons you can craft once you have the right materials and blueprints. It’s possible to fuse together seemingly random items you’ve scavenged and equip yourself with tools which electrocute, eviscerate and dismember with alarming efficiency. By the time you get your hands on a gun, it feels like an anticlimax – especially as ammo is painfully limited; it’s much more fun to create crazy death toys using duct-tape and glue.

Because this is an RPG as well as a zombie decapitation simulator, your character earns experience points from enemy encounters and completing quests. Move up a level and your stats gain a boost; you also get a skill point to assign to one of the various skill trees which are unique to each character. Some of these unlock special abilities while others trigger unique buffs that prove invaluable when you’re surrounded by flesh-eaters and down to your last flimsy plank of wood. Others are downright hilarious, such as a skill which allows one character to throw an item and have it magically return to his hand, boomerang-style. 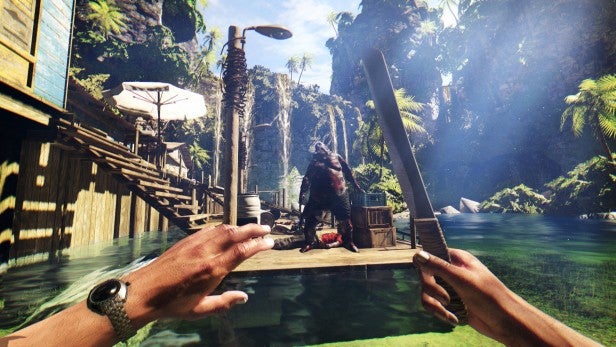 While many of Dead Island’s funniest moments are definitely intentional, there are still a few bugs present which cause unscripted chuckles – which is a bit of a disappointment as the game is now five years old and developer Techland has had more than enough time to iron out all the kinks. While this remastered edition isn’t anywhere near as buggy as the 2011 original, I still spotted my fair share of phantom floating limbs and zombies stuck in walls. Granted, the physics engine on show here allows for some impressive dismemberment but the first time you see an arm happily rolling around the floor of its own accord, it rather breaks the illusion.

While Dead Island might sound like a solitary experience – especially when you factor in the many comparisons made to solo RPGs like Fallout – it actually boasts a co-operative multiplayer mode which is active at all times. You can embark on missions with other players and gain a share of whatever loot and experience your party receives – although it’s worth noting that the number of enemies you face scales the more players are involved. Dead Island in co-op is a fun experience, especially when you unlock more skills and can dream up crazy tag-team tactics for taking down the tougher enemies, but it nullifies the games scarier moments; exploring darkened locations with your flashlight isn’t quite as tense when you know you have allies right behind you, ready to bury their electric cleavers into the craniums of any zombies that happen to be lurking in the shadows. 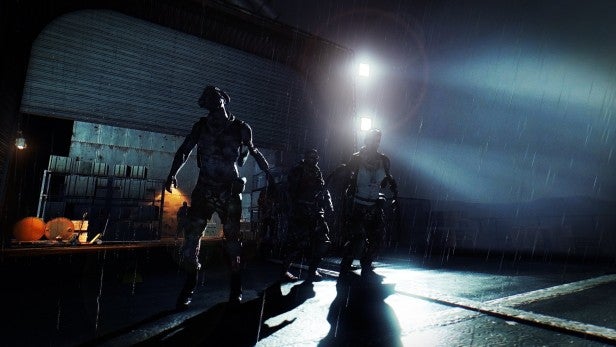 As you might expect from a next-gen remaster, Dead Island’s visuals have been spruced up for this release. The frame rate still feels a bit jerky but graphical detail is certainly improved, with new lighting effects, anti-aliasing and focus blurring adding to the realism; all in all, this is a striking game on a purely aesthetic level, especially when you consider the large and feature-rich environments. Character models still come across as a little goofy in the game’s cutscenes, despite the bump in complexity – fingers don’t seem to move, which means that characters wave their hands around in strange karate-style motions when talking.

Also included in this package is the aforementioned sequel, Dead Island: Riptide. It’s actually a bit of an exaggeration to call it a sequel, as it’s generally more of the same and could have been released as an expansion to the main game. It’s well worth playing and doubles the 30-odd hours that Dead Island offers, but the lack of fresh content is a little disappointing. Another oddity is that with the PS4 version, Riptide isn’t actually on the disc but instead is offered as a download code – so beware if you choose to pick this up second-hand. The Xbox One edition has both games on the same disc. Also included here is Retro Revenge, an old-school scrolling fighter which tries to pay tribute to the likes of Double Dragon and Final Fight with its visuals, but in reality owes more to mobile phone “endless runners”, with little direction control being given over the action. It’s a throwaway addition.

Dead Island faced some stiff criticism upon its original release back in 2011 but it’s hard to tell if this was more a case of deflated expectations after that amazing trailer than genuine umbrence with the zombie-splatting action. Viewed in 2016, the game is an engaging if rather clunky action RPG which has benefitted greatly from some next-gen TLC. While the objectives become repetitive over time and there are still a few bugs that need squashing, the visceral combat and sheer variety of weapons on offer maintain your interest for the 30 or so hours you spend on the blood-drenched fictional island of Banoi.