Its mixer carafe can now take on cold drinks as well as hot, so you can make iced lattes or espresso martinis. The machine itself offers slightly higher pressure – 19 bar, up from 15.

What is the De’Longhi PrimaDonna Elite?

The De’Longhi PrimaDonna Elite is the smartest coffee machine we’ve ever reviewed. As well as offering bean-to-cup coffee delivery and auto-preparation of milky drinks, this machine will hook up to your phone to let you design your own drinks and order them remotely.

If this sounds like a Back to the Future II prop, it only is in part. In use it’s a lot like other high-end bean-to-cup machines.

However, no other model in this class that we’ve reviewed gives you such fine-tuning control over exactly what goes into your drinks. At £1,499 you can spend a lot less and get similar results, but given how clumsy some ‘techy’ coffee makers can feel, De’Longhi has done remarkably well here. 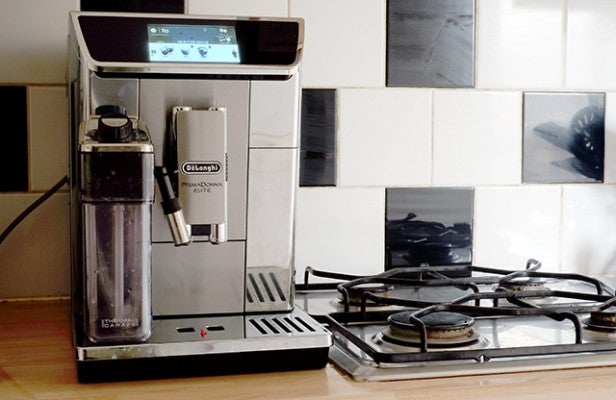 The De’Longhi PrimaDonna Elite is a great silver tower of coffee-making machine. It’s not subtle. It’s not small. And it’s probably deeper than just about any other appliance in your kitchen.

It’s not the stature that draws your eye first, though, not if you’re into your coffee machines. The De’Longhi PrimaDonna Elite has the largest display we’ve seen in a coffee maker to date. It’s huge, giving the impression this is as much a ‘coffee computer’ as a regular coffee machine.

If you’re out to show off, it’s a techie rival for the similarly-priced Sage by Heston Blumenthal The Oracle. 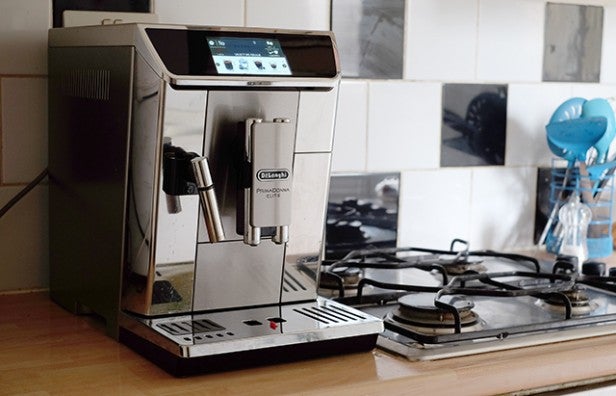 Get over the monolithic stature and all the gleaming chrome that makes up its front plates and you realise that mechanically it’s fairly similar to its more conventional-looking bean-to-cup alternatives. You still need to use plug-in reservoirs for milky drinks, coffee beans are loaded from the top and a fairly large jug reservoir slides out of the right side of the De’Longhi PrimaDonna Elite’s front.

This is a familiar bean-to-cup machine with an extra-techy veneer plastered on top. And there’s nothing wrong with that. 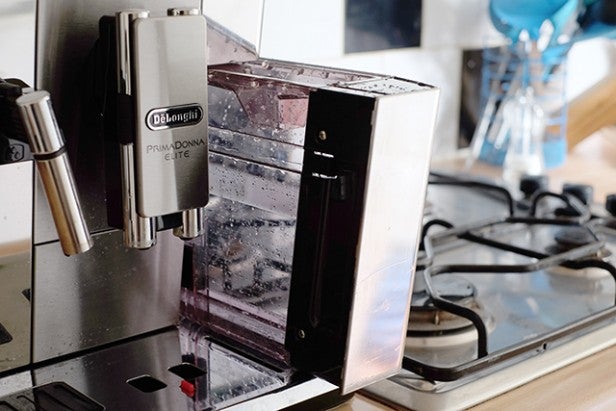 What is the De’Longhi PrimaDonna Elite like to use?

The De’Longhi PrimaDonna Elite does not use any old fashioned physical buttons beyond the power button that sits on the top. All other elements of operation are controlled either using the big colour touchscreen on the front or the companion mobile phone app.

You can even turn the Elite on using the phone app, telling you the mobile side of things hasn’t just been bunged-in as a design afterthought.

Despite trading-away the one-button drinks many other bean-to-cup machines are so proud of, the interface is fairly easy to get on with. Switch the De’Longhi PrimaDonna Elite on and you’ll see a scrolling list of drinks, including classics like cappuccinos, long coffees and lattes and any you’ve programmed-in yourself. You just swipe across the display to browse through them. 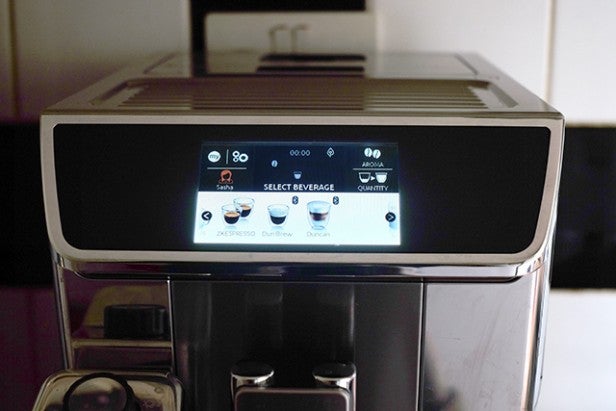 A one-button cappuccino becomes a ‘swipe and tap’ cappuccino. The touch interface doesn’t have the immediate slickness of an iPad, and the display looks recessed way behind the surface, but applying the standards we might use for a tablet to a coffee machine feels a little, well, unfair.

I did find that using the machine’s UI is generally more reliable than the phone, though. The app is great for programming-in new recipes, but it’s buggy, on occasion getting caught in a ‘loading’ loop when it, seemingly, can’t figure out what the machine itself is doing.

Buying the De’Longhi PrimaDonna Elite solely because of its smartphone integration would be silly.  After all, you still need to place a cup under the spout and, if you’re after a milky drink, take the milk module out of the fridge and plug it in. You can’t order a latte from under the duvet without ending up the milk coming out like porridge. 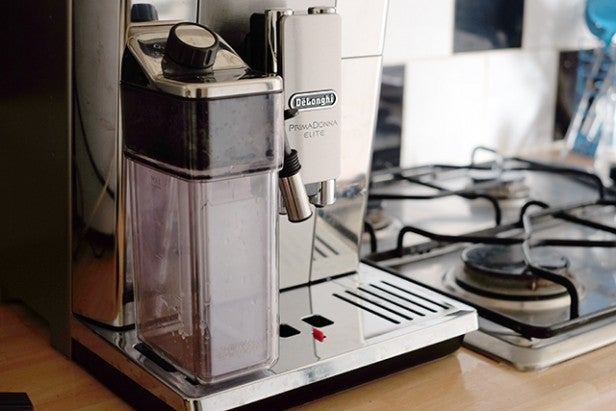 Visions of waking up and ordering a latte from under the duvet are a little optimistic. Of course, to get that you’d need to completely rethink the design of the coffee machine in general.

Still, for the most part this is a very convenient machine. The reservoir is front-loaded, and the used grounds bin is part of the bottom of the De’Longhi PrimaDonna Elite. You just pull out the part your cup/mug rests on to empty the bin and drip tray. You’ll be prompted whenever these need emptying, and when the reservoir needs filling too.

These are common touches in more expensive machines, but it is good to see them regardless. The De’Longhi PrimaDonna Elite also has a cup warmer up top, a custom-height spout and an LED that lights-up the cup area. 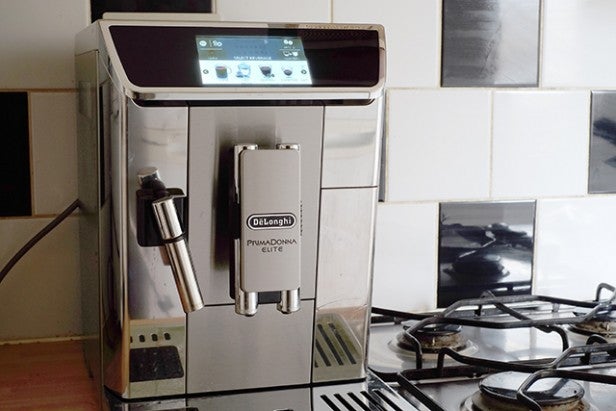 The De’Longhi PrimaDonna Elite milk system is very familiar too. It uses a LatteCrema milk jug that plugs into the front of the machine, with a manual dial that scales the frothiness of its milk up and down. You’ll be prompted to do this by the software but, again, it’s another part not fully automated.

There are plenty of conventional elements to the De’Longhi PrimaDonna Elite. What sets it apart is the level of customisation it allows. You can setup different profiles and, as mentioned earlier, create your own drinks from scratch. The level of fine-tuning here puts other machines to shame.

You can choose the exact millilitre dose of coffee, the strength (5 gradations), the temperature (4 gradations) and the number of seconds the Latte Crema system outputs milk for. The De’Longhi PrimaDonna Elite lets you play coffee scientist without getting your hands dirty. 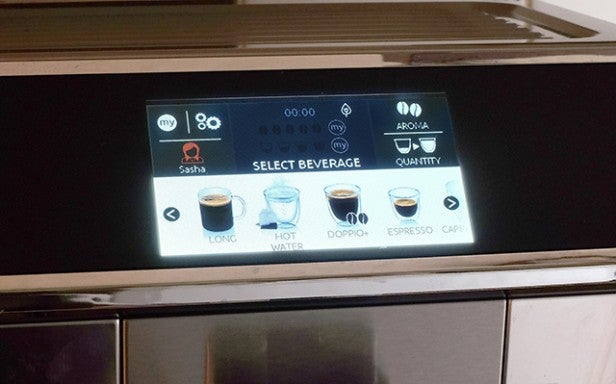 There’s even a second milk jug just for hot chocolate. This bypasses much of the main machine, instead making you just put the ingredients in the jug, then wait as a little propellor at the bottom mixes it around while a spout passes steam through the liquid to heat the chocolate up.

While a preset-heavy machine, the De’Longhi PrimaDonna Elite also lets you select hot water, steam and hot milk separately. It’ll go as ‘manual’ and as ‘auto’ as any bean-to-cup machine out there.

Some of this may come across as a bit of a gimmick, but the De’Longhi PrimaDonna Elite has real coffee machine cred too. It has a dual-boiler system, one for the main coffee output and a separate one for the steam/milk side. This lets it operate much more quickly. It pre-brews the grounds too.

The De’Longhi PrimaDonna Elite’s coffee comes in a thousand different potential varieties. But what really matters is whether it can supply the basics: rich espresso with a strong crema and good milk froth.

Both are very strong. I’ve used a few different bean blends during testing, and with all types the De’Longhi PrimaDonna Elite has produced a dark, enduring cream on every espresso hit. If you’re a coffee enthusiast with £1,500 to spend on a machine, I’d still recommend the Sage By Heston Blumenthal The Oracle over this as while its customisation is far more restrained, I found I got more consistent, richer results from that machine.

Despite its masses of customisation, this is still a machine for those looking for hands-off convenience. 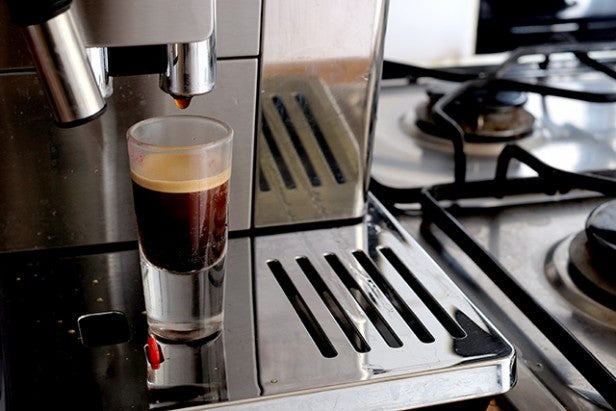 I have no complaints about the milk system beyond that, given it is only semi-automated, I’d rather steam my milk manually. The De’Longhi PrimaDonna Elite creates lasting milk froth at varying volumes as promised, and has never scalded the milk.

I did manage to get it to produce slightly burnt-tasting coffee when fiddling about with custom settings, suggesting you can get the machine to over-heat or over-extract grounds with certain settings. 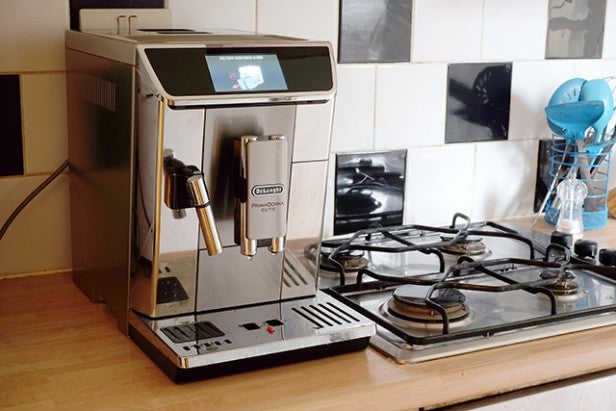 Should I buy the De’Longhi PrimaDonna Elite?

The De’Longhi PrimaDonna Elite is a good coffee machine for those in families, or houses full of people, with very particular tastes. The level of customisation it gives over your drinks is hard to beat.

Smartphone integration is neat too, although it’s an only partly successful window into the ‘Internet of things’ coffee machines we’ll encounter in the next couple of years. The whole smart interface its a whole lot less painful than it could have been too. It works, and doesn’t get rid off too much of the immediacy you get from a ‘one button drinks’ machine.

Does it justify the expense? Not really. The smart UI is neat, but it ultimately comes across as a veneer on top of a fairly conventional, but high-end, bean-to-cup machine. So unless that granular drinks customisation really appeals, you might want to consider saving some money on something a little less flashy.