What is the De’Longhi Autentica Plus?

The De’Longhi Autentica Plus is a bean-to-cup coffee machine, one that chips away just about all the messy and annoying parts of having a coffee machine. It’s even lower-maintenance than a cafetiere, and the design has clearly been thought-out to cater for those who don’t have gigantic, sprawling kitchens.

At £649 you can get slightly better coffee by going for a ‘pure’ espresso machine rather than a bean-to-cup one like the De’Longhi Autentica Plus. However, having lived with it for a few weeks there are no other major reasons not to go for one if you’re after a slimline model. 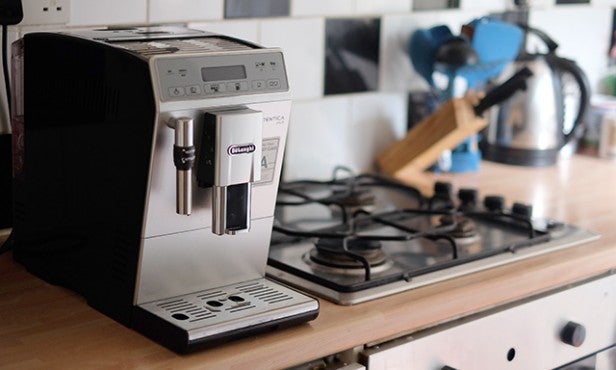 De’Longhi Autentica Plus: Design and Features

The De’Longhi Autentica Plus is a mid-range bean-to-cup machine. It offers plenty of features and lots of customisation without getting all of the high-end innards we saw recently in machines like the Sage by Heston Oracle: things like a dual-boiler system.

There are reasons why hardline coffee snobs might consider this a somewhat ‘basic’ model. However, as a lifestyle machine that gets you coffee shop-grade drinks with none of the fiddle and little of the clean-up, it’s perfect.

Perhaps the most notable element of the De’Longhi Autentica Plus is its shape. This is a slimline machine, one that doesn’t command too much space on your work surface. It’s something we’re very grateful of in the somewhat-dinky kitchen we use to test these machines.

How much it manages to fit into a relatively small frame is impressive. With a smaller footprint than some basic espresso models it crams-in a grinder and a bean feed that’ll take a whole standard-size pack of beans. As it’s a rubber-sealed compartment, there are no short-term freshness worries either. 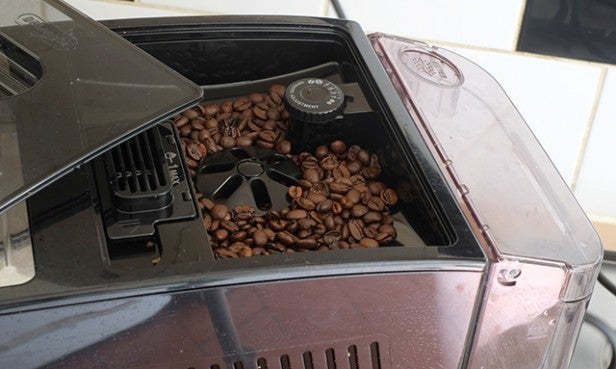 There’s no sense of wasted space here, although we are a little disappointed to see the De’Longhi Autentica Plus use a back-loaded reservoir system. There’s nothing explicitly wrong with this design, but it’s a shame in a machine that’s otherwise so suited to working in cramped conditions.

Most kitchens will suit the design well enough, but if you’re dealing with an appliance-stacked surface plus overhanging cupboards, having to lift the reservoir off can be awkward. While the top bit lifts up to both act as a handle and let you refill in-situ, the opening is that bit too narrow for the latter (without risking spilling water everywhere, anyway). 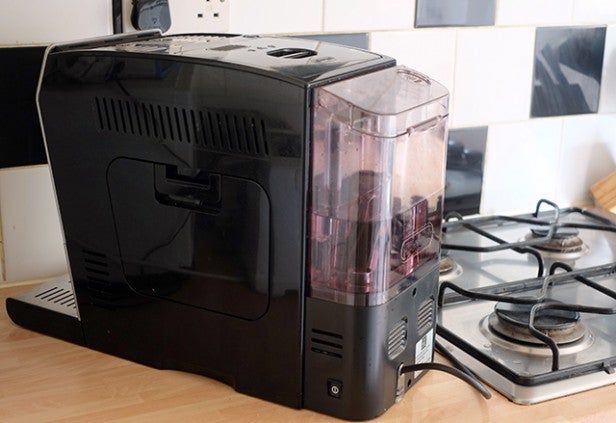 A fully-loaded bean-to-cup machine that tries its best to be compact is always going to have some compromises: this is one of the main ones, and there aren’t many others.

In the De’Longhi Autentica range, the Plus is a mid-level model. For an extra £150 you can upgrade to the Autentica Cappuccino machine, which has a plug-in milk module that can be bunged in the fridge when not in use, and removes all chance of you scalding you milk. That is the real coffee-for-dummies option, though, and there are cheaper machines out there for that. 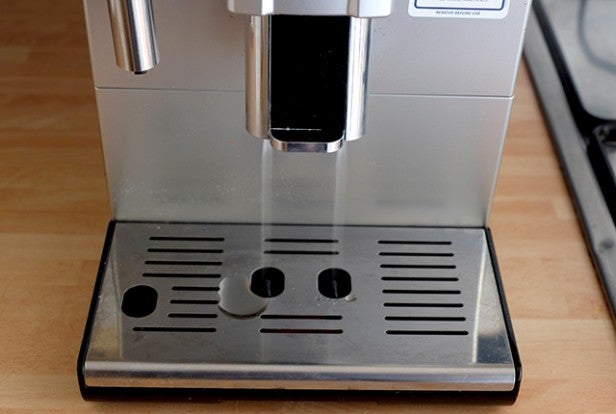 What is the De’Longhi Autentica Plus like to use?

The De’Longhi Autentica Plus doesn’t try to fool you into thinking you’re playing barista by using this machine. It’s mostly about pressing a button and getting a drink.

That’s fine, and lulling into its lazy rhythm over the past few weeks has been very easy. Switch the machine on and after a couple of seconds it’ll run through its auto-rinse function and begin heating up water, so there’s as little delay as possible when you actually get around to picking your drink.

The De’Longhi Autentica Plus doesn’t offer a thousand presets, instead offering essentially an espresso and ‘long’ coffee, which can then be tweaked in terms of strength and size. And temperature if you dive into the machine’s system properly. This is only necessary if you’re going to add cold milk to your coffee, though. There’s also a custom My Coffee preset. 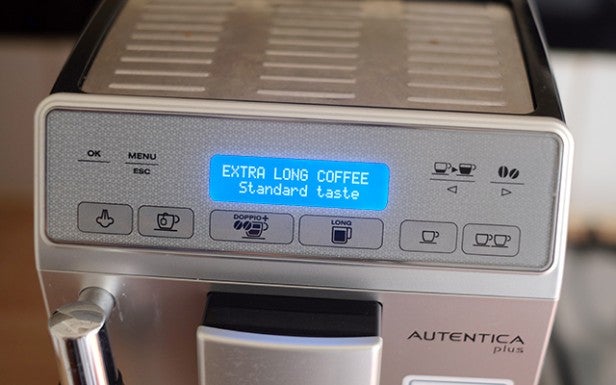 If you’re going to be making cappuccinos and flat whites rather than dunking cold semi skimmed into your espresso, you have to get ever-so-slightly hands-on. A button on the De’Longhi Autentica Plus’s front turns the steam output on, and you manually operate this to heat your milk, and create any froth. There’s a risk of scalding your milk if you’re a novice (or if you’re not), but as with learning how to tie a bowtie or the perfect way to apply mascara: YouTube is there to help out.

Like most machines, particularly non-dual-boiler ones, there’s a bit of watery sputter before the steam starts coming out, but otherwise the output is consistent and able to heat up a drink’s worth of milk in under a minute. As noted earlier, if you want an end-to-end full manual machine, check out the Autentica Cappuccino. 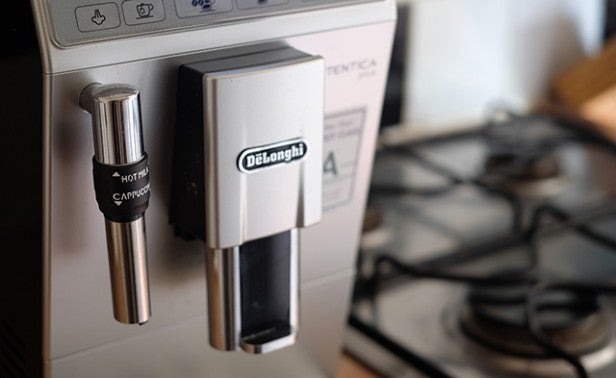 This style of machine offers fantastic versatility, at a level you might not expect from a largely accessible bean-to-cup model. For example, there’s a hot water button whose icon is even – gasp – a cup of tea. It’s also useful for turning espressos into Americanos. The standalone steam spout is perfect for preparing hot chocolate too.

The coffee spout can be raised and lowered to accommodate everything from a tiny little espresso cup to a huge mug, once again proving that the De’Longhi Autentica Plus fits an awful lot into a reasonably small frame. It also features a control that lets you set how fine the machine grinds coffee in the beans holding compartment. 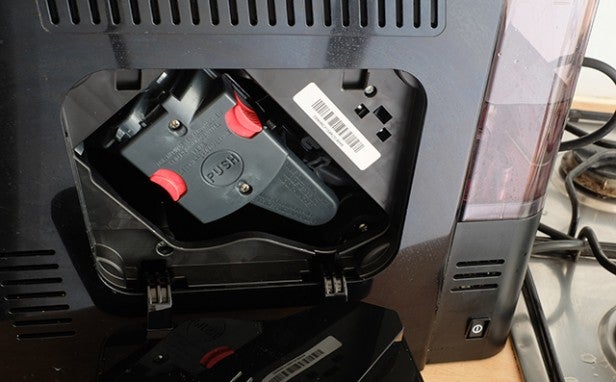 Despite being designed for relative ease of use, the De’Longhi Autentica Plus feels much less constrained than some bean-to-cup machines. It can even take pre-ground coffee, although it’s not designed to be used every day: accessing this option just isn’t as quick.

It maintenance is as automatic as you could hope for too. As well as rinsing on power-up, it prompts you to empty the waste bin. Unlike the reservoir, this is very conveniently located, being part of the drip tray, which you can simply pull out of the machine. As usual, used coffee grounds are excreted as pucks, not the sort of sludge you have to clean out when using a cafetiere. The machine also auto powers off, and rinses itself on doing so once more. This happens as per a timer you set in the menu (we just left it to the default setting, which switches it off after around 20 min). 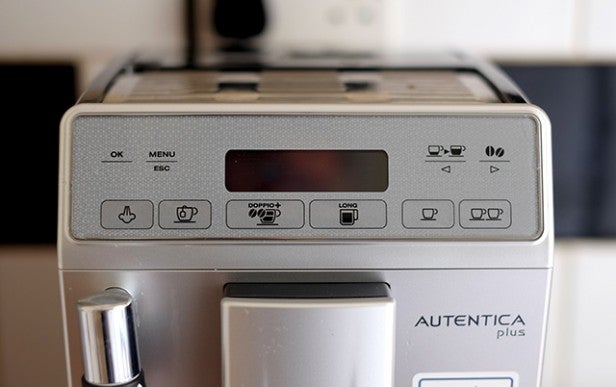 Doppio is a double espresso shot

The quality of the De’Longhi Autentica Plus’s milky drinks largely depends on whether you have the technique down or not. What it takes responsibility for is plain coffee – and that’s it.

The regular measures are perhaps a tiny bit weak, but with ‘strong’ and ‘extra strong’ modes to hand, it’s an issue you can tweak away. The De’Longhi Autentica Plus produces a nice dark crema, although it is a little bit thinner than we’d like. This was doubly obvious having switched from using the £1600 Sage By Heston Oracle, which also pulls a bit more nutty character out of beans than the Authentic Plus.

However, most importantly it absolutely performs alongside machines in this class in terms of coffee quality. Once you get your technique down, you’ll be able to make milky drinks roughly comparable with those sold at Starbucks and co. 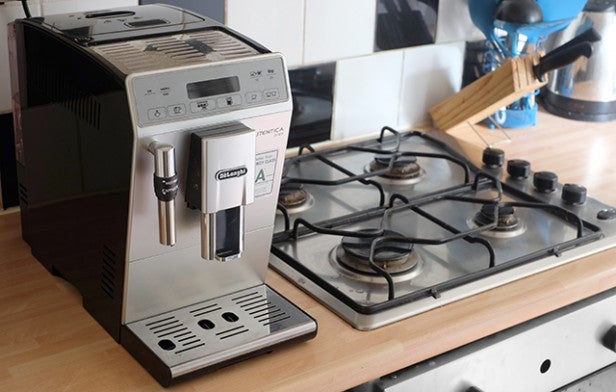 Should I buy the De’Longhi Autentica Plus?

The De’Longhi Autentica Plus is a bean-to-cup machine that’s easy to use while still giving you the flexibility to deal with all kinds of drinks. Where some restrict you to certain kinds of coffee, here you can make cappuccinos and espressos as well as tea, hot chocolate. Even bovril.

It’s not for people who want one-button-press cappuccino, but then De’longhi already makes a machine for that purpose.

If you have fairly limited space to work with, the De’Longhi Autentica Plus is a bit of a star. However, if you have plenty of the stuff, there are some cheaper models in the Philips Saeco range to consider.

A great bean-to-cup machine, particularly for those working with limited space.