A lot of dungeon crawlers can play out as power trips. While your hero (or party of heroes) won’t necessarily boast godlike invulnerability, it’s taken as standard that you will be able to cut through vast swathes of beasties with impunity – as long as you haven’t selected the hardest difficulty. See: Diablo 3. See also: Pillars Of Eternity.

Darkest Dungeon doesn’t offer this power trip. In fact, there’s something gleefully old school about Red Hook Studio’s nightmarish trip underground. Here is a game that demands you invest in a troop of characters, manage everything from their equipment to their stress levels and bear in mind that all of them could meet an untimely demise if they turn the wrong corner and run into the wrong monster. It’s a little refreshing, for a change, to be controlling a posse of ‘heroes’ that appear woefully out of their depth from the get-go. 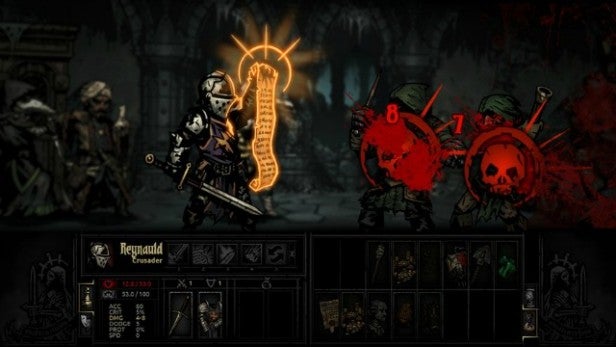 The opening of Darkest Dungeon plunges players into a waking nightmare. Between the lush, foreboding score, the dark, craggy visual style and the admittedly brilliant voice acting, Darkest Dungeon creates a palpable atmosphere that’s equal parts hopelessness and menace. It’s been a while since a series of cartoon stills has so effectively managed to chill the blood and raise goosebumps.

The plot, such as it is, involves the sending a group of adventurers into a dungeon beneath an old mansion – the previous occupant of which unleashed hell underground in their quest to satiate carnal desires. At its core, the game is a turn-based RPG in which players explore the depths of a dungeon in search of treasure that’s guarded by a collection of rather nasty monsters.

The adventurers are all class-based, with different abilities and attacks, and you are encouraged to experiment with different combinations – stacking characters in the most effective order increases your chances of bringing them back from the dungeon in one piece. 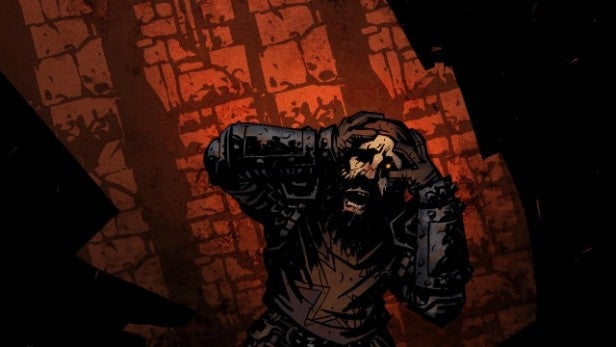 The formation and choice of character presents its own problems. Players need to make sure they have the right combination to fit each dungeon. You can find your party being cut down because they don’t have a healer in their ranks or there’s no one in their number who has ranged damage. Oh and if you run out of torches on your travels, any monster you run into gets an automatic attack bonus.

The biggest feature that differentiates Darkest Dungeon from other games in this genre is Stress. As the adventurers journey further beneath the mansion, the horrors they face begin to take a toll on their sanity. Each party member’s Stress level is measured in gauge, which fill as the team runs into more and more nightmarish creatures in darkened corridors. Once it fills, the character snaps and then things can deteriorate at a pretty frightening pace. 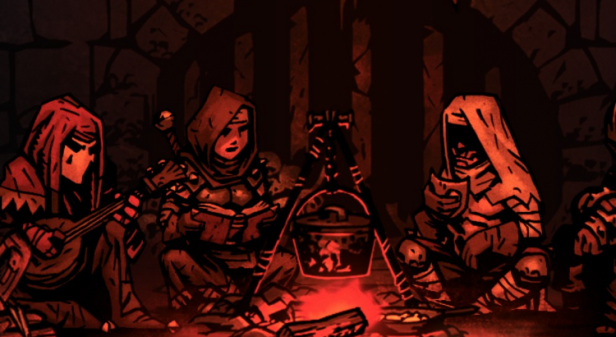 Those who have sunken deep into trauma will start to drag their comrades into the abyss with them. Characters can start mumbling incoherently, pray out loud for death, start hurling abuse at each other and even become masochistic by harming themselves or refusing critical healing spells. Naturally, this will start to affect the rest of their party, who will charge much quicker towards breaking point. The adventurers are held together by a slender thread; it’s like trying to manage a house of cards – pull one out and the whole structure will come tumbling down.

So Darkest Dungeon demands that you pay attention to your party’s Stress levels, which involves an awful lot of micromanagement. You can reduce Stress in their characters by heading into the nearby hamlet, hitting the local bar, going to church or visiting the brothel. These activities, however, cost your party members gold, which – as you’ve probably guessed – they can only earn by heading back down into the dungeon to face whatever terrors it has in store for them. 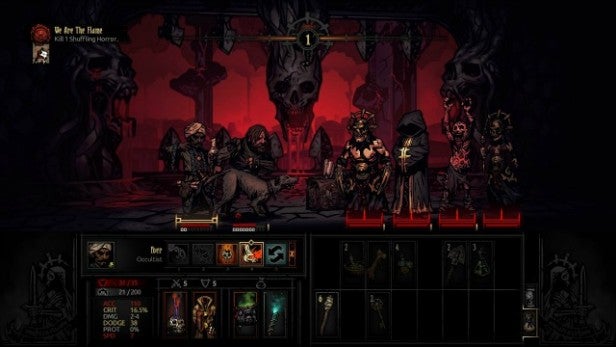 Alongside dealing with the Lovecraftian levels of Stress in the dungeon, you’ll need to be aware of the fact that Darkest Dungeon features perma-death. If one of your party – or the entire party – meets their doom, there are no do-overs. This means that you can invest a heck of a lot of time into beefing up their characters only to see them reduced to dust – them and all of their skills and equipment.

Seeing as how characters and team can be wiped out in one encounter a particularly strong boss, you face the prospect of having to start over from scratch. To be fair the action in the game isn’t repetitive and there’s a lot here to enjoy so losing your team to the forces of darkness isn’t the grind that it could be.

That having been said, watching a monster turn heroes you’ve invested so much time into levelling up into paint is always a kick in the gut.

Verdict
If you’re prepared to take that possibility on board, Darkest Dungeon offers a challenging chasm to lose yourself in. It won’t appeal to every type of player, but for those willing to face the prospect of crippling loss, insanity and nail-biting tension, Darkest Dungeon is certainly worth the time you’ll sink into it.