The Ringed City isn’t just another piece of DLC. It’s almost certainly the last piece of Dark Souls 3 content From Software will ever produce, and an extensive, enthralling adventure in its own right – one that represents all that’s best and worst about the Souls series.

When I say “worst”, I don’t want to suggest that this is in any way a disappointing piece of DLC, just that it won’t do anything to convince non-Souls fans to finally pick up that controller and, in the words of Bandai Namco’s marketing team, “prepare to die”.

This is more of the same challenging, user-unfriendly action RPG stuff we’ve seen in previous Souls games – and unlike the somewhat curtailed previous piece of Darks Souls 3 DLC, Ashes of Ariandel, there’s plenty of it.

Size isn’t an indicator of a game’s quality, but I’d estimate that The Ringed City is about twice as big as Ashes of Ariandel: there are four boss fights compared to Ariandel’s two, and the DLC’s world is physically larger. There’s a lot more meat on The Ringed City’s bones – more places to explore, more monsters to fight, more gear to discover and more to think about, plot-wise – and that’ll come as welcome news to anyone who found themselves polishing off Ariandel’s challenges in five hours or so.

I also found it a lot harder than Ashes of Ariandel, being designed for veterans who have already reached the late game of the main Dark Souls 3 campaign. In fact, the DLC can only be accessed from two places: a bonfire right before the main game’s final boss encounter; and a bonfire that appears after killing the final boss of Ashes of Ariandel. You’ll need a character that’s battled through at least that far to even get started. 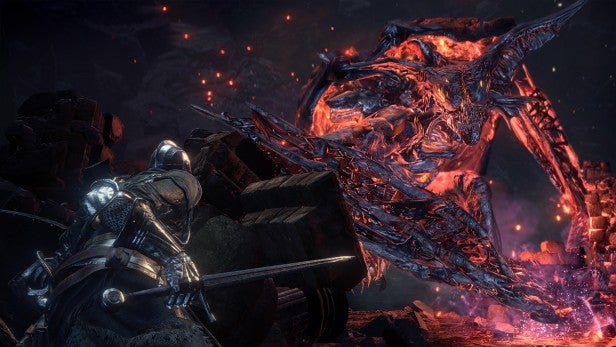 The only appropriately levelled character I had in my Dark Souls 3 save files was, unfortunately for me, a spell caster build – a metaphorical “glass cannon” that could deal high ranged damage but generally died in a couple of hits if the enemies got close. Not the best for venturing into unknown, deadly late game DLC territory, I soon discovered.

Time after time, I was presented with the old familiar “YOU DIED” message and not just during the DLC’s boss battles, although these are tough as nails – one in particular, albeit an optional encounter, might just be the hardest Souls boss I’ve ever fought. There are two long sequences in the game where a combination of environmental hazards and sheer weight of mob enemy numbers caused me to turn the air of my living room a dark, dark shade of blue, many many times.

I can only apologise to my neighbours for whatever they may have heard me holler, but here’s the thing about The Ringed City: like the best bits of previous Souls games and its spiritual brother Bloodborne, these frustrating deaths are actually lessons. The game is teaching you how to play it well by killing you, and the feelings of achievement and sheer joy when you do get through those sections, or when you fell a boss that’s murked you ten times in a row… well, it’s a rare one in modern video games that is to be treasured. 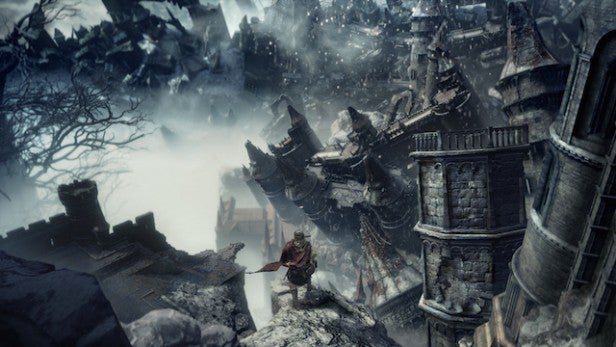 Feeling stuck? You can, of course, summon in other players and AI-controlled NPCs to help you out at key points, and other players can invade your world to make things even tougher. Aside from one new covenant and some new arenas, though – and one clever boss-related player-versus-player mechanic that’s making its Dark Souls 3 debut with this DLC – The Ringed City doesn’t drastically change the multiplayer part of the base game.

If you pick up your controller to relax, you may not value From Software’s approach quite so much, or the obtuse way the RPG tells its story. When the likes of Mass Effect: Andromeda or The Witcher III: Wild Hunt don’t leave much to interpretation plot-wise, Dark Souls has always revelled in its vagueness. You’ll have to read the descriptions of items, examine the environment carefully or pore over seemingly trivial lines of dialogue if you want to form any sort of cogent theory on what’s going on in The Ringed City. And even if you do, nobody at From is ever going to come out and tell you you were right. I like it that way, but appreciate it’s an acquired taste.

For fear of spoilers, I won’t go into details of characters’ motivations or the story, but suffice it to say that The Ringed City delivers a suitably Souls-esque conclusion to the series. There’s no tying everything up in a neat, satisfying bow, for every answer given you can expect another, new question. 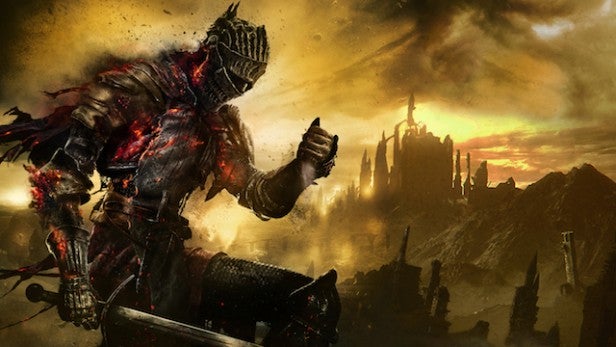 The Ringed City is a must for Dark Souls fanatics, and not just because it’s almost certainly the final chapter in what has become a cult classic series. It’s a great piece of DLC in its own right, with thrilling boss fights, gorgeous locations and an appropriately sad, mournful ending.

If you count yourself among the hordes of gamers who adore these games for what they are, then you’ll find this last jaunt through a perilous, dying world where everything wants to kill you over and over again a joy.