Available on PS4 (version tested), Xbox One, PC
Over the past seven years, since the release of From Software’s Demon’s Souls on PlayStation 3, an unspoken language has formed. Play any Souls game and you’ll see it in the quiet interactions between summoned players: a fist-pump to celebrate the defeat of a boss; a gesture towards an illusory wall; a wave to a distant, anonymous friend.

In player-vs-player combat, this language runs deeper still. Here it’s considered good etiquette to bow to your opponent before striking a blow, and some players are even known to chug down all their health-giving Estus potions, proving their flask is empty before ever swinging their steel.

As a result of these unwritten rules, combat in the Dark Souls series feels honourable. And this is why it’s a shame the series has always made arranging these contests a difficult, arcane process. You know, like trying to understand the lore. 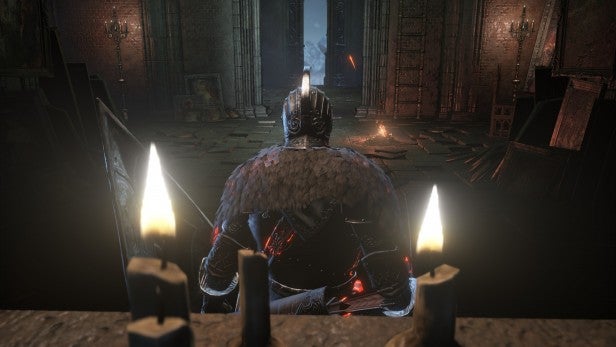 Fortunately, Dark Souls 3’s first DLC, Ashes of Ariendel, rectifies this: it finally delivers a dedicated PvP combat arena that you can jump into from a menu filled with configurations; you can even fight your friends. This focus on end-game duels means that how much you get out of Ashes of Ariendel will largely depend on how much you enjoy cutting down other players.

It isn’t all about the arena, of course. First, you have to earn arena privileges by trudging through its new, snowy landscape: the Painted World of Ariendel. Accessed via an NPC near the Cathedral of the Deep’s Cleansing Chapel bonfire, the Painted World feels like Bloodborne’s Cainhurst in the midst of a blizzard.

Visibility is poor, and the blanket of snowdrift obscures all of the pointy sticks, claws and teeth waiting to lunge at you in any moment. As ever, it’s an oppressive landscape, made even more uninviting by all its twisted trees topped with long, black, creepy, Japanese demon-child hair.

The Painted World isn’t exactly huge, and it’s made to feel even smaller by an overly generous scattering of bonfires. You might initially bash your head off the new enemies as you try to navigate through the blanket of white, but once you hit your stride you’ll likely churn through Ariendel.

On your travels you’ll fight your way through a diseased village littered with ravaged creatures and horrible jump scares; you’ll cut through an insect nest in a blighted tower; and you’ll descend a mess of gnarled, giant branches, eventually setting down and exploring a frozen lake. The enemies and surprises that lurk in these environments is best left discovered by yourself. 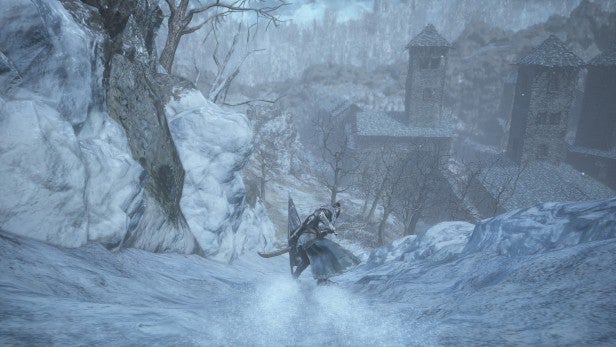 Whatever build your character, though, you’ll find something useful on your travels. Be it armour, a weapon or even a new spell – you’re always stumbling across a powerful pyromancy or a stylish new helmet. Serious Dark Souls 3 players will likely find the trip to Ariendel worth it for these trinkets alone, but luckily the DLC also contains a brilliant, three-stage boss fight that shouldn’t be missed.

Unfortunately, it’s let down by the fact this is the only proper boss fight in Ariendel, with an optional later one reusing some of the expansion’s regular enemies, making it feel far less impactful. It also feels like a repeat of the main boss, too, with a similar mix of enemy types. It’s a bit of an anti-climax – especially when both boss battles are followed by a dead-end and no fanfare.

The real point of this DLC – as I attested to in this review’s opening – is the PvP arena, and it’s unlocked after the optional boss is defeated and is accessed via the Firelink bonfire. Dark Souls’ PvP has always been fun, and here you can test your mettle against other players in 1v1 battles, hectic free-for-alls, and even team contests. 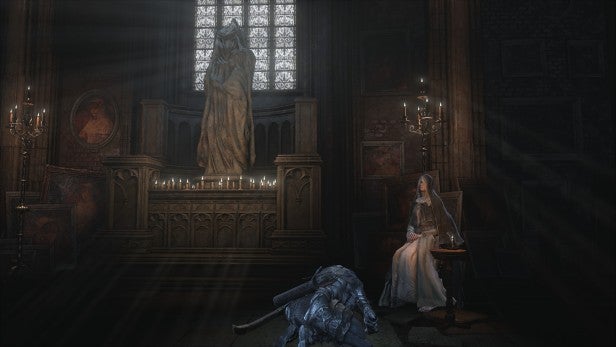 These skirmishes don’t quite match the intensity of a close-fought invasion – there’s nothing on the line here, other than your dignity – but it’s a great way to pass a few hours, or even test out some of the more niche weapons you’ve collected over the course of your adventure.

Plus, the 3v3 arena battles are a spectacle that you just can’t get elsewhere; a glorious mess of backstabs and cheap shots, which totally goes against the civilised etiquette of a 1v1 duel. All that unspoken language goes out of the window in these back-alley scuffles.

The Painted World of Ariendel has a bleak beauty that’s begging to be explored, but it’s all over far too quickly. Drilled down to its basic components, this DLC is one great boss fight, some decent items and a PvP arena. Unfortunately, if you don’t care about battling other players online then you’re unlikely to get much out of this.

Ultimately, Ashes of Ariendel feels like an appetiser for the second Dark Souls 3 DLC, an adventure From Software promises will tie into this first expansion. Let’s just hope the upcoming main course has a more meat on its bones.