“The fire fades…” the opening cutscene of Dark Souls 3 stays with you as you stab, slash, dodge, thrust and parry through its bleak and hostile land. As the Ashen One, Ember increases your life – signified by smouldering armour – with death extinguishing you. Instead of restoring humanity, Dark Souls 3 asks you to kindle an ever-dying flame. Ironically, the image of a fading fire encapsulates Dark Souls 3 as a game.

While the third entry in From Software’s dark fantasy RPG series retains the same brilliant core – deep, thoughtful combat, an oppressive but striking world and a rewarding sense of discovery – it’s dampened by familiarity; never reaching the heights of what has come before and feels like a sharp regression from PS4-exclusive Bloodborne. It’s a mishmash of the studio’s previous work, crammed with fan service and nods, leaving it somewhat diluted. Dark Souls 3 remains a triumph, but there’s no escaping how derivative it is.

Dark Souls 3 takes some of Bloodborne’s speed (albeit without the PS4 exclusive’s brilliantly nippy dash-dodge), the playstyle variety of Dark Souls, and lets you loose across a world that’s a combination of the former’s gothic streets and the latter’s medieval embankments. You’ll fight undead soldiers atop a castle while avoiding dragon’s breath in one section, and some hours later be rolling under the claws of a giant beast, its crimson blood spattering on moonlit cobbles with each swipe of your sword. 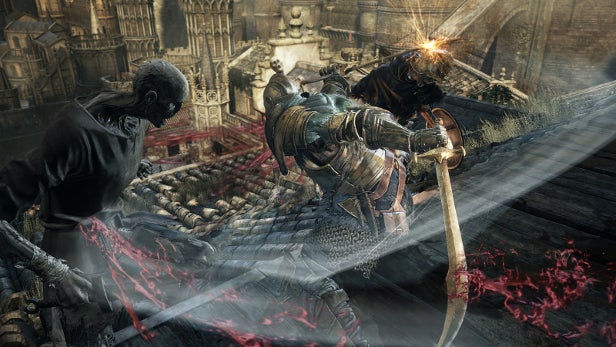 The setting, Lothric, is a gorgeous world packed with detail, but clearly wears its influences on its engraved gauntlets, even revisiting old Souls haunts. It’s essentially a greatest hits collection, taking the best of the studio’s back catalogue and wrapping it in a new, slightly chaotic package.

Instead of imitating the original Dark Souls’ labyrinthine connection of distinct areas leading back to a central hub, Lothric is a spider’s web, each new section its own standalone environmental puzzle. There’s a certain rhythm to this world, with generally two different routes – and two bosses – available at any time.

Gorgeous vistas welcome new zones, your destination a stark landmark in the distance. There’s a great sense of discovery, with seemingly innocuous routes often revealing themselves to be pathways to massive undiscovered locations. Purists might be disappointed that the layout of the world means warping between bonfires is an absolute necessity – particularly as you need to return to a hub disconnected from the rest of the world to upgrade your character and equipment, like in Demon’s Souls and Bloodborne – but it’s a concession made to accommodate the scale of this sprawling landscape. 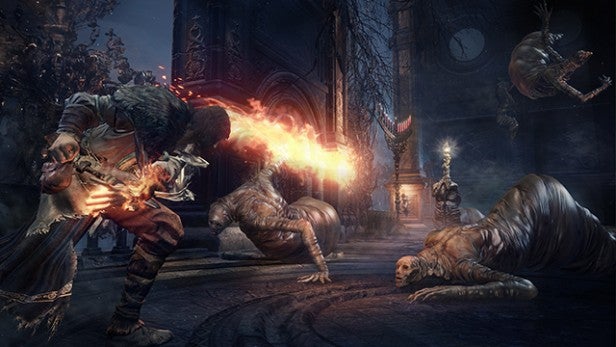 It’s a trade-off I don’t mind when the areas themselves, however disparate, are so exquisitely detailed and interesting to explore. Take one of the first zones: the High Wall of Lothric. You enter this area – in series tradition – by slowly pushing open a set of large double doors, light seeping in as the door cracks, gradually revealing the distant, gothic spires against an orange sky. Then there are your immediate surroundings: dominated by grotesque, twisted corpses impaled through wooden spikes, their hands contorted and their fingers pointing towards that same skyline. Despite the glorious sunshine, you can never escape the overwhelming darkness of the setting, and it’s uncomfortable.

It’s a game that doesn’t want you to feel at ease, but if you’re a series veteran, you will. Whether armour-clad, wielding a greatsword and tower-shield, or draped in cloth while holding a katana and buckler, Dark Souls 3 feels like home. The first twenty hours or so feel like strapping on a comfy pair of old greaves. It plays almost exactly as you remember the series, although aggressive playstyles are much more viable. There have been small attempts to add to the formula, but they feel mostly superfluous.

Take weapon arts, which let you do powerful, weapon-specific attacks: the katana, for example, makes use of its scabbard as you hold it sheathed by your side, swiping out in a fast arc; the battleaxe allows you to perform a warcry and increase your attack power; and greatswords let you swing your sword up, taking normal-sized enemies off their feet. Weapon arts can be useful for crowd control, but most of the time you’ll stick to your normal tactics. After all, weapon arts use FP – Dark Souls 3’s take on mana – as well as stamina, and FP can only be reliably topped up by replacing some of your health-replenishing Estus Flasks for a different flask, and health recuperation always takes precedence. 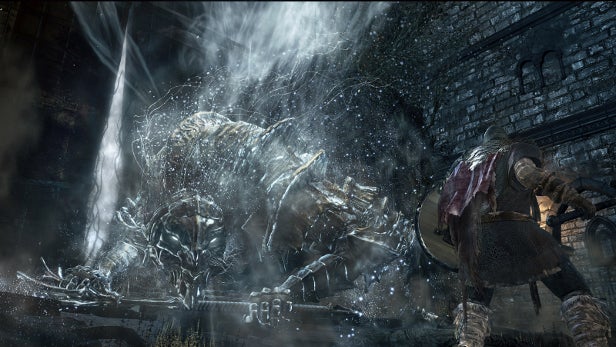 Bloodborne’s focus on speedy dodging and parrying attacks proves From Software knows how to innovate, but Dark Souls 3’s additions make it seem as if the Japanese studio is out of ideas for this series specifically. You can understand why series director Hidetaka Miyazaki wants to move away from Dark Souls after this one. Dark Souls 3 is still better than most games, but stands in the shadow of the original.

Dark Souls is a series that’s known to be hardcore and unforgiving. Its “prepare to die” marketing slogan aims for players who see completing tough games as a badge of honour. Many long-time fans like to say Dark Souls is difficult, but fair. In Dark Souls 3, I feel even the most militant series apologists will struggle to come up with excuses at times. Rather than increasing the difficulty by introducing interesting enemy types, Dark Souls 3 too often resorts to dirty tricks.

It’s immediately apparent in the treasure chests dotted around. By now, you will probably swipe these with your sword as an instinct, tapping at them with your weapon to see if they sprout limbs and attack you as a mimic. In Lothric, almost every chest will. Since mimics will kill you outright if they grab hold of you, fighting them gets old fast. It’s really overdone.

There’s also an enemy that can lower your max health temporarily just by looking at you, reducing it to the point where even a blocked hit will kill you. And when your health does recharge, you still need to drink Estus to top it back up again. The only way to stop this is to strike them down quickly before they get chance, but they’re often grouped together in numbers, meaning it’s near impossible to not take damage. In a series known for fairness, it just feels off. 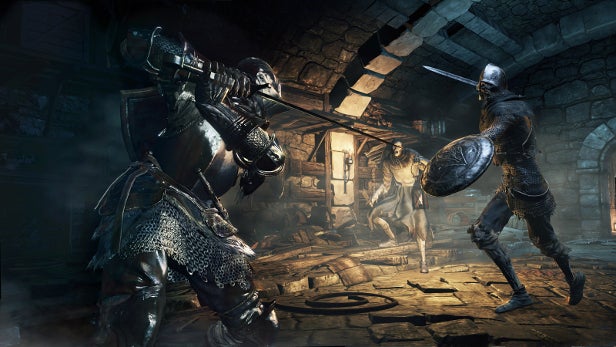 It’s the same for later boss battles, with homing one-shot kills, bosses who can duplicate themselves, bosses who can be revived, and so many with multiple forms. Rather than that Dark Souls feeling of triumph that comes from winning a tough duel, Dark Souls 3 often makes you feel like you got lucky, victory bringing only relief.

Dark Souls is a series about pushing through the unknown, pressing forward with your shield raised, probing the darkness, and looking for the flicker of the next bonfire. When the fire is lit, the previous area loses its mystique. It is conquered. This same sense of familiarity permeates Dark Souls 3, and it only ever gets you out of your comfort zone by resorting to cheap tricks. Yet despite this, it’s still a beautifully bleak adventure with one of the best combat systems in videogames – it just falls short of the magic of the original. Like the opening cutscene says: the fire fades.