This is a tale of boy meets game, featuring your humble reviewer and a striking but derivative third-person shooter. It’s a tale that goes through all the phases of many a relationship: the initial spark, infatuation, disappointment, bitterness and recrimination and finally a feeling of acceptance. I might not feel the same way about Dark Sector that I did when things begun, but that doesn’t mean we can’t be friends. 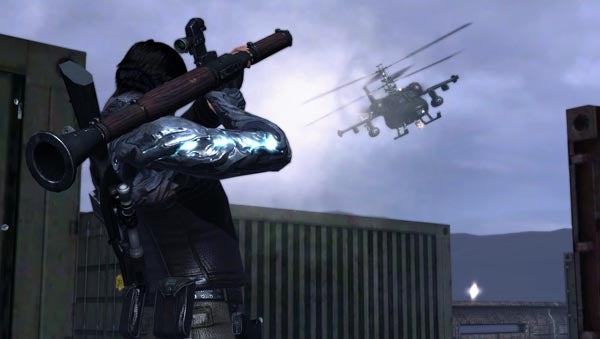 Let’s be clear – I always knew the game wasn’t much of an original. Some people put Dark Sector down as just a brazen clone of Gears of War, but it’s actually more than that; it’s happy to rip off Resident Evil 4 and Metal Gear Solid too. The look, the basic gunplay, the cover system and the sprint move (complete with shakey-cam) have been lifted wholesale from Epic’s gritty sci-fi classic. Characters, some enemies and aspects of the presentation are hugely reminiscent of the Solid Snake saga. Meanwhile, a black market-based weapons and upgrade system, not to mention a number of hostile mutant foes, have clearly been ‘inspired’ by Capcom’s awesome Resident Evil franchise reboot. If imitation is the sincerest form of flattery, Dark Sector is one of the all-time champs of brown-nose games. 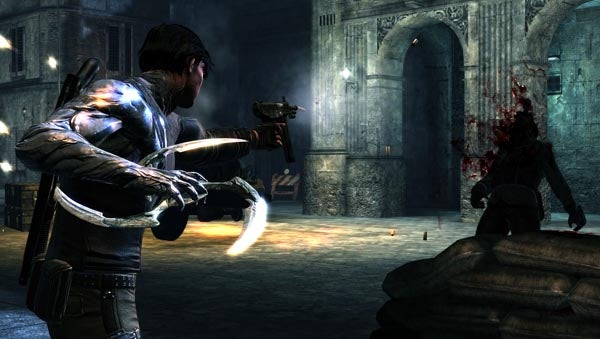 To be fair, it does add a few new ideas to the mix, the biggest being that your clichéd loose-cannon agent protagonist – possibly moonlighting from a My Chemical Romance tribute band, to judge by his clothes and choppy black fringe – is hit early on by the game’s mysterious infection. On the downside, this means a thick black chitinous skin that spreads from his arm over his body as the game progresses. On the upside, his strength and resistance to damage is increased and – when threatened – he spontaneously produces a handy triple-bladed discus weapon, known as the Glaive. Not the sort of man to let this kind of thing prevent him from completing his standard-issue game assassination mission, he opts instead to make use of his new tools, travelling through the game’s fictional, infected soviet republic and wrecking every trooper and hideous mutant that stands in his way. 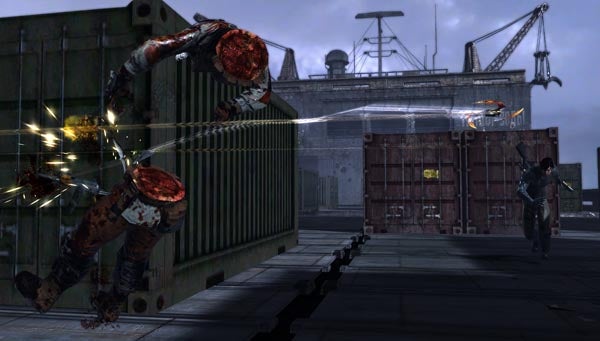 It might be a throwback to 80s fantasy movie, Krull, but the Glaive is indisputably the coolest thing about Dark Sector. At the start it works as a simple but hideously effective missile weapon, lopping off limbs or cracking skulls if thrown effectively, then returning to your waiting hand. Then, just when you’re getting used to that, you develop the ability to control the Glaive with aftertouch. Throw it, then click down on the same trigger and you can control it in slow motion from a zoomed-in, behind the Glaive view – much like the crossbow bolts in Heavenly Sword. This is hugely entertaining, particularly once you learn how to curve the Glaive over or around walls where the bad guys are wussily taking cover, or take a chunk off one running goon then bury the blades in the chap behind him. 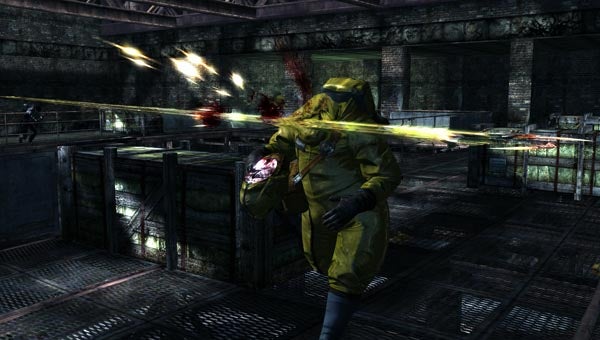 This would be enough to be getting on with, but the game also throws in new abilities as you progress. You can power up the Glaive using electricity or fire, then use these to increase the damage or (more commonly) solve simple door puzzles that lock your path. A later power-up then allows you to charge up one of these elemental powers then explode it for an area effects – ideal for tricky enemy groups when used in combination with the aftertouch power. After this, ice powers are added, while your hero develops the ability to throw up a force shield and deflect missiles back at his attackers. Despite all this complexity, the controls are surprisingly intuitive. 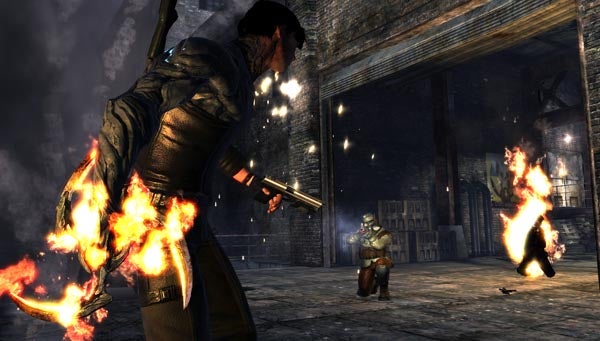 On top of the Glaive, you still have access to a handgun and any rifles you can scavenge from your foes, though the game initially encourages you to stick with the Glaive by putting a limiter on weapons that prevents anyone infected (i.e. you) from holding them for more than a few moments. This changes with time, as Dark Sector throws in black markets hidden beneath the city streets, where you can purchase new weapons then upgrade them in a distinctly Resident Evil 4 style. Dual-wielding the Glaive and a handgun opens up more possibilities. Annoyed by those gits who wander towards you with a heavy riot shield? Knock them off balance with the Glaive, then shoot them while they’re fumbling. How do you like them apples, eh guys? 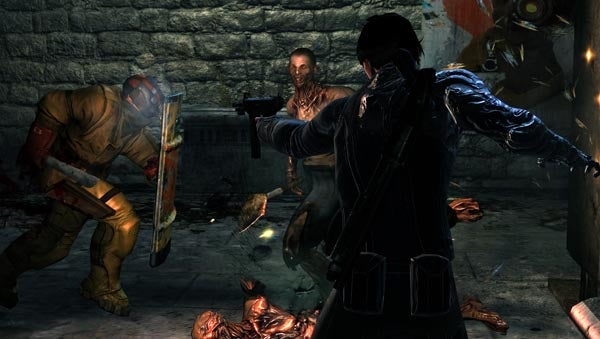 This all comes together in some fantastic shoot-outs early on in the game, along with some mutant encounters worthy of RE4 or Gears of War. What’s more, the game looks, sounds and feels great. The environments riff on the Gears style of ‘ruined beauty’ but it works every bit as well as it did in Dark Sector’s inspiration, and the game’s Evolution engine handles equally superb lighting, character models and rich, textural detail. It’s a shame that more of the environment isn’t destructible – windows that shatter should be a given in this day and age – but the world always feels solid and believable. Meanwhile the audio, ranging from the rattle of machine-gun fire to the swoosh and thud of the Glaive to the urgent radio messages sent out by your soviet foes, is excellent. On a technical level, there’s little to complain about at all. 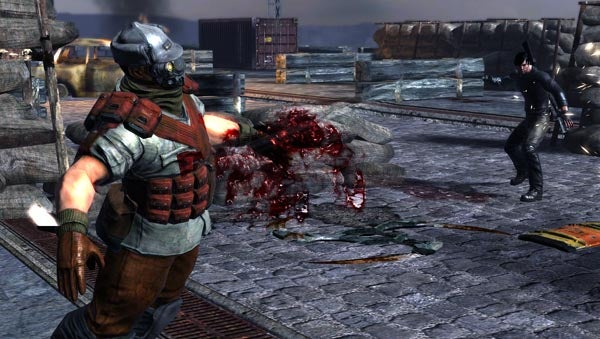 Yet as my time with Dark Sector went on, things began to turn sour. The game designers seem to have suffered from what I like to call Prince of Persia disease – the mistaken belief that if fighting five enemies is fun, then fighting 10 or 20 must be twice as much, especially if they come in wave after wave after wave. As a result, the snappy combat encounters that at first proved so thrilling, turn into long, tiring battles where you dread dying for the simple reason that you hate the thought of having to go through the whole bloody thing again. On top of this you get grinding close-quarters scraps against what seems like an endless stream of zombies, plus some annoying bits involving Resident Evil mutant dogs where you’ll be fighting more against the camera and controls than against the demonic mutts themselves. A flaming Glaive makes such things move a little faster, but these bits do get in the way of the fun. 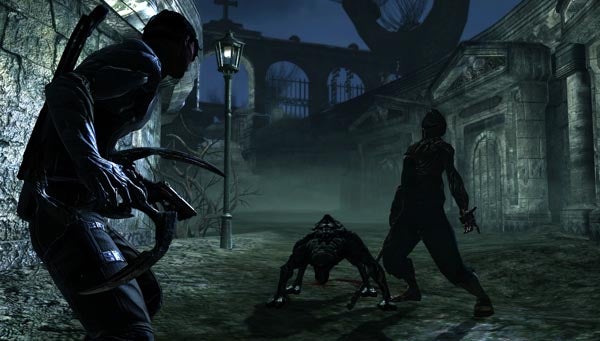 The same goes for the boss battles. They’re not impossible (like some of Capcom’s) merely time-consuming, overly intricate and not obvious enough in terms of what you’re actually meant to do. A fight against a huge mutant in a ruined church stretched my patience, and at first I thought a subsequent battle against a Metal Gear-style mech would tear it to pieces until I realised that, having jumped through several hoops, it wasn’t a boss battle at all and that I simply hadn’t worked out what I was meant to do while the bothersome bot was disabled. This was lucky, because I’d had to fight the temptation to give up there and then. FAQs will doubtless solve these issues in time, but you have to wonder whether anyone serious play-tested (not just bug-tested) the game. 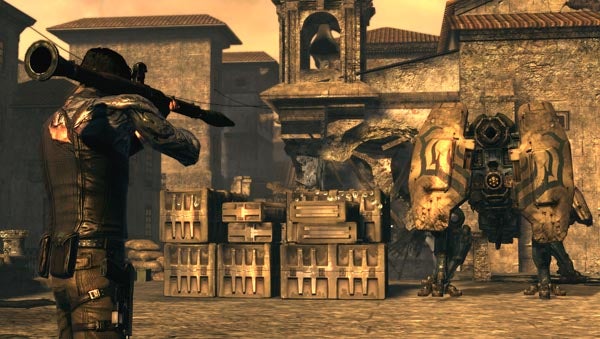 This is a shame, but I’ve tried not to get angry and lose perspective. For the most part Dark Sector’s core – the action – is perfectly solid and enjoyable. The more you find imaginative ways of using the Glaive, its abilities and the environment to your advantage, the better time you’ll have working through the soviet forces, and the more you’ll be able to ignore things like the disjointed, barely explained plot or the fact that the designers seem to have run out of ideas two thirds of the way through. It’s not the killer single-player campaign it could have been with a bit more work and fine tuning, but it’s a fine way to keep yourself occupied if you’ve finished last year’s big releases and you’re waiting for this year’s to turn up. It’s not that Dark Sector’s great, but at least it’s pretty good. 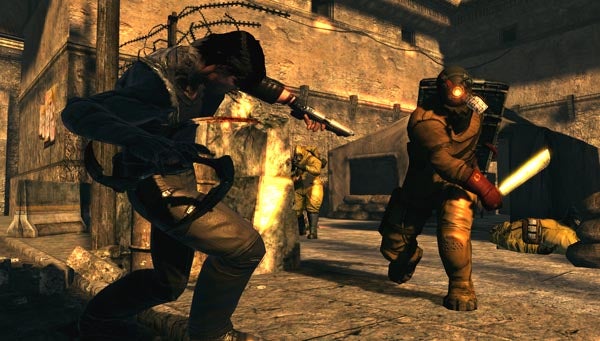 The online options also show signs of a little care and attention. I fully expected a dodgy deathmatch game featuring teams of infected super-spys, but instead we get two specially designed game types: Infection, pitting a team of grunts against one glaive-packing infected, and Epidemic, a team game where each side has one infected hero and the objective is to snuff the other side’s out. It’s unlikely that either mode is strong enough to survive for long in today’s competitive online battlefield, but Dark Sector’s fans – and there will be some – will get a little more of their money’s worth here. 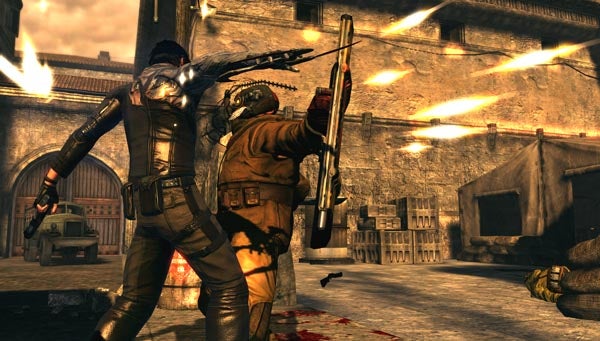 During the first few hours of play I had high hopes that Dark Sector was going to be this year’s The Darkness – a game that I hadn’t begun the year in eager anticipation of, but would end the year remembering fondly. Unfortunately it didn’t quite end up that way, but for all its rampant idea-grabbing and moments of ill-judged design, it’s still far from being a disaster. If you don’t get it then you won’t miss out on anything that special, but if you’re a fan of good action games, then you wouldn’t regret shelling out for it either. Just prepare for a few ups and downs, and enjoy the affair while it lasts.


While hardly original and packed with causes for irritation, Dark Sector is a decent action game with fine graphics and a handful of brilliant features. If you like the games it apes, it’s well worth picking up.