Overall, things are rosier for the PS3 and Sony fanboys than they have been in years. Sales are up, the machine finally has some decent games, and with the likes of MGS4, Mirrors Edge and Motorstorm: Pacific Rift on the way, the future is looking bright as well. However, there is one area where Sony still seems to lag behind. At a time when Microsoft seems to be putting a game up every week on Xbox Live Arcade and Nintendo is going big on its WiiWare download service, the PSN Store is still running low on original games. Despite the recent facelift, week after week goes by with nary a new game on the service, and the PAL store seems to be the worst afflicted. For instance, while the rest of the PS3 owning world is quietly getting its head around Echochrome, we’re only just getting Dark Mist – a game that launched in Japan back in November. 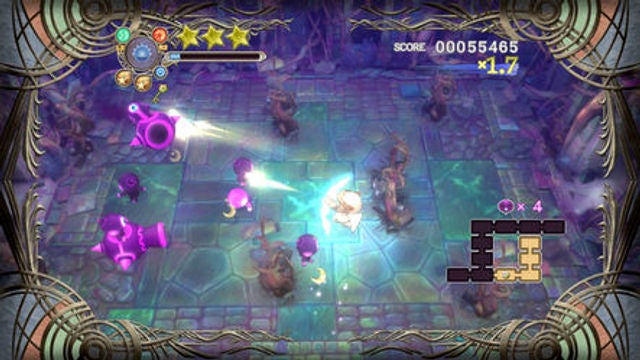 Was it worth the wait? On first impressions, it looks like the answer might be yes. Imagine a Zelda-style 2D action RPG from the PlayStation era, but updated for the modern HD age. While a dungeon crawler, Dark Mist has a lovely line in cel-shaded characters and monsters, not to mention some beautiful dungeon scenery; all rushing fountains, glowing vegetation and intricate textures. It’s actually a much better looking game than the screenshots on this page make it look. 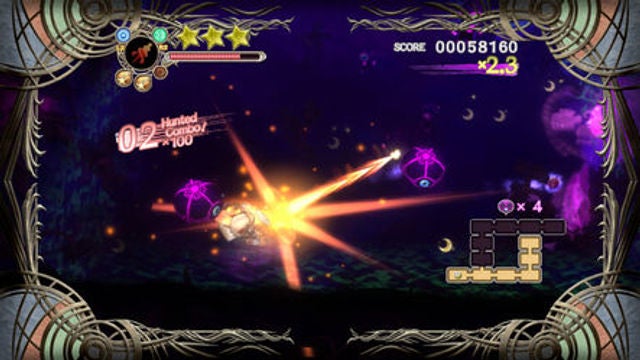 Start playing the game, however, and it soon becomes clear that all is not as you might expect. You see, though Dark Mist looks like an action RPG, it’s actually a shoot-em-up. Sure, the fantasy setting and what passes for the story (warrior Goddess takes on evil forces) puts it in RPG territory, but in reality each level of the game’s dungeon is merely a series of chambers in which you blast the various monsters using your mystic bow. The only elements of adventure or exploration are in navigating the maze-like environments and finding keys to open doors. If you’re looking for narrative, puzzles, quests and side quests or anything beyond blasting hordes of beasties to kingdom come, Dark Mist probably isn’t for you. In a way, it hearkens back to the days when 8-bit developers gave old ideas a new lick of paint by changing aliens to mythological monsters and space stations to the temples of Ancient Greece. The fantasy stuff is really just a skin, no more. It’s only when you forget the trappings and switch to the game’s optional twin-stick control method that everything truly falls into place.

Still, if you like an old-school shooter this one does have a few interesting ideas. The biggest is probably the mist of the title. It fills most of the rooms in each dungeon, restricting your vision, concealing monsters and covering fatal drops. You can disperse the area around you by performing a spinning melee attack, activated by shaking your sixaxis controller, or occasionally clear whole rooms of the evil fog by destroying particular creatures. 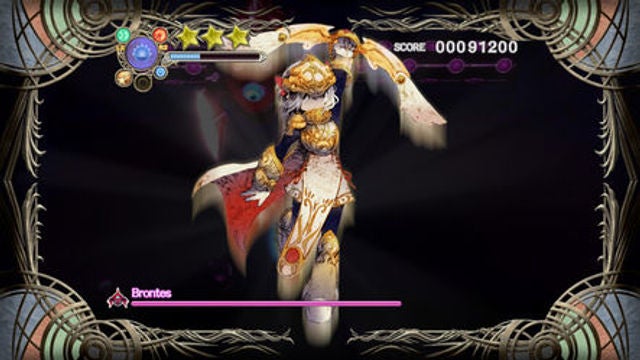 Secondly, you do at least have more than one weapon to play with. The square button (or the second stick in twin-stick mode) handles your main weapon while the circle button dishes out a good old fashioned smart bomb. The triangle button, however, unleashes your current special attack. You have three of these, selectable using the L2 and R2 buttons, ranging from a long-range, bouncing ‘meteor attack to a shotgun-like starburst and a short-range heavy blast. Ammunition for these attacks isn’t unlimited, but you can easily stock up by collecting moon fragments from downed enemies.


It might be simple, but on a minute by minute basis Dark Mist is surprisingly addictive. The blasting is relentless and certain monsters require a little tactical consideration if you want to confront them and survive. The game plays some nice little tricks on you by hiding doors, pathways and gaping chasms in the mist, and while there’s not a whole lot of variety in the graphics or the creatures, there’s still a sense of progression as you move from level to level. The difficulty rises nicely as you move through the game and even the occasional boss battles prove relatively enjoyable. If it weren’t for a series of bewildering design decisions, I’d have it down as a basic but entertaining little shooter. 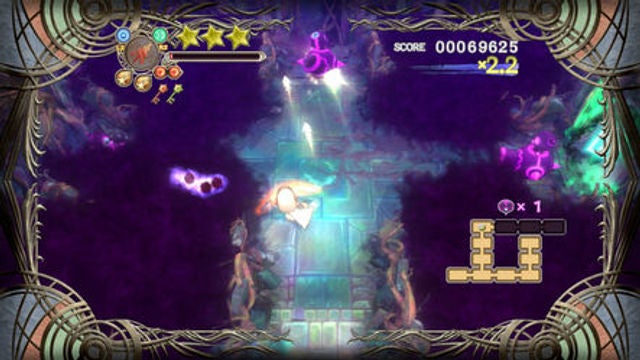 Sadly, several issues put that out of the question. First, there are no mid-level checkpoints or save game option. Every time you die you have to do the whole level from scratch, and should you quit the game, you’ll have to play the whole thing from the beginning. The brevity of the levels and the provision of infinite continues softens the blow, but the longer the game goes on the more it turns into a bit of a grind. Can you really face clearing out that set of rooms again, or do you just want to hang up your bow and try something less demanding instead? And while you can select levels from the game’s score attack mode, you can only crack away at these once you’ve unlocked them in the main game. Frankly, I think completing the game in one sitting – which is effectively what you’re being asked to do – is a little too much like hard work. Once you get to the last chamber of a dungeon level only to be wiped out for the sixth or seventh time, it’s all too tempting to give up.

To compound this, some elements of the game get noticeably more wearing with time. Shaking the controller to disperse the fog must have seemed like a good idea when Sony were desperately trying to encourage developers to make use of the Sixaxis’ motion sensitive controls, but in practice it’s a real pain. Having to do it when you’re in the middle of a tight boss battle is an additional handicap that you don’t really need. 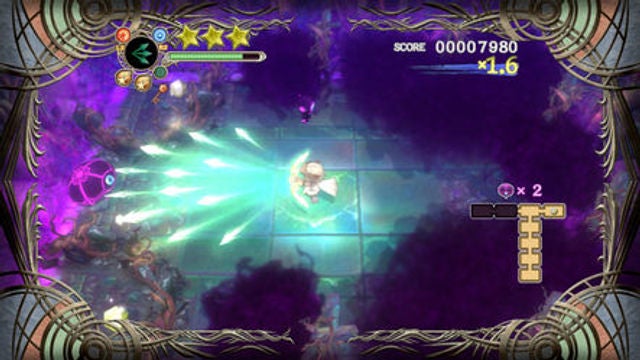 On the other hand, you can’t help thinking of features that could have been implemented but weren’t. Some might have added some much needed depth to the experience. If a game looks like a dungeon crawler, why not add a simple weapon or armour upgrade system? Why not throw in spells or add more interesting monsters or environments or new special attacks. Most of all, why not add online and offline co-op play? If any game could have benefited from it, it’s this one. Had Sony thrown in co-op and a selection of different characters, it might have had a Gauntlet for the noughties.


I understand that some of these issues have been addressed with an expansion pack in Japan, but if so that begs the question: why didn’t Sony roll the pack into the main game when it went on sale so much later over here? It seems silly to release what feels like half a game now and lose a significant portion of the potential audience when Sony could be releasing a more fully rounded product and keeping everyone happy. After all, if people don’t have fun with the original game, why will they feel the need to shell out for the expansion? 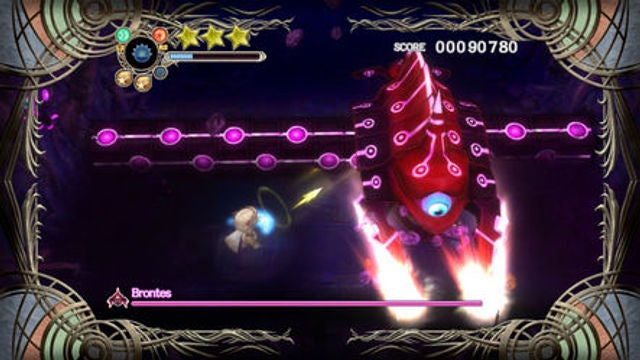 As it is, Dark Mist is pretty, addictive and enjoyable in small doses, but while it’s bound to find fans among the hardcore score attack fraternity, it’s not a great game for the average player. With original, quality PS3 games on the PSN Store in short supply, I’d put that down as a missed opportunity.


An interesting dungeon crawl/shooter with nice visuals and simple but addictive gameplay. Sadly, the lack of in-game saves and checkpoints gets more and more annoying the longer that you play.