Nearly eighteen months after its PC debut, Dark Messiah of Might and Magic arrives on the Xbox 360. We never got around to looking at the original version, but it wasn’t for lack of interest. This is, after all, the game that came across like the bastard offspring of Thief, Oblivion, Half Life 2 and Ultima Underworld. A fantasy FPS with RPG elements, built on the Source engine and featuring a remarkably flexible approach to combat – really, what could be finer? 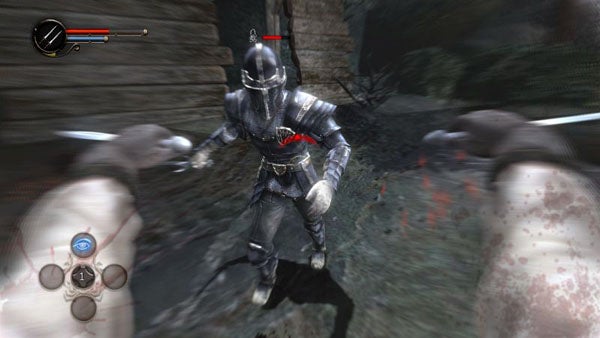 Of course, on the PC the reality was a little different from the promise. The game was buggy at launch, and not everyone who played it really understood the game’s potential. Still, with eighteen months to update and polish the game for its console incarnation, Ubisoft must now have a winner on its hands. Right? 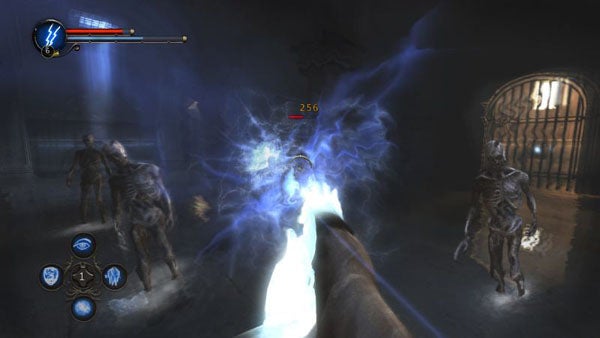 Yes and no. Dark Messiah still presents a beguiling mix of FPS and fantasy RPG elements. As in an RPG, you choose from four character classes at the beginning of the game, and whether you play a warrior, an archer, a wizard or an assassin really will have an impact on how you play the game and on the tools you’ll have at your disposal. The warrior, for instance, rewards the rush and attack approach, while the archer is more about FPS-style run and gun antics. The wizard has some heavy-duty spells and makes a great choice if you’re the type who went plasmid-crazy in Bioshock, but feels weak in melee combat. The assassin, meanwhile, suits those – and only those – who like the stealth approach. 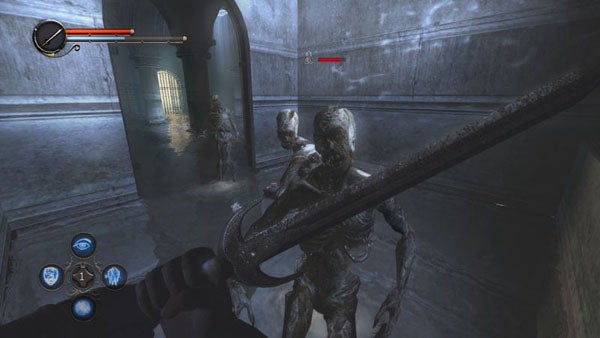 Cleverly, each class has its own specialist arms and armour, limiting your choices later on, and each class develops new skills with experience, earned – as in an RPG – by completing quest objectives and killing monsters. An easy-to-use skills and inventory screen is only a press of the B button away, and you can assign spells, skills and weapons to the directions on the D-Pad if you need rapid access. There are even swords to forge and magic items to discover along the way. While Dark Messiah veers too hard towards the FPS side to be called a true FPS/RPG hybrid, it has enough role-playing stuff in there to make it more than just the new Hexen or Shadowcaster.

Another thing the game gets right is its approach to melee combat. With sword, staff or daggers selected, the right trigger sends out a quick blow while the left trigger parries. Press and hold the right trigger and you strike out with a high-powered thrust or slash, while pressing the left trigger and then the right unleashes a kick that sends your target stumbling back. It’s actually pretty effective, and it also helps that Dark Messiah goes big on ways in which you can use the environment to despatch numerous orcs, ghouls and goblins to their doom. Off-balance beasties can be kicked over the edge of a precipice, into waiting fires, or against the various spiked racks that someone has carelessly left littering the game’s locations. See a poorly constructed platform holding a collection of heavy barrels? One good whack on the support and those bad boys will be rolling over black-armoured guards before you know it. Similarly, if there’s a flimsy rope holding back a heavy column, you just know it has not been left like that by chance. 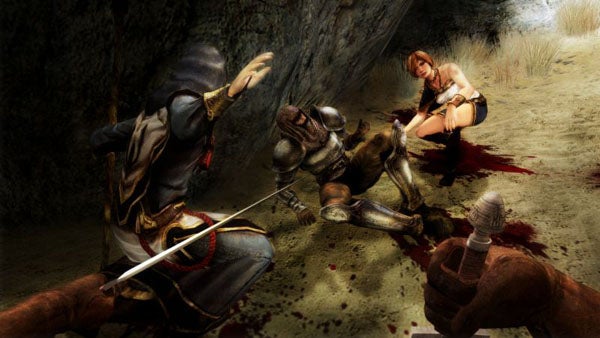 Now, when it’s good, Dark Messiah is almost as good as you might imagine. When you’re climbing a staircase that spirals its way up the side of a mountain, booting off one orc, slashing at another then sending a fireball towards a dynamic duo of archers on a platform just behind, the game gathers momentum. Suddenly you get the sort of heroic fantasy feel that the developers were clearly striving for. It’s great to get a sense that your powers are developing, and – like Bioshock – you soon learn innovative and entertaining new ways in which spells or skills can be successfully applied to cull the local goblin population. Better still, the game even packs in a nice, light sense of humour that alleviates some of the more po-faced fantasy elements. Guards and creatures can be heard conversing about their lot in life, while the taunting and goading in-combat – while repetitive – does include a few gems. And if the plot is a little predictable, there’s an interesting battle for your heart and soul going on-between a goody-two-shoes girl sorcerer and a seductive demonic babe. There’s even an attempt to follow Knights of the Old Republic in giving you the chance to go good or go bad later on. 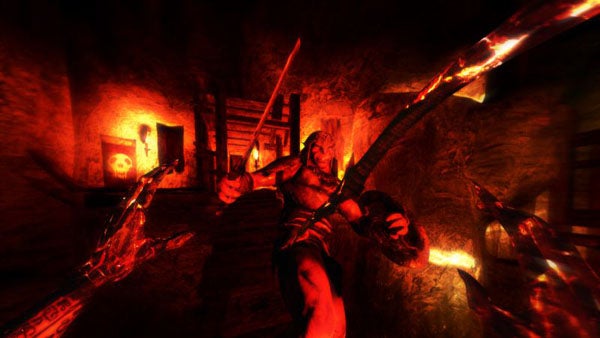 The problem is that Dark Messiah isn’t always – or even frequently – that great. The biggest fault is probably the pacing. Some of the best bits are over in a heartbeat, while some of the worst chunks of dull exploration and repetitive combat seem to drag on interminably. Sequences in gloomy temples and spider-infested tunnels prove particularly irritating, especially when the spiders carry poison in their bite, and there’s at least one boss battle that turns into a tiresome war of attrition rather than a test of skill or ingenuity. For every ten minutes when the game becomes a mildly sadistic goblin-slaying playground, there’s another ten minutes where it’s just a bit of a grind. And while I like the use of platforming elements, there are times when the controls just aren’t quite responsive enough to do the job. While we’re on that subject, is this the only game in recent years where you have ropes but can’t actually swing on them?

In addition, eighteen months have not been kind to Dark Messiah in some really key respects. Ubisoft Annecy deserves credit for adapting the game so well from keyboard and mouse to gamepad, and for streamlining some of the levels and game mechanics for a console audience. However, it’s a simple fact that this Source-powered game no longer looks a match for other FPS games that have emerged in the last year. Yes, the water effects still look great and there are some lovely open vistas from time to time, but put Dark Messiah next to Gears of War, Call of Duty 4 or Bioshock, and its slightly dull textures and murky scenery just don’t cut the mustard. The lighting is bit flat and uninspiring and the implementation of HDR is plain weird. There’s no subtle fade or sudden bloom between the stygian gloom of many interiors and the bright outdoors scenery, just a nasty artificial switch. Up-close, many of the monsters and human enemies look surprisingly rough. 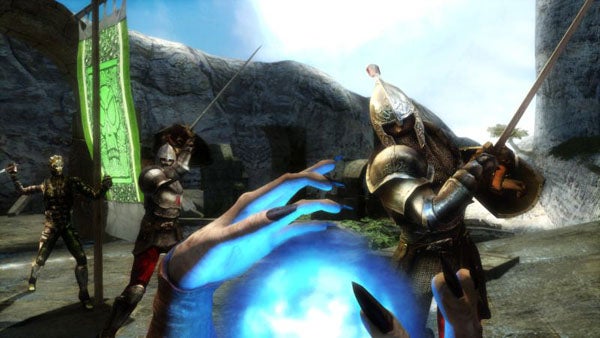 Worse, there are several technical issues holding the game back. The most irritating is loading times between levels and when reloading saved games or checkpoints. Nothing spoils the flow of gameplay more than a lengthy wait after every death – particular in the more difficult sections of the game. Stuttering frame rates and the odd visual glitch really shouldn’t happen on a game that doesn’t look all that cutting edge, and the game has crashed more than once while trying to load a cut-scene. Usually I’d put this down to pre-release software, but here I’m not so sure.


Even some of Dark Messiah’s best gameplay features suffer in comparison to what we’ve seen in Bioshock. After freezing, flaming and electrocuting our way through Bioshock, Dark Messiah’s more obvious and prompted uses of spells and environmental kills no longer seem quite so brilliant. 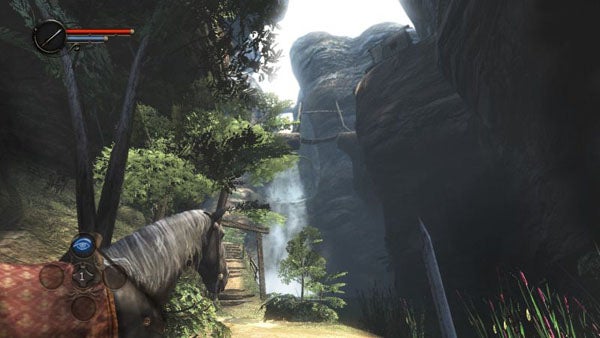 Despite all this, Dark Messiah isn’t a bad game – it’s just an inconsistent, irritating and only occasionally brilliant one. The single-player campaign is fairly lengthy, and the multiplayer options, which put the emphasis on Battlefield-style teamplay, are intriguing (though a shortage of players curtailed my exploration of them). If you’re a fan of fantasy and FPS and you’re prepared to turn a blind eye to the dated visuals and some of the more tiresome chunks of gameplay, then there are elements of Dark Messiah: Elements that you’ll definitely get a huge kick out of. Those are some fairly big caveats, however, so if you’re just looking for a good, solid action game or an epic adventure to lose yourself in, look elsewhere.


A fantasy FPS/RPG hybrid packed with good ideas, but let down by inconsistent pacing, difficulty and visuals. Hardcore dungeon delvers may enjoy it, but mainstream FPS fans have better options to consider.