Available on PS4 (version tested), Xbox One and PC.

The best way to sum up Danger Zone 2 is that it embraces Burnout’s beloved ‘Crash’ mode and dedicates itself to it wholeheartedly. This was the same idea with the prequel – smartly named Danger Zone – and given that EA refuses to give us a new entry in that franchise, Three Fields Entertainment has tried to take up that mantle for the second time. While the end product is pretty good, it still fails to capture that magic.

As a complete experience, though, that’s not necessarily as bad as it sounds. Based around the premise that you control a vehicle which exists to smash into anything that moves, the joy is trying to make these crashes a thing of beauty as they all link together resulting in high scores you can brag about on a leader board. It’s all very familiar and comforting, and getting to fly down highways in the United States knowing carnage is only seconds away is exciting. Because of course it is. In many ways, it’s one of the oldest video game premises in the book.

It’s never as simple as this, however, as you have to delicately balance everything you see in front of you. So, for example, rather than just treat all traffic like an obstacle, you can ‘check’ cars and then control where they end up by holding the relevant buttons. It’s a great way to rack up more points, and trying to figure out where you want to hurl these pieces of scrap metal almost acts like a puzzle. You want to shift them to wherever is going to cause the most destruction while also keeping an eye on the road for tokens that will help you in your quest to be number one. 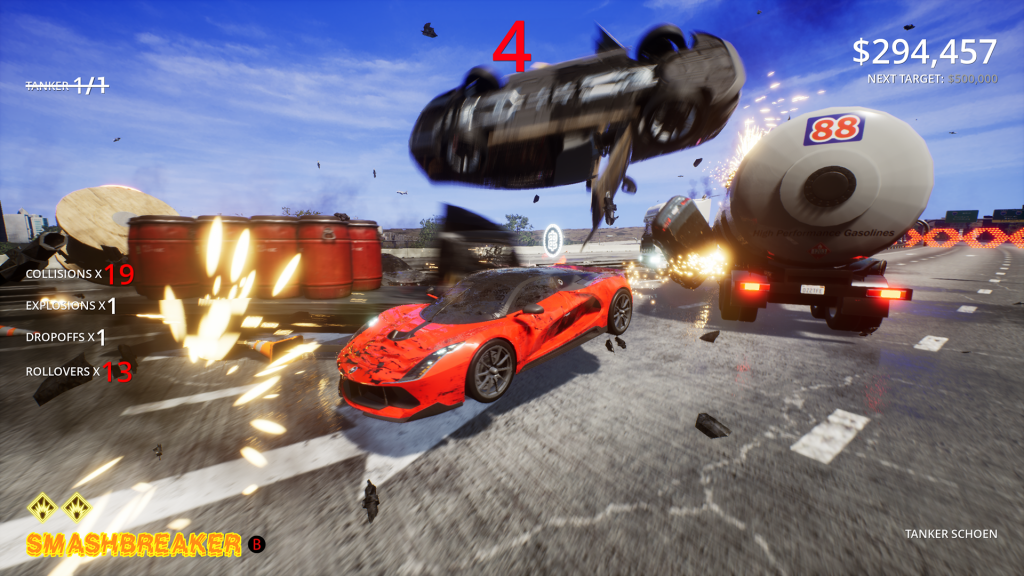 That’s important to remember, too, because if you do just focus on mayhem you’ll never improve, or get anywhere near a platinum score. Balance is key here, which means driving like a loon, taking advantage of whatever track you’re currently on, and only triggering anarchy when the time is right.

On top of that there’s specific goals to try and achieve to increase your score further, and if you’re just looking for nothing but speed, you can do that by mastering how to boost. Manage to do it constantly without taking any heavy damage and Danger Zone 2 will allow you to continually get faster. If you play car games for that thrill of breakneck acceleration, this does a decent enough job.

There’s also enough to make it feel far improved over the original, and the developer’s insistence of wearing its heart on its sleeve is welcomed. It would be nonsense to pretend this didn’t spill from a studio who love Burnout, and embracing that just makes for a more enjoyable experience especially when Three Fields Entertainment starts to have some fun. There’s few things as enthralling as zooming around corners in an F1 car knowing that if you get everything correct, you will be involved in a crash to end all crashes. Variety is not an issue.

Where Danger Zone 2 falls short, though, is that it’s just not padded out enough. If you’re used to this type of game it’s unlikely you’ll struggle to any great degree, and when all is said and done there isn’t enough to return to. Once it’s over, it’s over, and the lack of a multiplayer mode really is disappointing, mostly as that one addition could’ve kept this in your console until the end of the year. If you were hoping for a serious challenge, you’re probably best looking somewhere else. 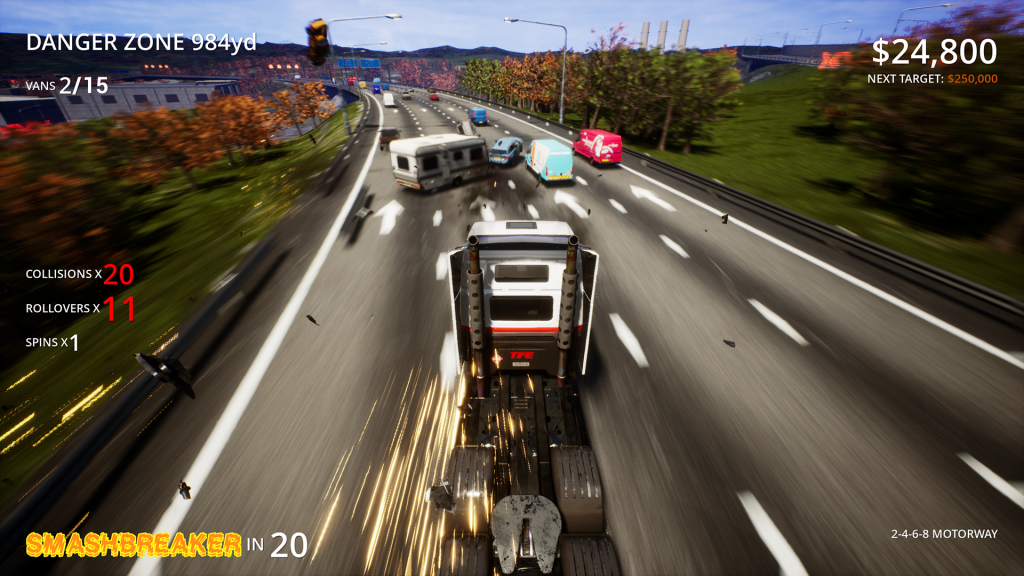 There’s also the small issue of technical problems that do rear their heads more than they should. Aside from the physics engine being inconsistent, on occasion cars just appear from nowhere which will throw you off your strategy entirely. If you’re driving at 100mph+ and then a vehicle pops up in front of you as if it’s been summoned by a wizard, you are almost guaranteed to be heading for disaster.

To hurl some more shade at Danger Zone 2, no, it’s not the best looking game in the world either. It’s certainly not ugly, but dull would be appropriate and in terms of polish this lacks what you’d expect in 2018, notably because this does cost more than its predecessor. When that’s the case you’re more than within your rights to want a bit more.

If you are looking for a knockoff of what Burnout used to do so well, however, Danger Zone 2 will tick most of those boxes as long as you don’t go in thinking you’re getting something of a similar ilk. It’s not bad by any means and is plenty of fun. It may just fall short in a few too many areas to really allow you to invest as hoped.

Danger Zone 2 is a great love letter to the Burnout we all know and love, even if it does fall short in many areas that stops it from truly getting to the same level.