What are the Damson Headbones?

The Damson Headbones are bone-conduction headphones. These are rather unusual things that vibrate the area above your inner ear to create sound without using a traditional speaker driver at all.

The obvious question: why? The Damson Headbones let you hear what’s going on around you while listening to music, and are much better at coping with a lot of ambient noise than normal open headphones. Your music and the outside world just don’t compete as they do with normal headphones. Instead, they sound quite separate. It’s pretty neat.

The Damson Headbones are for outdoors fitness freaks and other people who want to listen to music without reducing their ability to hear, well, everything else. They also get a few more portability points thanks to Bluetooth wireless. However, we don’t think the design works quite well enough for running or other vigorous exercise, and as with most other bone conduction headphones the sound quality is fairly limited. 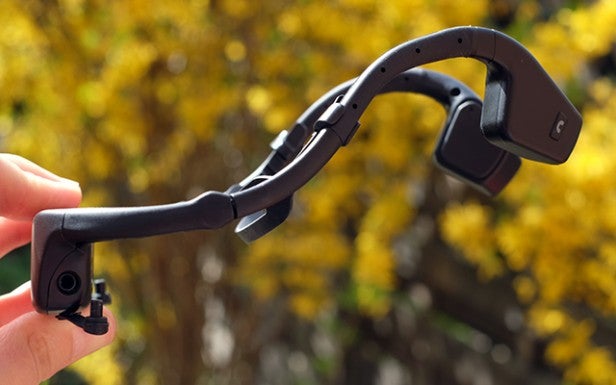 Only spend two seconds looking at the Damson Headbones and you could come away thinking they’re normal sport-style neckband headphones. They are anything but.

Instead of having normal earpieces at each end, you’ll find two plastic pads. These sit just in front of each ear and vibrate the tissue above your ear’s internal gubbins. Perhaps the most high profile use of this tech was in the discontinued Google Glass, although we’ve tried a few different pairs of headphones using this tech too.

As these pads need to have a secure spot on your head, they have a fairly strong clamping force that feels a little as though the Damson Headbones are squeezing your head. While the headset is light, there is a bit of a comfort compromise. 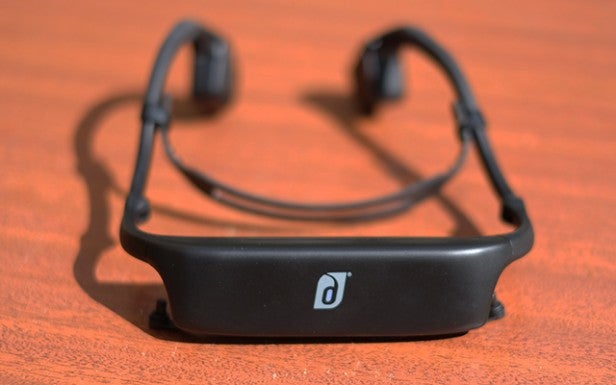 To keep them doubly secure, the Damson Headbones also have a rubber securing band, which is adjustable and rests towards to the top of your neck. It keeps them fairly stable in most situations.

Stability is not the issue, though. One of the Damson Headbones’ most severe issues is that there’s clearly a bit too much of set’s weight sitting on the very back part of the neckband. This seems to be where the battery lives.

When running, it’s secure enough but the sensation of the rear part of the Headbones wanting to move downwards, therefore pulling against the rubber securing band, just isn’t that nice. It feels as though they don’t really want to be on your head. Then there’s the effect of the pads themselves. 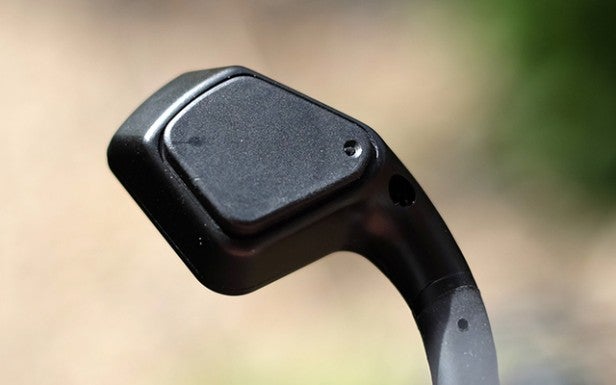 The bone conduction pads vibrate fairly strongly, effectively turning parts of you into the speaker driver. For the most part this doesn’t feel too weird. However, when the Damson Headbones try to recreate bass, the vibration frequency naturally decreases and the amplitude increases to compensate, resulting in a slightly odd, buzzy feel against your skin.

We’ve heard Damson claim you won’t notice it after a while. But it still feels pretty weird to us.

They take some getting used to, and even after using the Damson Headbones for a couple of weeks, we were left wishing these issues weren’t so obvious.

We have a way to go before the functional basics of bone conduction are perfect, but the Damson Headbones do try their best. For example, the Bluetooth wireless makes them far more useful, especially for city-based runners and cyclists who really need to keep their wits about them.

Pairing works just as it does with any other set of Bluetooth headphones, and we didn’t notice any serious, recurrent signal issues. We had one short bout of cut-outs, each lasting just a fraction of a second, but for the most part performance was very solid.

With most Bluetooth headphones you should expect occasional glitches from interference. 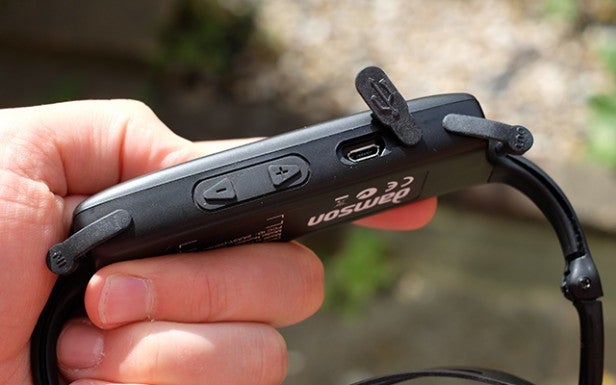 One other stroke of genius in the Damson Headbones is the 3.5mm jack that sits on one end, letting you plug in ‘standard’ buds when you don’t need to listen to what’s around you (a pair is included). This effectively turns them into normal sporty Bluetooth headphones, which is pretty neat. And it’s welcome too, because the sound quality available from the bone conduction ‘drivers’ isn’t great.

There’s also a 3.5mm input to bypass wireless, and an integrated mic lets you use the Headbones as a handsfree headset. A call button on the right arm makes accepting calls dead easy. But back to the important part: sound.

It almost feels unfair to judge the Damson Headbones by the standards of ‘normal’ headphones. But as many of you may not have had a chance to hear what bone conduction headphones are capable of, we’re not going to hold back.

They sound worse than virtually any normal pair of headphones. Worse, too, than some of the earphones you get bundled with phones and (the few remaining) MP3 players.

The Damson Headbones sound a bit like listening to, say, a Bowers & Wilkins Zeppelin at high volume, but through a thin wall. Mid-range and bass clarity are poor, sounding foggy and indistinct for something that costs £100. There’s treble, and there’s bass, but the mid-range definition needed to provide coherence and cohesion just isn’t there.

We heard better clarity from the Google Glass bone conduction earpieces, but that’s largely because Google’s headset didn’t even try to create any real bass frequencies. The Damson Headbones try, and fairly hard too. 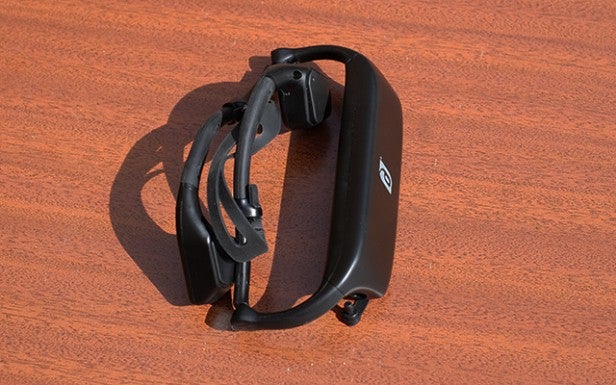 There’s a lot of lower-end boost here, an attempt to make up for the natural deficiencies of trying to turn someone’s head into the core part of a speaker. It doesn’t work all that well, though. Bass depth is poor, which seems to be a limitation of the pure physics of this whole ‘bone conduction’ idea.

What you end up with is a sort of dominating low-ish-end that’s the sort of unbalancing influence we complain about in standard headphones with unruly bass. To be fair to Damson, though, it’s still a more satisfying sound that you get from the reed thin bone conduction setup of Google Glass.

Lower your expectations and you may be happy, but we continued to be disappointed by the experience of listening to beat-y or more aggressive music that’s generally suited to a work out. It just doesn’t sound great and there’s the constant tickle buzz of bassier tones to consider too. Bass drum kicks feel a bit like someone tapping the side of your head with a tiny pen lid. 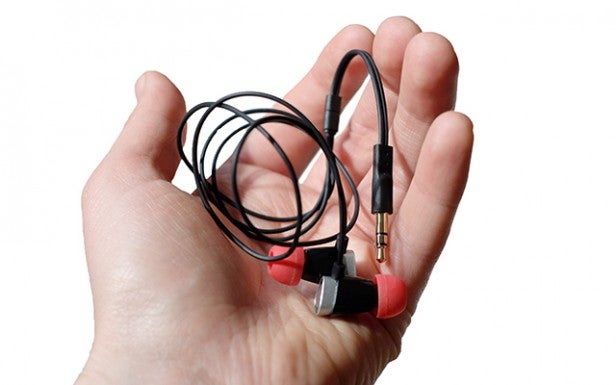 Sound quality improves a whole lot when you plug in the included earphones. They’re not £100-grade buds, of course, more like respectable £15-20 ones, but have none of the issues of the bone conduction audio.

When using these earphones you can actually wear the headset around your neck rather than on your head. We found this more comfortable as otherwise there’s a bit too much going on in and around your ears. 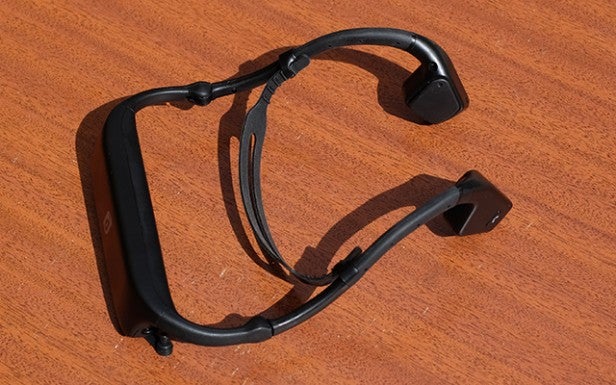 Should you buy the Damson Headbones?

Bone conduction headphones such as the Damson Headbones are interesting, but ultimately not all that useful unless your needs are 100 per cent in line with what they offer. As promised, they let you listen to music and other audio without totally muddling all other noise.

As an alternative to keeping one earphone in while running on the streets, they’re pretty handy. However, comfort and sound quality are much worse than a normal pair. We’re also a little concerned about any suggestions they may be perfect for cyclists.

Particularly when cycling on busy roads, the issue with listening to music is not just about blocking out sound but distracting the rider’s attention from their surroundings. Of course, whether you have the road confidence to make using the Damson Headbones a good idea is something only you can answer.

The Damson Headbones certainly fulfil their mission statement of delivering audio that doesn’t try to mute or cut into other noise. However, limited sound quality and being not all that comfortable for runners makes them hard to wholly recommend.

An intriguing headset with some thoughtful touches, but one that ultimately has a few too many problems, both in terms of practicality and sound quality.