When basing a game on a real world sport, there’s a tricky creative decision for developers to make. Sports present something unique, you see; namely an existing game design. Should studios stay absolutely faithful in reproducing a sport’s rules, structures and techniques, or relinquish a little realism in favour of more playful or universally appealing gameplay?

The team behind Dakar 18 have clearly opted to pursue authenticity. Their game is an homage to the famed Dakar off-road driving event, which takes the ‘rally raid’ competition format. Rally raid is particularly distinct within motorsport, and in being defined by rules as much as driving technique, is something of a grand strategy game played out on sandy dunes.

In rally raid events, of which the Dakar Rally is the most famed example, teams traverse huge distances over rugged terrain – sometimes over 500 miles in a day. Often set in deserts and other open locations, the discipline essentially becomes a game of navigational mastery, as competitors dash between checkpoints tucked away in vast expanses.

GPS devices are not allowed, meaning drivers and navigators must rely on an on-board compass, and a paper ‘roadbook’ packed with symbols and notes about the coming journey. The vehicle’s odometer – which simply tracks mileage – is another vital tool for calculating position. As such, the Dakar rally is really about finding an intimacy with some of Earth’s most uninhabited and barren places. It’s also extremely dangerous, thanks to the severe nature of its host environments. Rally raid is timed like traditional rally driving, but the events typically last many days. Really it’s about navigating on the fly, observing the small details of a landscape while checking them against notes, and calculating distances covered to estimate position on a map.

Automotive orienteering is not an obvious foundation for a beguiling video game. A very real threat in the Dakar Rally is getting lost. Indeed, it is the event that saw UK Prime Minister Margaret Thatcher’s son Mark go missing in the desert for six days in 1982, after getting separated from a Dakar convoy with his navigator and a mechanic. That’s a terrifying ordeal in reality. In digital form? Getting lost trying to negotiate a vast swathe of sand hardly sounds like entertainment. But if you do tuck into Dakar 18, you really might spend a good bit of time lost, if not a full six days.

It’s worth saying at this stage that this review is passed on the recently patched PS4 code. Pre-patch, the game was reportedly something of a bug-riddled mess, garnering much negative critique. This review is based on the 1.02 patch that – at almost 30GB – was the promised ‘day one’ update that arrived around a week late. The patch made myriad tweaks across the title from gameplay fine-tuning and controller support improvements to visual and physics advances, and as it brings us the currently available version of Dakar 18, that’s what we’re reviewing.

Bigmoon Entertainment’s creation strives to capture the current Dakar event – now held far away from Dakar, in South America, due to security concerns in Africa – in meticulous detail. That means you get to try the route, which reaches almost 5,600 miles in reality, in either a rally car, bike, quad, truck or SxS buggy. The latter is a heavily modified version of the kind of utility vehicle you might see park rangers tootle about on – the motorsports versions joined the Dakar fold in 2017. 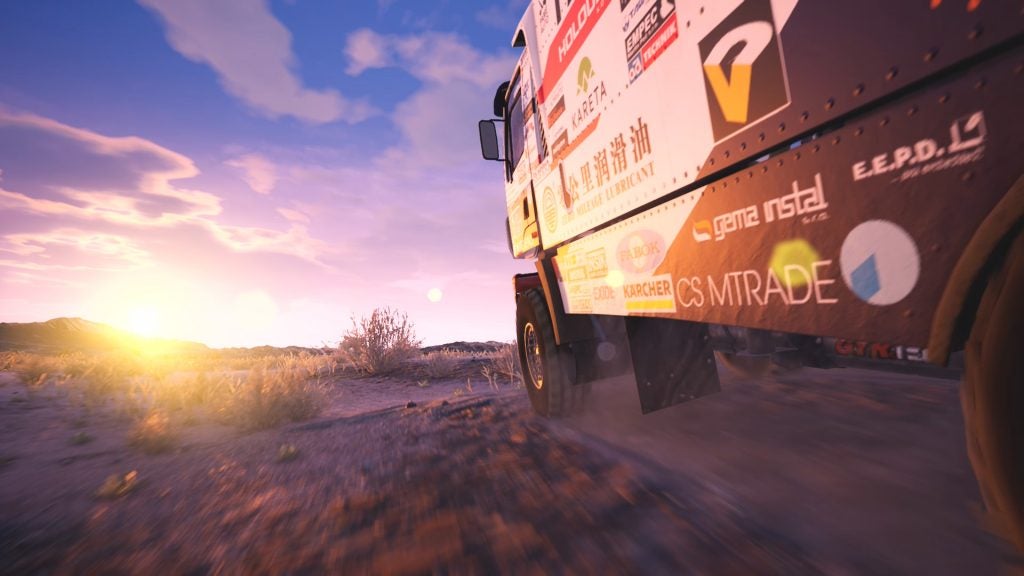 The vehicle class you decide on will create you a new game save, and from then on it’s a case of driving it through the Dakar rally in full. You can very easily have several games on the go at one time, but on the whole, a play-through asks that you take one vehicle through the entire course, navigating all the while.

Vehicle types certainly bring different handling, but in spite of Dakar 18’s rules realism, the driving quality is a little floaty, and somewhat leans towards arcade handling. Arcade handling in a sincere attempt to capture a gruelling motorsport brings about an early sense that Dakar 18 isn’t quite confident in what kind of driving game it should be.

Vehicle classes do also bring some distinct challenges. On a motorcycle, for example, you’ve no co-driver to provide spoken navigational advice, which you really don’t expect to miss until it’s gone. Trucks are lumbering beasts, but in certain cases their strength and weight offer a remarkable boon to endurance.

What really differentiates the experience and challenge, however, is the difficulty level you opt for on each play-through. Dakar 18 is effectively a game of finding unmarked checkpoints by using your navigator’s notes and comments, and having an eagle eye for where a rocky outcrop might be intercepted by a fence. At a Rookie level there’s always a blip on the on-screen direction guide marking where the next checkpoint is, and a more focused directional indicator when you get close to the right patch of terrain. 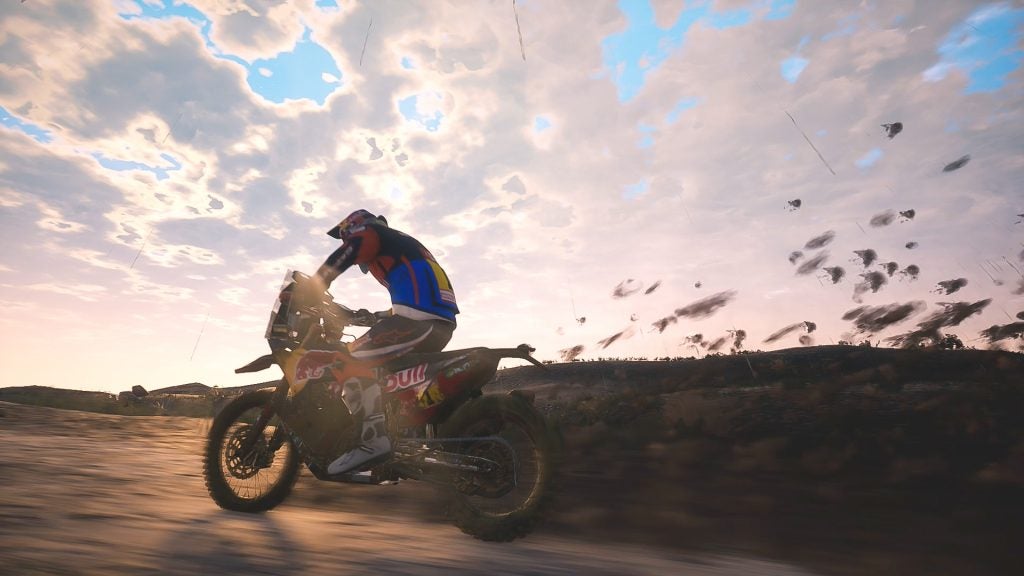 The thing with Rookie mode is that – while it’s particularly welcoming in a game drenched in jargon and atypical systems – following a compass point on a radar gets rather tiresome rather quickly. It turns out that at the Competitor difficulty setting, things play very different even though much is the same. Playing at Competitor level, you lose most of your on-screen guides, and you have to actually navigate.

That forces you to embrace what rally raid really is, and is the point at which Dakar 18’s potential reveals itself. While it can be frustrating at first, it soon becomes rather enthralling to navigate your way around, using your own smarts to get from A-to-B.

It is the very antidote to following a marked racing line as seen in so many contemporary racing games. There can be real tension to letting precious seconds tick away as you slow down to consider direction, and wrestling with the environment while eyeballing the compass, and your navigator’s roadbook, certainly makes the driving exhilarating.

There is also a Legend mode that removes all but the basic assists, giving the rally road devotee something to really tuck their teeth into so far as challenge goes. The thing is, what’s on offer around the core ‘navigate while driving’ gameplay is a little too underwhelming. 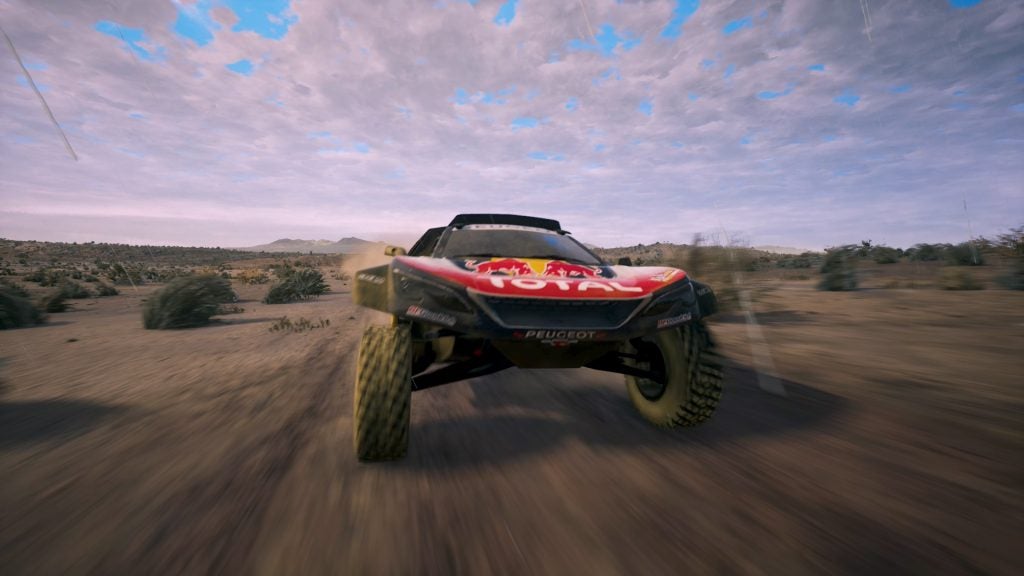 There’s not that much variety to handling within each vehicle class; visually things are underwhelming even post-patch, and too much of the driving is just too similar – a problem when you must cover such vast distances. The designers are probably right to faithfully replicate the kind of experience rally raid offers, and they’ve no doubt done the motorsport’s devoted fans a great service in bringing them an authentic reproduction of the sport.

But there really could be a few more modes to support short-form play sessions, or to mix up the experience with some more playful or contained modes. Online and split-screen multiplayer are on offer, as well as a ‘Treasure Hunt’ mode that lets you visit previously beaten rally sections to hunt for arbitrary hidden items. But the latter certainly gets tiresome fast, because meticulously inching over terrain you’ve already meticulously inched over – this time with less drama, tension and purpose – simply isn’t interesting enough.

With the modes included, almost everything boils down to going it alone in off-road terrain that you’re not quite sure you can tell apart from other off-road terrain, feeling on the verge of getting lost forever. That is absolutely what rally raid is, but devotion to source material is not the same as brilliant game design.

But despite it’s focus on authenticity, Dakar 18 doesn’t seem to want to be a simulator. There’s that aforementioned arcade handling, and the fact that you rarely feel truly connected with the uniqueness of the surfaces that pass under your tyres. There’s no need to worry about tyre pressure or how tyre tread might impact progress, for example: factors that might be part of a true sim. If Dakar 18 absolutely were a simulator, some of its slight failings around gameplay variety could be more easily forgiven. Simulators offer something very different, where accuracy trumps game design frivolity. 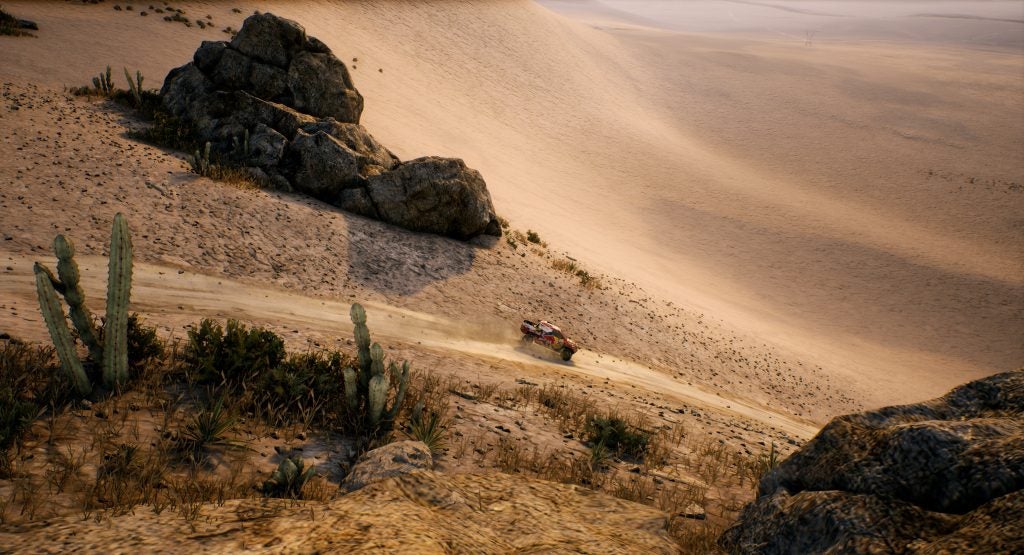 Yet Dakar 18 isn’t an arcade racer either. Your vehicles are generally too delicate for huge jumps from dunes, and there are no boosts or power-ups, or even energetic presentation. Throughout its delivery, Dakar 18 keeps things very formal; so much so that the opening tutorial video comes as an uncharismatic lecture on the game’s systems, rather than an engaging guide on how to play it. Fortunately, at least, there are rather more digestible tutorials should you need them.

So we get a game where vehicles handling like those of an arcade racer, all confined within the framing of something much more studious and sincere. It’s an unusual coupling, and you can’t help feeling that committing to one form or the other a little more would have made for a more lastingly enjoyable game.

Dakar 18 is a curious creature. It absolutely delivers something truly distinct in the wider racing genre, and though the core gameplay isn’t immediately accessible, it can be greatly rewarding to those that take a chance on tackling it properly.

The fact is that many of the fundamentals of rally raid make for abrasive gameplay traits. Getting lost is part of the real Dakar rally. In a video game losing your bearings can be greatly frustrating; but then finding a waypoint might only be so rewarding as a counterpoint to the moments in which you have a Mark Thatcher moment.

It’s a huge game, with an impressively sized 5,791-square-mile playable area. But at that size you want some variety, and there Dakar leaves a little to be desired.

Dakar 18 isn’t bad, it must be said. It is an atypical and challenging offering that needs a little polish and a few extra modes. While its commitment to the workings of its subject matter might put off some players, rally raid devotees should be thrilled to have their beloved sport catered for authentically. And with an open mind, many more driving game fans should find something enjoyable – if limited – under Dakar 18’s sandy bonnet.