Probably better known for its cars in the UK, Daewoo’s electronics division is a huge Korean brand – albeit somewhat overshadowed by Samsung and LG. Alongside its laundry, microwaves and refrigeration products, the company offers a couple of budget-busting cylinder cleaners – including the RC-350BKN tested here.

This incredibly compact bagged cleaner packs in a respectable 800W motor, comes with metal tubes, and offers a trio of tools. Its £60 asking price looks attractive but there are plenty of online deals to be had that make it even more affordable. Sadly, its low price doesn’t outweigh that it is hugely frustrating in use.

Having wrestled a few seriously heavyweight cleaners around the test bench of late, the RC-350BKN from Daewoo feels tiny by comparison. Just 35cm long, 25cm wide and weighing in at a fraction over 3kg, this pocket-sized cylinder cleaner is aimed at smaller homes and flats. Capable of being stored flat or upright, it could probably sit on a bookshelf if space is tight.

The hose, tubes and tools will take up a little more room, but they keep the compact theme going throughout. The lightweight hose is only 1.3m long plus a 20cm curved plastic handle. The push-fit tubes add a grand total of 85cm to the reach, and the main floor-head is just 25cm wide.

The upholstery and combined crevice/brush tool are small enough to have been designed for a doll’s house. The latter’s “crevice” part is only 5cm long, with a flip-over dusting brush about the size of a toothbrush. If plaque-vacuuming becomes fashionable, this is the tool for the job. 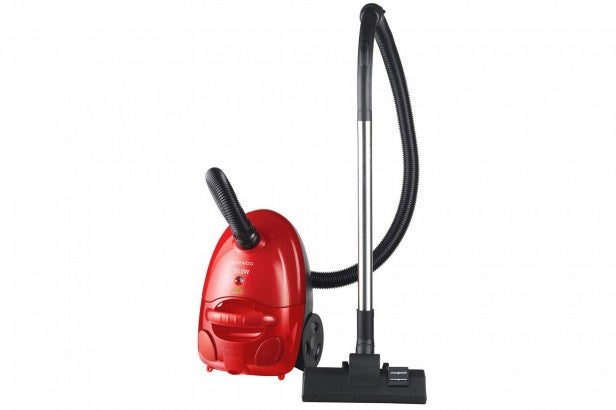 Despite the diminutive dimensions, the build and feel of the Daewoo and its tools are actually pretty good. Everything is fairly solid ABS plastic and the tubes are chrome-plated steel, so should stand up to plenty of dust-busting abuse.

The main floor-head has a pivot and swivel neck with a fair range of movement, rear rubber blade and a drop-down row of stiff bristles for hard floors. There’s even a little clip on the head that attaches to the main cleaner in one of two places, allowing you to store the whole ensemble upright.

The cleaner is basic but, equally, is without any major omissions at this price. Power is simply on/off, but you do get automatic rewind of its short 4.8m cable and a pop-up bag-full indicator.

The front clam-shell lifts up to reveal an easily removed paper bag. These are necessarily pretty small to fit into such a compact cleaner and don’t self-seal when removed, so care and perhaps some sticky tape are required when you change bags. Four bags are included in the box and replacements cost around a pound a piece.

The RC-350BKN has a fairly ropey C rating for dust emission based on its thin-sheet pre- and post-motor filters. The manual recommends these are merely tapped clean and eventually replaced. However, they’re made of a dual-layer foam so we carefully tried hand-washing and drying them, with no problem at all. This reduces running costs further still.

For such a small cleaner, the RC-350BKN is far from unobtrusive when it fires into life. Our noise meter made a mockery of the claimed 77dB energy label rating; it measured 83db on carpet and almost 84dB over hard floor. That’s up there with heavy main-road traffic noise, so don’t expect to vacuum around sleeping children or animals with this Daewoo.

Moreover, the high airflow through the main floor-head created a high-pitched whistle on several occasions, particularly with a brand-new bag (when airflow is highest) and over hard floors. Jackie emerging from the office to enquire whether I’d started testing dentist drills provides some idea of the type of sound emitted and its piercing nature. 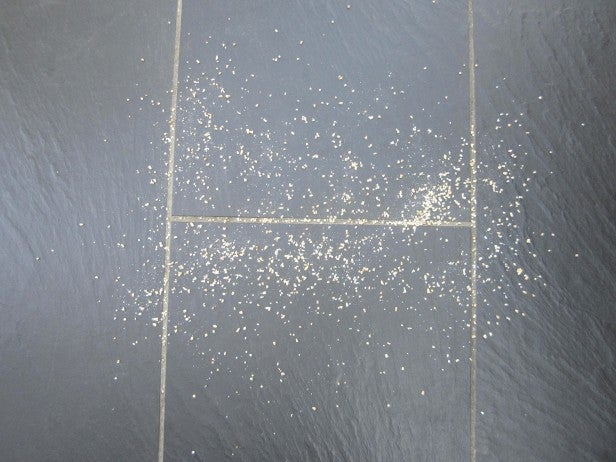 Ironically, the air whistling through the floor-head also demonstrates the impressive suction power and high airflow of this budget cylinder cleaner. Yet it struggles to translate that into effective cleaning ability.

Hard floors are its forte, with the floor-head’s rear blade and stepped bristles offering easy movement and the ability to pull in light debris from the skirting edge.

As we swept the head forward over our test patch of mixed cereal oats on ceramic tiles, the results looked okay – until we drew the head back. The front bristles swept debris in front rather than vacuuming it into the head, so promptly deposited most of larger particles back on the tiles and in the grouting groove on the back stroke. 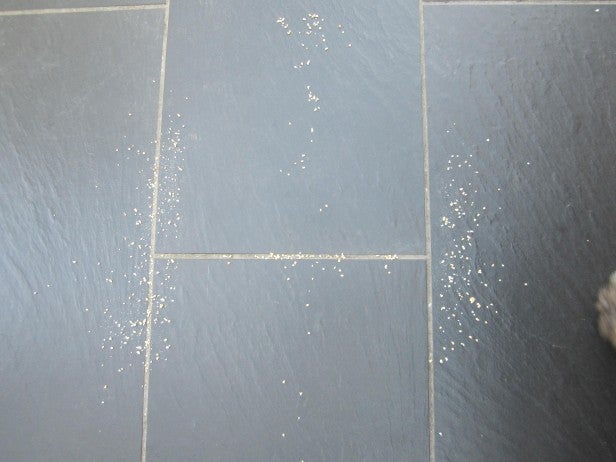 The RC-350BKN has some “handling” issues too. The cleaner’s light weight and top-mounted hose attachment point meant that sharp turns or quick changes in direction resulted in the cleaner flipping over.

In fact, it’s so that you hardly notice what’s happened, and end up dragging the cleaner along upside down, potentially scraping a trail on fragile hard floors such as softwood parquet. Since it actually worked just as well upside down, we eventually gave up righting it on carpeted floors.

Things became a whole lot stickier on carpets. The head’s smooth base and sealing rubber blade makes sure every watt of suction power goes into bonding the head to the floor.

On smooth, short-pile carpets it becomes pretty much impossible to move the floor-head without fully opening the suction release vent on the handle. That massively reduces suction at the floor-head, allowing the head to be pushed and pulled, but seriously reducing cleaning power and energy efficiency along the way.