Despite being announced ages ago it’s been a long wait for D-Link’s latest wireless broadband router and this was no doubt due to a recall the company issued in January after assembly errors were discovered in a small number of units. Well, the DIR-855 is here now and we find out whether it was worth this long wait. 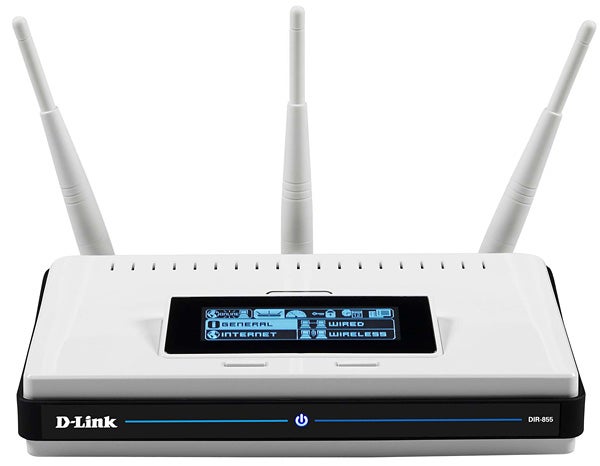 This is a dual-band router supporting operations in both the 2.4GHz and 5GHz wireless spectrums – the quad-band reference in the model name just means it supports simultaneous dual-channel operations for each band.


Just as most of the competition is turning to glossy black for their chassis design, D-Link sticks with white although we have to say this router does feel very solidly built. At the rear you have four Gigabit Ethernet ports and an RJ-45 WAN port which will require an external cable or ADSL modem with an Ethernet port for Internet access.


The top panel also sports a smart OLED (organic light emitting diode) display panel which provides plenty of information about the status of LAN, WAN and WLAN components. A couple of buttons below it enable you to flick through displaying port and router status, wired and wireless bandwidth usage, viewing wireless security settings and displaying the date and time. The router also has a USB port at the rear but don’t try sticking a storage device in it as it’s only used for loading USB flash drives with wireless configuration files created using the Windows Connect Now configuration wizard. 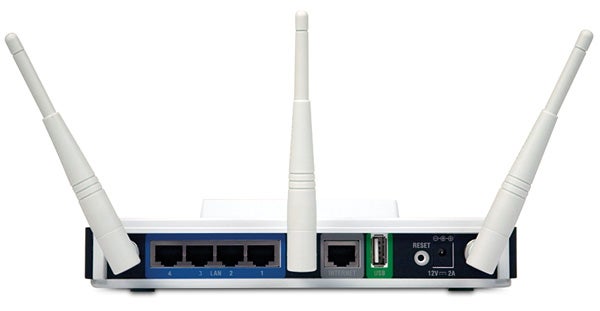 A CD-ROM based wizard makes light work of initial installation but you don’t need to use it as you can just point a browser at its default IP address. Watch out if you use the latter method as both wireless APs are switched on by default but wireless security is disabled for both of them. Nevertheless, the web interface also provides a wizard for setting up security and you can choose from WEP or WPA/WPA2 encryption and assign different encryption keys to each AP. Note that both APs are set to use only one 20MHz channel so you’ll need to change this manually if you want channel bonding in action.


The WPA Enterprise option allows you to use an external RADIUS server for user authentication and you can enable SSID masking and MAC address filtering as well. D-Link’s WISH (Wireless Intelligent Stream Handling) automatically prioritises wireless traffic where it can be left to look after traffic such as audio and video streams; set to automatic where it favours traffic such as VoIP over high demand traffic; or you can add you own rules applied to IP address ranges.

D-Link scores over the competition for the level of features it offers. Naturally, virtual servers and port forwarding is supported but you can restrict access using a MAC address list and prioritise specific application traffic with QoS (quality of service) rules which can also be applied to selected IP addresses and ports. The new guest zone feature will prove useful as the router can maintain separate SSID’s to allow wireless users to access the Internet only. Both APs can have their own guest zones, plus you can set up separate wireless security on each one and enable inter-zone access on either, which will allow wireless clients to see systems on the LAN. 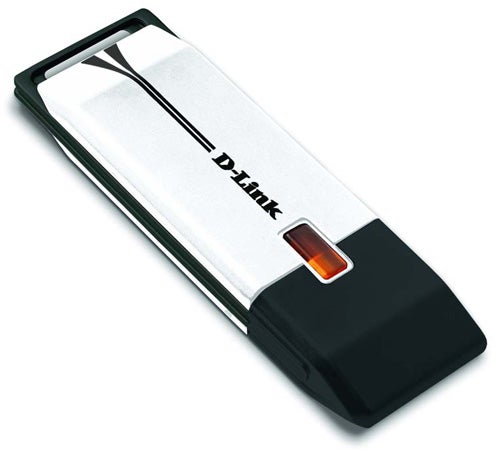 For web access controls, most home routers offer a very basic facility but D-Link goes much further as you can create a list of up to 64 website addresses and use the Access Control feature to apply rules that determine what each system can access on the Internet. This allows you to block access to all websites except those in the white list and rules can have time schedules applied to them to determine when they are active.


For wireless performance D-Link still uses the dubious practise of advertising top speeds of 600Mbps which we all know by now are simply unachievable in the real world. For testing, we installed D-Link’s DWA-160 dual-band USB adapter (shown above – an optional extra at approx £44) in a Fujitsu Siemens notebook running Windows XP SP2. The adapter comes with a handy desktop mount extender kit and a System Tray utility for scanning wireless networks and quickly connecting to them. 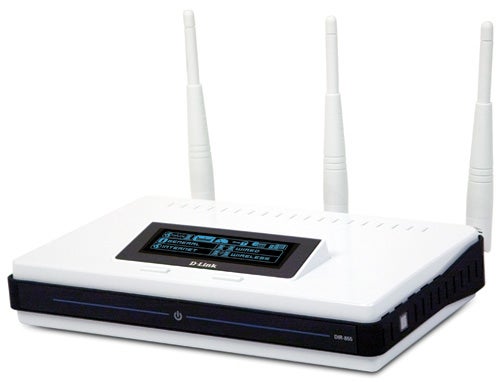 Starting with a connection to the 5GHz AP, we copied a 690MB video clip over a close range WPA2 encrypted link to a system on the LAN which took 87 seconds for an average of 64Mbps. We then reconnected to the 2.4GHz AP and saw the same copy complete in 96 seconds for an average of 57.5Mbps. Range is reasonably good for both APs as we took our laptop out in the garden and saw signal strength settle at around fifty per cent at a range of twenty metres from the house.


With basic wireless N broadband routers now available for less than eighty quid, D-Link is asking a lot for the DIR-855. There’s no denying it has more features than you can shake a stick at and wireless performance is better than most, but if you want a more affordable albeit less well endowed dual-band broadband router then check out Netgear’s WNDR3300.