The latest fad in the surveillance market is being able to keep an eye on your home and property from a mobile phone or PDA. We’ve seen some proprietary solutions garnering a fair amount of interest and D-Link now steps in with its Securicam DCS-2120 IP camera. Taking over from the DCS-2100G it offers support for wired and wireless network connections and the RTSP (real time streaming protocol). For mobiles and PDAs to access and view the camera’s video stream they’ll need to have a 3G video playback utility such as RealPlayer or PacketVideo installed. 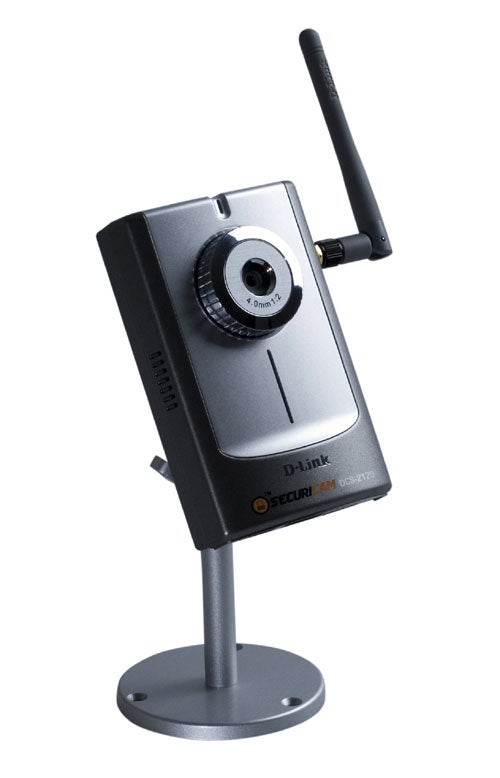 On paper the DCS-2120 looks to offer a good specification that rivals products such as Axis’ 207W. You get a 1/4in. RGB CMOS sensor, support for 802.11b/g wireless networks and the camera can manage up to 30fps at a top resolution of 640 x 480 pixels. Motion detection is on the cards and it also has an internal microphone allowing users to listen to the action in the area under surveillance. You don’t get options to connect a speaker for two-way audio communications but the 207W does have an extra I/O connector block for attaching external devices and alarms. Neither supports PoE but Axis is more generous than D-Link with its power cables as it provides nearly four metres.


Installation is handled nicely as the bundled utility searches the network for D-Link IP cameras and displays them ready for action. You can assign an administrative password, set an IP address and modify the wireless settings and after applying the changes it’s ready to go. The home page opens with a live view and a simple menu of chunky buttons to the left. The first takes a quick snapshot and saves the image to a location of your choosing on your local system. The connection options extend to selecting video and audio and choosing UDP or TCP as the transport. The last provides access to all camera configuration settings where you can select frame rates and resolutions, set up motion detection and activate the mobile viewing functions. There’s also a row of buttons below the viewing window for stopping and starting the video feed, accessing the digital zoom, setting the microphone volume and switching it off. The digital zoom is of limited value as all it does is magnify the pixels up to four times so any distant objects won’t see any significant improvements.

The camera comes with D-Link’s IP Surveillance software which allows you to monitor the live feeds from up to sixteen cameras simultaneously. Controls are provided for taking instant snapshots from the selected camera, activating motion detection and starting a recording session to a predefined folder on the local hard disk.


For normal usage with the camera being accessed by PCs we found overall image quality to be comparatively good. It wasn’t quite as sharp as the Axis 207W and the blue colour caste make it look rather cold but for a £150 IP camera it was pretty good. Unfortunately, D-Link didn’t fare so well in the action stakes as we found the camera was unable to convey smooth motion when set to the maximum resolution and frame rate. At the highest resolution the image was much smoother when the frame rate was dropped to 20fps with the top rate only working properly at 320 x 240 pixels.


Configuring the camera for remote access from 3G mobiles and PDAs is simple enough as you decide on a filename for RTSP streaming and either use the default port or enter a custom value. The biggest issue with the DCS-2120 is that you will have to make some sacrifices if you want to access it from a mobile. The camera can be configured to serve up surveillance to PCs and notebooks over a normal network or for mobile viewing but not both together. If you choose the latter from the management interface it drops the picture size down to 176 x 144 pixels and cuts the audio bit rate down to 12.2 Kbps. This works well enough for mobiles and PDAs but the picture quality on a PC is unusable so you’ll need to keep swapping modes depending on the type of access you want to provide.


For wireless connectivity the camera supports both Infrastructure and Ad Hoc modes but note that it does not function as an access point. In Infrastructure mode you’ll need a separate wireless access point and the camera must be configured with its SSID and security settings. We successfully connected a laptop over a wireless link to the camera using a Thomson SpeedTouch 807WL router via a WPA encrypted link. As we saw with our performance tests on the Axis 207W, an 802.11g link is more than enough to handle the video stream even at 30fps and will support multiple users accessing the camera.


D-Link is offering quite good value for a wireless IP camera and support for 3G mobile devices makes the DCS-2120 stand out from the crowd. Streaming quality isn’t that great but there are few competing products on the market that can currently offer this level of features at this price point. 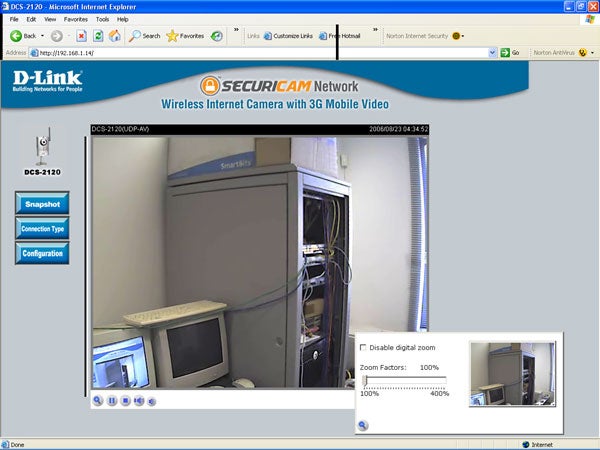 ”’The home page provides access to camera configuration, snapshots and the digital zoom.”’

”’Multiple windows can be created for motion detection and the triggered images emailed out or sent to an FTP server.”’

”’RTSP streaming can be customised to suit but for wireless access the camera must connect to a separate access point when in Infrastructure mode.”’