D-Link jumped on the draft-802.11n merry-go-round a few months ago with its RangeBooster N650 router which offers a good range of features but ultimately failed to impress in the wireless performance stakes. The DSL-2740B represents its next stab at the high-speed networking market and adds an integrated ADSL 2/2+ modem and a few extra features to the mix.


Along with the draft-n wireless access point and ADSL modem, the router has a quartet of switched Fast Ethernet ports but the USB port that had everyone baffled as to its use on the N650 has been removed. With regard to the manufacturer’s claimed speeds for draft-n wireless products it is worth reiterating the points we made with the N650. Speeds for draft-n wireless are touted to be in the region of 300Mbps. We already know from extensive testing that this is utter baloney but, even if it weren’t, unless you have Gigabit Ethernet ports on the router it’s impossible to achieve speeds higher than 100Mbps between WLAN and LAN systems. 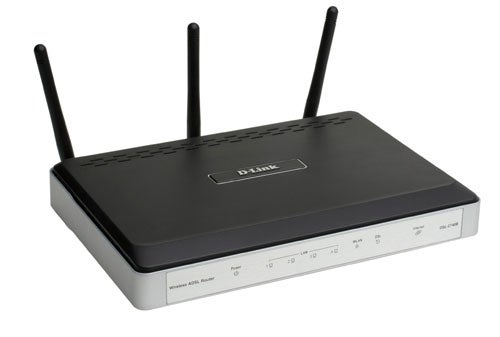 Back to the router and under the bonnet you’ll find a good range of security features which include an SPI firewall that can be customised with your own filtering rules and some useful parental controls. Wireless security looks good as well with 64/128-bit WEP plus WPA and WPA2 encryption, MAC address filtering and, for larger companies, 802.1x authentication via a RADIUS server.


We found installation easy enough as the CD-ROM based installation wizard searches for the router, checks to see if an ADSL connection is up and then asks for your ISP details. An entry was provided for BT Broadband so we just added our account details and we were up, up and away in a matter of minutes. The routine also runs through wireless access setup but does give you the option of leaving it unsecured.


From here on things didn’t go so smoothly as although we had Internet access we were unable to logon to the web management interface. The only way round this was to reset the unit back to its factory defaults and reinstall it again after which the problem disappeared. We were also very surprised to find that the SPI firewall and intrusion detection functions were switched off by default. Certainly, the former must be enabled without any delays otherwise you’ll have no protection at all.

A comparison with the N650 router shows there are more than few additions to the web interface menu. D-Link’s URL filtering tools have always been a cut above the rest and the router now allows you to create either black or white lists containing up to 30 addresses. This lets you implement a stricter system as you can block access to all web sites except those in your white list. This makes it much easier to set up parental controls for children as you can decide precisely which sites they are allowed to access. D-Link goes a step further as you can specify the MAC addresses of certain PCs or laptops and block or allow Internet access based on a daily time schedule.


For wireless performance testing we called upon a 1.6GHz Fujitsu Siemens notebook running Windows XP SP2 and installed D-Link’s RangeBooster N DWA-645 PC Card in it. Running the Iometer utility over a two metre open link to a Supermicro Pentium D 3.2GHz PC on the LAN saw an average raw read throughput of 60Mbps – around the same as for D-Link’s N650 router. We then activated WPA encryption and saw Iometer return only 42Mbps. Copying a 691MB video file across the airwaves produces equally dismal results with an open link returning 48Mbps and a WPA link dropping down to 38Mbps. 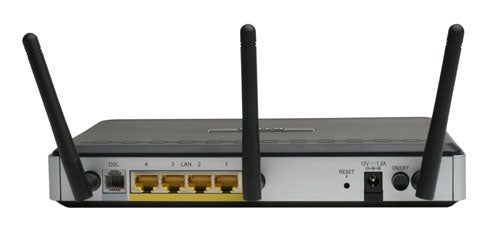 Tests over distance weren’t any better as moving the laptop to the floor below and placing two brick walls in the way slowed the D-Link down significantly with an open link delivering a meagre 27Mbps. We also encountered some irritating problems during testing as at one point the router’s DHCP server stopped dishing out addresses and the access point went AWOL as well. The only way to get them back was to reset the router back to its factory defaults and start again.


The DSL-2970B certainly delivers an impressive range of features although we’re not convinced of the value in some of them. You now have incoming and outgoing packet filters for blocking specific traffic in both directions and extensive quality of service (QoS) features although for the latter the manual is woefully inadequate in explaining their creation. You also get QoS facilities for wireless connections but these are not yet supported in the 802.11n draft specification which must be deactivated first making this somewhat self-defeating.


For wireless performance we can’t see much to be gained if you already have a standard MIMO router as speed and range improvements for these draft-n products are not good enough to justify replacing existing equipment. That said, the DSL-2740B does offer a lot of unusual features for the price with above average parental controls although we would recommend checking out Netgear’s DG834N router before making a decision. 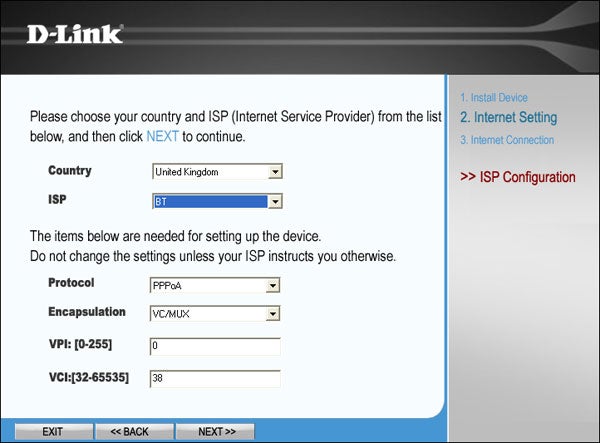 The CD-ROM based setup wizard had us up and running in a matter of minutes. 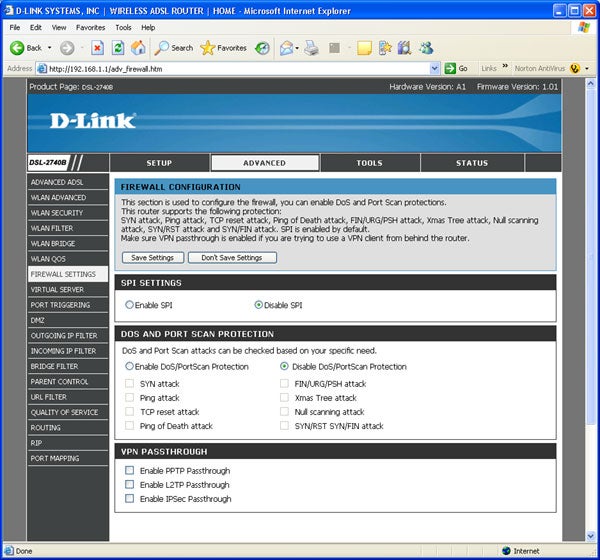 Make sure the first thing you do is switch on the firewall and intrusion prevention features. 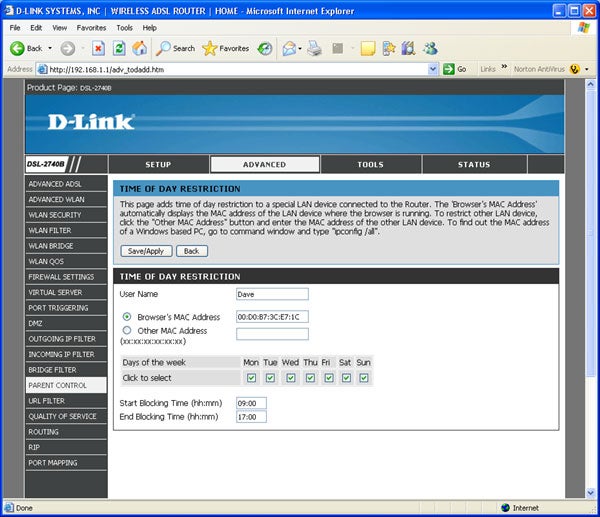 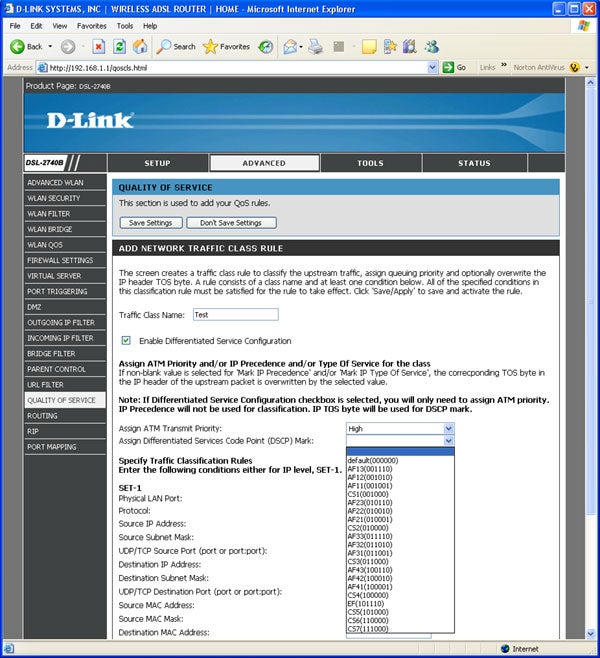 QoS features are extensive but don’t expect any help from the manual for setting them up. 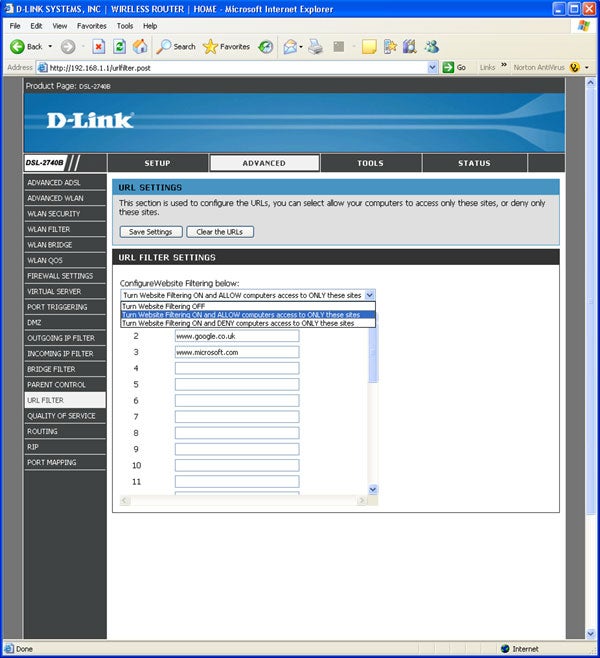