D-link’s forays in the NAS appliance market haven’t met with a great deal of success so far. Its DSM-G600 delivers a good range of features, including wireless access, for the price – but we found the bundled backup facilities comparatively weak, and we weren’t impressed with the compatibility problems we uncovered with certain IDE drives.


The DNS-323 represents D-Link’s next stab at network storage, and this time it has gone for SATA drives instead. The appliance is one of the smallest we’ve seen and its compact, matt-black aluminium chassis is designed to accept two SATA drives of your choosing. The entire installation process is completely tool-free – simply push the front cover upwards to release it and then slot in a couple of drives. The rear panel has a lever behind each bay to aid drive removal.


There’s not much else to see, as the appliance provides merely a single Gigabit Ethernet port for LAN connectivity and a USB port which can only be used to connect a suitable printer for sharing. For the price, we would have expected the option to attach external USB storage devices. 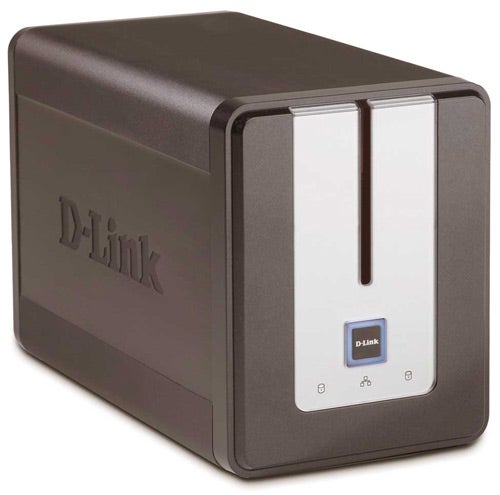 For testing, we used a pair of 250GB Western Digital WD2500 hard disks. After power up, we used the bundled Easy Search utility to hunt down the appliance on the network, discovering what IP address our router has assigned it. If you’re not using DHCP, the appliance uses its default IP address. From the utility you can go straight to the web interface, which kicks off by asking how you’d like your disks served up. You can opt for two separate drives, a single linear drive, a RAID-0 stripe or a RAID-1 mirror. Either way, you make your play, select your file format and the appliance sets them up and formats them ready for use.


As with the DSM-G600, the appliance only supports the EXT2/3 file systems and not FAT32 or NTFS. We opted for a RAID-0 stripe and EXT2 for the best performance and the appliance took around six minutes to create the array. 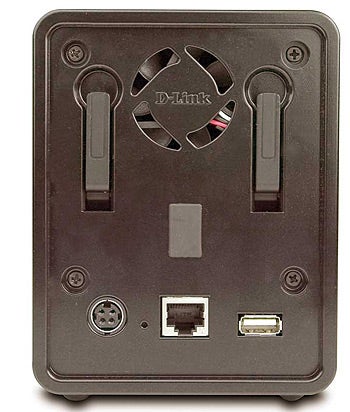 Once the appliance has rebooted, the web interface offers a quick start wizard for setting the administrative password, time zone and workgroup details. The web interface is nicely designed, but despite a graphical refresh it’s clear that the DNS-323 is running virtually the same firmware as the DSM-G600 with just a few enhancements.


A feature becoming more common on consumer NAS appliances is the ability to function as an iTunes server, and this is one of the enhancements added to this firmware. The server is enabled by default, and you can select a location on the appliance where you want to import your music. With the iTunes client loaded up, the server automatically appears in the source side bar with all your downloaded tracks ready for playback. The appliance also offers UPnP media services for streaming to suitable media players.

Access to network shares is controlled with a list of local users and groups, the security of which is sufficient for home use. The ability to assign usage quotas is a new feature, and this allows you to limit the amount of storage space available on a user and group basis. FTP services are on the cards as well, and restrictions can be applied to folders declared for FTP access. You can also restrict the number of users that can access a folder simultaneously and limit the amount of bandwidth available to each FTP folder.


The Nero backup software supplied with the DSM-G600 has been booted out and replaced with a single user copy of Memeo AutoBackup. This is far more sophisticated product, as it supports a wide range of backup destinations, offers optional backup encryption and after the first scheduled backup has run will only secure file changes or new files, making for speedy operation. The appliance also provides an unusual backup feature in allowing you to select files and folders on other systems which can be downloaded to a location on the appliance over HTTP or FTP. This is accessed from a separate administrative interface where you provide login details, the URL of the source, a location on the appliance to copy the files to and a recurring schedule – great for website administrators.


We had no problems securing files from an Iomega NAS appliance over FTP although, as we observed with the DSM-G600, the status screen for each job shows the passwords for each login account in plain text – not exactly security conscious. 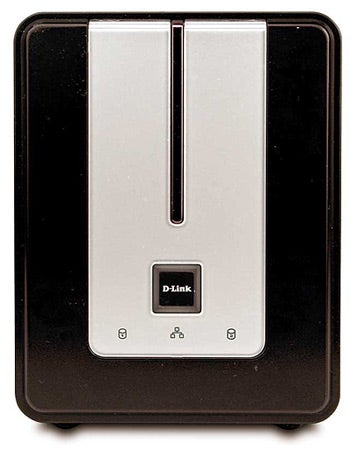 General performance for a RAID-0 stripe was on a par with D-Link’s quoted figures of 23MB/sec read and 15MB/sec write speeds. We tested real world performance by copying a 691MB video file from a Supermicro 3.2GHz Pentium D PC to the appliance which took 45 seconds, for average write speed of 15MB/sec. Copying the file back to the PC returned an average read speed of 21MB/sec. Usefully, you can power the drives down after so many minutes of idle time, allowing you to do your bit for saving the world as well as saving your data.


For such a compact NAS appliance, the DNS-323 offers a good set of storage features at a reasonable price, although we still would have liked to have seen greater USB functionality. The closest competitor to this device is the Thecus YES Box N2100, as it offers a very similar set of features including the iTunes server. However, the Thecus is not as well constructed and will also set you back around £50 more.


All in all, the D-Link is a solid, if unspectacular, choice. 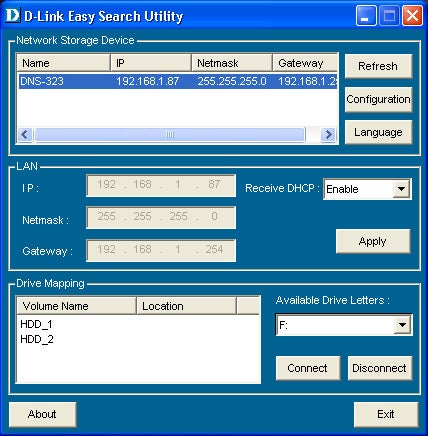 The Easy Search utility helps track down appliances and can set up mapped drives for you. 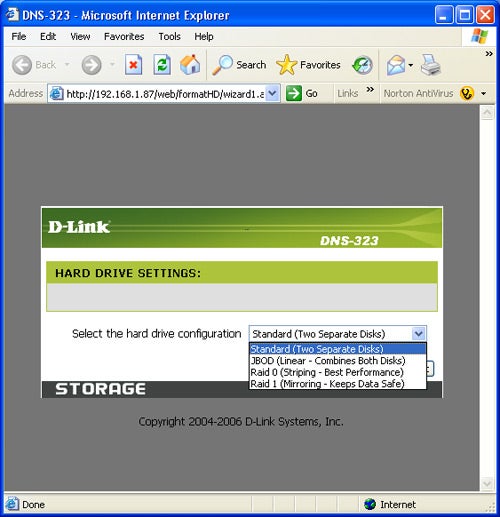 With a pair of drives fitted, there are plenty of configuration choices on offer. 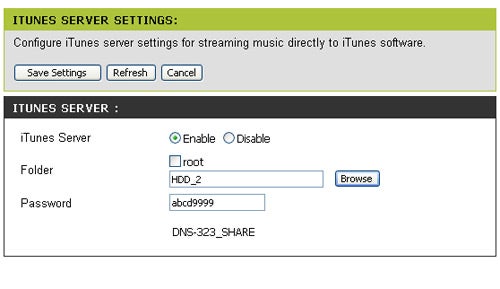 Unlike the DSM-G600, this box provides a very useful iTunes server function. 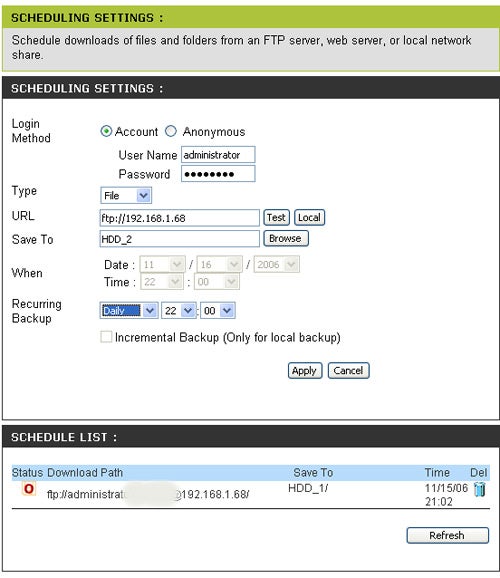 You can select remote files and folders and back them up to the appliance over HTTP and FTP. 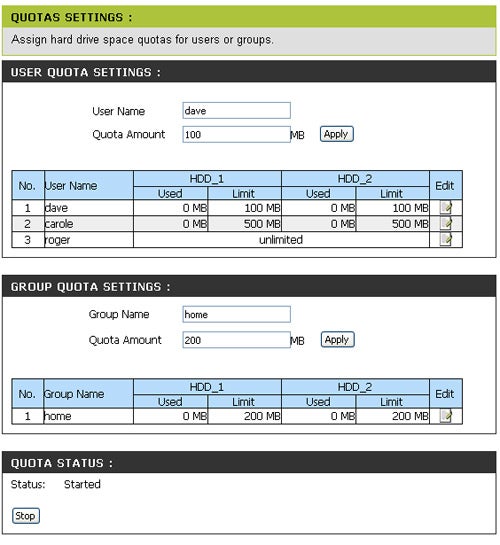 Stop greedy users by applying quotas as the user or group level.