D-Link’s latest desktop NAS appliance aims to offer home users a simple solution for sharing files over the network and Internet. The DNS-313 certainly won’t take up much desktop real estate as this single drive appliance is remarkably compact and yet offers both USB 2.0 and Gigabit Ethernet connection options. You won’t be able to use them at the same time as the interfaces at the rear have a small sliding cover over them that only allows one of them to be accessible.


The DNS-313 adheres to the same design philosophy as the dual drive DNS-323 as its chassis is a sleek matt-black aluminium affair that feels well built. It’s supplied diskless so you can pick your own SATA drive and D-Link is promoting it as capable of supporting the latest high capacity 1TB models. Drive installation is a simple process as you slip the front cover off, slide the drive in where it mates with the combined power and SATA interface at the back and pop the cover back on. 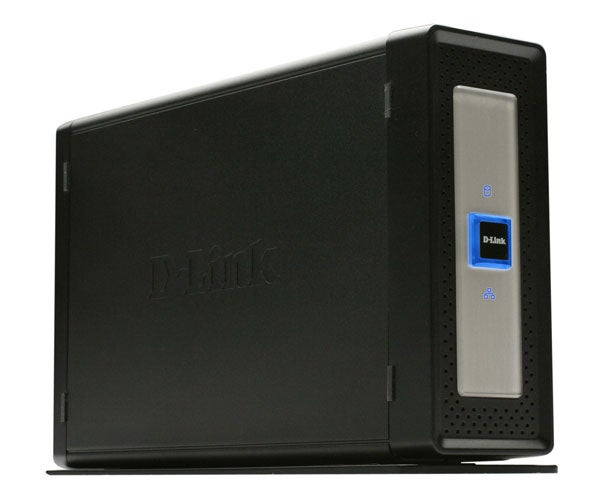 Installation is handled by the bundled Click’n Connect utility, which locates the appliance on the network, formats the drive for you, restarts the appliance and then maps the default volume to a local drive letter. Well that’s the theory, but we came up against a few compatibility issues. Our first choice was a 250GB Western Digital WD2500KS drive, which the unit refused to acknowledge – we could hear it power up but the drive LED on the front panel wouldn’t light up and power button just flashed continuously. We then tried an older 200GB Maxtor DiamondMax Plus 9, which the utility identified and formatted but the unit hung after restarting. We met with more success with a Western Digital 74GB WD740GD and a 150GB WD1500ADFD both of which worked without any problems. Seeing as D-Link is promoting the DNS-313 as a 1TB appliance we couldn’t pass up the opportunity and installed the latest 1TB Hitachi UltraStar SATA drive which, to our relief, was accepted without any complaints.


The appliance’s browser interface offers you two choices, the second of which is D-Link’s Schedule Downloads feature. This is similar to the tool provided with Synology’s Cube Station CS-407e’s Download Service, which enables files and folders on FTP or HTTP servers to be downloaded to the appliance – note that BitTorrent isn’t supported. Provide login details, the URL of the source, a location on the appliance to copy the files to and a recurring schedule and the appliance manages the process in the background. We found this easy enough to use and were able to schedule downloads from our FTP and HTTP servers without any problems.

The administrative interface opens with a quick start wizard, where you can set the administrative password, time zone, network and workgroup details. Access controls are fairly basic as you can create a list of local users and groups and decide which folders they are allowed to use. Read and write privileges can be determined for each one but quotas are not supported so you can’t limit the amount of storage space each one can use. FTP services are above average as you can publish multiple folders and apply user and group restrictions to each one. For each folder you can limit the number of users that can access it simultaneously and apply bandwidth restrictions for each folder as well. 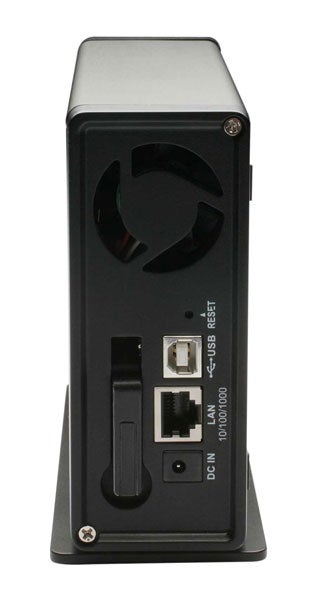 D-Link goes with the flow for media streaming as the appliance incorporates the ever popular iTunes server. You can select the folder you want your music files to be published from and apply a password restriction. The appliance also offers UPnP media services for streaming to suitable media players. For such a small appliance heat dissipation will be an issue but we found the status display in the browser interface showed it never going over 49ºC. The chassis has a small fan at the rear that’s linked to a thermal sensor. This was quite intrusive as it came on every ten or fifteen minutes and would run for up to five minutes at a time. Usefully, you can power the drives down after so many minutes of idle time.


Performance for the DNS-313 is quite reasonable and certainly above average for a low cost single drive appliance. Using a Supermicro Pentium D 3.2GHz PC we copied a 690MB video file over Gigabit Ethernet and saw read and write speeds of around 19MB/sec and 8MB/sec respectively. FTP performance isn’t so good as uploading and downloading the same file using the FileZilla utility returned only 7.1MB/sec read and 6.4MB/sec write speeds. For general workstation backup you get a single user copy of Memeo AutoBackup. This is a useful tool that supports a good range of backup destinations including the appliance and once a full backup has run it uses a background service that monitors changes and new files in the source directories and secures them in real time.


D-Link delivers a low cost NAS appliance with a fair turn of speed and a reasonable set of features although we do have concerns over compatibility issues with some SATA hard disks.

(centre)The Schedule Download tool allows files to be copied from FTP and HTTP servers in the background.