This is made even more difficult due to the presence of two bands on the DIR-890L – which, theoretically, should demand two devices to be straining it at the same time (or arguably three, with one on the 2.4GHz band). However, then you’d be maxing out the Ethernet connections that are feeding data into the router, causing yet another issue.

All in all, it certainly isn’t a trivial task to set up a real-world, quantifiable testing scenario.

As such, we’ve stuck to our standard router test, which investigates the router’s effectiveness at a variety of ranges over both the 2.4GHz and 5GHz bands.

A PC is set up with the Asus PCE-AC68 Wi-Fi card and placed adjacent to the router, then at 5m away with two brick walls in between, and finally at a distance of 10m away with a further wall in between. Maximum throughput is measured using a real-world file transfer at each of these distances. 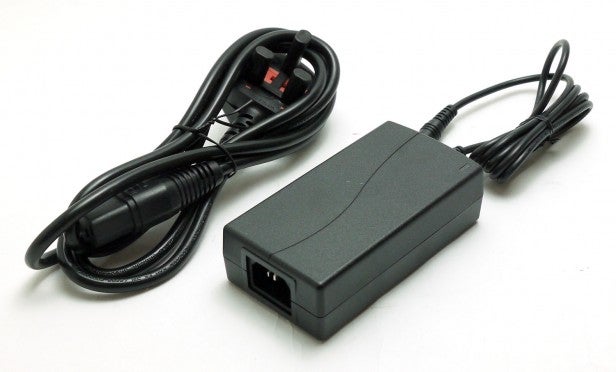 The router was installed for a week to test its general reliability, to ensure the Wi-Fi signal remains consistent and that the unit doesn’t crash or loose connection. This reliability test is particularly important, since we’ve discovered that some routers – such as the Netgear Nighthawk range, for example – are fast in test conditions but are unreliable in day-to-day use.

Thankfully, the D-Link DIR-890L passed with flying colours on the latter point, proving rock-solid throughout. 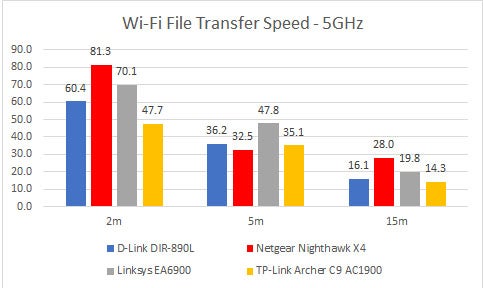 For speed, the DIR-890L was less impressive. While it largely delivered the sort of speeds and range you’d expect of a high-end router, it couldn’t match the best on either account.

This trend continued throughout our tests, with the DIR-890L delivering 36.2MB/sec at 5m, which compares to 47.8MB/sec for the Linksys. It did actually beat the Netgear here, which achieved only 32.5MB/sec. 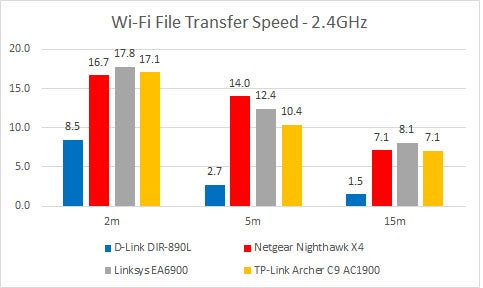 At 15m, though, the D-Link trailed both again, hitting 16.1MB/sec at its peak, compared to 28.0MB/sec for the Netgear and 19.8MB/sec for the Linksys. It only beat the TP-Link Archer C9 at 5GHz consistently.

However, at 2.4GHz it came last, trailing all our other AC1900+ routers by huge margins. What’s more, there was often a noticeable delay before a file transfer started when using both the 2.4GHz and 5GHz bands at long range. Sometimes it took as long as 20 seconds before the transfer began.

There’s a degree of environmental variance here – the D-Link was tested on a day when it was pouring with rain – but this still shouldn’t account for such a huge drop.

Thankfully, the speeds are still perfectly usable for most day-to-day tasks. Moreover, when it comes to file-transfer speeds to attached USB devices, the DIR-890L does very well indeed, hitting 35.5MB/sec write and 65.2MB/sec read.

The case for AC1900 routers and above was already weak for most home users, due to the lack of devices that support its high speeds. As such, AC3200 models such as the DIR-890L are even more of a niche product.

If you’re simply looking for a quality router to provide a reliable connection throughout a large home then you can get that for far less money. Moreover, really large homes/offices will be better off laying down some Ethernet cable or employing Powerline adapters to bridge some of the gaps.

That said, the DIR-890L is worth considering for those households that really do have a number of devices regularly hitting the Wi-Fi hard. It offers good range, it’s fast and super-reliable. And if you have a PC equipped with an AC1900 adapter, then you can also make use of its fast 5GHz transfer speeds.

However, putting aside its somewhat niche appeal, there’s the fact that it isn’t the fastest in its class and its interface suffers a few issues. Although these are largely academic grumbles, they certainly affect the DIR-890L’s score in our review.

On the whole, the D-Link DIR-890L is an excellent router that provides a fast, far-ranging and reliable Wi-Fi connection alongside plenty of extra features. However, since it’s a niche, high-end product, it will be the best choice for only a select few.