What is the Cyrus ONE?

With its jazzy styling, relatively affordable price tag and a bang-on-trend feature list, the Cyrus ONE is a compact stereo amplifier aimed squarely at the younger generation of music listeners.

Bluetooth aptX and a built-in phono stage will satisfy streamers and vinyl lovers alike, while a high-quality headphone amp delivers a sophisticated silent disco experience. For extra streaming versatility and multiroom capability, the Cyrus ONE also now comes with a Google Chromecast Audio, a cable to connect it, and a three-month TIDAL subscription.

It’s powered by the British brand’s third-generation hybrid Class D amplifier and promises to uphold the company’s renowned sound quality, despite being the most affordable stereo amp in the range.

Cyrus ONE – Design and Connections

Inspired by the original Cyrus 1 launched in 1984, the ONE retains the compact footprint of previous Cyrus amps, but livens things up with a lustrous gloss-black faceplate. Its sleek styling and minimal clutter take the normally hi-fi brand deep into lifestyle territory – but it works.

Two huge knobs on the front – one for input selection, one for volume – sport a lovely rubberised finish and turn with a smooth action. There’s no display panel, but I didn’t miss it – a ring of white LEDs around each knob clearly indicates the selected input and volume level, and do a little dance when you first power it up. They’re bright out the box, but can be dimmed using the remote.

Below the fascia are a 6.3mm headphones output and a chunky power button.

Any fears that Cyrus has dumbed down build quality in courting the younger vote are allayed by the beefy bodywork. From the unyielding top cover to the solid chassis, it’s industrial-grade stuff. The rack-friendly 220mm width is a bonus, but it does seem disproportionately deep.

On the back are four line-level RCA inputs, one of which is an AV bypass connection that lets you use One with your existing home cinema system, plus an earthed input for the moving magnet phono stage and stereo pre-out to feed an external power amplifier.

There’s a Micro USB port for firmware updates and bi-wire/banana plug-compatible binding posts. The absence of digital inputs and a USB DAC is a little disappointing, but it’s partially made up for by the inclusion of a Chromecast Audio and accompanying 3.5mm-to-phono cable.

There’s a high-voltage Class AB headphone amp on board too, which is automatically activated when you plug in your headphones – the main toroidal supply switches all its power to the headphone circuits and the volume is reduced to zero. 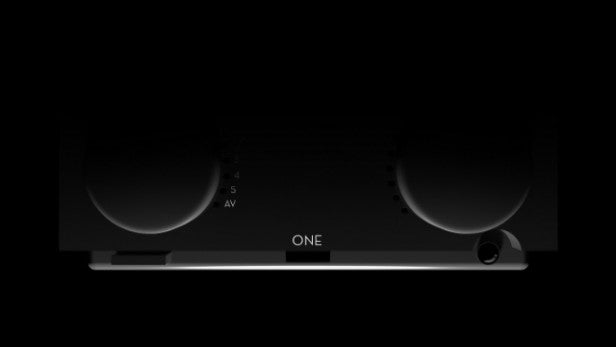 Cyrus says the ONE is powerful enough to drive any loudspeaker, regardless of size. A clever Speaker Impedance Detection (SID) automatically matches the amp’s output response to the speakers’ electrical load.

Through clever circuit design and the use of digital amplification, Cyrus has eliminated the need for heatsinks, preventing the components from being exposed to detrimental heat extremes.

Bluetooth aptX provides high-quality music streaming from mobile devices, while the addition of the bundled Chromecast Audio is welcome. In time you could also step up to one of Cyrus’ dedicated streaming components, such as the Stream X Signature or Stream XP2.

Setup is a cinch, but ONE lets itself down with a horrible blister button remote that doesn’t live up to the quality of the main unit. It’s small and awkward to hold, plus the buttons need to be pressed hard. There are volume, balance and dimmer controls, plus a button for each input – annoyingly, there are no Bluetooth controls.

Thankfully, Cyrus has recently launched a smartphone app that’s much more enjoyable to use. You’ll need to update the unit’s firmware via USB (available from www.cyrusaudio.com) to use it, which also gets rid of an audible test impulse when turning the unit on. 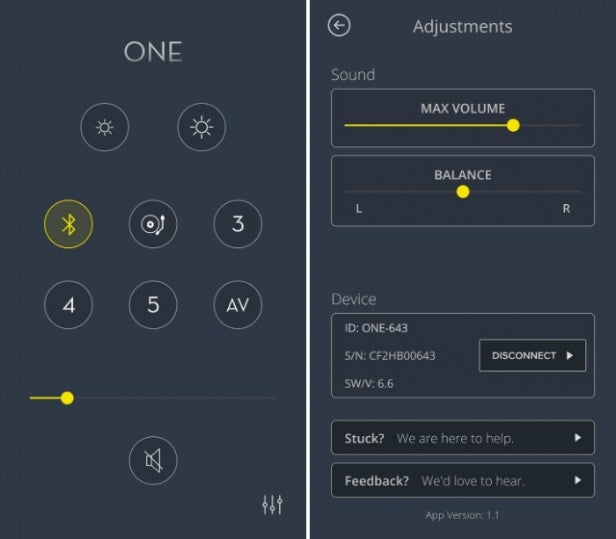 The homepage layout is clear and spacious, with six buttons representing the inputs, alongside dimmer and volume controls. Tap the equaliser symbol at the bottom and you can set a maximum volume or adjust the balance. Spread over just two pages, it’s very simple but well designed, and much better than the physical zapper.

Even at this lower price point, ONE shows its serious audiophile intentions. It’s a powerful, articulate system, handling music with the sort of transparency and insight you expect from a brand such as Cyrus.

Hooked up to a CD player, there’s plenty of punch and weight to the kicks and basslines when you throw a beat-driven dance tune its way. Bass is tighter than Carol Vorderman’s Botox, refusing to boom or flap as you send the volume north.

Its sound is big and solid, with a cohesive balance across the frequencies. It fills a room without really trying, and nonchalantly belts out the most rousing anthems with terrific composure.

The ONE also demonstrates plenty of rhythmic flair and attack. Streamed via Bluetooth, the Dilla-like drums in Tom Misch’s “Wake Up This Day” really snap, while the live snares powering Incognito’s “Say Nothing” sound full and vigorous, making it virtually impossible to keep your head still.

But perhaps the ONE’s greatest asset is its lucid high-frequency reproduction. It communicates textures and subtleties brilliantly, like the twang of guitar strings or breath on a saxophone mouthpiece. Such transparency makes music seem all the more realistic and natural.

“Back To Your Heart” by Lindsey Webster is absolutely teeming with detail, from the reverb tail on the snare drums to ticking hi-hats hovering over the song. The Cyrus coaxes out the breathy, sultry Sade-like quality of Webster’s voice too.

The mid-range is full of body and texture, so you can feel the emotion as Lianne La Havas sings “Good Goodbye”. More forceful elements such as synth stabs and electric guitar riffs don’t strain or harden up either, and Rhodes chords sound rich.

I can’t fault the ONE’s imaging either – the way effects and percussion pass clearly between the speakers is delightful, while the overall soundstage is open and spacious.

The ONE continues the great work with a turntable connected to the phono stage. There’s even more richness and body in the mid-range but with similarly eloquent high frequencies and metronomic sense of rhythm.

Should I buy the Cyrus ONE?

With the addition of a Chromecast Audio, the ONE finally gets a lot closer to being the all-singing, all-dancing audio hub its name suggests, easily justifying its price tag. It looks stylish, build quality is superb inside and out, and it sounds fantastic.

It’s the sonic equivalent of sinking into a leather armchair with a glass of fine single malt – sheer luxury. Its sound is transparent and insightful, with bags of power and punch. Big dynamics aren’t a problem when the song demands it, and there’s impressive poise when you crank up the volume.

The only chink in the armour is the cheap remote. As your day-to-day point of contact with the product, it’s more important than you might think – and this one makes operation cumbersome. Thankfully, the smartphone app offers a superior alternative for the tech-savvy.

Cyrus courts the younger vote with a swanky compact amp that delivers stunning sonics at an affordable price, and even throws in a Chromecast Audio and Bluetooth for extra streaming smarts.