What is the Bookeen Cybook Ocean?

The Cybook Ocean is probably the largest widely available ebook reader available at present. Once upon a time it looked like we were on a fast track to real next-gen ereaders. Colour ones? Flexible ones? Sure.

However, the pace of upgrades has really slowed, and the Kindle Voyage looks and feels a fair bit like the older Kindle Paperwhite. Still, Bookeen is at least having a go at creating something a little different.

The Cybook Ocean is massive among ereaders, its 8-inch screen dwarfing that of rival Kindles and Kobos, which rarely stray much above six inches.

While it’s refreshing to see something different, the limited screen tech, sharp-edged design and laggy performance mean it’s not worth considering over one of the more conventional options for most people. Especially when it costs £150, making the Cybook Ocean one of the more expensive ereaders. 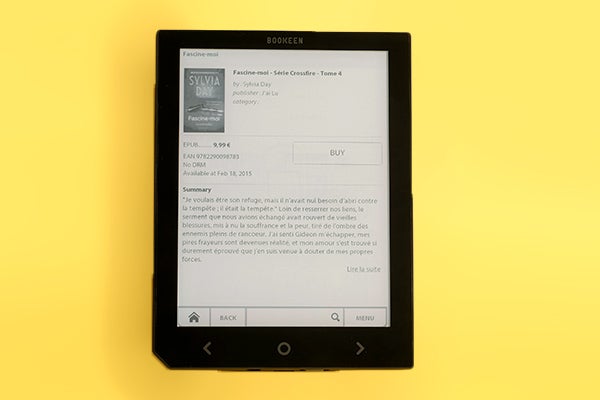 From a distance, the Cybook Ocean looks pretty impressive. The screen is completely flat with no raised bezel, the design is moody and the sheer size makes it appear anything but an also-ran.

However, get the thing in your hand and the problems starts arising. 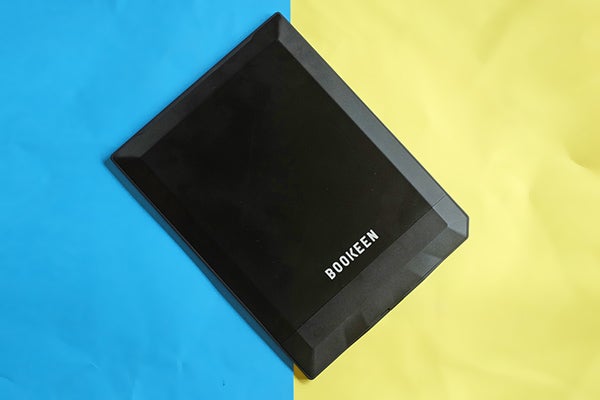 The Cybook Ocean is just not that comfortable to hold. Its edges are far too severe, lacking the smooth bevelling used in just about every other ereader. These edges are sharp. The left edge may be sawn-off, but even that is a little too severe — and our natural inclination (being right-handed) was to hold it in the right mitt anyway.

A sharp profile may fit in with its aluminium construction style, but the sides aren’t actually made of metal. The Cybook Ocean’s back is a plate of aluminium, while the sides are plainer plastic. 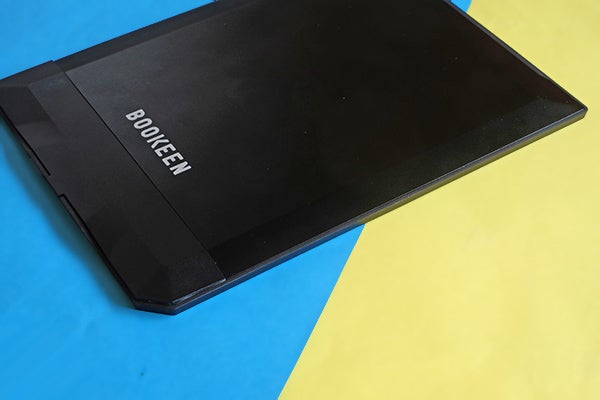 Plastic readers are fine, but this design gets the Ocean neither the comfort of soft plastic nor the striking first impression of an all-metal reader. It certainly is slim, though. At just 7mm thick, you’ll be able to stash it in a bag without it taking up too much space.

We can’t help but wish Bookeen had stopped aiming for superlatives and focused a little more on what the Cybook Ocean is actually like to use, though. The back flap is another example of this. 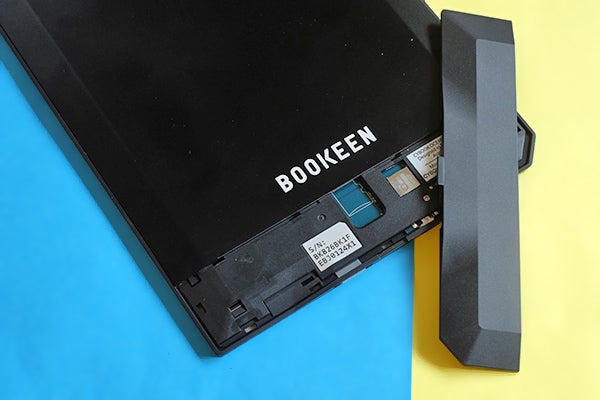 The very bottom part of the Cybook Ocean’s back is not part of the aluminium rear but a plastic flap that you can remove to reveal the microSD card slot. However, the thing is so stiff it feels like you’re going to rip the ereader in two just prising it off. As something you’ll likely to just a few times, ever, it’s not a huge issue: more indicative of a slightly wonky design methodology. The Cybook Ocean looks pretty good, just doesn’t feel quite right.

All of this might melt into the background if the screen is perfect for your needs, though. It’s an 8-inch display, giving it the dimensions of a hardback novel, compared to the small paperback style of the Kindle crowd.

Why would you want such a large screen? In a word, presbyopia. This is the gradual loss of near-vision focusing that comes to us all after the age of 40 or so, and is the primary reason for bifocal glasses. 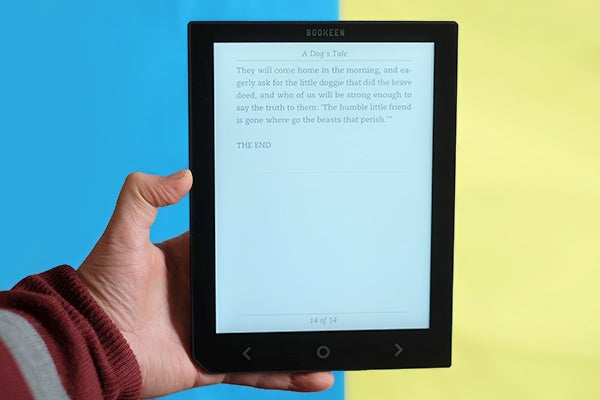 It’s a simple equation. The larger screen lets you hold the Cybook Ocean further away, letting you keep text looking large without fitting just half a sentence on-screen.

The Cybook Ocean has a front light too. Like other lit ereaders, it uses side-firing LEDs whose light is passed through a guide layer that distributes the glow across the screen. Reading in bed, in the dark, is no issue, although the light does have a very clear blue tone. Most rivals have moved on to a more neutral hue at this point. It’s also nowhere near as bright as the Kindle Voyage light (not that we suffered in normal use, it’s generally bright enough). 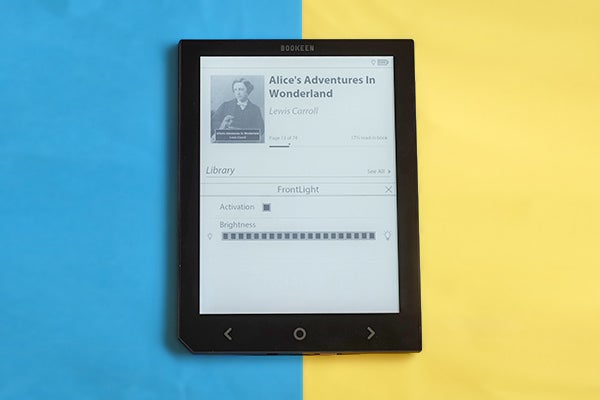 This size benefit alone may be enough to justify the Cybook Ocean for some buyers, but other than that we don’t rate the display all that highly. You see, it’s actually quite different from other ereaders.

Kindles, Kobos and other Bookeen ereaders use E Ink displays, whose images are constructed using reams of little white and black microcapsules. The Cybook Ocean, however, has an E-Paper screen. Sounds similar, looks similar. But isn’t. 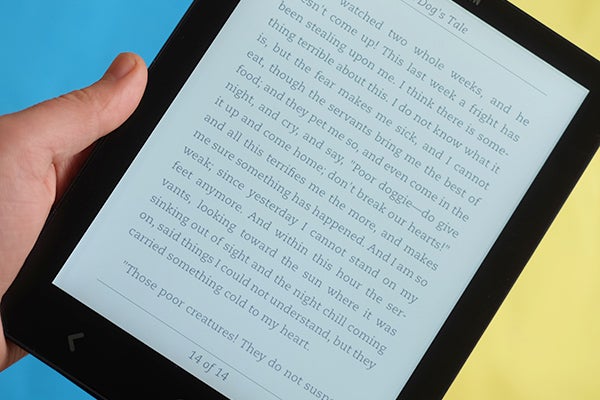 This is actually a form of LCD screen, a bit like the a calculator screen, called E-Paper. You get the same power efficiency benefits of E Ink, meaning the Cybook Ocean lasts for around a month off a charge. However, it just doesn’t look as good as an E Ink screen of the last few generations.

The blacks aren’t as black, the whites not as white, and there’s slightly more noise to the white background of the page. 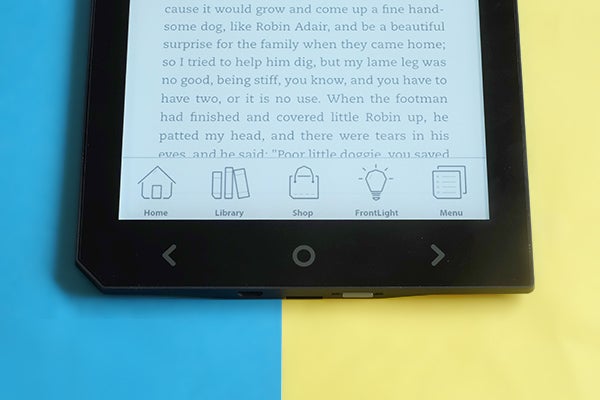 It’s simply not as nice-looking as most £100-plus ereaders. And there’s no resolution benefit for those who don’t value sheer size as the top priority. The Cybook Ocean has a 1,024 x 768 pixel display, the same as the mid-tier Kindle Paperwhite.

If you’re going to hold the ereader at arm’s length, this is no issue, but don’t buy the Ocean thinking you’ll be able to look at dense PDFs of technical drawings close-up and have them appear super-sharp. Everything starts looking a little soft at close quarters.

The finish is potentially problematic too. While there’s a strong anti-reflective layer, the Cybook Ocean is still far glossier than most of the competition. Reflections can pose a problem.

A certain lack of finishing touches in the hardware continues in the Cybook Ocean’s software. The basic UI layout is similar to what you get with the better-known brands, putting the books you’re currently reading up-front, along with an easy link to the Bookeen book store. It’s practical.

However, each element looks as if it hasn’t quite been finished. There are images that haven’t been scaled properly for their size, naff-looking italic fonts and there seems to have been no optimisation for the larger screen size. It’s all a bit… student design project for our liking. 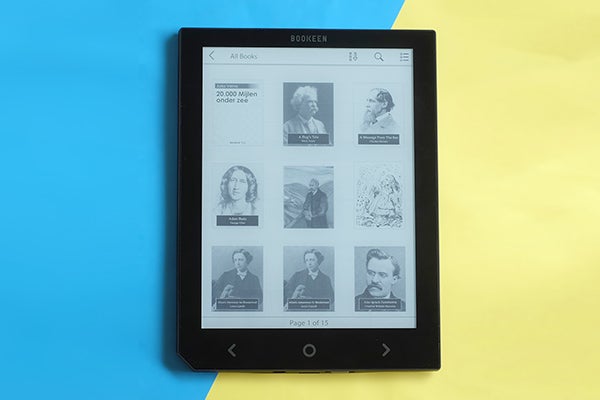 Yes, the Cybook Ocean will remember your details so you don’t have to input them every time, but if you’ve used a Kindle before it’ll all seem rather amateur hour. Coming from a French company, much of the store’s contents are geared to the French audience too (and prices are in Euros). 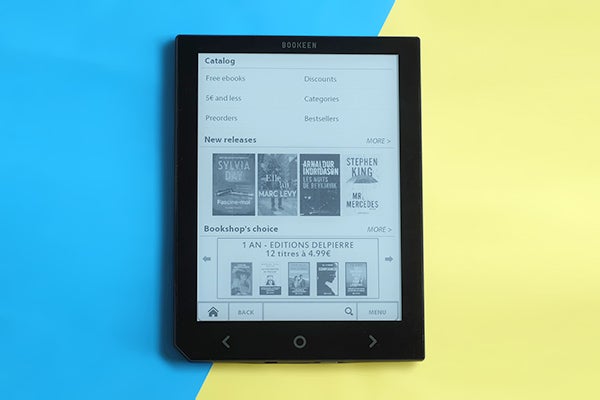 The Cybook Ocean suffers from fairly poor performance too, despite having a mostly-respectable Cortex A8 TI OMAP3611, an 800MHz chip. Every action seems to have about 50 per cent longer than a Kindle (including the £59 model) or Kobo Aura HD.

There seems to be very little software optimisation going on here. Even entering text into a search box is clunky: you first enter it into the keyboard’s module, then hit ‘enter’ to get it to appear in the box, meaning you have to hit another button to actually input the term. There’s an extra step here that we have little patience for in 2015.

If considering the Cybook Ocean as an alternative to a Kindle you should also take into account the services missing here. There are no newspaper subscriptions, no integrated book lending, and nothing like Amazon’s Unlimited, which is a book/audiobook take on Netflix. You can, however, transfer your own books over to the 4GB internal memory using the microUSB cable. 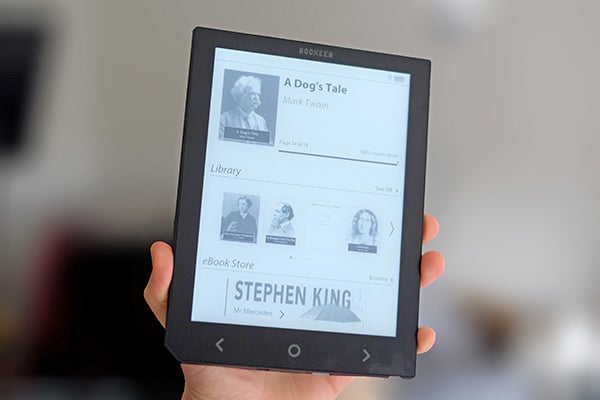 Should I buy the Cybook Ocean?

As an ereader that breaks away from the 6-inch blueprint used by virtually every other model out there, we wanted to like the Cybook Ocean. Even while we think not everyone has a particularly good use for a larger ereader, that large font editions of books exist tells you there is a market out there.

However, we just wish Bookeen had done the job a bit better. There are too many elements where the Cybook Ocean falls way behind the more conventional competition.

It’s not comfortable enough, the screen isn’t as good, the software lacks the gloss of the others and it’s flat-out slow by today’s standards. We’ve watched with some sadness as other ereader players like Sony have dropped out of the market. But with entries like this, we’re not entirely sure why Bookeen is still in the running.

With an 8-inch screen the Cybook Ocean is something different among ereaders. But too many elements lag behind cheaper, smaller rivals.