The 15.6in panel isn’t a touchscreen, and it doesn’t mess about with ridiculous resolutions – this is a 1080p panel with a matte finish that won’t be hampered by bright lights.

That bodes well for gaming. There’s no need for the GPU to struggle as it pushes more pixels to a needlessly high resolution; 1080p is amply sharp enough for a 15.6in screen. The resolution matches both rivals – I’m pleased to see the trend for 4K laptop panels is drifting away.

The Fangbook’s brightness level is immediately disarming. Its 315-nit backlight is stronger than both rivals, and it means that there’s enough brightness to make even the dingiest games look punchy.

The black level of 0.32 nits is good, too – the same as the Alienware and barely different from the MSI – and the contrast ratio of 984:1 is reasonable. It’s a little behind the MSI, but it’s still enough to give decent definition between shades.

That’s a good start, but the Fangbook’s colour results see it falter. Its colour temperature of 7,142K makes it cooler than the MSI, and its Delta E of 3.59 is behind both competitors. Its sRGB coverage level of 85.4% falls between other machines, and its uniformity was consistently good – so there won’t be any noticeable variation in different areas of the screen. 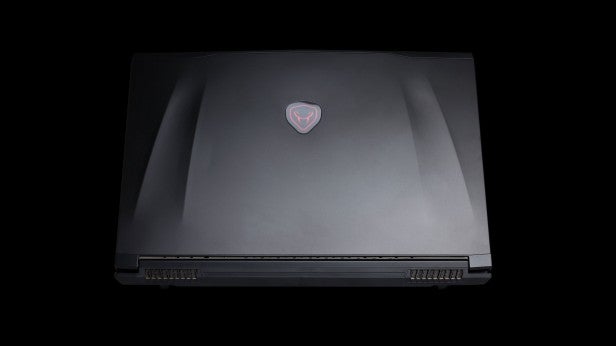 Those figures aren’t enough to make games seem off-colour, but it does mean that the Fangbook’s panel can’t quite match the MSI .While the CyberPower machine is brighter, the MSI has better contrast, colour accuracy and temperature.

The screen can hold its own against most gaming notebooks, though, but the audio kit is more disappointing – despite the small subwoofer and quartet of speakers included on the inside. That subwoofer, for instance, doesn’t result in good clarity at the low end: there’s barely any bass present no matter the content being played or its volume.

That leaves aural responsibility to the mid-range and high-end, but neither department proved capable. The high-end is tinny, weak and lacks clarity, and the mid-range is only mediocre. Both of those areas suffer from a severe lack of depth, which means that music and games sound narrow and underwhelming – there’s no detail to be found here, with sounds difficult to discern when they’re squashed together. The speakers handle quieter moments with aplomb, however, but that’s no good for gamers – I’d immediately reach for a pair of headphones.

There’s an awful lot to like about the Fangbook’s keyboard. The buttons are large, Scrabble-tile units with LEDs that glow through clear plastic beneath black surfaces. The typing action is excellent: the buttons press down with speed and consistency, and the action isn’t too harsh – there’s a softness that makes the keys suitable for high-octane gaming and more sedate typing.

It’s no surprise that the Fangbook has good typing quality. No logos indicate this, but the keyboard comes from peripheral specialist SteelSeries. That means the Fangbook matches the MSI GS60, key for key. It also provides keen competition for the Alienware, which has a traditional keyboard with a clickier, more rigid action. 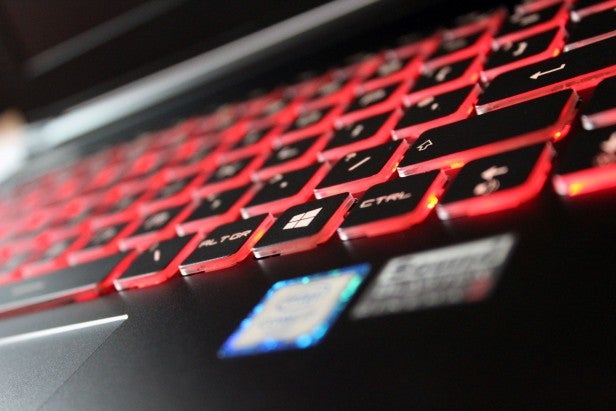 An app is included to alter the keyboard’s backlight. As usual, there are options to alter the colour and to change the pattern used: the Fangbook’s keyboard can glow, pulse or change colours with a wave. Thankfully, it’s also possible to turn the colours off.

I’ve have only a few layout quibbles: the single-height return key is awkward, the Windows key is on the right-hand side, and the cursor keys aren’t set apart from the rest of buttons. Time, though, will see users get accustomed to those changes.

The trackpad is a mixed bag. The surface is large, smooth and responsive, and the two physical buttons are good – fast and light. Gesture support is lacking, though, which will irritate those who are used to a MacBook or most other Windows machines.
Related: The Greatest Gaming Mice