The Fangbook SX6-300 doesn’t come from a familiar gaming laptop name, but it does come from a firm with huge high-end experience. CyberPower is best known for its gaming PCs, and it’s won dozens of awards for its pixel-pushing behemoths.

This laptop is a 15.6in machine with plenty of power on offer: it has a formidable Intel Skylake chip and one of Nvidia’s best mobile GPUs, alongside an SSD and 16GB of memory.

This machine has a snazzy Fangbook logo on the lid and, elsewhere, it bears many of the familiar hallmarks of gaming portables. There are angled sections, a tough-looking logo above the keyboard, and a Scrabble-tile keyboard that glows with dozens of LEDs. The whole machine is clad in brushed aluminium.

It’s no surprise that the Fangbook looks similar to MSI’s range of gaming machines – MSI actually made this laptop before CyberPower changed the name and specification. It’s a smart-looking unit, but it doesn’t have the visual flair of the Alienware 15: that machine has more angles, more vents and more lights. 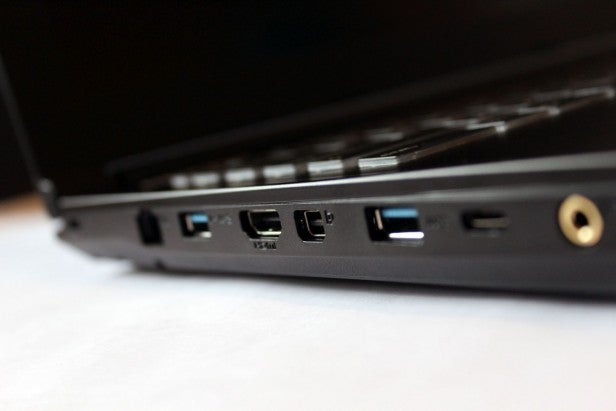 Although the Fangbook could easily handle being lugged around in a bag without the need for a case or sleeve, there are a couple of build quality niggles to bear in mind. There’s some give in the metal on the lid, and the right-hand side of the wrist-rest also flexes a tad. It’s on a par with the MSI GS60 2QE Ghost Pro, but the Alienware is sturdier.

There’s one area where the Fangbook does trump the Alienware – in its dimensions. The CyberPower machine’s 26mm width easily undercuts the 34mm Alienware, and its 2.4kg weight is reasonable too: more than half a kilo lighter than Dell’s laptop.

The MSI is thinner and lighter still, though, with a 2kg body that’s 20mm thick at its chunkiest point. 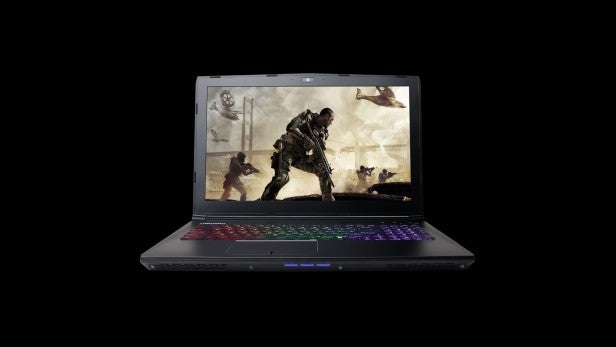 There’s no disputing the high-end hardware inside the SX6-300. The Core i7-6700HQ is the most modest part from Intel’s latest high-end mobile range, but don’t question its abilities: it has the new Skylake architecture, four Hyper-Threaded cores, and its 2.6GHz stock speed can use Turbo Boost to peak at 3.5GHz.

The storage array is decent, too. Windows 10 is installed to a 120GB Kingston M.2 drive, and it’s backed up by a 1TB hard disk that’s easily large enough for a good games collection. Elsewhere, there’s 16GB of 2,133MHz DDR4 memory.

Connectivity is good thanks to dual-band 802.11ac wireless and Bluetooth 4.0, and Gigabit Ethernet comes from Killer – which means traffic is prioritised for games. The Fangbook matches most other gaming notebooks in this department. The selection of ports is decent: two USB 3 connectors and a USB 3.1 Type-C port, an SD card slot, HDMI and DisplayPort outputs and a DVD writer. 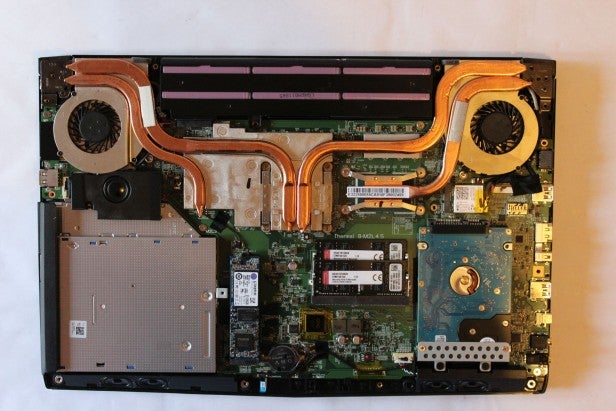 Its rivals are equipped with similarly impressive hardware. The MSI has the same processor and graphics core and falls behind only with 8GB of memory. The latest Alienware machines are kitted out with the same Core i7-6700HQ processor, and pricier models are available with the GTX 970M. Note that even lesser machines still boast GTX 965M graphics.

If the hardware inside this sample doesn’t suit, then the Fangbook is available in several other configurations. The SX6-100 costs £919 and includes the same Core i7 processor alongside a GTX 960M graphics core and a 500GB hard disk, and the £989 SX6-200 includes a 120GB SSD and GTX 960M graphics.

Customisation is possible, too. CyberPower can drop the machine down to 4GB or 8GB of memory, switch up the storage, or bring the GPU down to a GTX 960M to save cash – or, if there’s more money in the budget, further SSDs can be added.

The Fangbook’s internals are accessible, but it’s tricky to get inside. It’s held in place by more than a dozen screws, and requires some elbow-grease to yank the panel from the main body of the machine.

Once inside, though, things are more simple. The two memory slots, M.2 SSD and hard disk can all be unscrewed, and the battery is swappable too – although only once the base panel is removed. The cooling gear and optical drive can also be unscrewed, which is handy for swapping parts and cleaning.