The CyberPower’s 17.3-inch screen is a Full HD, 1920×1080 IPS panel. That’s sensible, and it matches both competitors. The pixel count means games will look sharp enough, but it’s not high enough to prove taxing on the graphics core. This choice definitely keeps the price down, but it makes the use of a desktop GPU seem slightly puzzling; if you want to make the most of the GTX 980, you’ll want to hook it up to a higher-resolution external monitor and play your games on that instead.

The CyberPower is only second gaming laptop I’ve seen with G-Sync, and it’s a welcome addition to any high-end gaming notebook. This technology synchronises the frame rate of the graphics card with the refresh rate of the screen, which eliminates screen-tearing and other screen errors.

It’s designed to make gaming far smoother, and it works perfectly on the Fangbook. I used Nvidia’s Pendulum demo, and there’s a clear gulf between normal screen functionality and the panel’s butter-smooth output with G-Sync activated. It’s the sort of thing that sounds superfluous right up until the moment you switch back to a machine without it; it’s a definite boon.
Image quality is reasonable in most departments, too. The Fangbook’s brightness level of 324nits is excellent, and more than enough to cope with bright lights at LAN events, and the black level of 0.29 is pretty good – dark enough to provide enough depth for inky-looking blacks and atmospheric games. Those figures combine for a contrast ratio of 1117:1, which is excellent: a wide enough range to provide punchy colours across the gamut, from lighter tones to deeper areas. 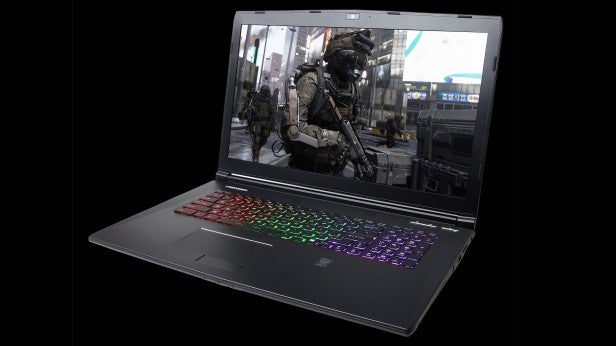 The Fangbook’s average Delta E of 3.18 is decent, and the screen’s backlight is consistent across the panel, never dropping more than 6% of its brightness even at its most extreme corners.

The only issue with the CyberPower’s screen is its colour temperature of 7,784K. That’s a result erring towards cooler colours result, but it’s not a deal-breaker. With these benchmark results and G-Sync on board, this is a decent panel for gaming.

It’s better than the Acer Predator 17 thanks to a superior Delta E result and better uniformity, but it’s unable to overhaul the XMG U706. That panel had better colour accuracy and temperature, and it displayed a little more of the sRGB gamut.

The Fangbook has Sound Blaster-branded speakers – including a subwoofer – and the audio is managed by a dedicated app. The machine uses its Music mode by default, and it’s impressive. The subwoofer’s thump is pronounced without overpowering the rest of the range while the high-end is good, and only succumbs to typical laptop tinnyness with the highest tones.

The Movie and Speech modes ramp up the high-end to the detriment of other sounds, while Game mode simulates two speakers. The Surround option replicates a seven-speaker setup, and its added depth means it’s the best option on this machine.

It’s a good bill of health for the speakers but, as with the screen, the Fangbook’s audio kit can’t surpass rivals. Acer’s machine is just as good for gaming, but the XMG remains the leader here, with impressive detail in every aural department.

The Fangbook’s vast wrist-rest runs around a scrabble-tile keyboard. It’s backlit and has a rock-solid base, and its typing action is generally good: the keys have ample travel, and they depress with a consistent, quiet action. 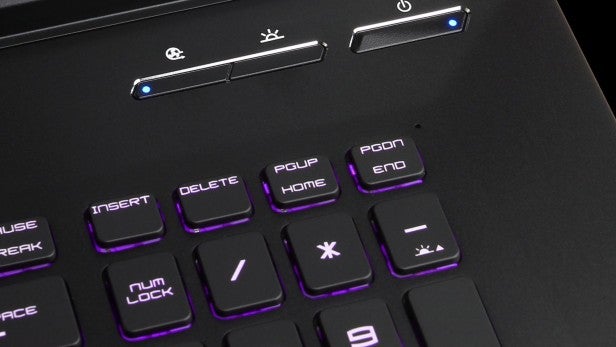 They’re absolutely fine for gaming as well as work and typing  but they’re not the best option. The XMG’s more traditional keys have a little more travel and speed, which makes them more suitable for hammering through the latest titles.

The Fangbook’s layout has a couple of issues, too. The small, half-height Return key is laughable on a laptop of this size and the Windows key has found itself on the right-side of the Space bar instead of the left. The cursor keys aren’t separated from the rest of the buttons, and the number pad feels cramped.

The trackpad isn’t the best I’ve used, either. The buttons are a little too stiff, and the pad itself has a bit too much friction. It’s fine, but one of the CyberPower’s many USB ports would be ideal for a proper mouse.