CyberPower has kitted this machine out with a nine-cell battery to try and counteract the high-end hardware inside.

Running at 40% brightness with mundane office apps running, the CyberPower lasted for four hours and five minutes. That’s a mediocre result: better than the XMG U706, but two hours behind the Acer Predator 17 and its vast 88.8Wh battery.

The Fangbook’s battery saw it last for just shy of an hour in a gaming benchmark with the screen running at full brightness. That’s a more conventional result, and only a few minutes apart from its rivals. That’s no surprise, though, given that the Fangbook is packed with high-end silicon.

The mighty desktop GPU proved to be a barnstormer in games benchmarks. Crysis 3 is the toughest test here, but the CyberPower swatted it aside with an average of 71fps – far better than the Acer and XMG machines, which averaged 56fps and 57fps respectively. 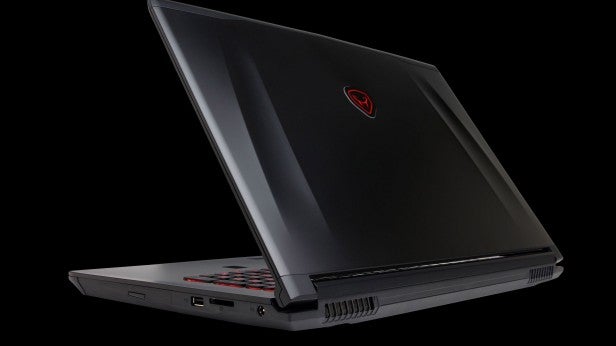 That’s a great start, and the Fangbook bolstered its slate of results in Battlefield 4: its average of 87fps was twenty frames ahead of the Acer, and further ahead of the XMG. The Fangbook then averaged 82fps in Bioshock – miles beyond the 69fps of the XMG.

This machine won’t struggle with any current game at 1080p, and it’s going to keep running games smoothly for years. Its sheer power was demonstrated in synthetic tests, too: in 3D Mark Fire Strike it scored 8,861, which is several hundred points ahead of both competitors.

There wasn’t much to choose between the three machines in application benchmarks, though. The CyberPower scored 12,466 in Geekbench 3, which is an excellent result – but it’s behind the Acer, and further back from the XMG, which used its desktop processor to score 13,937.

The CyberPower’s Cinebench score of 656cb is ahead of both rivals, but there’s still little to choose between them – and, no matter which machine leads the way in these tests, it’s clear that none of them will struggle with CPU-intensive games or applications.

The impressive CPU and GPU benchmarks were accompanied by top-tier SSD performance. Samsung’s PCI-powered drive rattled through the read and write tests and 1,850MB/s and 1,421MB/s. That’s around the same as the XMG’s drive, and miles ahead of the Acer. It’s an impressive pair of scores that means game and system boot times will be rapid – certainly quicker than any machine with a SATA-based SSD.

The Fangbook’s processor and graphics card peaked at 89 and 84 degrees respectively. That first figure is easily better than the Acer’s top processor temperature of 96 degrees, and the XMG’s desktop processor peaked at 99 degrees – enough to see its speed throttle.

CyberPower’s machine does get hot, but neither of those top temperatures are enough to throttle the components or cause any concerns about stability. The noise was never too bad, either; the fans modulated between two volume and speed levels during gameplay, but changes were always swift and the noise was never too bad – a little louder than its rivals, but not enough to cause concern.

CyberPower’s latest laptop is a monster notebook that uses its bulky, understated exterior to cram in one of the world’s most powerful graphics cores. It’s a bold move, but it pays off: it’s significantly faster than any rival in every game, and it’s got enough grunt to play any top-tier title for the coming years.

The GPU is backed up with a solid processor, great storage, and a high-quality screen. The trackpad and keyboard are fine, the design is solid, and battery life matches up with what I expect from high-end gaming notebooks.

But, while it doesn’t have any major issues, there are few areas beyond its GPU where the Fangbook excels. The XMG U706, in particular, has a better screen, keyboard and trackpad, and it’s also got a desktop CPU. There’s also the desktop argument: a PC to lug to LANs could be made more powerful for less cash, although it won’t have the portability of a laptop.

This laptop has lightning speed in games and has G-Sync, so it’s a worthwhile purchase if you really need a desktop GPU in a laptop – and it’s cheaper than the XMG, too. A glance around the market, though, will reveal capable gaming notebooks that are slimmer, lighter and cheaper still.

This machine’s desktop GPU gives it fantastic gaming power, and it impresses in other departments with its high-end specification and robust design. However, in many areas its rivals are a little better, and the GTX 980 is arguably overkill for a 1080p gaming notebook. It’s an impressive notebook, but other machines are slimmer, lighter and cheaper.