The latest gaming laptop to arrive on my test-bench is a monster. The CyberPower Fangbook 4 SK-X17 is one of the heftiest notebooks I’ve seen for some time, but that’s not all that impresses.

It has high-end components, too, including some silicon that’s usually found inside desktop machines. Finally, with Nvidia G-Sync support, this is one of the most fully-featured laptops I’ve seen in quite some time.

Video: Trusted explains the difference between tablets and laptops

The CyberPower has a 17.3-inch screen, which puts it right into the top tier of gaming notebooks in terms of size. This is matched by its colossal weight of 3.9kg and a chunky 47mm chassis.

The Fangbook’s size and weight mean I’d want a sturdy backpack to use when lugging this machine to LAN parties. It also means that it’s bigger than its key rivals. The Acer Predator 17 and XMG U706, both reviewed recently, weigh about the same as the CyberPower, but both of those are almost a centimetre slimmer. And that’s just as this end of the market – many other gaming notebooks are thinner and lighter still.

Despite its heft, the Cyberpower Fangbook 4 SK-X17 won’t turn heads. The matte black lid is completely plain aside from a subtle CyberPower logo along its top edge.

Ease the huge lid open and not an awful lot changes: the keyboard is only surrounded by a tiny Intel sticker on the right and a row of small shortcut buttons on the left. 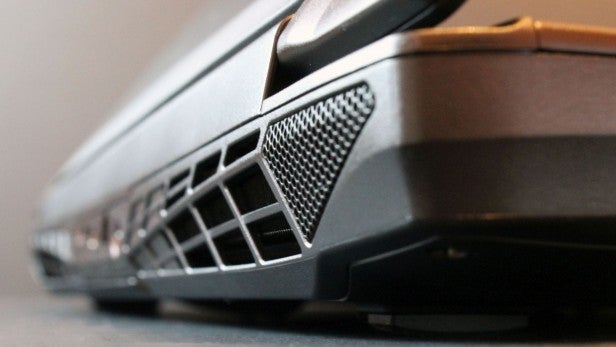 CyberPower’s machine might not stand out, but it’ll stand up to punishment. It’s made from tough stuff and I had a hard time getting its material to give under even fairly extreme pressure.

Despite its strength, the innards of the laptop are fully accessible and partially upgradable. The entire base panel can be removed, which means the storage, memory and wireless card can all be accessed. There’s a spare M.2 socket for high-speed storage, and the cooling gear can all be disassembled if it needs a clean.

It’s versatile inside and out: Six USB 3.0 ports is a generous helping for any laptop, and there are four 3.5mm audio jacks – twice as many as most portables. There’s an SD card reader and a USB 3.1 Type-C port, and HDMI and mini-DisplayPort outputs. It beats both of its high-end, 17.3-inch rivals in this respect, which is handy for what is essentially a desktop PC in all but name.

This laptop might be heavy and bulky, but as you might expect, it’s not bricks but high-end components that fill out the chassis, so the weight is more than justified.

Graphical grunt comes from an Nvidia GeForce GTX 980. That’s the desktop version of Nvidia’s most powerful GPU, rather than the mobile 980M used in the Acer and XMG machines.

There’s a big difference between the desktop and mobile chips. The Fangbook’s desktop version has 5.2 billion transistors and 2,048 stream processors, a clock speed of 1,126MHz and a massive 8GB of 1,753MHz GDDR5 memory. The mobile model has 1,536 stream processors and a lesser clock speed and, in the case of the Acer, it’s only serviced by 4GB of RAM.

The tables are turned in the processor department. The CyberPower’s Core i7-6820HK sits in the middle of Intel’s mobile range with four cores and a 2.7GHz core that can boost to 3.6GHz. The XMG has a desktop-class i7-6700K, which starts at 4GHz and boosts to 4.2GHz, which is a huge step up from the laptop-class chip in the CyberPower. 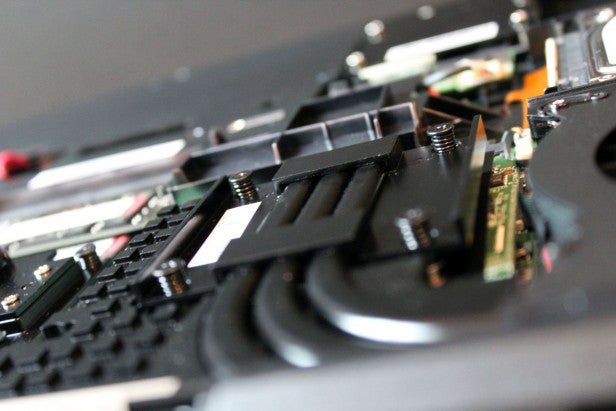 In other departments the CyberPower ticks most of the boxes. It comes equipped with 16GB of DDR4 memory, which matches the XMG, and its boot drive is a 256GB Samsung SM951 PCIe-based M.2 SSD. That’s the same model as the XMG, but half the capacity – and easily better than the SATA-based drive in the Acer.

Connectivity is conventional, too: Killer Ethernet is useful for prioritising games traffic, and there’s dual-band 802.11ac wireless. That Killer Ethernet connection has a companion app for traffic management, and the Fangbook also comes with software to change the colour of the keyboard’s backlight and quickly access basic screen and connectivity options.

CyberPower’s machine has an impressive specification, and it’s possible to alter many of the components on the firm’s online configurator. The memory can be dropped down to 4GB (not recommended) or 8GB or increased to 32GB, and there are two dozen storage options available, spread between M.2 drives, conventional SATA SSDs and bog-standard mechanical hard disks. CyberPower also sells cheaper variants of this model at a lower price with a mobile GTX 980M GPU instead of the desktop one on test here.

There’s more versatility here than on the Acer, which can only be purchased with one alternative specification – but the XMG machine still wins when it comes to customisation. As well as offering memory and storage changes, the processors and graphics cards can also be altered.

The Fangbook arrives with a one-year labour and parts warranty that includes a month of collect-and-return coverage. That’s fine – and matches the Acer – but it’s half as long as the XMG’s warranty. The U706 has a two-year collect-and-return deal that also includes parts and labour.