Ever since the first beta-stage 64-bit operating systems arrived, video editing has been one of the tasks suggested as most likely to benefit. Even in its compressed form, video takes a few megabytes per second, and once you uncompress it to individual frames, with 25 of them every second, the requirements are even more. So it’s a surprise that although its professional-grade video editing app, Adobe Premiere Pro CS5, went 64-bit in 2010, Adobe hasn’t yet made this technology available in its consumer-grade Premiere Elements 9. Instead, the accolade for first 64-bit consumer video editing app goes to CyberLink, with PowerDirector 9.

The advantage of a 64-bit operating system is that it supports more than 4GB of memory. Whilst you can run a 32-bit app on a 64-bit operating system and get some benefit, with a true native 64-bit app your software can address as much memory as the system allows. If you’re shunting around huge blocks of video data, you can keep more in RAM and therefore offer a smoother editing experience, with real-time previews at a higher frame rate. The TrueVelocity 64 engine CyberLink has now placed at the core of PowerDirector 9 promises this benefit, but there are other technologies to back it up. 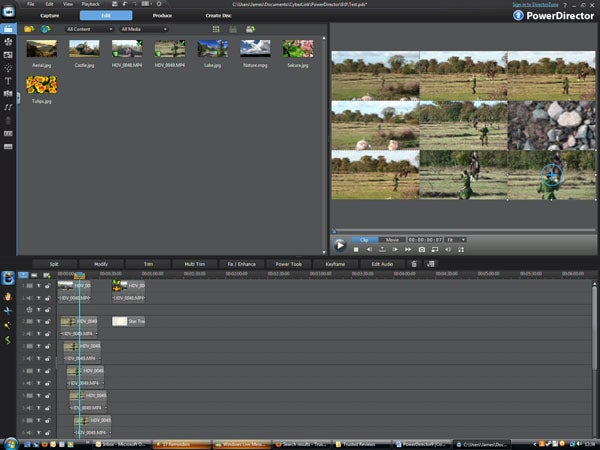 (centre)”’The new 64-bit engine allows much smoother preview of multiple video streams, although nine was a bit much for our test system.”’(/centre)


Virtually all current desktop CPUs are multi-core, and PowerDirector’s TrueVelocity Parallel splits the processing tasks into multiple threads that can be farmed out to individual cores to run at the same time. Graphics card grunt can be harnessed, too, with both AMD and nVidia graphics supported. This is called into play for the encoding and decoding of video, as well as some effects, indicated by the logo of your graphics card manufacturer in the bottom right-hand corner. So it aids both editing and final project output, particularly encoding H.264. 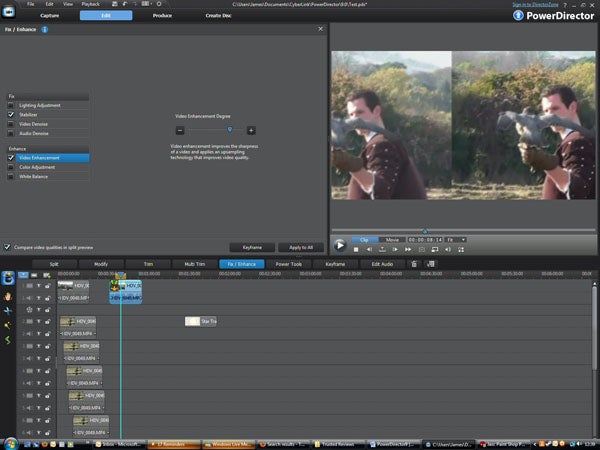 
Well, that’s the theory, anyway. We tested PowerDirector 9 on a rather mid-range system using a 2.2GHz quad-core AMD Phenom 9550 with a 64-bit build of Windows, 6GB of memory, and a nVidia Quadro FX 1700 (a mid-range professional graphics card a couple of generations old). We found this system could mix three streams of HDV quite smoothly, four streams with some jerkiness, but more than five streams chugged to a halt after a few seconds.


Nevertheless, this is significantly better than Adobe Premiere Elements 9, which couldn’t even cope with three simultaneous streams on the same system. During playback, PowerDirector 9 was using 100 per cent of processor time, so multi-threading was clearly fully operational. We also noted an improvement in playback frame rate when we enabled GPU acceleration, which had to be performed manually within the preferences.

CyberLink capitalises on the potential of its new 64-bit engine by increasing the number of possible video and audio layers to 100. However, it’s worth noting that the TrueVelocity 64 engine is only part of the premium Ultra64 version of PowerDirector, not the cheaper Deluxe version, which remains a 32-bit app and is therefore a much less significant update over previous iterations. 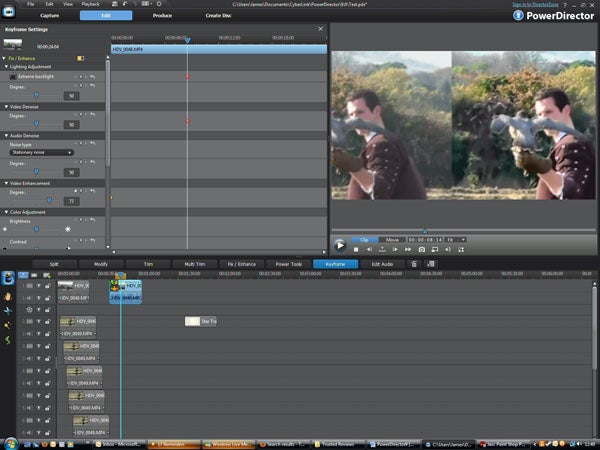 (centre)”’Most effects can be varied over time using a new universal keyframing interface, making it easier to synchronise your changes.”’(/centre)


PowerDirector 9 now has a broad range of video improvement tools found under the Fix/Enhance tab. These include what CyberLink is calling its TrueTheater technologies, and encompass lighting adjustment, stabilisation, denoising of both video and audio, and various video enhancements. The effects offer just a few parameters, to keep them simple, but you can use a split screen to compare the original with the results. We found the video enhancement filter offered similar abilities to Adobe’s Shadow/Highlight for bringing out contrast and detail. These effects can all be keyframed, and this interface is now integrated and universal across most effects that support parameters varying over time. This makes it much easier to synchronise your effects. 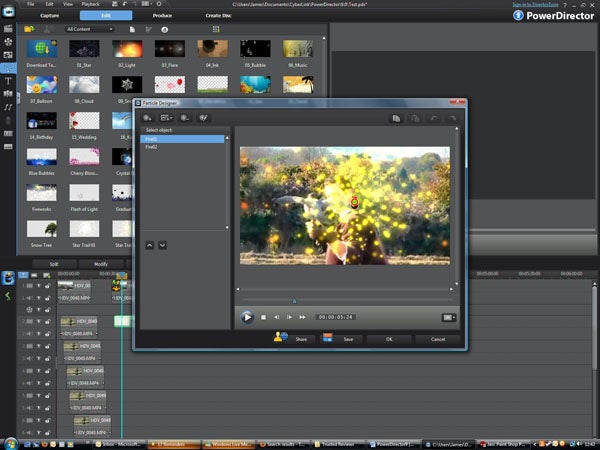 (centre)”’The Particle Designer lets you create your own custom particle overlays, with a host of presets also included.”’(/centre)


However, the universal keyframe interface doesn’t include the Power Tools, which enable you to change video playback speed, play clips in reverse, or crop. Whilst the crop Power Tool can be keyframed, this instead relies on a separate dialog, which also doesn’t preview any of your other effects. Rounding off the new filter additions are the Particle Effects. You can add canned snow or smoke effects as video overlays, or open the full interface and customise your own streams. These can’t be keyframed, however, and even though they sit on a separate video layer you can’t add keyframed motion and effects on top either.

Audio editing abilities have been improved considerably by the addition of a dedicated WaveEditor. This is a separate audio editing app, which you can use independently, but it can also be called from within PowerDirector using the Edit Audio tab. It supports round tripping, so any changes you make will be saved back into your project. The WaveEditor includes tools like pitch shifting, equalisation and more powerful noise removal, although not using a noise sampling system. It also supports VST plugins, so you can extend its capabilities with any of these you have installed on your system. 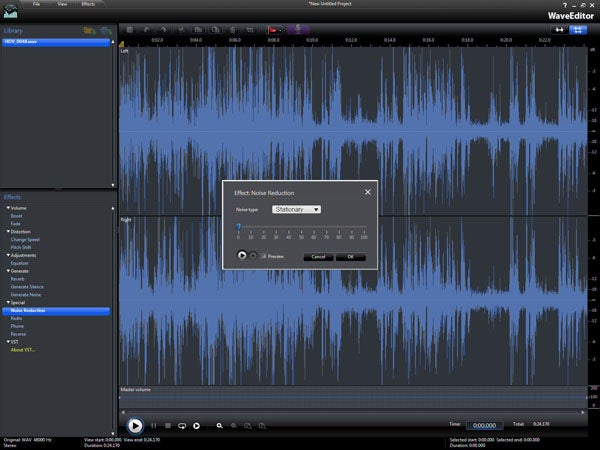 
The MagicStyle Movie wizard has a new feature, with the ability to create 3D scenes into which you can insert photos and videos. The wizard will then create an animation that moves between the photos, for example as if they were pictures in a gallery, although it still ends up with a simple slideshow at the end.


You can extend the options online, too. CyberLink launched the DirectorZone with the last version of PowerDirector, and this continues to grow. DirectorZone is a site where PowerDirector users can upload presets, assets, and even tutorials. CyberLink claims there are now over 100,000 items available for download on DirectorZone, which you can access directly from the app, grab content, and install it for immediate use in your projects. 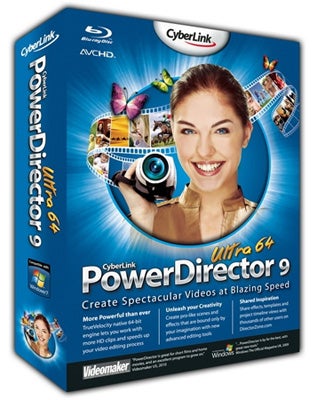 The main additions at the output stage are support for Facebook, and greater hardware acceleration when encoding. The former is now becoming a common feature in video apps, which is unsurprising considering Facebook’s ranking as one of the most popular websites in the world. There’s also support for burning BDXL discs, with capacities of 100 or 128GB.


For many years, PowerDirector has been closing the gap with the incumbents in consumer-grade desktop video editing, Adobe Premiere Elements and Corel VideoStudio. Although both of these still offer a little more control in key areas, the difference is nowhere near as great as it was.


With its more responsive interface and smoother previews, PowerDirector is actually a little easier to use than either of them for many everyday tasks. So whilst we still recommend Adobe Premiere Elements 9 for its sheer breadth of capabilities, by embracing native 64-bit code first, CyberLink PowerDirector has finally stolen a lead. Make sure you get the Ultra64 version, though, as the £20 saving of the Deluxe edition is clearly a false economy.