In the past, CyberLink’s PowerDirector has felt like an also-ran. It may be bundled with quite a few camcorders, but most video makers interested in editing will have wanted to move onto something more powerful fairly quickly. With version 7, however, CyberLink is hoping to make PowerDirector an application you might want to stick with a bit longer. Some new versions seem more like dot releases, but the shift from PowerDirector 6 to 7 is more of a leap than a baby step. 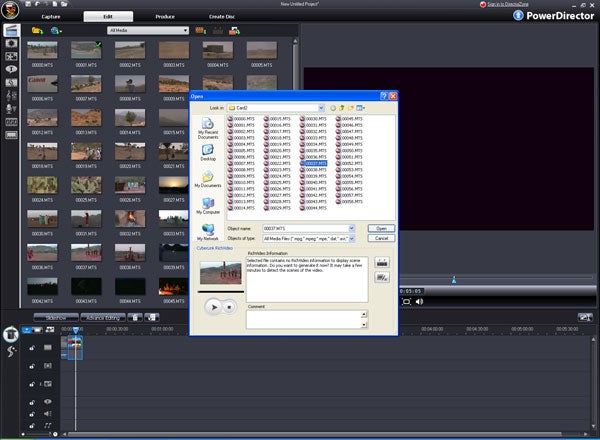 
For starters, CyberLink has followed the trend and given PowerDirector a graphite finish to its interface, making it look vaguely like Adobe Premiere Elements 4. It’s also available in two versions – Ultra and Deluxe. Both variants will import pretty much every format under the sun, including HDV and AVCHD. The differences show themselves at the output stage. The Deluxe edition can’t create AVCHD files, can’t author Blu-ray discs, and can’t write AVCHD and other Blu-ray video formats to DVD. These are features most people will want to pay the extra £20 for, however.


In these days of camcorder format confusion, editing software needs to cope with a hefty array of different file types. So we threw everything we had at PowerDirector, from DV to MPEG-2, and HDV to AVCHD. The separate capture section has sections for DV, HDV, analogue capture cards, digital TV tuners, webcams, soundcards, audio CD and video DVD. However, there’s no specific import wizard for pulling footage off a hard disk or flash memory-based camcorder. Instead, you have to copy the files manually to your hard disk, and then use the import command in the media library 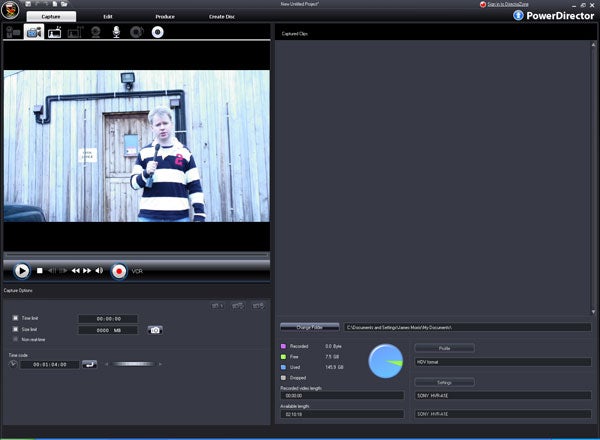 (centre)”’PowerDirector 7 can capture from the full range of sources, including DV and HDV, analogue and digital TV tuners, and webcams.”’(/centre)


Since CyberLink holds a few key patents in Blu-ray, we expected PowerDirector to cope with most things, and we didn’t manage to find anything the software wouldn’t import. Progressively scanned Full HD files from Canon’s HF10 were handled without issue, as were the TOD files created by JVC’s High Definition Everio camcorders (which isn’t surprising, as a version of PowerDirector is bundled with these camcorders). The aspect ratios were correctly displayed in almost all cases, with the notable exception of the MOD files created by Panasonic’s SDR-S7, which uses a slightly non-standard 704 x 576 frame size.


It’s at this stage in the editing process that we start to encounter PowerDirector’s plethora of new features. Instead of having one amorphous media library, you can now create a second layer of subfolders to assist file management – although only one. Annoyingly, importing files into the media library and folder creation are only accessible via icons at the top, not via a right mouse-button click.

Aside from bringing in your own video, image and audio assets, you can also import from Flickr and Freesound (a royalty-free audio library) directly. Simply supply your login details for either service (or sign up when prompted), and you can then search their databases within PowerDirector, preview sounds and images, then download your choices straight into the media library. The Flickr connectivity gives you direct access to your own account, so you can bring in photos you uploaded. You can also choose the size to download. The Flickr access can be used without an account, too, and we found this was sometimes preferable as otherwise the applet kept expecting us to authorise its use on the Web, each time we accessed it. 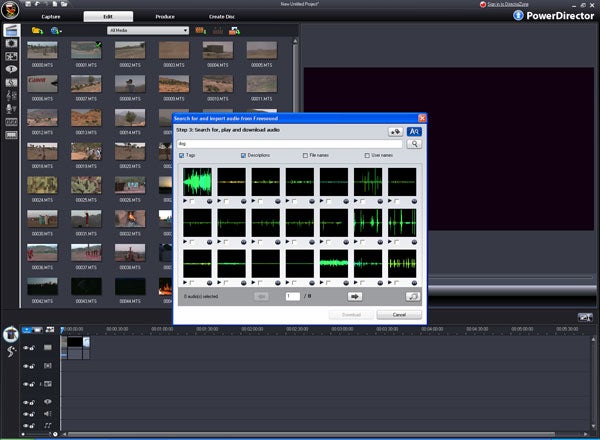 (centre)”’Audio effects from Freesound and images from Flickr can be imported straight from the web into the PowerDirector media library.”’(/centre)


PowerDirector has traditionally had a competitive level of support at import and export stages. Where it has fallen down in the past is the all-important middle stage – the editing itself. This is where CyberLink has focused most of its attention. In the past, you could only have one extra layer of video, and only one effect could be applied to a clip at once. This would also be static, with the same settings through each clip’s duration. 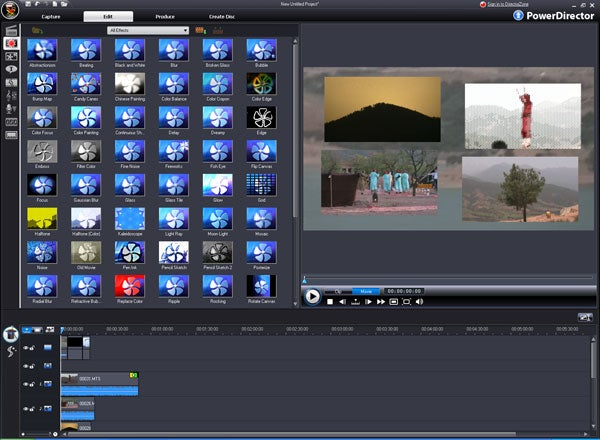 (centre)”’CyberLink has answered one of the criticisms of previous PowerDirector versions by allowing up to six picture-in-picture tracks.”’(/centre)


With version 7, you can now have up to six Picture-in-Picture tracks, and layer seven effects. This is still a far cry from Adobe Premiere Elements, but it will be enough for most editing tasks. Best of all, effects can now be keyframed. So you can vary intensity at different points during a clip’s duration. This is easily achieved using the Effects tab, which provides simple tools for adding keyframes and navigating between them. 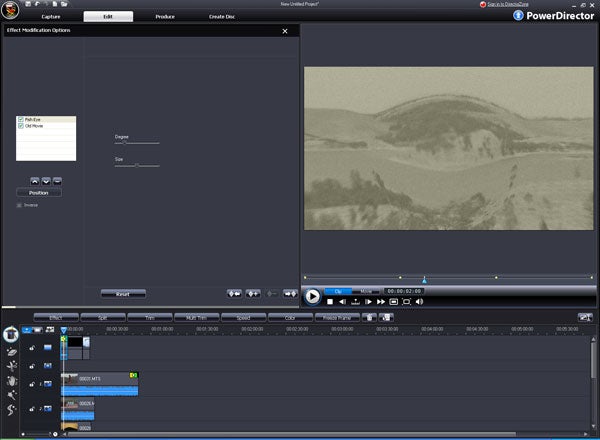 (centre)”’Effects can now be layered and keyframed – two more major deficiencies in previous versions of PowerDirector.”’(/centre)


Basic image enhancements are still found amongst PowerDirector’s Magic functions. Magic Clean essentially includes colour correction tools, such as Lighting Adjustment which lets you adjust brightness. This also includes an Extreme Backlight setting, which can help you counteract the negative effects of shooting your subjects against a bright background. The Color Adjustment tool covers sharpness as well as brightness, contrast, hue and saturation. White Balance can be adjusted via colour temperature or picking white.


Magic Fix is simply CyberLink’s name for video stabilisation, counteracting shaky camerawork. But this can now be adjusted for strength, rather than taking a one-size-fits-all approach. However, whilst Magic Clean and Magic Fix can be used with other effects, the Magic Cut and Magic Style functions, which edit your video for you automatically, wipe out any effects and editing you previously applied. Unfortunately, the keyframing ability also hasn’t been carried forward to the Magic tools.

The Picture-in-Picture tracks are now equipped with a much more powerful motion control applet. This allows you to use a shape as a border, although not a custom one. Alongside the preset motion paths, you can also now fully customise the paths, adding keyframes, although there is no control over how the motion eases in and out of keyframes. So it’s not as powerful as Adobe Premiere Elements’ motion control, but is pretty easy to use and another welcome addition. You can also save your motion control settings as a new preset, and even share them via CyberLink’s new DirectorZone community. It’s a shame filter effects can’t also be saved out in this way. 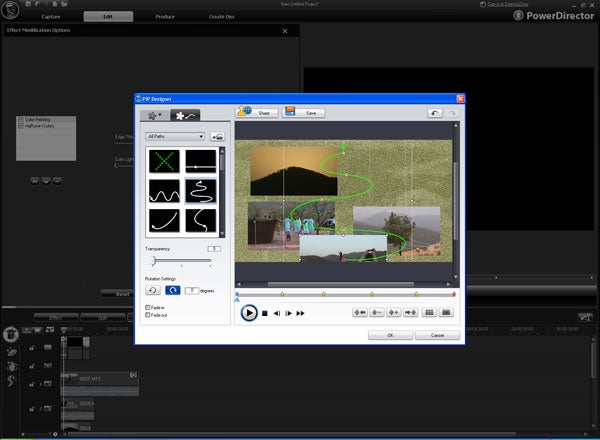 (centre)”’The motion control applet is now much more powerful, and even allows you to save and share your customised motion paths.”’(/centre)


Subtitling is another new area for PowerDirector. These appear as a track in the timeline, and can be easily lined up to coincide with dialogue using the tools available in the Subtitle Room tab. The Slideshow Designer is also new, and here CyberLink has gone further than most applications. It’s still a template-driven process, with seven initial options. But Cyberlink has created much more elaborate image slideshows than can be found in most applications, using segmented screens and animations. Some templates have Advanced settings that provide a fair amount of user customisation, too. Photo animation can also be made to match the music you choose, using CyberLink’s own automated detection algorithms. However, slideshows can only be created on the first video track. 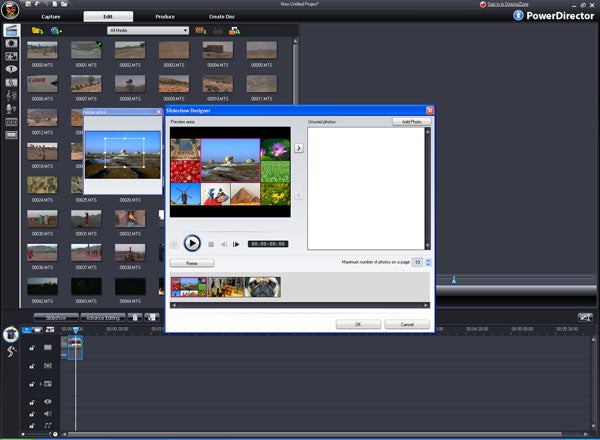 
As hinted earlier, the output stage has been one of PowerDirector’s stronger areas for some time, with its early adoption of new file formats. This aspect of version 7 hasn’t changed much. The Produce tab calls up a wizard with six options. You can write back to DV and HDV tape. Streaming video can be encoded in WMV, RealVideo and QuickTime formats, although it’s not possible to edit the presets provided for each. But writing to other video file formats is not confined to presets. You can choose between AVIs, MPEG-1, MPEG-2 and three flavours of MPEG-4 – DivX, PSP/iPod compatible, and AVCHD – with full control over each codec’s settings. 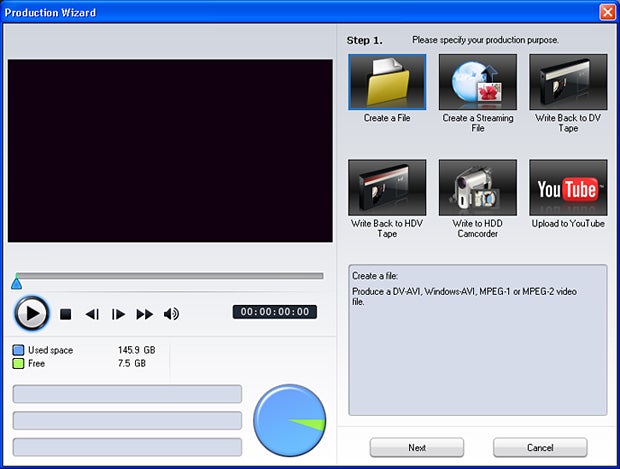 (centre)”’Output options are comprehensive, including recording back to DV and HDV tape, plus most common video file formats and uploading to YouTube.”’(/centre)


CyberLink even includes the ability to write back to a hard disk-based camcorder, but only if it was made by JVC. Unsurprisingly, you can also upload straight to your YouTube account, as with the previous version. If the output format you choose is the same as the clips being edited, you can toggle SVRT smart rendering, so only changed sections are actually rendered. This now includes support for H.264-based files, although only with the Ultra version of PowerDirector as the Deluxe one can’t write back to this format. 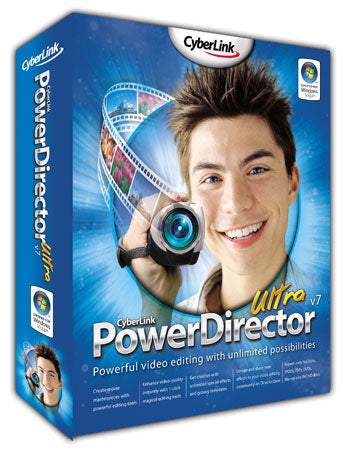 Disc creation has its own section, and can burn video to DVD, SVCD, VCD, Blu-ray, Blu-ray on DVD, and AVCHD. The authoring tools are extensive, but haven’t changed much in the last few versions, apart from the ability to share and download custom menus via the CyberLink DirectorZone.


CyberLink PowerDirector 7 still misses a few tricks compared to competitors from Adobe, Ulead, and Pinnacle. It doesn’t have anywhere near the level of control of Adobe Premiere Elements 4, and lacks a few features found in Ulead VideoStudio and Pinnacle Studio, such as the latter’s excellent 5.1 Surround Sound editor, or the former’s DeBlock and DeSnow filters. But all the major components of a serious videomaking contender are now there. At last, PowerDirector is worth considering alongside the mainstream alternatives.