CyberLink took a technology lead with thelast version of PowerDirector, which was the first consumer-grade video editing app to go 64-bit. The tenth incarnation doesn’t have anything quite so groundbreaking to brag about, but it still has plenty of reasons to proffer as to why you should be considering it alongside Adobe Premiere Elements and Corel VideoStudio. Not only has the rendering engine been further improved, but there’s also significant support for 3D.

The major performance enhancements, apart from general engine tweaking, are in the Open CL support and H.264 encoding. The former is a system a bit like DirectX, but aimed more generally at any compute-intensive tasks. It harnesses the media processing abilities of CPUs and the graphics processing abilities of GPUs for other tasks, in this case effects rendering. During testing, enabling this mode did result in smoother playback, although it was more of an incremental improvement than sea change. PowerDirector already had one of the smoothest real-time rendering engines of any consumer-grade video editing app, and this merely cements its abilities. CyberLink is also promising one of the quickest H.264 encoding engines, and there’s SVRT technology to help out here, which only renders video sections which have been changed, although this isn’t standard for H.264 and can produce files with incorrect Bitstreams. Together with the Open CL support and other performance improvements, CyberLink is calling the new rendering engine TrueVelocity 2. 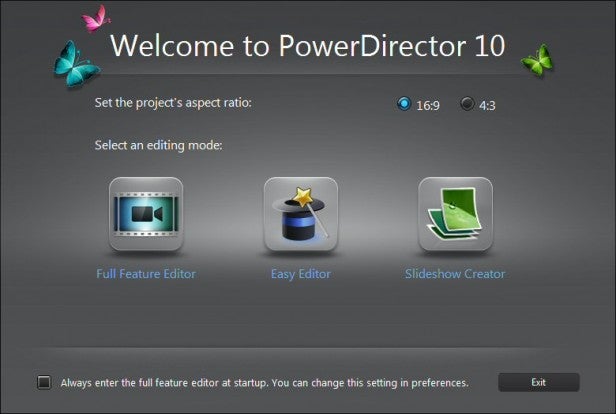 The 3D support is very extensive. You can import 3D video and still images in all the main formats, including side-by-side and most notably Multiview Video Coding (MVC) video. This is the format used by JVC’s dual-CMOS Everio GS-TD1, and we’ve not come across any mainstream editing app with the ability to handle these files correctly until now, which is a shame as they maintain Full HD resolution in 3D, unlike the side-by-side alternative. Some 3D files are detected automatically, but we didn’t find this is true of every file type. Some side-by-side 3D we imported was initially displayed as 2D. Fortunately, you can tweak the properties of files manually, and set these up correctly. It’s also possible to watch your video onscreen in 3D, with a simple button beneath the monitor window toggling anaglyphic display off and on.

PowerDirector 10’s 3D abilities go well beyond merely importing and displaying footage, however. There is also a variety of effects you can apply in 3D. The Picture-in-Picture graphics can be superimposed in the third dimension, so they float above underlying video, although this can look a little unrealistic. Perhaps the most impressive of all are the particle effects. These create synthetic animations such as falling leaves or fire, and there are 3D versions available. So you can have autumnal foliage cascade in front of your 3D video, for example. It’s a bit cheesy, but visually impressive. There are also numerous filters which also work in 3D, so you can create three-dimensional sepia or negative imagery, amongst many others. 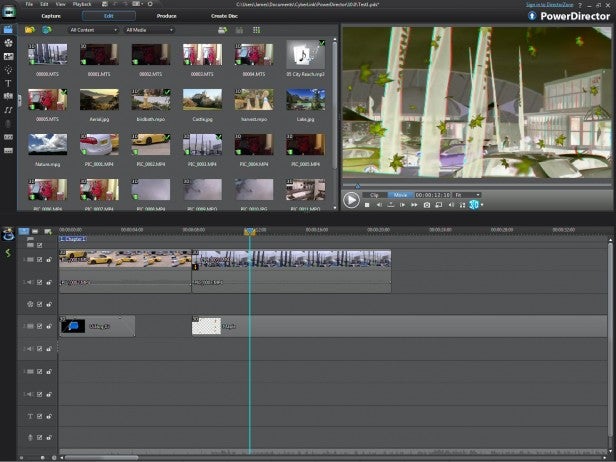 There are a number of non-3D effect enhancements, too, just in case you’re not sold by the third dimension just yet. On loading the software, you’re given the choice to load the Slideshow Designer or a wizard-based Easy Editor, as well as the full video editing environment. The Slideshow Designer now has a host of new templates, including a Time Lapse option, which lets you string together a series of photographs shot at intervals into a slideshow animation. Even this can be toggled to be in 3D, too.

The paint tool now has the ability to record your actions. So you can capture the process of drawing as an animation, and then play this back either on its own or over the top of other video tracks. This isn’t quite an animated version of Adobe Illustrator inside your video editing app, but there is some control over brush style and material, so you can create some pretty cool effects. 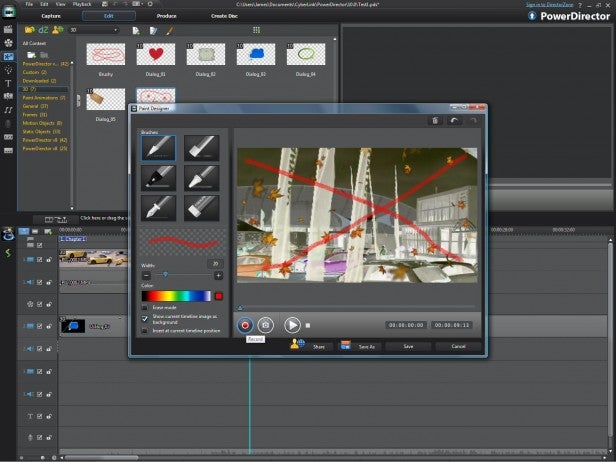 A couple of useful audio tools have been added as well. The Beat Marker lets you take the music soundtrack you have added and analyse it for rhythm. This then adds markers at the top of the timeline, which you can then use to synchronise your edits with the music. It seems to work quite well, and you can vary the minimum time between beat markers so you don’t create too many of them. This tool can be used with any audio track, not just the one specifically aimed at music soundtracks.

Of more everyday use is the Normalise tool. Head into the track mixer, and a new button lets you normalise audio levels on a per-track basis. This is nice and simple for novice editors, but there will be times when you only want to normalise a selection of clips, and there are no parameters to configure here either. But it’s still a useful tool for keeping your audio levels more uniform. 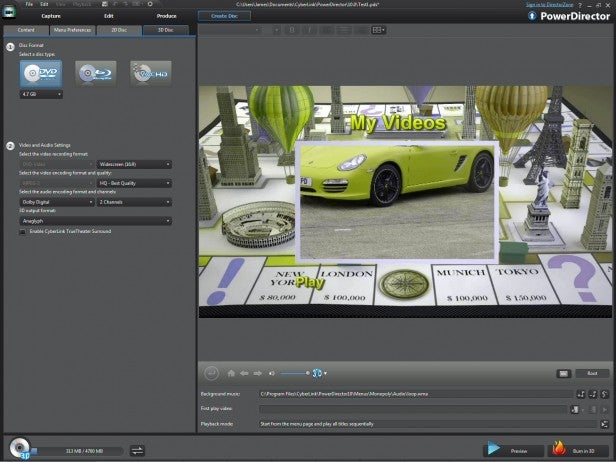 Aside from the aforementioned H.264 encoding performance enhancements, most of the output improvements revolve around 3D as well. You can now upload footage to YouTube’s 3D service, which inserts the necessary control tag into the upload to enable the YouTube 3D player. Online support has been further modernised to include Vimeo and Dailymotion, alongside the previous inclusion of Facebook, although Twitvid hasn’t been added. There are naturally 3D options when burning to disc, and they are pretty comprehensive. Aside from offering Blu-ray and DVD, there’s the ability to burn AVCHD to DVD or other removable discs. You can create a disc menu in 3D as well, with a small selection of templates available.

Over the last ten years, we have watched CyberLink add all the key editing features to PowerDirector, and with the last couple of versions the software has begun to include capabilities which the major competition doesn’t have. We still find some of the effects and graphics templates a little garish, but the playback engine is very smooth, and more than capable of rendering the two Full HD streams in MVC 3D video. This is also the first video editing app we’ve used which feels just as home editing 3D footage as it does 2D footage. If you’re not interested in 3D, there’s less here to entice you. But PowerDirector is now very much a contender.