Where once it was essential to have Power DVD (or an equivalent) to watch a film on a PC, DVD playback has been native to Windows for a long time now. For many this is more than adequate, but with the advent of Home Theatre PCs and high definition TVs and displays, there’s a greater demand for a software player that can do a little more than the basics. This includes DVD upscaling, now a prerequisite for playing back standard definition content on HDTVs, but also Blu-ray playback, which won’t be supported natively by Windows until Windows 7 is released. 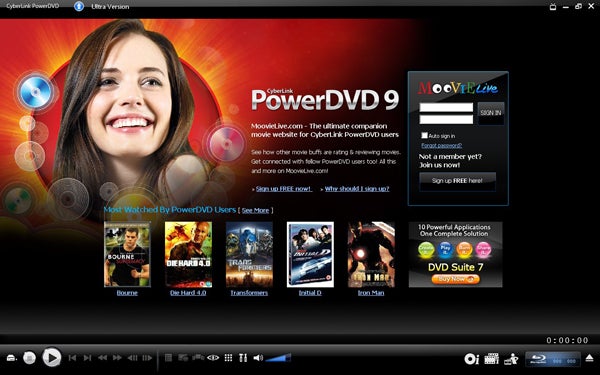 Being the top of the range version of the software (the others being Deluxe and Standard), Power DVD 9 Ultra has more or less every feature imaginable. Newly added support for the HDMI 1.3 standard means you benefit from Dolby TrueHD support up to 7.1 channels and DTS-HD Master Audio support up to 5.1 channels, while Dolby Digital (5.1), Dolby Digital Plus (7.1) Dolby Pro Logic IIx, Dolby Headphone, DTS (5.1), DTS 96/24 (5.1) AAC (5.1) and lossless MLP finish off the audio codec support. 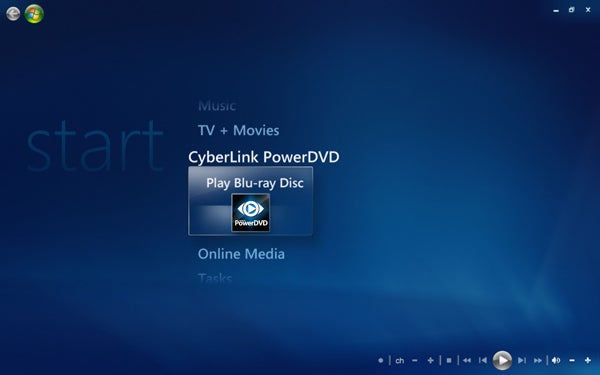 Beyond codec support, though, there’s quite a bit more to the latest version of Power DVD. No doubt its headline feature (among HTPC users at least) is the integration into Windows Media Center, since this allows you to launch Blu-ray playback within MCE and retain a consistent interface and navigation that’s remote friendly. This also means you can play DVDs using Power DVD within MCE, bringing into play Power DVD 9’s other key feature: software-based upscaling. 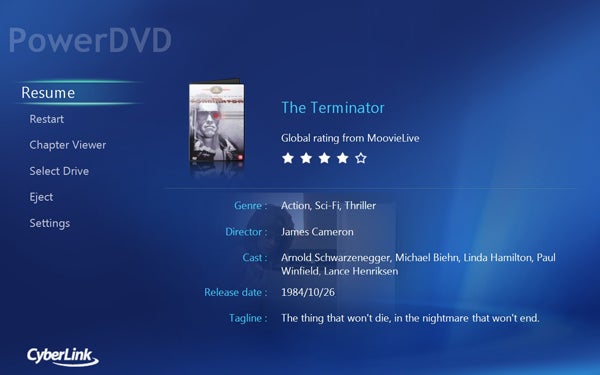 This comes under what Cyberlink calls TrueTheater. This encompasses three different processing technologies: TrueTheater HD, TrueTheatre Lighting and TrueTheatre Motion, all of which aim to enhance your DVD viewing to unprecedented levels. This technology is native to all the different versions (Ultra, Deluxe & Standard) of PowerDVD 9, too, so if you don’t need or want Blu-ray playback then you can still enjoy better DVD playback and not pay for the extra licenses. It should be noted, though, that none of these technologies impact Blu-ray playback since HD material is hardly in need of heavy processing to tart it up.

There are a number of things that make TrueTheatre a very effective system. For starters it’s easy to control. During playback you can bring the TrueTheatre control panel up at any moment and it can be set to automatic, where the software chooses the best settings, or manual, where you can adjust the various settings using the intuitive sliding bars. In general we’d always opt for manual adjustments where possible, though the automatic mode proved suitably frugal in its application of the processing. Vitally, Cyberlink has added a split-screen and clone modes here, so you can easily compare between the original source and the output once the processing is applied. 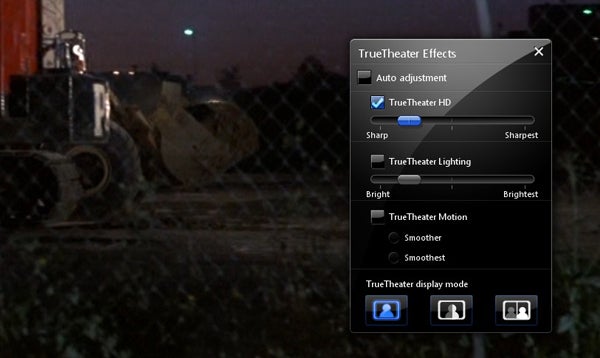 Of all the various modes, TrueTheatre HD (the upscaling element) is easily the most impressive. Whether it be a high-quality DVD such as The Matrix or The Bourne Ultimatum, or something more patchy such as Seven or The Wire (which is shot in 4:3), it does a superb job of bringing out detail, sharpening soft images and eliminating blocky artefacts.


This excellence is particularly evident in the Morpheus and Agent Smith interrogation scene in The Matrix. Here, with the TrueTheatre HD mode set to around three stops above zero (less than half), the skin texture and scars on Laurence Fishburne’s face are brought out to a level that’s almost unrecognisable from the original DVD. TrueTheatre HD also did an excellent job of tightening up the sumptuous animation in Akira, reminding us exactly how ahead of its time this masterpiece really was.


You do have to be careful how you set-up TrueTheatre HD, though. As intimated above you rarely need to have it set more than a few levels above the minimum; beyond this and things get very noisy and ugly. Indeed, even at modest settings, there’s always a little noise, though it’s generally of a finer and less irritating nature than that found in the original source. 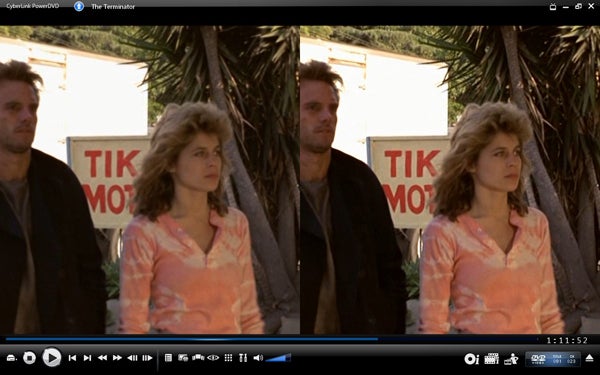 Even so, as Morgan Freeman chats to Brad Pitt at a bar in Seven, some pixel flutter is evident as the processing engine grapples with the complexity of the scene and mediocre source quality. Nonetheless, it’s not dramatically worse than we’ve seen on other hardware devices or the hardware upscaling engine found in the Toshiba Qosmio G50-115, which Power DVD’s upscaling renders largely redundant.


Impressive as TrueTheatre HD is, the Lighting and Motion variants are less convincing. Lighting, like the HD mode, should be used sparingly, but even so the results can be inconsistent. Though it does add a certain level of dynamism to brightness and contrast in pictures, this can also lead to overblown highlights and colour contamination. This was evidenced by Seven, where the dingy walls of the police station were often given an unfaithful green tinge that was particularly distracting. 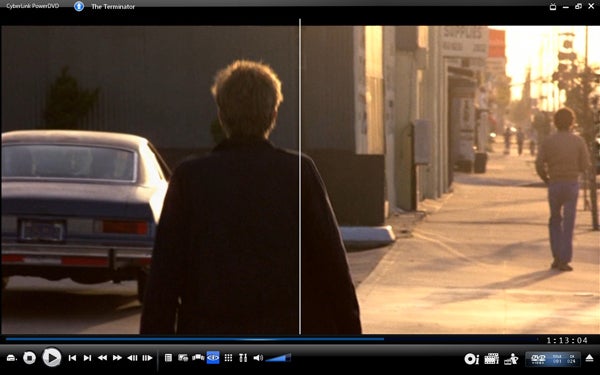 TrueTheatre Motion, meanwhile, which aims to create smoother “judder-free” playback by increasing the frame rate, proved to be too subtle to easily judge. Given it adds a significant extra processing overhead in addition to the large chunk taken up by the upscaling processing, we found we could live without it easily and anyone using a decent HDTV will likely prefer the motion processing inherent within it.


As a whole, though, the TrueTheatre system is very successful. Indeed, our only really significant complaint regards the processing power it requires. Being a software solution it’s totally reliant on the CPU and on a notebook running an Intel Core 2 Duo T7250 at 2.0GHz it consistently used around 50 to 60 per cent of the CPU; sometimes up to 80 per cent if using TrueTheatre Motion and HD simultaneously. This isn’t a reason to avoid Power DVD 9 and we never encountered any performance related issues, but GPU acceleration for TrueTheatre is a feature we’d dearly love to see in future.

Having been pleased the DVD playback our experiences with Blu-ray playback were equally positive. We didn’t encounter any performance issues and among the number of Blu-ray discs we tested, no compatibility issues either. Hardware acceleration is completely supported, as you would expect, but beyond this Power DVD 9 wisely doesn’t interfere with processing unduly, producing the sharp, well-defined images that we all associate with Blu-ray. We’d wager a proper hardware player will always deliver better overall image quality, but only the exceedingly picky will find fault with Power DVD 9’s output.


While we’ve spent a fair amount of time looking into the basic performance of Power DVD 9, Cyberlink has also implemented a number of user interface (UI) enhancements, too. This includes a rather nifty animated DVD browsing system with a rather idiosyncratic title: ‘FancyView’. This leans heavily on inspiration taken from Apple and its Cover Flow interface, but here it’s applied to navigating the chapters from DVDs. It’s a really neat implementation and is certainly preferable to using the menus in DVDs, which can often be very clunky, though this feature doesn’t work for Blu-ray discs due to the different system they use. 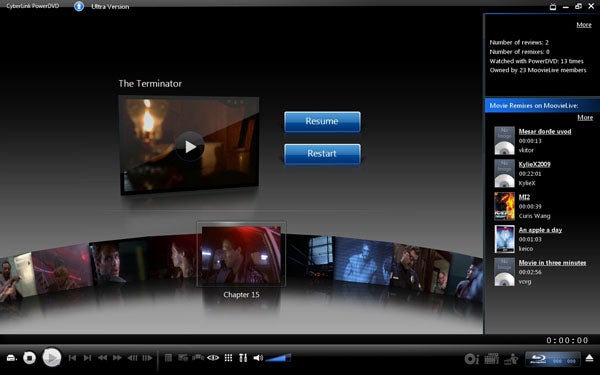 Of more interest to HTPC users, though, will be the new Cinema mode. Like the MCE integrated element this is designed to be used with a remote from a distance, utilising the red, green, yellow and blue context sensitive buttons found on most remotes to good effect. Other useful elements include Cyberlink’s Moovie Live online companion service and the linked movie collection interface. When connected to the Internet, info on what you’re watching, including user ratings, cover art and other trivia (cast, director, tag lines etc.) is fetched. You can then choose to add the film to your collection, adding tags should you so wish, and sync this with your online profile.


All of this is interesting and useful for those that care, but not everyone wants such integration. As such it would have been nice to have to had the option to turn this feature off, especially since it can be a little intrusive at times. A connected feature is the Movie Remix mode, where you can play around with scene ordering to create your own “remix” of a film, but this is something few will want to pay attention to: it’s pure gimmickry. 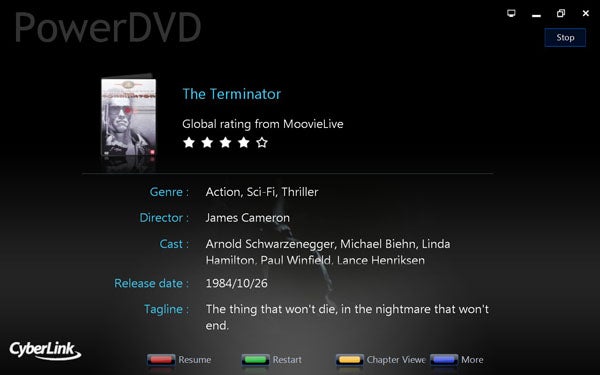 Our only other concern regarding Power DVD 9 is the pricing. While it’s easy to understand the cost of the Ultra version due to the number of licenses, if you do want Blu-ray playback this is your only option since the £30 Deluxe version doesn’t support Blu-ray. A stripped down Blu-ray version, sans HDMI 1.3 support and some of the more advanced codecs, would make a lot of sense for those that just want to watch a Blu-ray disc every now and again.


Power DVD 9 Ultra brings with it plenty of enhancements that regular PC users and HTPC users will appreciate. Its excellent Media Center integration is a particular boon and though some elements of the TrueTheatre DVD video processing engine could be deemed superfluous, the upscaling element is outstanding, breathing new life into DVDs and arguably justifying the outlay alone. 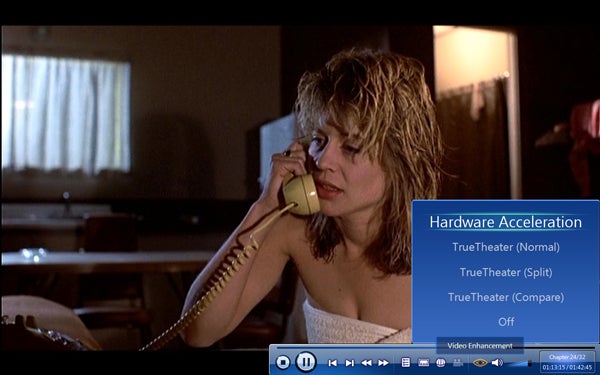 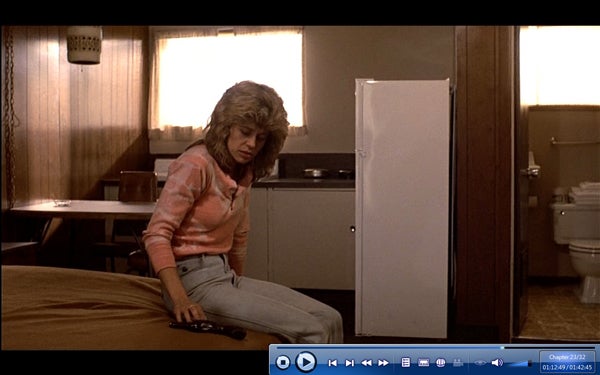 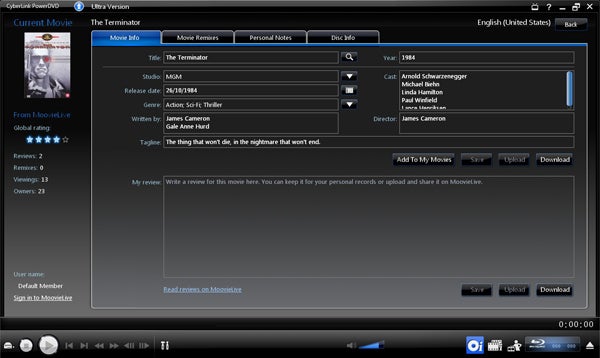 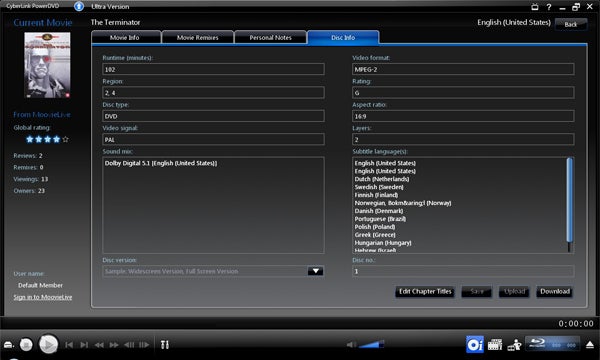