What is the Crystal Acoustics WiDaptor?

The WiDaptor adds multiroom functionality to any audio system, whatever its vintage. This bite-sized box streams music wirelessly from DLNA devices or online services such as Spotify and pipes it to your stereo system through its analogue output.

Similar to the Google Chromecast Audio, KitSound Link and Gramofon, the WiDaptor offers an easy, affordable way of creating a whole-house music system alongside Crystal Acoustics’ other WiSound speakers and WiDaptors – but with the added advantage that older audio systems can come to the party too.

The WiDaptor is a small, slim black box with curved corners and a pleasant matte finish. At 75mm wide by 17mm thick, it can be easily hidden away or discreetly placed on top of your audio system. Build quality isn’t great – the bodywork has a light, hollow feel – but that’s par for the course at this price.

On top are three LEDs that glow blue or green to indicate the unit’s power, Wi-Fi and connection status. They’re remarkably bright, to the point where you can’t see the icons above them. A USB port on the left side supports music playback from flash drives, while the WPS button on the right is used in the Wi-Fi setup process. On the back are two 3.5mm mini-jack ports – the output connects to your stereo system while the input lets you play music from portable devices (it overrides the other inputs). 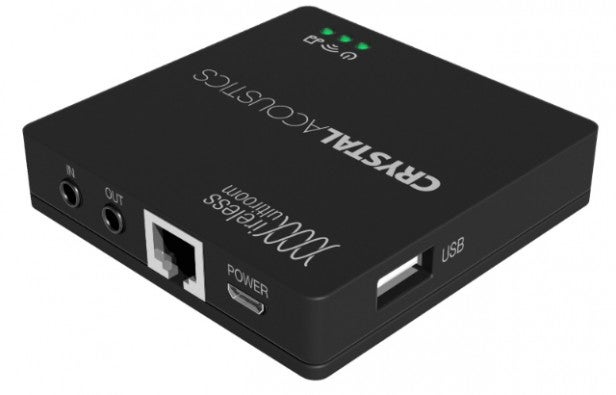 There are Ethernet and micro-USB ports, the latter powering the system when connected to the mains – using a USB plug, which isn’t supplied – or your audio system’s USB port, if it has one.

WiDaptor’s multiroom functionality allows you to play music on any number of speakers around the house, although you‘ll need a WiDaptor for each speaker. It’s compatible with the company’s other WiSound speakers such as the Cuby 9 and Teevy 6.

The WiDaptor offers impressive flexibility. You can play different tunes on each speaker, or stream the same song to them all. You can even create groups of speakers (zones) and send different songs to each one. It uses a mesh network to avoid interference from other wireless devices. 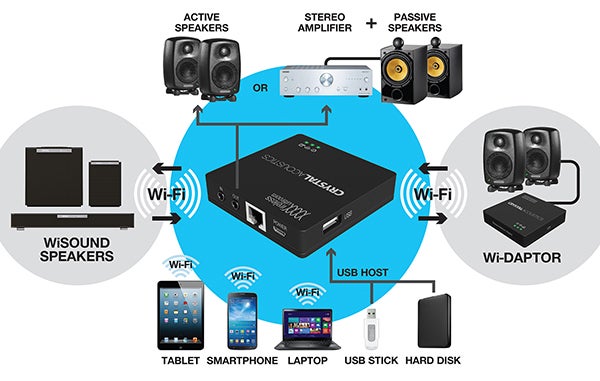 One advantage Crystal Acoustics’ system has over some rivals is that you can stream Bluetooth from a WiSound speaker such as the Cuby 9 to compatible speakers and WiDaptors on the same network.

Everything is orchestrated by Crystal’s WiSound app, available for iOS and Android devices. As well as controlling volume and playback, the app lets you access a range of music streaming services. At present it’s limited to Spotify, TuneIn radio, iHeartRadio and Pandora (not available in the UK), but Tidal and Deezer are on their way – both are listed in the “Coming Soon” section. You can also stream music from DLNA/UPnP devices on your home network, as well as any music stored on your phone.

WiDaptor also supports Apple AirPlay, making it easy to stream music from iOS devices and PCs or Macs running iTunes. That’s an impressive feature to find at this price, but oddly Crystal doesn’t make a big deal of it.

Another feature that goes somewhat under the radar is a search tool that scours a huge database of music supplied by TTPod, a free cross-platform music streaming service from China – a sort of subscription-free version of Spotify Premium.

The only notable absentee from this appealing feature list is Bluetooth, which would have been a convenient backup should anything go wrong with the Wi-Fi connection, but maybe that’s asking too much at this price.

Like most wireless speakers, WiDaptor connects to your Wi-Fi router through the smartphone app, with a series of onscreen instructions guiding you through the process. However, both of the units I tested took several attempts to connect, playing a frustrating “failed to connect Wi-Fi” message each time. 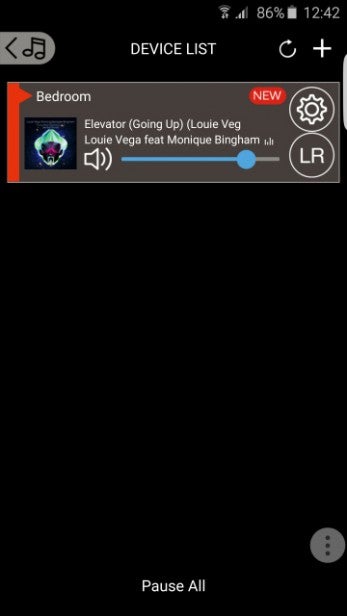 On the plus side, the WiSound app is fast, stylish and easy to follow. The Device List displays each speaker in its own panel with a volume slider and a few buttons. The cog icon takes you to the setup menu, while another button lets you listen in stereo or play the left or right channel only – that’s important if you want to use two WiSound speakers in a stereo pair.

Creating a group involves dragging one device onto another. The dragged device becomes the slave and starts playing the same music as the master. You can create multiple groups in this way, the sort of impressive multitasking found on established multiroom rivals. 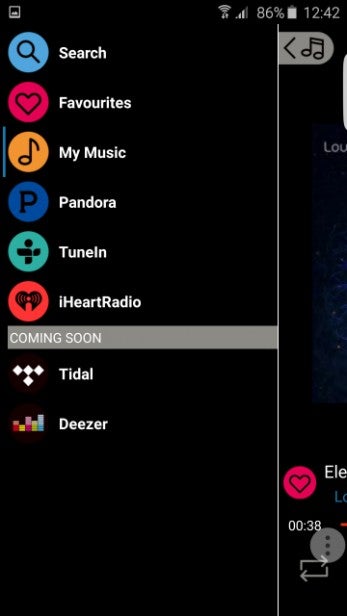 Tapping a speaker brings up a full list of music sources, including Spotify (which only appeared after a firmware update), My Music, Favourites and Search. Select My Music to find tunes on your phone, DLNA devices or USB storage. It’s all self-explanatory.

You can access TuneIn and IHeartRadio directly from the WiSound app, but when you select Spotify it switches to the dedicated app. You can then stream music using Spotify Connect, provided you have a premium account. 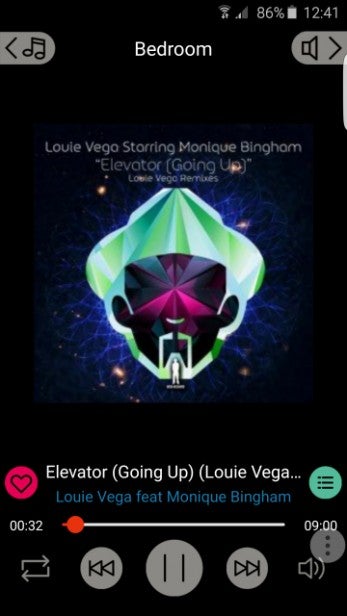 The Now Playing screen boasts a clear and friendly layout, with prominent cover art and playback controls at the bottom. You can also check the playback queue and add tracks to a Favourites list by hitting the heart icon. Two tabs at the top take you back to the source and device menus.

It wasn’t all smooth sailing though. The app shut down a couple of times without explanation, and there’s a weird circle with three dots in the middle that keeps getting in the way. You can drag it around the screen, but it serves no purpose.

Despite feeding sound through a bog standard mini-jack output, the WiDaptor delivers decent sound quality. Let’s be honest, a product such as this isn’t really gunning for the audiophile market, but casual listeners connecting to old bedroom hi-fis and ropey kitchen radios will be more than happy.

I hooked it up to my Onkyo TX-NR818-driven system and the sound is warm and well balanced, with a decent amount of attack. A good system will expose a little noise and hardness in the highs, but without my critical hat on I found its performance rather enjoyable. 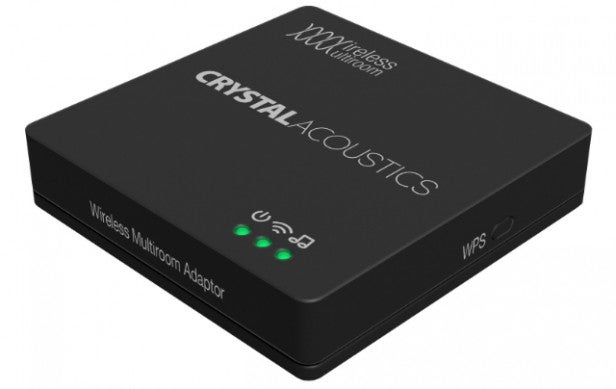 Should I buy the Crystal Acoustics WiDaptor?

If you’re tempted by multiroom audio but don’t have a limitless budget, then the WiDaptor is an affordable alternative to the likes of Sonos and Samsung. You can create a network of three or four WiDaptors for the same price as a single wireless speaker, and you don’t have to throw out your old audio systems either.

The pivotal WiSound app is thoughtfully designed and offers impressive flexibility when streaming to different speakers and zones. There’s also a decent range of streaming services – or at least there will be when Tidal and Deezer are added – and it’s easy to access music via DLNA, AirPlay, USB sticks and smartphones.

On the downside the app is a little glitchy, there were several false starts during setup and build quality is below par. For 50 quid, however, it would be churlish to complain too vociferously – particularly with so many positives elsewhere.

As an affordable alternative to expensive multiroom speakers, WiDaptor does an impressive job, adding plenty of features and wireless flexibility to stereo systems of any vintage – but setup niggles blot the copybook.