If 2010 was the year of 3D in AV terms, 2011 is arguably the year of the smart TV. For while not everyone digs the idea of turning their TV into a multimedia-savvy home entertainment centre, many ‘ordinary people’ might well appreciate anything that lets them harness Internet video and multimedia files on the biggest screen in the house without having to go near a PC.

However, the catch with the Smart TV revolution is that you have to buy a new TV, right? Wrong. LG, for instance, is still intending to launch its rather groovy external smart TV set top box at some point. But also you can get so-called ‘bridge’ products that can convert multimedia files into something that even old TVs can understand. The Crystal Acoustics PicoHD5.1 is one of these ‘bridging’ products. But it’s a rather unusual one on a number of levels. 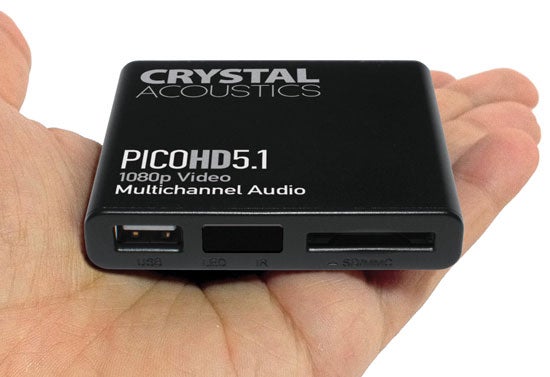 First and most strikingly, it’s remarkably small: just 7.5cm x 6.5cm x 1.5cm to be precise. And it weighs a mere 60g, despite being made from a surprisingly robust aluminium enclosure. The build quality is all the more unexpected when you consider that this potentially very handy little chap sells for the princely sum of £39.99.

Having said it’s handy, we’d better get on with laying out exactly what it does. Its connections provide a strong clue, comprising as they do a USB input, an SD/MMC card input, an HDMI output, and a mini jack output for a provided AV RCA adaptor.

At its most basic level, what happens with the PicoHD5.1 is that you stick multimedia files from FAT/FAT32 USB storage or SD/MMC cards in at one end, and they magically emerge from the other in a telly-friendly format – up to 1080p, no less – ready to be output via either the supplied composite video/stereo audio cable or HDMI.
What’s more, the 1080p output applies for all movie and photo files, whereas some rival equally-sized devices only output 1080p for photos and drop down to 720p for movie files. 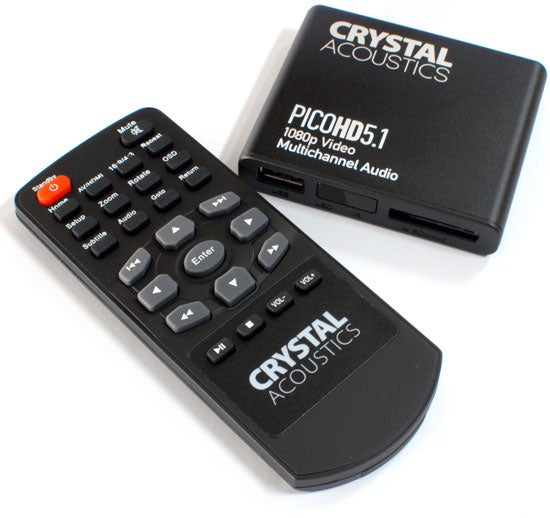 The PicoHD5.1’s most intriguing feature, though, is its 5.1 audio output (ah, so that explains the 5.1 bit of its name, then!). In fact, the PicoHD5.1 is, at the time of writing, the only product of its sort that supports 5.1 output, courtesy of a proprietary Crystal Acoustics technology that can deliver 5.1 digital signals via the white RCA cable that’s part of the supplied cable package. Couple this multi-channel digital audio with the full 1080p video support and you can see why Crystal Acoustics likes to refer to the PicoHD5.1 as a ‘home theatre that fits in the palm of your hand’.

The fact that the unit supports 5.1 audio output provides a hint of
just how wide-ranging its file compatibility is. After all, multimedia file
formats that support 5.1 audio aren’t particularly plentiful yet. For the
record – and because it is actually rather important! – here is an exhaustive
list of the files Crystal Audio says its PicoHD5.1 can handle. We’ll repeat
these in a spec box at the end of the review too, for easy reference. 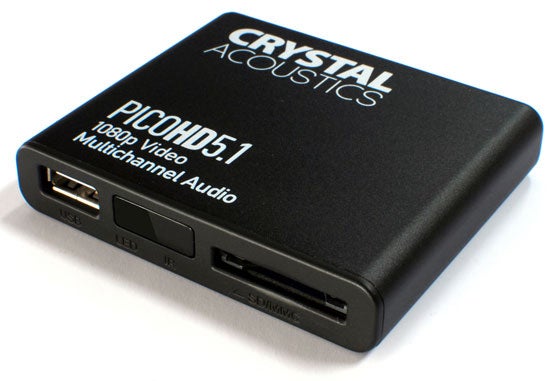 If you fancy playing music files into your TV, AV receiver or any
hi-fi with a stereo audio input, meanwhile, files supported are MP3, WMA, OGG,
FLAC, APE, AAC, Dolby Digital and DTS to stereo or 5.1 outputs.

A particularly popular use for the PicoHD5.1 is likely to be as a
conduit for getting digital photos to appear on older TVs that don’t have USB
or SD inputs on them. So it’s nice to find that as well as the usual JPEG/JPG
support, the PicoHD5.1 can also handle BMP (bitmap), PNG and GIF file formats.

The obvious limitation here is that the PicoHD5.1 can’t stream via
cable or wi-fi directly from your PC. You have to transfer files stored on your
PC to USB sticks or external hard drives first. But frankly, adding full
networking (especially wi-fi) to the PicoHD5.1 would have essentially put it
into a totally different – and much more expensive – product category. 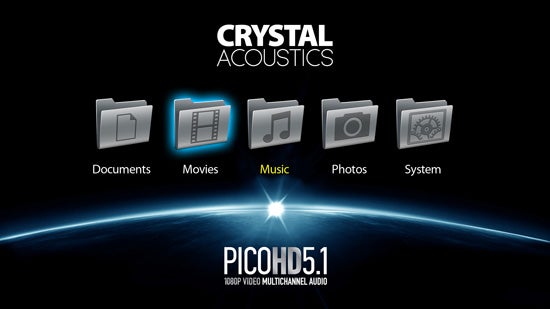 As we started actually using the PicoHD5.1, the first thing we had
to do was a firmware update. But thankfully this was impressively easy; we just
downloaded a .img file from Crystal Audio’s website, transferred it to a FAT32
USB drive, slotted the USB drive into the USB port on the PicoHD5.1, and chose
the update file from the onscreen file list.

The update apparently adds a subtitle synchronisation feature to the
unit, in case you were wondering, as well as sorting an issue that stopped the
digital audio output from working with some AV receivers.

The onscreen menus referred to back there consist of a rather
attractively designed set of folders allowing you to search through video,
music, or picture files, ‘Explore’ sources for other types of file (like the
.img one used to update the firmware), or fiddle with the unit’s Settings. Not
surprisingly, the PicoHD5.1 ships with a little remote control with which to
navigate the onscreen menus.

Due to the inevitably small size of the IR sensor on the PicoHD5.1’s front edge, it has to be said that remote control operation can be very unresponsive unless you’re sat at just the right range and height. Not ideal if you’ve got a lot of files to sift through.

The great thing about the PicoHD5.1, though, is that it does exactly what it says on the tin. First, where video is concerned, it handled absolutely everything we threw at it, including an MP4 film trailer, H.264 movies from our HD camcorder, an old bit of footage from a Canon MV700i mini-DV camcorder shoved through iMovie in the m4V format, JPEGs, GIFs, BMPs, MP3s, DivX and Xvid files… even FLAC audio, which often catches out Smart TVs. What’s more, we shoved all of these various file types onto a single USB stick, and the PicoHD5.1 had no trouble separating them all into their proper folders and parsing them ‘on the fly’. 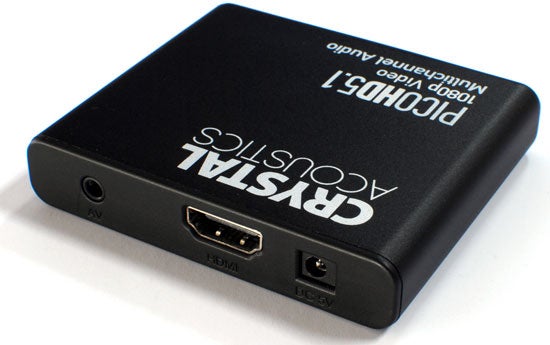 The video from all sources appeared in 1080p (upscaled if necessary) as we’d requested in the PicoHD5.1’s settings box. What’s even more surprising about this is that the upscaling system built into the PicoHD5.1 actually seems to work surprisingly well. Even when unleashed on a really quite ugly bit of standard definition home video, it delivered it at 1080p/50Hz without making it look significantly worse in terms of noise or blurring. And the upscaling is capable of making strong quality sources look slightly sharper without exaggerating noise or making the images look processed. Despite this, in an ideal world the unit might have provided an ‘auto’ or ‘native’ output setting, where the natural resolution of the source was always output. But this is a small niggle, really.

Next, there’s that 5.1 audio to consider. Two of our clips featured 5.1 tracks, one in DTS and one in Dolby Digital 5.1. And with the white lead of the provided RCA cabling connected to the coaxial input of our AV receiver, the 5.1 audio information duly arrived without glitching or lag, and actually sounding rather good.

It was also handy to find that as well as supporting slideshow playback of any photos you feed it, with the option to adjust the interval between photos, the PicoHD5.1 also lets you rotate and zoom in on pictures.

The only issue we had with the unit aside from the narrow angle of remote control reception was that it populated the content lists with curious, unplayable ‘ghost’ secondary versions of the actual files.

At just a penny under £40 the PicoHD5.1 is an absolute steal for a media player with 1080p video and extensive format support. The only player that comes close in terms of value is the Seagate FreeAgent GoFlex, which offers networking and more connectivity for just £11 more. Still, if you’re after a media player that fits in your pocket, the PicoHD5.1 is an unrivalled option.

Although its remote control problems and ‘ghost’ file issues detract from the cleverness and slickness of everything else about the PicoHD5.1, it’s still a terrifically useful little device. After all, as well as bringing multimedia capabilities to old or cheap TVs, its diddy dimensions also make it a brilliant device to take with you on your travels, allowing you to watch material from a variety of media on the TV in your hotel or holiday cottage.