If games were sold like detergents, Crysis Warhead would have been called Crysis Concentrated. This is fundamentally a heavily focussed, super-strength version of its predecessor that proves that a little Crysis can actually go further than a lot. 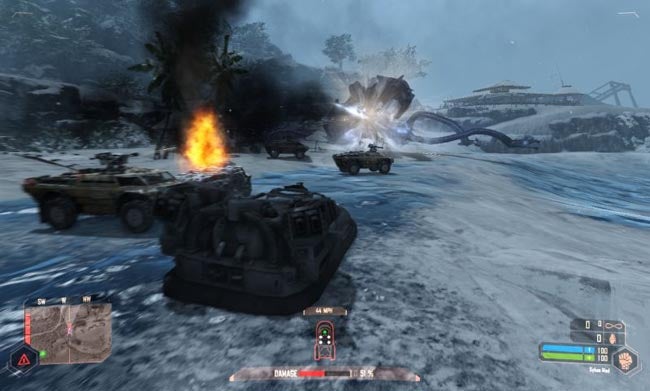 It’s a Crysis without all the dull bits. There is less time racing around vast environments, not being 100% sure how to get to the next objectives, while half the North Korean army (not to mention several irritating helicopters) hound you without mercy. There is less time where you feel like you’re suddenly stuck in a lesser alien-blasting FPS while dull extra-terrestrial entities bob around. This is still a spectacular Crysis, still a bombastic and hugely macho Crysis, but it’s also a more refined and exhilarating Crysis this time round.


The island setting is the same, and the story still revolves around the same events we’ve seen in the original Crysis. In Warhead, however, the protagonist is Sykes – affectionately and accurately known as Psycho. He’s the gritty Brit special forces agent you probably tried to ignore in the cut-scenes last time around. 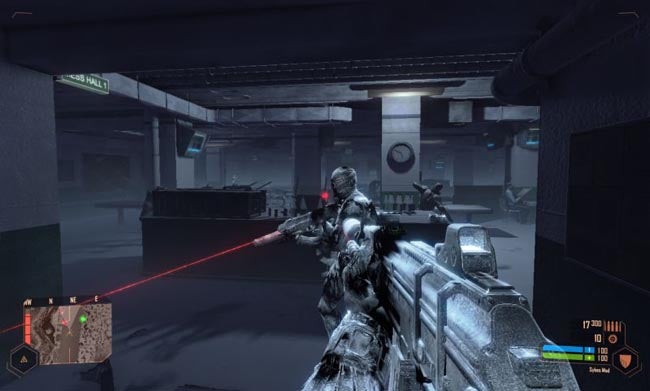 Having survived the disastrous early stages of that mission, Sykes kicks off as a one-man army attacking North Korean outposts, but soon gets caught up in a search and recover mission centred on a mysterious container. This is what Hitchcock would have called a Macguffin – the object that provides Sykes with the motivation he needs to run through a series of levels, racing from objective to objective to objective to objective.


And this is where Warhead gets interesting. While it pains me to say it, Crysis was sometimes a bit too open, leaving you with patches of exploration or navigation where you fumbled around in search of a route to the next objective, enlivened only by the occasional outpost or patrol. 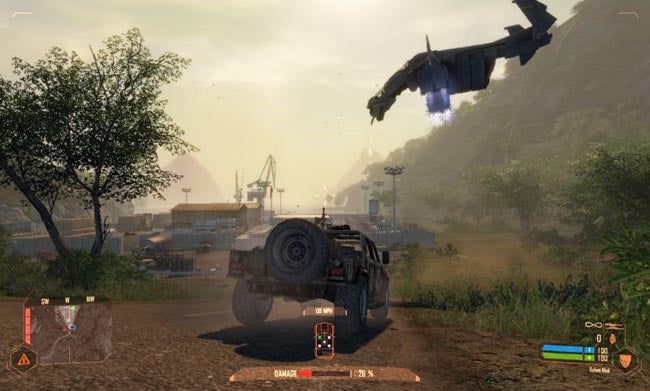 Warhead follows its predecessor in always giving you room to explore and a whole host of ways in which you might tackle any given situation, but at the same time it uses objectives and geography to provide you with a clear, central path from A to B. Partly as a result, it feels more orchestrated, with each battle flowing on neatly to the next, and the sense of danger (and the difficulty level) steadily ramping up as each chapter pushes towards a natural climax. As a result, there’s hardly any dead time. Warhead is all balls-to-the-wall action, all the way.

There’s also a sense that Crytek is more in control of the overall structure this time around. Arguably, Crysis – like Far Cry – lost its way a bit two-thirds of the way through. The aliens and the frozen landscapes made for some impressive spectacle, but the action wasn’t as exciting as it was when it was just you against the North Korean troops.


In Warhead the aliens are brought in earlier on and they prove much more challenging, working efficiently in groups and behaving more aggressively, even outflanking you or swarming you on occasion. The game also plays smarter in its three-way conflict, providing more battles between Nanosuited North Korean and US forces, US forces vs alien invaders and – best of all – scraps involving all three parties. 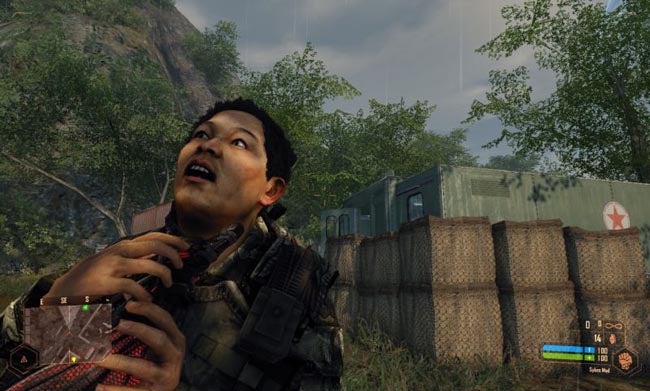 Make no mistake: this isn’t a game where you can grumble about the lack of set-piece encounters. It would be enough that Warhead repeats the Half-Life 2 trick of making vehicle-based sections interesting. In fact, there’s a chase sequence involving a hovercraft that’s actually downright thrilling. Yet Warhead goes further – mixing up large, open battles, fights in constricted spaces, bold assaults and last-ditch defences with real aplomb.


There are some stunning examples of what you might like to call boss battles, and yet never in any of this do you feel that you have to do things in the one approved way. If you want to ditch the hovercraft and take that whole level on foot, tackling each enemy on your way, then you’ll find it hard going but you should be able to do it. This is without a doubt the most continuously excellent work of FPS level design we’ve seen since Call of Duty 4 and Half Life 2: Episode 2. 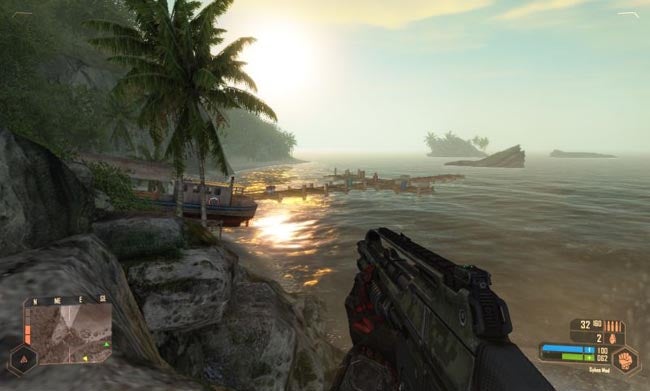 And Warhead also does what I think nobody expected it to do: it actually trumps Crysis for visual spectacle. Now, I’d take some of the talk of lower system requirements with a pinch of salt. Last year, my – at the time – state of the art gaming system (a Core 2 Extreme 6850 with a Asus Geforce 8800 Ultra) coped with Crysis at 1680 x 1050 on high detail levels. The same machine struggled with Warhead at the equivalent settings without a drop in resolution to 1280 x 720 and anti-aliasing switched off. That said, it’s worth having the fastest system you can get.


If Warhead ‘only’ had all the lovely, photo-realistic effects we saw last time around it would still be one of the best looking games on any system, but this time Crytek has worked harder to produce jaw dropping scenery or weird vistas that make strange juxtapositions of the tropical environment, military hardware and the alien ice. Interior sections that might have been drab are enlivened by fantastic lighting or gorgeous little details. It’s safe to say that Warhead is a new benchmark by which all other FPS games must be judged.

Admittedly, all this goodness comes at a cost, and that cost is size. Where Crysis was a lengthy game, Crysis Warhead can be whistled through in around five or six hours, depending on your approach and the number of secondary objectives you opt for. To counter this, EA has released it at a bargain £20 (and you can easily get it for less online) and it is a really, really good five or six hours that you’ll probably be happy to repeat at a higher difficulty level. 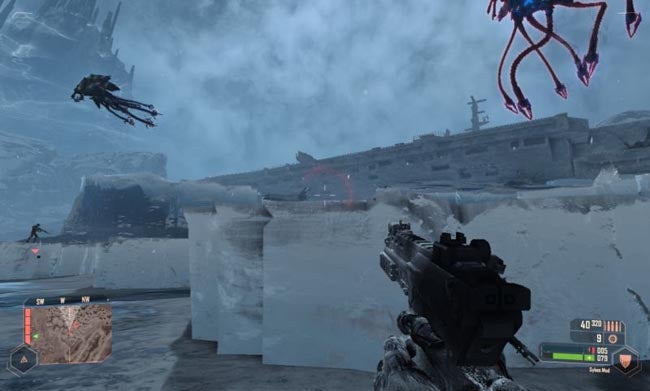 To bolster the value for money aspect even further, Warhead also ships with Crysis Wars: an enhanced version of the Crysis multiplayer client. The deathmatch-style InstantAction and the more complex team-based Power Struggle return, but now they’re joined by TeamInstantAction – a more accessible team-deathmatch mode – plus 21 new maps across the three modes. Will this work to elevate Crysis to the level of Call of Duty 4 as a multiplayer game? Probably not, but it certainly makes it a contender for the odd quick blast and – who knows – maybe more players will make more use of their nanosuits this time around? 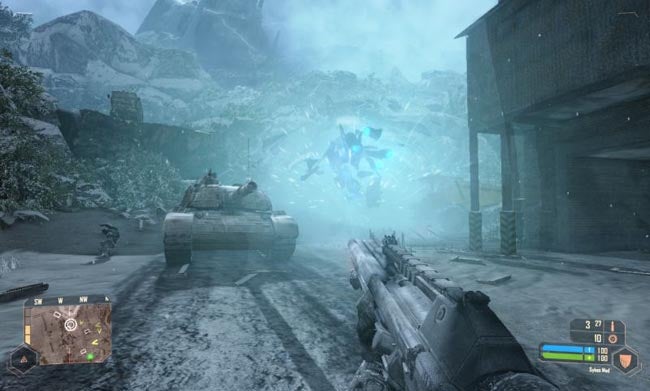 Even given the short length, this is a must-have for any serious PC gamer. This hasn’t been the best year so far for FPS games, but Warhead is so far above every other recent entry in the genre – on any system – that it’s practically ridiculous. It’s the concentrated crème de la crème de Crysis at a bargain basement price. Really, what else do you need to know?


It might be short, but Warhead gives us the juicy, rare steak of Crysis without any of the excess fat. Absolutely essential.