Available on PC (version tested), iOS
Crush Your Enemies talks a big game in its Steam product description. Going “back to the days when you thought real-time strategy games were awesome” and a “story filled with Naughty Humour: So your momma won’t mistake the game for her favourite Medieval Village Clickfest!”.

Not surprisingly, it fails to deliver on any front. Its desire to represent this man’s world of barbaric neanderthals has led to some horrendously unfunny and at times offensive dialogue that drags down an already boring and frustrating one-trick pony.

You play as Brog the Barbarian chieftain, who leads his army across the land of Generia with only one goal: Crush Your Enemies. Early on you’ll capture a prisoner from your sworn enemies, the Pansies (yup), in the form of Prissy LeFop (I know). What follows is a series of horrendously unfunny cut-scenes, some of which border on the offensive. 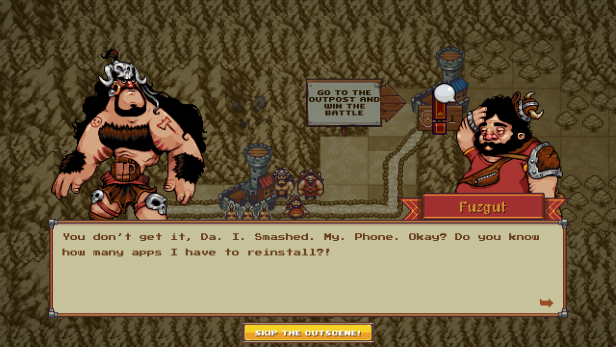 The script is simply intolerable. It feels as if this was written among a group of “lads”, laughing hysterically at their grade-A “bants”, only for it to be handed to someone outside of the room to discover it offends many.

Even the straight attempts at humour fall flat, with Fuzgut saying he’s broke his phone, weeping at the thought of having to download all the apps again, or preferring to play Warhammer than actual war. There are better laughs to be found in Christmas crackers.

Gameplay-wise, it’s real-time strategy adopting a simplistic control system to keep the focus on player-driven choice and action. Sounds appealing, right? Well, the problem is the whole system becomes boring through its simplicity.

Controlling barbarian troops you must complete a series of progressively more challenging stages by defeating every enemy (or “Crush” them). There are recruitment tents to improve your numbers, and other specialist tents to convert ordinary infantry into warriors, archers and so on.

There’s also a “beer economy”, where taking control of select locations earns you booze – the game’s currency – to spend on buffs to help turn the tide of combat. 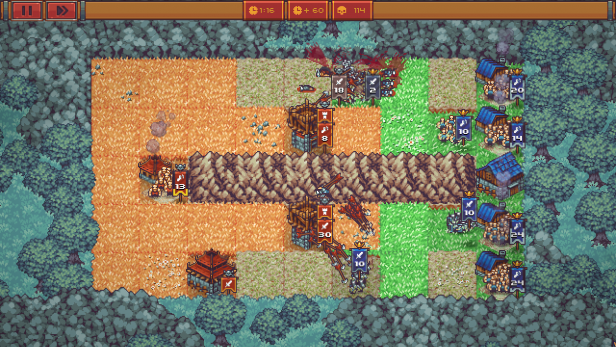 Crush Your Enemies offers a comprehensive set of tutorial levels to introduce you to all the basic mechanics, which are all laid out well – offensive bad dialogue aside. Trouble is, once the training wheels come off, there’s such an aggressive difficulty spike that you’ll think you’ve skipped a few lessons.

The odds begin to be tipped drastically in the AI’s favour: they’ll start with more recruitment tents than you, have more land, and with it you’ll be left with a complete sense of helplessness.

It feels as though you’ve had one training session then been slung in with the pros. The buffs help alleviate some of the strain, but due to their limited availability and also the fact they only work for a small amount of time in a level, you could end up expending your whole inventory and still fail the mission.

The challenge feels so unfairly weighted that you’ll face almost insurmountable odds and, because of the simplicity of the game’s mechanics, feel as though you lack the tools to overcome the task in front of you. 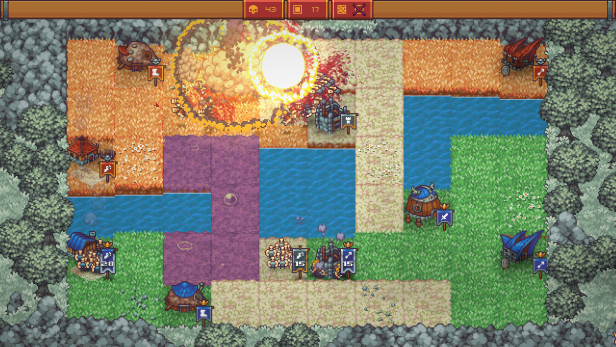 Some missions you’ll restart within a few moves because you know the battle is already lost. This isn’t like other strategy games where errors can be compensated for or made up for with other decisions. Since the game is so basic, one false move in the opening seconds could mean curtains – and it ruins the fun of the experience.

When you feel in control, the game can be fun. Choosing where to send your troops, and how many of them, in order to stand the best chance of winning and completing as many of the three objectives along the way adds some variety. However, with the punishing difficulty that often feels unfair, and having so few tools to control and change the outcome, you’ll very often be restarting levels to the point that you’ll just end up quitting altogether.

Horrendous dialogue, overly simplistic controls and mechanics make for a terrible adventure for Brog and his Barbarians. Although it’s admirable to make a simplistic RTS, doing so completely strips any ability for the player to overcome the unfair odds that the game presents as soon as the tutorials come to an abrupt end.

The fact that gameplay is connected by a series of unfunny and offensive cut-scenes makes this one to avoid.