Though we’re often telling you about the latest and greatest in notebook computing, it’s not often that we find the time to recommend something to carry them around in. And, when you think about it, finding the perfect laptop bag is just as important as the machine itself, especially for those regularly on the move. So, let us put this wrong partially right by taking a look at a recent addition to the Crumpler laptop bag line, the Righthand. 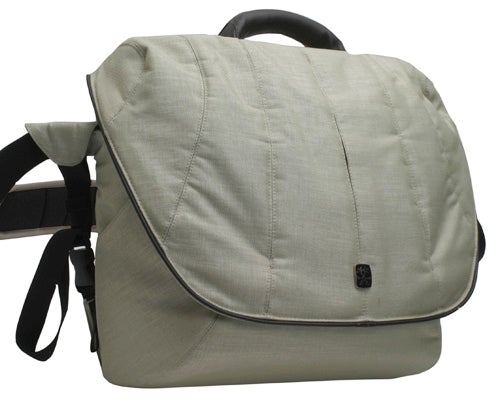 Now, Crumpler is a name that’ll be familiar to a great many people. Renowned for a long time for its excellent line in camera bags; it has equally long been associated with laptop bags and plenty else besides. More often than not its offerings are also very colourful and individual and though this is great for us Average Joe’s, those who spend more time in an office may be laughed out of employment for turning up with a bright yellow bag with orange accents. Thus, for those that Crumpler terms “pinstripe, pencil pushing, pointdexters who were getting stroppy about our strappies” it has produced the more restrained Righthand.


It comes in three varieties: the Oatmeal and Dark Brown Leather version we have here, a Dull Black/Grey edition and a more colourful Firebrick Red/Dark Red. It’s a messenger style shoulder bag that can carrying notebooks up to 15.4 inches wide, while also providing plenty of space for an assortment of tools and accessories, including chargers, spare batteries and the like. All this space does mean it’s not the smallest bag about, measuring 43cm across and 35cm tall, but versatile it certainly is. 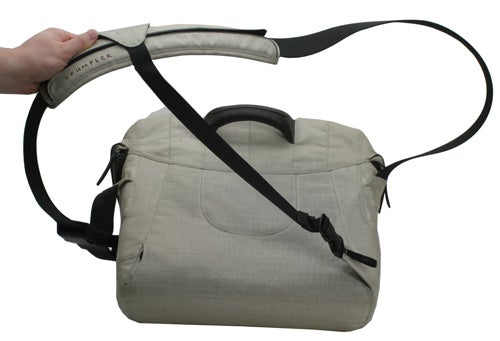 It’s also very strong. As with most of Crumpler’s bags it is made from its Chicken Tex Supreme fabric, which is waterproof, very resistant to wear and tear and provides a decent level of protection for what is a soft fabric bag. Indeed, we’d say it’s about as protective as you’re likely to find short of actually buying a hard case bag, or a Panasonic ToughBook for that matter.

This sense of rugged quality is consistent throughout. One look at the shoulder strap buckle tells you it’s as solid as rock, providing a firm hold that will never fail – probably. Another interesting feature regarding the strap is what Crumpler calls the ‘Third Leg’, an extra strap that clips onto the bag to create a seatbelt style arrangement that fixes the bag firmly on your back and relieves the weight from your shoulder. It’s perfect when travelling long distances and particularly useful when cycling.


It has its own sense of style too. Fine, it might not be as funky or fun as some of the company’s other offerings, but the quality of the construction is clear to see and adds a certain level of gravitas. Some leather piping is also a nice touch, while the leather bound handle is very useful and also gives a hint as to the bag’s more formal credentials. 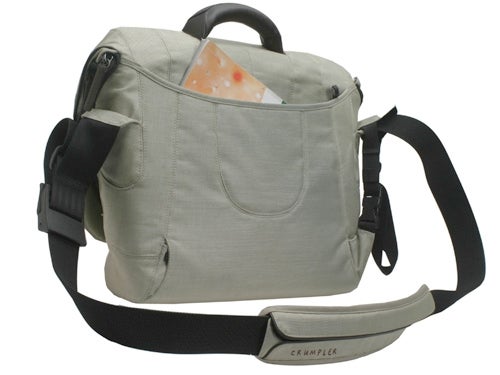 Before taking a look inside it’s worth noting that unlike a lot of messenger bags the Righthand employs a zip mechanism for opening and closing the flap. This provides great security since it’s impossible for someone to slip their hand in there without you noticing, though it equally makes opening a lot more difficult. Indeed, this is definitely one of the more annoying points about the Righthand, because the zip can be tough to operate at times, especially when trying to close.


This is caused in part by how the flap segment folds over, creating an awkward angle that requires some teasing and occasionally brute force to get through. Over time this does become easier as the fabric becomes more flexible, but it does mean that the Righthand isn’t great as an instant access bag, being rather more like a briefcase replacement. One thing you needn’t worry about, though, is breaking the zip. No matter how much stress we put on it, it remained perfectly intact and it’s another indicator of the build quality that comes with the Crumpler name and the fairly substantial price – more on which later. 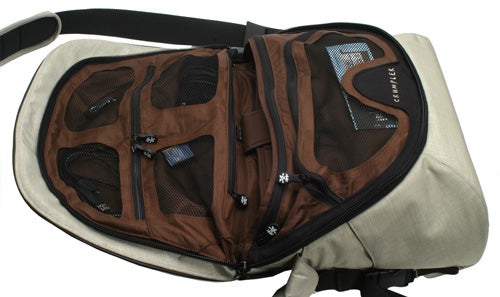 Another small niggle is the shoulder pad. It’s very large, spreading the weight well; however, there isn’t as much soft padding as we’d like and it can start to feel uncomfortable after carrying the bag for prolonged periods of time. Naturally, to an extent this is where the ‘Third Leg’ comes in, but sometimes this isn’t always convenient to use, especially if you’d rather not be ‘strapped into’ your bag.

Still, once you take a look inside you’d be forgiven for forgetting such worries because the Righthand is positively brimming with smart storage spaces and compartments. In the main body there’s the main laptop sleeve, which is padded and, when combined with the already strong exterior, provides ample protection from both external pressure and anything inside the bag. Alongside this there’s a roomy compartment for generic items such as pads of paper, which is also perfect as a storing space for a spare notebook battery. 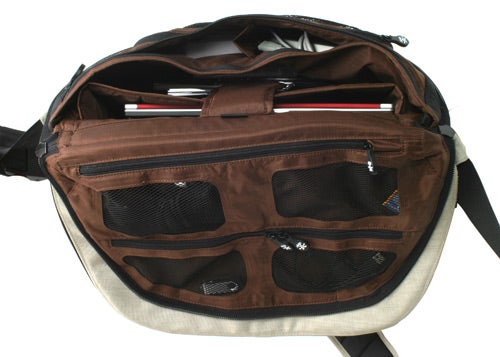 On the flap you’ll also see a great selection of zip sealed compartments. Perfect for compact cameras, MP3 players and other smaller items it is in this respect that the Righthand excels, providing a flexible and well organised space in which to store all your paraphernalia. There are yet more compartments in the main body of the bag too, with one smaller mesh covered one on the front and a large enclosed one that’s separated into two. Meanwhile, on the outside of the bag there’s one further zip sealed compartment for magazines and papers, though it is a bit of tight fit at times.


So, for the most part the Righthand is a very well designed bag. However, as we hinted at earlier, it comes at a high price since the Righthand will cost you around £110 and perhaps more depending on where you shop. Now, for sure, this is a case of you get what you pay for and the construction of the Righthand is undeniably superb, but for that price we’d really expect perfection and the Righthand doesn’t quite offer this. 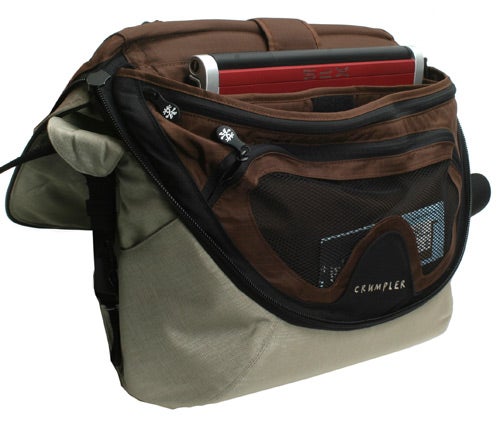 In particular the problem of the overly tough zip mechanism is a real issue and though it does loosen somewhat over time, it doesn’t become any less annoying and is the sort of issue we wouldn’t expect to see in a bag costing over £100. It’s a shame too, because in most other respects this makes for a great laptop bag. It’s smart looking without being dull and we particularly like the Oatmeal colour, while the storage options and build quality are exceptional.


As a briefcase alternative the Crumpler Righthand is a great option. It’s smart and formal but not without style and offers great build quality and storage options. However, an overly tough zip mechanism and high price serve to dilute its appeal. If you can swallow the price and put up with the zip, though, it’s certainly worth considering.